Fourth stimulus check for $600 to $2,000 could be negotiated in November 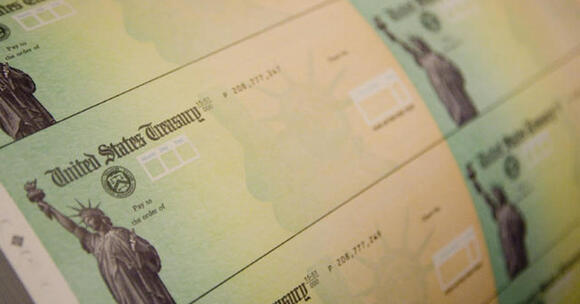 Can a fourth stimulus check be negotiated and passed in November?

Federal unemployment programs have ended, and while the economy rebounds – it’s returning to ‘normal’ at a slower-than-expected pace. Calls for a fourth stimulus check have also grown louder as prices and inflation continue to rise – putting families at risk of poverty again.

The current form of the Democrat-led reconciliation bill does not include another round of stimulus checks. However, modifications to that bill next month before another debt ceiling increase debate in December could mean additional stimulus payments.

But how much? And for who would a fourth stimulus check be delivered?

There have been several stimulus checks issued over the last 20 months. However, most of those were sent out by the IRS when unemployment was significantly higher. The unemployment rate in the early days of the pandemic was over 14% as states shut down to prevent the spread of COVID-19.

Republicans are expected to push back even harder against another round of stimulus checks for the same reason that Democrats support them. As inflation rises – Republican lawmakers argue that additional money will cause inflation to increase. Democrats say that it will be the difference between families making ends meet – or not being able to do so.

A petition to send $2,000 monthly payments to most Americans until the end of the pandemic has more than 3 million signatures now. While that has gained a lot of support across the country – it hasn’t gained much momentum among lawmakers. Even the most progressive pockets of the Democratic Party in Congress have failed to grow support for $2,000 recurring payments.

They need to stop with all of the lies about us getting $2,000 stimulus check and $2,000 monthly until the covid_19 is over. More than children need money. People on Social Security, SSI,etc. We need Money as well. Get it passed, signed and send it. Times are getting harder. Stop playing around for real

Absolutely Johnny and Lucille. Our government would rather support the immigrants and other countries than us Americans. Us people that is on disability and SSI has gotten harder as time passes. Everything is going up. But this raise we are getting at the beginning of the year, it doesn’t matter, cause everything is going to get more expensive. So our raise, is not going to make any difference. We are going to be the same if not worse off. And I agree, stop worrying about the other countries and worry about our own country. The republicans doesn’t care, they can buy anything they want to, they don’t have to worry about struggling like we do, so quit lieing to us. Don’t say anything until it is either passes or doesn’t pass. But all I am saying is us Americans needs help.

all Americans need the money not just certain people. talking about grocery store workers. What about the people shopping at those grocery stores.

Payouts: Find Out Whether You’ll Get a $2,000 ‘surprise’ Stimulus Check.

AMERICANS in certain states may receive a surprise stimulus check just before Christmas. President Joe Biden’s American Rescue Plan includes incentive payments. Only citizens of 14 states may get them. Some of these states already have benefit schemes for recipients of stimulus funds. In the absence of a fourth federal...
ECONOMY・2 DAYS AGO
Newsweek

Fourth Stimulus Check Update: Some Americans Will Be Eligible for $1,400 Payment in 2022

Payments will be issued after a person files taxes in 2021.
INCOME TAX・16 HOURS AGO
Business Times

While there are no plans for a fourth stimulus check for Americans, a huge number of people will be eligible for funds distributed in 2021. According to Fortune, eligible parents of 2021 newborns will receive another $1,400 stimulus check when they file their tax returns next year.
ECONOMY・1 DAY AGO
FingerLakes1.com

Which Americans are getting a $300 stimulus payment this weekend?

20,000 Americans can expect a $300 direct stimulus payments this weekend. These payments will go to low income families in Santa Ana California. Thanks to the Revive Santa Ana Resident Stimulus Program, $6 million dollars is stimulus aid will be given to families that need it the most. The eligible...
ECONOMY・1 DAY AGO

Residents in Maine may qualify for a stimulus check worth $285 or more before 2022. These surprise payments were announced in Nov. As part of the Maine Disaster Relief Program, checks worth $285 or more will go out to over 500,000 workers impacted by the COVID-19 pandemic. The budget is...
ECONOMY・1 DAY AGO
bigblueunbiased.com

More Than $1000 in Stimulus Checks Are Expected for Americans

Americans might receive a $1,000 or more check in the coming weeks as political leaders unite around a daring proposal to avert a deeper recession and keep households from going bankrupt. Sen. Mitt Romney (R-Utah) proposed on Monday that every American adult receive a $1,000 payment “immediately” to help tide...
U.S. POLITICS・1 DAY AGO
FingerLakes1.com

These 5 states and cities are giving out up to $2,000 in stimulus payments and Universal Basic Income, is one yours?

Five states in the country are going to help out struggling residents with UBI or stimulus checks worth up to $2,000 in 2022. Universal Basic Income, or UBI, is a recurring payment that can happen monthly, weekly, or annually. Stimulus payments have been a one-time payment. Though there have been...
POLITICS・16 HOURS AGO
Motley Fool

Stimulus Update: What Happens to Monthly Payments if the Government Shuts Down?

Would political infighting lead to missed enhanced Child Tax Credit payments?. The Child Tax Credit is working, lifting millions of children out of poverty. A government shutdown would not have had an impact on the December payment. In September, Congress kicked the can down the road by passing a spending...
CONGRESS & COURTS・15 HOURS AGO

Social Security payments will see a 5.9 percent increase in 2022. This will be the highest boost offered in over 40 years. Understandably, the increase is due to the inflating costs of goods.This implies that a fourth stimulus check 2022 might be critical to families. In October, the Social Security...
ECONOMY・4 HOURS AGO
theeastcountygazette.com

Presently that the last month of 2021 is here, an extraordinary year-long range of transferring billions of dollars to Americans in the kind of stimulus amounts is at last illustration to a conclusion. Gratitude to the six child tax credit stimulus checks, tens of millions of Americans received as numerous...
PERSONAL FINANCE・1 DAY AGO
Republic Monitor

Will There Be Fourth Stimulus Check as the COVID-19 Omicron Variant is Making a Headline?

Long after COVID first crippled the economy in early 2020, the pandemic persists. The Omicron variant is now making headlines, while the Delta variant continues to cause positive cases, albeit at a reduced rate. President Joe Biden has taken a more aggressive stance in promoting vaccinations, according to CBS Baltimore.
BUSINESS・2 DAYS AGO
FingerLakes1.com

If the government shuts down could that impact December Social Security checks?

If the government shuts down, then any government service that isn’t essential will halt. This would not be the first government shutdown, and it’s happened when Congress misses the deadline for passing annual spending bills. President Joe Biden signed something called a stopgap funding bill back in Oct. to avoid...
U.S. POLITICS・2 DAYS AGO
chronicle99.com

The US citizens should expect the latest round of stimulus checks soon. Congress has announced that that was were eligible will receive the payment every week. The financial assistance is aimed to help the adults who suffered severely during the pandemic. The dependents of the individuals will receive benefits as per the parameters set by the government. According to an article of THE US Sun published on November 28, the latest rounds of IRS stimulus checks will conclude on the last day of 2021.
INCOME TAX・3 DAYS AGO
Republic Monitor

Is There A Fourth Stimulus Check For Social Security Beneficiaries? Find Out Here

Retirement and survivor’s benefits, as well as those who have lost a spouse or an eligible ex-spouse, and benefits for the disabled are all covered by the Social Security system, which in the United States is officially known as OASDI, according to Investopedia. As inflation continues to rise, the Senior Citizens League is urging Congress to provide Social Security recipients with a $1,400 fourth stimulus check.
BUSINESS・3 DAYS AGO
GOBankingRates

Government Shutdown 2021 Update: How Could a Default Affect Interest Rates?

Now that a government shutdown has been averted -- for now -- the next focus is the potential threat of the U.S. defaulting on its debt, and the impact it can have on interest rates. The Treasury...
U.S. POLITICS・6 HOURS AGO
The Staten Island Advance

STATEN ISLAND, N.Y. -- While there’s no talk of a fourth stimulus check for Americans, there’s a large group of people who will become eligible for money that was distributed in 2021. Parents who gave birth to a child in 2021 will be eligible in 2022 to receive payments up...
STATEN ISLAND, NY・2 DAYS AGO
FingerLakes1.com

California residents can expect their second round of stimulus checks to be sent this week, 803,000 to be exact. The checks total about $563 million and started going out Nov. 29. 800,000 checks totaling $561 million were sent according to The Sun. There are also 3,000 direct deposits this round...
PERSONAL FINANCE・2 DAYS AGO
theeastcountygazette.com

When it comes to stimulus payments, many Social Assistance beneficiaries wonder whether they will qualify for them and need to take any action as the fourth round of stimulus money begins to be disbursed. Fortunately, the IRS has helped clear up a lot of the confusion, so if you’re stumped and looking for answers, we’ve got you covered.
BUSINESS・4 DAYS AGO
FingerLakes1.com

What is the CSRS retirement increase for 2022 with the COLA increase?

In Oct. it was announced by the Social Security Administration that there would be a 5.9% increase for the COLA adjustment in 2022. The last time it increased that much was almost 40 years ago. These changes have pushed people to call on lawmakers to make federal worker’s retirement systems...
BUSINESS・13 HOURS AGO
LehighValleyLive.com

Will there be another stimulus check in 2022?

At this time, the Biden administration is not releasing a fourth stimulus check in 2022 and is instead choosing to focus efforts on the enhanced Child Tax Credit and The American Rescue Plan. But some members of Congress and a good portion of the public have shown support for additional...
U.S. POLITICS・3 DAYS AGO