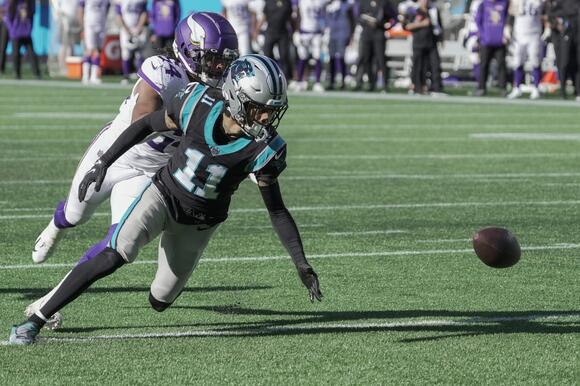 Discover player props odds, plays, and insights for Robby Anderson in his Week 7 contest with the Carolina Panthers against the New York Giants.

Robby Anderson will have several player prop bet markets available when he takes to the field on Sunday at 1:00 PM ET live on FOX. Anderson and the Carolina Panthers (3-3) hit the field against the New York Giants (1-5) in Week 7 at MetLife Stadium.

The 2021 NFL season is officially underway and Week 11 delivered a mixed bag of defensive performances across the league.
NFL・1 DAY AGO
San Diego Union-Tribune

Check out odds, plays and more for the Carolina Panthers vs. Miami Dolphins NFL Week 12 matchup on November 28, 2021.
NFL・2 DAYS AGO
Sports Illustrated

Check out odds, plays and more for the Philadelphia Eagles vs. New York Giants NFL Week 12 matchup on November 28, 2021.
NFL・2 HOURS AGO

Check-in here throughout the year for the NFL games today full weekly schedule. Including links to Sportsnaut’s season forecasts for
NFL・1 DAY AGO
Sportsnaut

Can the Tampa Bay Buccaneers win back-to-back Super Bowls? Find out how the 2021 schedule sets up nicely for Tom Brady and Co. to make another title run.
NFL・13 HOURS AGO
The Spun

Adrian Peterson Has A 2-Word Message For The Titans

Welcome to Tennessee, Adrian Peterson. The legendary NFL running back is reportedly signing with the Titans, following the Derrick Henry injury news. Henry is reportedly undergoing surgery on an injured foot. While it’s possible he could return later this season, Henry is expected to miss several weeks, if not the rest of the regular season.
NFL・25 DAYS AGO
The Spun

On Thursday night, the Atlanta Falcons hosted the New England Patriots in a matchup between playoff contenders. Atlanta hasn’t looked like the best team all season, but the Falcons entered tonight’s game in the thick of the wild card race. However, after tonight is over, the Falcons will likely be on the outside looking in.
NFL・8 DAYS AGO
FanSided

The fallout from Aaron Rodgers testing positive for COVID-19 after previously saying he was immunized after declining the vaccine has cost the Packers quarterback a sponsorship. It was a personal decision by Aaron Rodgers to not get the COVID-19 vaccine. It’s not one that hasn’t cost the Green Bay Packers...
NFL・20 DAYS AGO

As Lamar Jackson’s illness worsens, who will start at QB for the Ravens vs. the Bears?

An alarming development out of Baltimore: Lamar Jackson has been added back to the Baltimore Ravens’ injury report with a non-COVID-19 illness and is officially questionable for Sunday’s game against the Chicago Bears. The Ravens updated Jackson’s status Saturday afternoon. Lamar Jackson questionable vs. Bears. Jackson had missed practice Wednesday...
NFL・6 DAYS AGO
The Spun

The Baltimore Ravens didn’t make any notable trades last week, but it reportedly was not for a lack of effort. According to a report from NFL.com insider Ian Rapoport, the AFC North contenders made several notable inquiries, including one big one with an AFC East franchise. Rapoport reports that the...
NFL・19 DAYS AGO
ClutchPoints

In what was inevitable for days, the Los Angeles Rams elected to waive veteran wide receiver DeSean Jackson on Tuesday. The Rams and Jackson reportedly mutually agreed to seek a trade partner ahead of Tuesday’s NFL trade deadline. The Rams failed to find a suitor for Jackson and although he reportedly was open to staying with the team for the remainder of the campaign, Los Angeles still opted to waive him earlier this week.
NFL・22 DAYS AGO
On3.com

Former Green Bay Packers quarterback Brett Hundley signed on to the Indianapolis Colts practice squad on Monday. Hundley has been moved on and off the active squad with the Colts this season, as they deal with an evolving quarterback situation. The UCLA product was drafted by the Packers in the...
NFL・25 DAYS AGO
The Spun

Less than 24 hours before kickoff, the New Orleans Saints made a plethora of moves to their active roster. The most notable move features wide receiver Kevin White. Nick Underhill of NewOrleans.Football announced on Saturday that White has been waived by the Saints. Veteran cornerback Ken Crawley was also waived this afternoon.
NFL・6 DAYS AGO
The Spun

For the past three weeks, Saints running back Alvin Kamara has been sidelined with a knee injury. While there’s no clear timetable for his return, the All-Pro did just post a cryptic message on Twitter. Moments ago, Kamara tweeted “I’m on it.”. There’s no telling if this is Kamara’s way...
NFL・17 HOURS AGO
NBC Sports

Dallas Cowboys defensive tackle Trysten Hill took out his frustrations from Thursday’s loss to the Las Vegas Raiders on one of his opponents after the game. In a segment on ESPN, video was captured of Hill delivering a punch to Raiders guard John Simpson as the two teams mingled on the field after the game. The punch to Simpson sent his helmet flying off his head with Simpson and Raiders defensive end Maxx Crosby immediately moving to confront Hill in the aftermath.
NFL・1 DAY AGO
Sports Illustrated

Check out odds, plays and more for the Tampa Bay Buccaneers vs. Indianapolis Colts NFL Week 12 matchup on November 28, 2021.
NFL・3 DAYS AGO