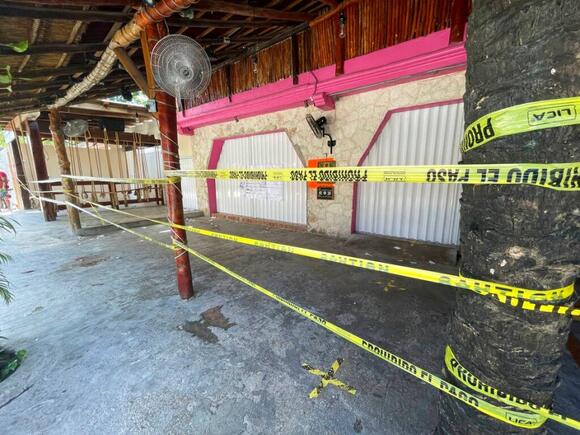 A San Jose, California woman born in India was one of two foreign tourists killed in the apparent crossfire of a drug-gang shootout in Mexico’s Caribbean coast resort of Tulum.

Authorities in Quintana Roo, the state where Tulum, Playa del Carmen and Cancun are located, said one of the dead women was Anjali Ryot.

An Instagram account under the same name showed a post of Ryot lounging and smiling on a seaside pier in Tulum two days ago. It listed her as a travel blogger from Himachal, India, living in California. A linked Facebook page said she lived in San Jose.

A German woman who was killed has been identified as Jennifer Henzold, though no hometown was immediately available for her.

Three other foreign tourists were wounded in the shooting late Wednesday at a street-side eatery that has some outdoor tables, right off Tulum’s main strip. They included two German men and a Dutch woman.

The gunfight apparently broke out between two groups that operate street-level drug sales in the area, according to prosecutors. The tourists were apparently dining at the restaurant and may have been caught in the crossfire.

On Friday, the civic group Citizens Observatorio of Tulum posted photos of hand-lettered signs that appeared at a local market in Tulum, signed by a drug gang known as Los Pelones, roughly “the Shaved Heads.”

The sign said the shooting “was a warning, so you can see we mean business,” adding “you either get in line or we are going to continue shutting places down like the Mini Quinta,” an apparent warning to pay extortion demands for protection money.

“We are in control here,” the sign added. The gang, part of the Gulf Cartel, has long extorted protection money from bars and night clubs in Cancun, but has now apparently extended operations further south to Playa del Carmen and Tulum. The gang is also fighting the Jalisco Cartel and other groups for the area’s lucrative drug market.

The killings threatened Tulum’s reputation as a low-key carefree beach town without the crowding and problems of Cancun.

After the shooting, U.S. tourist James Graham said he had come to Tulum with the idea of possibly buying a property there to rent out on AirBnB. “Right now, we are not so sure we’re going to buy anything here,” Graham said.

“I think that what was surprising, is we figured that this type of crime wouldn’t necessarily be where the main tourist areas are, just because it’s such a big part of the economy,” Graham said. “You would think that you would be very careful to make sure that you know the tourists feel very safe coming here.”

But there have been signs the situation was out of control months ago. In June, two men were shot to death on the beach in Tulum and a third was wounded.

And in nearby Playa del Carmen, police stage a massive raid Thursday on the beach town’s restaurant-lined Quinta Avenida, detaining 26 suspects — most apparently for drug sales — after a city policewoman was shot to death and locked in the trunk of a car last week. Prosecutors said Friday they have arrested a suspect in that killing.

Crime “has gone up a little with extortion, with drug sales to foreigners and Mexicans,” the prosecutors office said in a statement about the raid.

The administration of President Andrés Manuel López Obrador has pinned its hopes on Tulum, where it has announced plans to build an international airport and a stop for the Maya train, which will run in a loop around the Yucatan peninsula.

Honey, let's go on vacation? Ok, where? I was thinking a place that is one if the most violent in the World, where drug gangs are so ruthless the police don't approach them? Sounds nice, let's go......

It is impossible this woman was shot or any other person. Guns are illegal in Mexico so it should be a liberal democrat's utopia.

Ten people aboard a Norwegian Cruise Line ship approaching New Orleans have tested positive for COVID-19, officials said Saturday night. The Norwegian Breakaway had departed New Orleans on Nov. 28 and is due to return this weekend, the Louisiana Department of Health said in a news release. Over the past week, the ship made stops […]
NEW ORLEANS, LA・1 DAY AGO
KTLA

An outdoor holiday party in the Pacific Palisades came to a crashing halt Friday night when two armed robbers broke into the residence and stripped guests of jewelry, phones and a watch, according to the homeowners. The robbery happened on the 1200 block of Rimmer Avenue at around 7:40 p.m., the Los Angeles Police Department […]
LOS ANGELES, CA・11 HOURS AGO
KTLA

Bruno, a male orangutan at the Los Angeles Zoo who charmed staff and visitors there for nearly three decades, has died. He was 42. The zoo announced Bruno’s death on social media on Friday, saying “he passed away suddenly earlier this week.” The cause of the orangutan’s death was not immediately known, but Bruno was considered to […]
LOS ANGELES, CA・2 DAYS AGO
KTLA

Frank Buckley talks with Port of Long Beach Executive Director Mario Cordero about the volume at the San Pedro Bay ports complex and why the backlog of cargo ships and containers should come as no surprise.
LONG BEACH, CA・1 DAY AGO

Britain’s government tightened travel restrictions Saturday amid concerns about the spread of the omicron coronavirus variant, saying all travelers arriving in England will need to take a COVID-19 test before they board their flight. Health Secretary Sajid Javid said the new rules will apply from 4 a.m. London time Tuesday. “In light of the most […]
TRAVEL・1 DAY AGO
KTLA

New York announced three more cases of the omicron variant of the coronavirus Saturday, bringing the number of state cases linked to the new variant to eight. “The omicron variant is here, and as anticipated we are seeing the beginning of community spread,” state Health Commissioner Mary Bassett said in a news release. The number […]
PUBLIC HEALTH・1 DAY AGO
KTLA

Skyrocketing inflation is slamming many of California’s small businesses

For Vivian Bowers, owner of a South Los Angeles dry cleaner, inflation hit home when her wholesale cost for hangers soared by 48% in six months. Tom Bock, who runs an electric bike dealership in Huntington Beach, has had to pay his workers 25% more, on top of a boost in commissions. Hagop Berberian, owner […]
CALIFORNIA STATE・1 DAY AGO
KTLA

Contact tracing revs up in NYC, other states as omicron reaches U.S.

The arrival of the omicron variant of the coronavirus in the U.S. has health officials in some communities reviving contact tracing operations in an attempt to slow and better understand its spread as scientists study how contagious it is and whether it can thwart vaccines. In New York City, officials quickly reached out to a […]
PUBLIC HEALTH・2 DAYS AGO

Four killer whales were seen swimming together off the coast of Laguna Beach, and the regional sighting — the first one in over five years — was captured on video. Chip Yost reports for the KTLA 5 News at 3 on Dec. 3, 2021.
LAGUNA BEACH, CA・2 DAYS AGO
KTLA

Los Angeles County on Friday opened a rapid coronavirus testing site at the international terminal of LAX, a day after health officials reported the county’s first detected case of the omicron variant. The new site will offer voluntary antigen testing to international travelers, and workers will let them know that they must comply with the […]
LOS ANGELES COUNTY, CA・2 DAYS AGO
KTLA

Beginning Monday, travelers heading to the U.S. will be required to show evidence of a negative test for the virus within one day of boarding their flight instead of three days prior. Also, Biden will extend the federal rule requiring passengers on planes, trains and buses to wear face masks through March 18. It was […]
LOS ANGELES, CA・1 DAY AGO

At least 160 San Diego police officers could face termination for not complying with the city’s COVID-19 vaccination mandate unless they abide by the rules within the next 30 days. City employees were required to show proof of vaccination or request a medical or religious exemption by Wednesday of this week. The City Council, in […]
SAN DIEGO, CA・1 DAY AGO
KTLA

In the midst of a crime surge in the Los Angeles area, the city of Beverly Hills is taking steps to keep its citizens safe. The Beverly Hills Police Department is planning to swear in five new officers on Monday, and the department will contract more private security for the holiday shopping season. The move […]
BEVERLY HILLS, CA・15 HOURS AGO
KTLA

The restaurant said it's a "safe space" and the presence of weapons prompted its staff to deny service to the officers.
SAN FRANCISCO, CA・20 HOURS AGO
KTLA

Matthew McGrath, a five-year resident of West Hollywood, spent two weeks in the hospital and underwent multiple surgeries after he was attacked in the early hours of Nov. 15. “I’ve always felt safe in this neighborhood,” McGrath said. McGrath was walking home along San Vicente Boulevard after a night out with friends at The Abbey […]
WEST HOLLYWOOD, CA・2 DAYS AGO

Police are searching for robbers who approached a vehicle with a gun and took cash and jewelry from the occupants early Friday morning. The robbery was reported shortly before 3 a.m. in the 12000 block of Albers Street, where the victims were stopped after returning from an event in Hollywood. They were then approached by […]
LOS ANGELES, CA・2 DAYS AGO
KTLA

Hawaii health officials confirmed the first case of the omicron variant in a resident who hadn't traveled outside of the state.
HAWAII STATE・3 DAYS AGO
KTLA

A San Francisco Chronicle photographer was robbed at gunpoint on Friday afternoon in West Oakland, California, during an assignment, the newspaper reported. The robbery came on the heels of the death of a security guard, who was shot Nov. 24 in Oakland while protecting a KRON4 News reporter from an attempted armed robbery. Kevin Nishita died Nov. […]
OAKLAND, CA・2 DAYS AGO
KTLA

Los Angeles and Orange counties are home to some of the priciest real estate in the U.S., accounting for almost a quarter of the entries on a recent list of the most expensive ZIP codes. Of the 100 ZIP codes with the most expensive median sale prices, those two counties alone made up 30 of […]
LOS ANGELES, CA・2 DAYS AGO