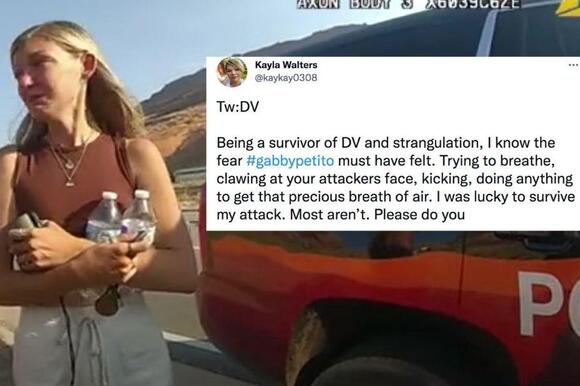 It's common news at this point that the cause of death for young aspiring influencer Gabby Petito was strangulation. But to the survivors of domestic abuse, the tell-tale signs were clear long before the headlines came out.

In a recent interview with BuzzFeed , 35-year-old Kayla Walters reflected on her own experience following Petito's case on social media. In particular, the released bodycam footage where Petito described an aggressive lover's quarrel with fiance Bryan Laundrie. As BuzzFeed put it, "As she watched the video, Walters was sure that Petito had been at risk of strangulation, and with it, death."

Why? Because Walters saw how Petito demonstrated Laundrie's violent face grab during the fight. That's all. But for survivors of strangulation like Walters, that small aggressive gesture is the only red flag needed.

"If he [Brian Laundrie] could do that, he could go further," Walters told BuzzFeed News, and she wasn't the only one who thought so. She continued that "A lot of survivors thought the same thing ... Just by her saying, 'He grabbed my face.'"

According to research published by the National Institute of Justice , people whose partners have attempted to choke or strangle them in the past are nearly 10 times more likely to be murdered than others.

BuzzFeed noted that red flags can include: "Any intimate partner nonconsensually putting their hands around someone's throat or face [as with Brian Laundrie], tying a scarf, tie, belt, rope, or other object around the neck without consent, or exhibiting a capacity for jealousy or control, such as tracking their partner's location, lashing out if they don't receive an immediate response to a text message, or separating the victim from their friends and family."

Unfortunately, this is not something the masses are made aware of, including our law enforcement. Domestic violence is an insidious torture both men and women endure, one that remains kept in the shadows due to shame, fear and, perhaps worst of all, acceptance of "that's just the way it is." We are not taught to catch the warning signs for ourselves and others, and the consequences, such as with Gabby Petito, can be life-ending.

Survivors of domestic abuse soon gathered on social media to speak out on the widespread lack of awareness the general public has. For them, it was an all-too-common image.

"Everybody knew before the [coroner's] report came out how she died," Kit Hunt, 52, a strangulation survivor in Austin, told BuzzFeed News. "We need to talk about how common this is ... How survivors are treated ... We're not believed ... We focus on the crime, and then everybody forgets about it. We need more discussion, that's what's missing."

Considering that 1 in 4 women will experience violence from an intimate partner, and 68% will experience near-fatal strangulation (and even then, only half will even have any visible signs of injury), I'd agree that a discussion is definitely needed.

Even when the strangulation is fatal, only half show visible signs of injury, according to the Training Institute of Strangulation Prevention . This makes strangulation cases difficult to detect, nearly impossible to report and easy to dismiss. But we can improve these statistics with education. Though the public social media craze that followed Gabby Petito's case has been a controversy in itself, perhaps its public revelations will also inspire more public awareness, leaving victims in better circumstances.

If any silver lining is to come of Gabby Petito's tragedy (and the tragedy of many, many more), it's that there is a real call for change. Rather than a sensational true crime story, let's treat this as what it really is: a chance to help others not become victims.

If you're looking to find more informational resources, or a safe place to share your story and seek help, many survivors have joined the private Facebook group Justice for Gabby .

exactly what i said from the video's even before the police video, something wad off in many of her videos. i am a survivor, if i didn't find my own way out i would be dead today. my abuse was getting worse each time. anyway i saw it from the start that he also had issues just the way he acted and sounded big fake. i feel so bad for her family.

We can not all be saved because some don’t make enough money to fight to defend ourself or our children. The reality is …gotta have money to be protected.

I wish those officers that pulled them over would of arrested Brian & taken it more seriously instead of saying she was the aggressor. It didn’t dawn on them that his marks from her could of been from her trying to defend herself ☹️

The lawyer for Gabby Petito’s family suggested there may soon be charges filed against “additional individuals” after authorities confirmed Brian Laundrie, her fiancé and the lone person of interest in her strangulation slaying, died by suicide. Attorney Richard Stafford floated the possibility in a press release late Tuesday, which also...
PUBLIC SAFETY・8 DAYS AGO
PIX11

Why is the Gabby Petito case still open?

Two months after Gabby Petito’s remains were found in Wyoming and a month after Brian Laundrie was found dead, both cases remain open and active.
NORTH PORT, FL・11 DAYS AGO
enstarz.com

Gabby Petito's remains had been located for two months now. Her fiancé Brian Laundrie's remains were discovered a month later. Their cases are still open and live, despite the fact that online sleuths believe they have been closed since police and detectives have not provided any updates. Despite the fact...
PUBLIC SAFETY・11 DAYS AGO
PIX11

TAMPA, Fla. (WFLA) — For the parents of Gabby Petito, Thursday was the first Thanksgiving that their daughter would never be able to pay a visit again. According to authorities, Gabby Petito was strangled while at Wyoming’s Grand Teton National Park. Her body was was found at a campsite in the park on Sept. 19, […]
SOCIETY・8 DAYS AGO

What We Know About the Disappearance of Gabby Petito

Influencer Gabby Petito was reported missing on September 11 after an extended road trip through the desert with her boyfriend, who had since returned to the couple’s Florida home. On September 19, the FBI said it had found human remains consistent with the description of Petito. Later, a coroner determined she died by strangulation.
PUBLIC SAFETY・10 DAYS AGO
Newsweek

(NEW YORK) — The death of Brian Laundrie, the boyfriend of murdered travel blogger Gabby Petito, has been ruled a suicide, according to the Laundrie family attorney. Laundrie’s remains were found Oct. 21 at the Carlton Reserve in North Port, Florida, in an area that had been submerged in water during a month-long search. The Sarasota County medical examiner did not conclude a manner or cause of death, so Laundrie’s remains were brought to a forensic anthropologist for analysis.
SARASOTA COUNTY, FL・11 DAYS AGO
Ok Magazine

Charges in the Gabby Petito murder case might be filed sooner rather than later according to her family's attorney. Following the news that the late social influencer's fiancé Brian Laundrie, died from a self inflicted gunshot wound to the head, the Petito's lawyer Richard Stafford released a statement stating that prosecutors have requested that he and Petito's parents and stepparents withhold comment on the case.
PUBLIC SAFETY・10 DAYS AGO

Brian Laundrie, who made headlines as a person of interest in the disappearance of his fiancée Gabby Petito, died of gunshot wound to the head, according to a statement from the Laundrie family attorney Steven Bertolino. Autopsy results confirm the manner of death is suicide, Brian Entin, a reporter for...
PUBLIC SAFETY・11 DAYS AGO
New York Post

Gabby Petito’s family launched new social media platforms dedicated to finding missing people. “We have converted our original #findgabby page on FB into a missing persons page,” stepdad Jim Schmidt tweeted Wednesday. “We are expanding it to Twitter and Instagram too. A work in progress, but we are committed to help find the missing.”
PUBLIC SAFETY・3 DAYS AGO
Popculture

Gabby Petito's parents are not sitting idly by while others face similar situations to their late daughter. That's why they reached out and tried to help when another young girl went missing on a cross-country trip to visit her boyfriend. Lateche Norris last spoke to her parents after arriving in California. A phone call to her mother on Nov. 5 indicated she'd been fighting with her boyfriend and promised to call her back the next day.
PUBLIC SAFETY・3 HOURS AGO
HollywoodLife

The final autopsy revealed that Laundrie died from a self-inflicted gunshot wound to his head, and his parents have been informed. Over two months after Gabby Petito’s body was discovered in Bridger-Teton National Forest on September 19, a lawyer for her boyfriend Brian Laundrie’s family Steve Bertolino revealed that Laundrie’s cause of death has been revealed as a self-inflicted gunshot wound. He noted that Laundrie’s parents Chris and Roberta have been informed, and are mourning their son’s death.
PUBLIC SAFETY・11 DAYS AGO
cw34.com

Resources for domestic violence survivors available during the holidays

PALM BEACH COUNTY, Fla. (CBS12) — Advocates are raising awareness of the resources available in our area after two domestic violence-related incidents occurred in less than 24 hours. “Situations like we did last night like in Lake Worth and in Boynton Beach, it’s going from one extreme to the other,”...
PALM BEACH COUNTY, FL・11 DAYS AGO
KVCR NEWS

The Voice: A housing crisis for survivors of domestic violence

The number of people without permanent housing in the Inland Empire increased by 24 percent in 2020, and one large group that is falling through the cracks are survivors of domestic violence. KVCR’s Megan Jamerson talks to Stephanie Williams of Black Voice News about this overlooked cause of homelessness in the inland region.
HOMELESS・9 DAYS AGO
fox5ny.com

NEW YORK - The family of Gabby Petito says they have launched a new Twitter page dedicated to helping find missing persons. The page, called "Gabby - Find the Missing," aims to use the power of social media to spread awareness for various missing persons. "We have converted our original...
NEW YORK CITY, NY・3 DAYS AGO
cbslocal.com

NEW YORK (CBSNewYork) — The family of Gabby Petito, the 22-year-old Suffolk County-native whose disappearance and death made national headlines, is changing their “Find Gabby” social media pages to support searches for other missing persons. “We have converted our original #findgabby page on [Facebook] into a missing persons page. We...
FLORIDA STATE・2 DAYS AGO
thewildcattribune.com

The Gabby Petito disappearance case has taken over American media, with many major news outlets focusing on the investigation’s numerous twists and turns. Many users on social media platforms like TikTok and Instagram have also donned their detective gear, relentlessly scouring Petito’s photos and videos for any clues. The case...
PUBLIC SAFETY・7 DAYS AGO
Augusta Free Press

Domestic violence and personal injury claims: Do they have something in common?

News, press releases, letters to the editor: augustafreepress2@gmail.com. If you have been a victim of domestic violence, the most important step you can take is keep yourself safe. Contact local law enforcement and remove yourself from the dangerous situation as soon as possible. There are legal steps you can take...
PUBLIC SAFETY・7 DAYS AGO
Tampa Bay Times

ST. PETERSBURG — When Zuleika Gonzalez sees the fear in her clients’ eyes, she sees her old self. When she tells them, “You will be vindicated if you stay the course,” she means it. She has been there. Years before Gonzalez, 46, became the manager of batterer accountability services at...
PINELLAS COUNTY, FL・7 DAYS AGO
First Coast News

CEO of Quigley House, domestic abuse survivor share red flags to watch out for in a relationship