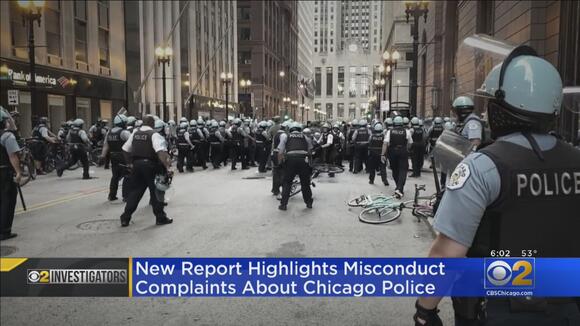 CHICAGO (CBS) — The Bureau of Internal Affairs released a report about complaints of misconduct made against Chicago police officers in 2020.

Close to 100 of those complaints were verified, according to the report, ranging anywhere from conduct unbecoming of an officer to alcohol and drug abuse.

Their team of 92 investigators received a flood of complaints and ultimately completed 914 investigations.

91 of them were sustained, meaning there was enough evidence to support that it happened.

The majority for failing to provide service to residents, conduct unbecoming of an officer, and neglecting their duties.

Allegations revolving around arrests and lock up incidents were the second most common.

Also, in 2020, the Bureau of Internal Affairs received 20 complaints about officers involved in search warrants.

For years, the CBS2 Investigators have been reporting on wrong raids on innocent families’ homes.

The report says that two of the search warrant complaints made last year were verified by evidence. But it’s unclear exactly what the allegations were.

Another finding, 28 CPD members were arrested in the year 2020. 20 of them arrested by their own police department. Of those 28 officers, 23 of them are still active members of CPD.

Of the five remaining officers who were arrested in 2020, three of them are currently considered inactive, and another two officers resigned while under investigation.

In 2020, about half of the sustained allegations resulted in non-disciplinary penalties, just marks on their record. 13 percent resulted in suspensions and none of the Bureau of Internal Affairs complaints resulted in the officer getting fired.

Oh I’m sure there was, our city and county leaders came right out and advised people to put in complaints. Ridiculous this all is.

CHICAGO - Chicago's top cop had a few things to talk about Monday morning as he stood before reporters. Chicago Police Superintendent David Brown introduced a new Narcotics Arrest Diversion program designed to keep drug offenders out of the system and in treatment, saying "three strikes and out" is a dated policy.
CHICAGO, IL・12 HOURS AGO
Daily Voice

The mother of two young girls who were kidnapped, taken across state lines to Maryland and were found shot dead in a quadruple murder-suicide, has filed a private criminal complaint against the chief of York area regional police, area officials announced.Marisa Ayala Vicosa asked the police for hel…
BALTIMORE COUNTY, MD・6 DAYS AGO
CBS Pittsburgh

By: KDKA-TV’s Shelley Bortz NEW CASTLE (KDKA) — A teenage girl believed to be taken from a home in New Castle against her will actually left willingly, police said. Family members told police 16-year-old Haylee Hobbs was kidnapped by her ex-boyfriend, 18-year-old Carlos Jones, from a home along Pennsylvania Avenue on Sunday night around 11:30 p.m. Police said officers were told a family member got a Snapchat from the teen, who was crying and saying she was taken. “He took me, call the police,” the video said. Family members also said the teen left in only her shorts and slippers and without her cell phone. (Courtesy: New Castle Police Department) Investigators tracked Hobbs and Jones to a home on Halco Drive on Monday morning and learned that Hobbs actually left voluntarily. “We we told there was a history of violence in the relationship. So based on those circumstances, we acted accordingly,” police said. Hobbs was taken to the police station, where she was reunited with her family. No charges are being filed against Jones. Police said they’re still investigating.
NEW CASTLE, PA・14 DAYS AGO
iheart.com

>Mother of Vicosa Girls Files Criminal Complaint Against York Police Chief. (York, PA) -- The mother of two young girls killed in an apparent murder-suicide last week has filed a criminal complaint against the York police chief. She reportedly says he stopped an emergency protection from abuse order against her estranged husband Robert Vicosa. Chief Timothy Damon is under fire for how his department handled the restraining order against Vicosa, a former Baltimore County police officer. Three days after the complaint, police said Vicosa shot his daughters and his girlfriend and then himself inside a car near the Maryland border. The complaint against the police chief has been turned over to the state attorney general.
YORK, PA・5 DAYS AGO

More than 4,900 members of the Chicago Police Department are not fully vaccinated against COVID-19 or have refused to disclose their vaccination status to city officials, one month after the deadline set by Mayor Lori Lightfoot, according to data released Monday by city officials. Approximately half of those members of...
CHICAGO, IL・14 DAYS AGO
pncguam.com

The Guam Police Department’s Internal Affairs Investigation has opened an administrative investigation against a GPD staff officer, for alleged misconduct that occurred on November 11, 2021, during the late-night hours in the Sagan Ypaopao neighborhood. According to GPD, patrol officers responded to the neighborhood for a reported suspicious vehicle and...
LAW ENFORCEMENT・5 DAYS AGO
texassignal.com

The Workers Defense Project, a labor group for immigrants and construction workers, has filed a complaint against Austin police after their office was raided last week. The Austin Police Department was searching for security footage of an alleged assault attempt that occurred in the non-profit’s parking lot. Workers Defense Project...
AUSTIN, TX・10 DAYS AGO

After delay, Birmingham board now accepting complaints against police officers

BIRMINGHAM, Ala. (WIAT) — Despite a delay, Birmingham’s Civilian Review Board is now accepting public complaints against police officers. The new process for complaints against police was quietly rolled out in the days following a CBS 42 report that showed officials were behind schedule in implementing the new system. In April, Birmingham Mayor Randall Woodfin […]
BIRMINGHAM, AL・5 DAYS AGO
CBS Chicago

CHICAGO (CBS) – Police are warning residents of recent robberies in the McKinley Park neighborhood on Friday. In each incident, the offenders approached the victims in a grocery store parking lot and demand property before fleeing in a black vehicle, according to police. The Incident times happened just minutes apart: 3100 block of South Ashland Avenue 7:50 p.m. on Nov. 26, 2021. 3100 block of South Ashland Avenue 7:52 p.m. on Nov. 26, 2021. The offenders are described as two African American men, one offender with dreadlocks, 5’06-6’01, 17-25 years, 150-160lbs., with a dark complexion. Anyone with information is asked to contact Area One detectives at 312-747-8382.
CHICAGO, IL・2 DAYS AGO
CBS News

Keith Pool, a Black police officer in Ohio, says his chief put a KKK note on his raincoat. "CBS Mornings" lead national correspondent David Begnaud spoke with Pool who says the incident was "demeaning and destructive" to him.
OHIO CITY, OH・7 DAYS AGO
CBS Chicago

Chicago Police Alert Businesses Of Retail Thefts In Near North Side

CHICAGO (CBS) — A man has been arrested in connection with an expressway shooting that happened in April. Armonii M. Russell, 24, from Chicago, is charged with one count of attempted first degree murder, one count of aggravate discharge of a firearm at an occupied vehicle, one count of unlawful use of a weapon and resisting or obstructing a peace officer. The shooting took place on April 27 shortly before 3 p.m. on Interstate 94 northbound at 59th Street. Russell is accused of side swiping and shooting at a semi trailer driven by a 26-year-old man from Lyons. That driver was uninjured. The next day Illinois State Police attempted to contact Russell while he was trying to get in the suspect vehicle, but police say he fled on foot. ISP arrested Russell during a traffic stop on Nov. 23 and is in custody at the Cook County Jail with no bond.
CHICAGO, IL・1 DAY AGO
Telegraph

A US policeman, already facing up to 20 years in prison for leaking a video of his fellow officers slapping and swearing at a dying black man, has been removed from his force for alleged misconduct. Sergeant Javier Esqueda, a 27-year veteran of the Joliet Police Department in the suburbs...
LAW ENFORCEMENT・12 DAYS AGO
Chicago Tribune

54 slayings, more than 80 charged: As Chicago’s gangs have changed, so have federal RICO prosecutions

The victims met their fates over two decades in every corner of the city: informants shot execution-style, rivals gunned down in barbershops and restaurants, a rapper targeted after online taunts, an innocent bystander felled by bullets sprayed at a pickup basketball game. At least 54 people slain and dozens more wounded in shootings stretching from Englewood to Garfield Park to the Gold Coast ...
CHICAGO, IL・19 HOURS AGO
CBS Miami

MIAMI (CBSMiami) – A woman was arrested Saturday morning after biting a deputy after she was kicked out of an Islamorada bar, according to the Monroe County Sheriff’s Office. Authorities said Zena Marchant, 32, was charged with resisting arrest with violence, battery on a law enforcement officer, trespassing, and misuse of 911. Here is what the arrest report said about the incident: “It started approximately 2:38 a.m. at Hog Heaven Sports Bar & Grill when Deputy Anfernee Rodriguez ordered two females — Zena Marchant and 29-year-old Yanique Marchant — to leave the property for causing a disturbance.” Deputies said Marchant bit Rodriguez on the hand during attempts to handcuff her.
ISLAMORADA, FL・2 DAYS AGO
abc11.com

The search is on for three "violent" inmates who remain at large days after escaping from a Georgia jail, authorities said. Tyree Williams Jr., 33; Brandon Pooler, 24; Dennis Penix Jr., 28; and two other inmates fled the Pulaski County Jail, about 130 miles south of Atlanta, on the night of Nov. 12, the Georgia Bureau of Investigation said.
LAW ENFORCEMENT・14 DAYS AGO
CBS DFW

CHICAGO (CBS) – Police are looking to identify a man involved in a shooting in the North Lawndale area this past Saturday. Police said around 1:42 p.m., the incident occurred at 3800 Block of West Roosevelt Road. Surveillance footage shows the suspect inside a store before walking outside. He walks up to the unknown victim and pulls out a handgun. Anyone with information is asked to contact Area Four detectives at (312) 746-8252 or send an anonymous to cpdtip.com.
CHICAGO, IL・3 DAYS AGO
CBS Chicago

ISP Arrest Man For Attempted Murder, Aggravated Battery On I-290

CHICAGO (CBS) – A man remains in custody following a domestic dispute on I-290 Thursday, according to Illinois State Police. Arrington S. Bell, 33, of Chicago is charged with attempted first-degree murder and aggravated domestic violence with strangulation, according to authorities. Around 3:07 a.m., ISP responded to a reported domestic battery incident on I-94 southbound at I-290 involving a man and a woman. The two were separated at the scene and transported to Chicago Police Department First District for questioning. Bell appeared in Cook County court Saturday and was given a no-bond court date set for Nov. 30.
ILLINOIS STATE・1 DAY AGO