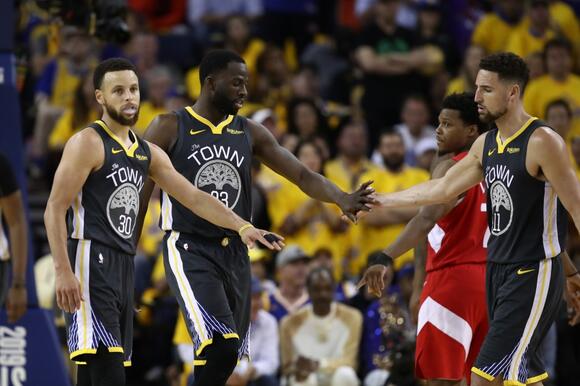 Klay Thompson’s frustrations with the NBA’s 75 greatest players list have extended to some of his Golden State Warriors teammates.

“Maybe I’m just naïve in my ability to play basketball, but in my head I’m top 75 all time,” Thompson wrote in an Instagram post Thursday.

But Green grouped his teammate in a much tighter list.

The other half of the Splash Bros, Stephen Curry, also joined the conversation.

Curry re-shared a post of Thompson’s quote and added a speaker emoji and tagged Thompson.

The list was released on Thursday, but Thompson woke up Friday morning “still pissed” about being left off.

“Woke up this AM, still pissed about this stupid a** list. Ga damn I can’t wait to hoop again. Sick of the disrespect. Winning isn’t everything to some people like it is to me I guess,” he wrote on his Instagram story.

Thompson is a five-time NBA All-Star, three-time champion, two-time All-NBA selection, and has made one all-defensive team.

Steph Curry dominated in the Golden State Warriors' win over the Brooklyn Nets last night with a game-high 37 points and nine three-pointers. His former teammate, Kevin Durant, had 19 points, but did not score a field goal in the third quarter. Golden State has the best record in the NBA. A columnist wrote that Curry and the Warriors are winning the breakup with KD. Marcellus Wiley explains why KD is winning the breakup over Steph.
NBA・15 DAYS AGO
Mercury News

It ain’t easy being the 3-year-old son of Golden State Warriors star Steph Curry. Never mind that Curry just scored 20 points Sunday to help the team beat the Houston Rockets — Canon Curry got upset as he watched his dad disappear into the tunnel after the game. The touching moment was caught on video by Let’s Go Warriors.
NBA・24 DAYS AGO
firstsportz.com

The Golden State Warriors are sailing through the League smoothly like butter, and Stephen Curry is just being flawless o the court with his skills. They are destroying almost all the teams they face with the same dominance and intensity but it’s Curry who has won more fans than haters.
NBA・10 DAYS AGO
ClutchPoints

The only question that remains in terms of debating the greatest shooting duo in NBA history is who comes in second. The iconic Golden State Warriors tandem of Stephen Curry and Klay Thompson have a hold on the top spot that they may very well never relinquish. But once upon...
NBA・27 DAYS AGO

Steph Curry and the Golden State Warriors lost to the Phoenix Suns on Tuesday evening in Arizona.
NBA・2 DAYS AGO
Sports Illustrated

The Golden State Warriors crushed the Brooklyn Nets 117-99 on Tuesday night to improve to a 12-2 record, which is the best in the NBA. Meanwhile, the Nets fell to 10-5, (but they did rebound on Wednesday night beating the Cleveland Cavaliers 109-99 to improve to 11-5). Kevin Durant was...
NBA・14 DAYS AGO
fadeawayworld.net

Steph Curry Pays Tribute To Muggsy Bogues: “5’3 On The Court But A Giant To The Game… All Love Muggs!”

Few people can deny just how influential Muggsy Bogues was in the NBA. At just 5'3, Bogues is one of the shortest players to ever play in the NBA. In a land of giants, Bogues was able to use his incredible skill and talent to shine and pave the way for several other players.
NBA・12 DAYS AGO
fadeawayworld.net

The Golden State Warriors keep their good pace in the 2021/22 NBA season, beating the Philadelphia 76ers at Chase Center on Wednesday night. Stephen Curry once again led his team to the win, dropping 25 points on his brother's squad. Seth Curry, who is the only current player in the...
NBA・8 DAYS AGO

Klay Thompson unhappy with disrespect that Warriors get from analysts

Klay Thompson is not pleased with the suggestion that the Golden State Warriors are Mickey Mouse contenders. In a recent interview with Sports Illustrated, the injured Warriors star spoke on the disrespect that he feels the team has gotten from analysts this season. “I love it,” said Thompson defiantly. “I...
NBA・16 DAYS AGO
NBA Analysis Network

The Golden State Warriors are heading into a major showdown this week against the Phoenix Suns. The two hottest teams in the NBA will be taking part in a home and home this week, with the teams facing off on Tuesday night at Footprint Arena and then Friday night at Chase Center. The Suns have one game in between, against the Detroit Pistons, at home on Thursday before traveling to take on the Warriors.
NBA・3 DAYS AGO
USA TODAY Sports Media Group

To end a four-game road swing, the Golden State Warriors will be without four key contributors on Friday against the Detroit Pistons. After a fiery comeback on Thursday against the Cleveland Cavaliers, the Warriors have ruled out Steph Curry, Draymond Green, Andre Iguodala and Otto Porter Jr. against the Pistons.
NBA・13 DAYS AGO
FastBreak on FanNation

The Phoenix Suns defeated the Golden State Warriors on Tuesday night in Arizona.
NBA・2 DAYS AGO

The Golden State Warriors have been the best team in the NBA this season and they’ve been doing it without star shooting guard Klay Thompson. Golden State, 14-2 on the season, could be getting Thompson back pretty soon, though. Thompson, who’s been recovering from a torn Achilles and a torn...
NBA・11 DAYS AGO
Larry Brown Sports

The latest report about Klay Thompson’s return from injury is being disputed by a fairly reliable source. Golden State Warriors coach Steve Kerr reacted on Sunday to a report from Shams Charania and The Athletic that claimed Thompson had been cleared for full participation in practice. Kerr said that nobody had told him about that supposed development.
NBA・11 DAYS AGO
ClutchPoints

REPORT: Stephen Curry, Warriors get key piece back ahead of Friday’s rematch vs. Suns

The Golden State Warriors suffered only their third loss of the season on Tuesday following a disappointing loss against a surging Phoenix Suns side. These two teams go at it again on Friday in a highly-anticipated rematch and it sounds like the Dubs are getting some reinforcement for that tilt.
NBA・18 HOURS AGO
SFGate

In Warriors-Cavs game, Steph Curry did something no NBA player has achieved in 25 years

In the Golden State Warriors’ 104-89 victory over the Cleveland Cavaliers on Thursday, Steph Curry showed out with a historic performance that further adds to his early-season MVP case. Alongside his 40 points in total, Curry — as Elias Sports noted — became the first player in the last 25...
NBA・13 DAYS AGO
ClutchPoints

Golden State Warriors’ Klay Thompson identified winning as his way to get recognition after his NBA Top 75 snub. Speaking to reporters, Thompson cited the lack of recognition he receives as a driving force behind his desire to win. As per Anthony Slater:. “I wanted recognition. I didn’t get it....
NBA・9 DAYS AGO
San Francisco Chronicle

Klay Thompson spoke Tuesday, oozing enthusiasm, optimism and confidence, making it clear that he’ll be back on the court soon. “Grrrrreeeaaat,” said the rest of the NBA. “The Warriors certainly could use the help.”. The Warriors are 15-2 going into Wednesday’s game against the 76ers at Chase Center, and the...
NBA・9 DAYS AGO
fadeawayworld.net

Steve Kerr On Steph Curry's Angry Reaction To Not Getting A Foul From The Referee: "When He Knows He's Right, The Competitor In Him Comes Out And He'll Kind Of Lose His Mind A Little But."

Steph Curry had a spectacular performance against the LA Clippers. In yet another win to bump the Warriors' record to 18-2, Curry put on a show against the Clippers, scoring 33 points, and making 7 threes. But a big talking point from the game was Curry receiving a technical foul, and his angry reaction to that.
NBA・4 DAYS AGO
San Francisco Chronicle

In one of the most star-studded G League transactions ever, the Warriors recalled Damion Lee, Klay Thompson and James Wiseman from Santa Cruz on Wednesday. But all the paperwork actually means is that the Warriors are back from their trip through Los Angeles and Phoenix, so the trio can practice again with the big club in San Francisco.
NBA・1 DAY AGO