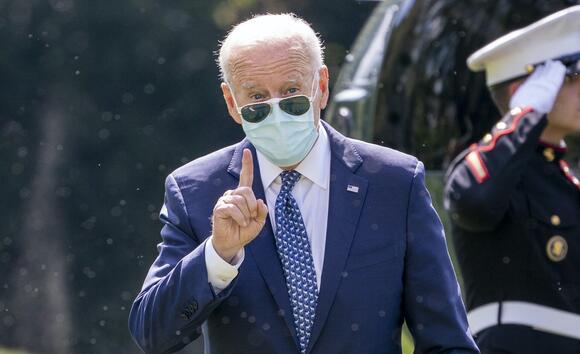 The Department of Homeland Security awarded a $456,548 contract in September to Rehoboth's Turnstone Builders, a Delaware construction company, to erect the security barrier, according to USASpending.gov .

Construction on the wall had not begun as of Oct. 20, the Cape Gazette reported , but the government spending website says the project is expected to be finished by the end of the year.

Biden bought the North Shores home in 2017, and he paid $2.7 million for the property, according to county tax records.

He has visited the property twice so far during his presidency.

During Biden's first visit in June, the Secret Service and local police set up a security checkpoint, a nearby pond was closed, and the Federal Aviation Administration issued temporary flight restrictions, according to the local report.

For his second visit, a couple of months later, the Coast Guard created security zones in the Lewes-Rehoboth Canal and the Atlantic Ocean.

The Washington Examiner reached out to the White House for comment but did not receive a response.

So, Biden gets a fence to secure his beach house, but the border states get the middle finger from Biden, instead of a fence to secure their state from illegal immigration, illegal drugs, gang members, terrorists, and human trafficking of foreign women and children. Thanks Biden!

He believes in a fence for himself but not for the safety of the United States, the People HE is SUPPOSED to be protecting???? He SHOULD pay for it himself instead of TAXPAYERS.

They should be his closest allies and supporters, but environmentalist groups that claim President Joe Biden has failed to deliver on his green promises are stepping up demands for action.
ADVOCACY・7 HOURS AGO
Vice

Confusingly, the leaders of this land of contradictions—who have said they’re motivated by California governor Gavin Newsom’s mandate that schoolchildren be vaccinated against COVID-19—have asserted that they are not seceding from either the state of California or the United States, but simply refusing to recognize their legal and political authority. (They cite the refusal of San Francisco, a Newsom stronghold, to enforce federal immigration laws as precedent, though that city has not declared itself a republic.) Footage from the council meeting, though, complicates the picture.
U.S. POLITICS・6 HOURS AGO

Will President Joe Biden's $2 trillion social-spending and climate package actually get the Senate's OK this month, as that chamber's leader has promised? Two analysts from opposite ends of the political spectrum say that looks likely.
PRESIDENTIAL ELECTION・4 HOURS AGO
Fox News

Former President Donald Trump tore into President Joe Biden in a wide-ranging interview Thursday, suggesting that the administration is "knowingly" destroying the country and is distrusted by the American people. During an appearance on "Fox & Friends," Trump shot back at the president over his 2020 comments, where he suggested...
PRESIDENTIAL ELECTION・7 HOURS AGO
WashingtonExaminer

As the omicron variant of COVID-19 emerges as a major concern for the public, inconsistent and overlapping messages from the White House response team risk causing confusion over the status of the variant, the efficacy of vaccines, and what the end game is as the virus continues to spread.
PUBLIC HEALTH・23 HOURS AGO
WashingtonExaminer

The White House is bracing for the Supreme Court to chip away at the landmark 1973 abortion case Roe v. Wade as the justices consider the constitutionality of a Mississippi law banning the termination of pregnancies after 15 weeks.
SEATTLE, WA・9 HOURS AGO

The Biden administration has reached a deal with the Mexican government to restart a Trump-era border initiative that mandated all asylum-seekers be returned to Mexico while their claims are processed.
PRESIDENTIAL ELECTION・6 HOURS AGO
The Guardian

The Biden administration’s recent travel ban on south African nations is a ploy to appear to be doing something about the omicron coronavirus variant, according to Washington Examiner editor-in-chief Hugo Gurdon.
PRESIDENTIAL ELECTION・4 HOURS AGO
TheAtlantaVoice

A federal judge on Tuesday blocked the Covid-19 vaccine requirement for federal contractors in Kentucky, Ohio and Tennessee — the third time in recent weeks that President Joe Biden’s federal mandate has been blocked in some capacity in certain parts of the country. “The question presented here is narrow. Can the president use congressionally delegated authority to manage the federal […]
PUBLIC HEALTH・1 DAY AGO

Biden to extend mask mandate on planes, trains, and buses

The Biden administration is expected to extend mask mandates while traveling on domestic flights, trains, and public transportation and require testing for international arrivals in response to the new omicron variant of the coronavirus.
U.S. POLITICS・8 HOURS AGO
The Independent

Biden considering seven-day quarantine for all travellers to the US

The United States government is considering a seven-day self-quarantine for everyone entering the country amid the emergence of the omicron variant of the coronavirus.The Joe Biden administration is also preparing stricter testing requirements for all travellers, including returning Americans, three federal officials told The Washington Post.The mandatory self-quarantine would be in place even for those with full vaccination and a negative Covid-19 test. People found violating the requirements might be subjected to fines and penalties.The self quarantine-related measures are not in that draft but could be added later, an official said.At present, vaccinated travellers are required to test three days...
U.S. POLITICS・1 DAY AGO

'The Ingraham Angle' on Biden, Build Back Better, Boebert-Omar feud

This is a rush transcript from "The Ingraham Angle," November 30, 2021. This copy may not be in its final form and may be updated. LAURA INGRAHAM: All right. I'm Laura Ingraham, and this is THE INGRAHAM ANGLE from Washington tonight. Now, breaking another day, another major court loss for...
PRESIDENTIAL ELECTION・5 HOURS AGO
New York Post

Joe Biden says Omicron Covid variant a ‘cause for concern, not panic’ – as it happened