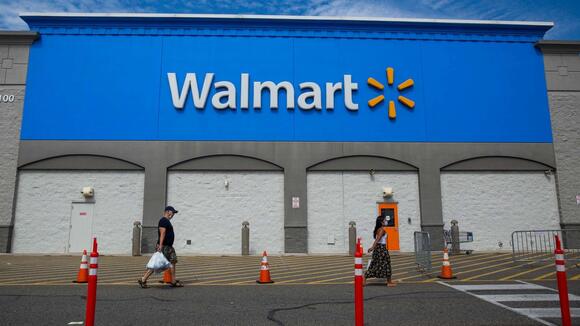 Walmart has recalled an aromatherapy spray after it identified a bacteria in the product that has now been linked to four illnesses and two deaths.

The Centers for Disease Control and Prevention announced Friday that it had identified the bacteria Burkholderia pseudomallei in the aromatherapy spray.

The spray, “Better Homes & Gardens Lavender & Chamomile Essential Oil Infused Aromatherapy Room Spray with Gemstones," was found Oct. 6 in the home of a Georgia resident who became ill with melioidosis in late July, according to the CDC .

The CDC said it will continue to test the bacteria in the bottle to potentially match the bacteria identified in the four patients. The symptoms of melioidosis are similar to that of a cold or flu, according to the CDC.

The contaminated spray was sold at about 55 Walmart stores and on Walmart’s websites between February and Oct. 21.

Walmart has pulled the remaining bottles of this spray and related products from the shelves and its websites.

"Our hearts go out to the families that have been impacted by this situation," Inger Damon, director of the CDC’s Division of High-Consequence Pathogens and Pathology, said in a statement. "We at CDC have been very concerned to see these serious related illness spread across time and geography. That is why our scientists have continued to work tirelessly to try to find the potential source for the melioidosis infections in these patients. We hope this work can help protect other people who may have used this spray."

The Consumer Product Safety Commission and Walmart issued a recall for the lavender and chamomile room spray along with five other scents in the same product line.

The CDC will continue to investigate whether other related aromatherapy scents and brands may pose a risk.

Dr. Fauci Has an Urgent New Warning for Vaccinated People

Last year, the winter season brought on a massive COVID surge as people moved indoors and gathered for the holidays against expert recommendations. Now, the Centers for Disease Control and Prevention (CDC) reports that more than 196 million people in the U.S. are fully vaccinated—a precaution that wasn't widely available in 2020. But while that might seem like reason enough to celebrate the way we did pre-pandemic, COVID is still circulating at high rates throughout the U.S., and cases are rising. There were nearly 90,000 new cases reported in the last week, which is an increase of more than 16 percent from the week prior, according to the CDC. With another potential surge on the horizon, vaccinated people shouldn't let down their guard completely, health officials caution.
PUBLIC HEALTH・10 DAYS AGO
Popculture

Fish fans on the West Coast might want to toss their lox into the trash if they bought Oregon Lox Company products recently. Earlier this month, the Eugene, Oregon-based company voluntarily recalled brands of Wild Cold Smoked Keta Salmon Lox after learning some of the salmon could be contaminated with an organism that could cause "fatal infections" in young children, elderly people, and those with weakened immune systems. The affected product was distributed in Alaska, California, Oregon, and Washington and shipped frozen.
FOOD SAFETY・4 DAYS AGO
MedicalXpress

People with allergic conditions such as hay fever, rhinitis, and atopic eczema, may have a lower risk of COVID-19 infection, especially if they also have asthma, finds a large, population-based study of UK adults, published online in the respiratory journal Thorax. And contrary to the findings of recent studies, older...
PUBLIC HEALTH・2 DAYS AGO
FOX 13 Memphis WHBQ

OAK BROOK, Ill. — Odor-Eaters on Wednesday recalled select lots of two aerosol spray products after internal testing detected low levels of a known carcinogen. Per the voluntary recall notice, 41 lots of Odor-Eaters’ Spray Powder and Stink Stoppers sprays were found to contain benzene, which can result in cancers - including leukemia and blood cancer of the bone marrow, as well as certain life-threatening blood disorders - if inhaled, consumed orally or absorbed through the skin.
OAK BROOK, IL・11 DAYS AGO

Odor-Eaters, owned by Blistex, has voluntarily recalled 41 lots of two of its products ”due to the presence of benzene.”. According to an announcement with the U.S. Food and Drug Administration, “Benzene is classified as a human carcinogen.” Exposure to benzene can result in cancers including leukemia and blood cancer of the bone marrow.
HEALTH・14 DAYS AGO
Mic

How toxic are the body sprays that are being recalled?

We really shouldn’t be too surprised when a grooming product is criticized for having a “toxic” chemical in it (the term itself simply means “harmful to the body”). Unless we’re rolling around in mud like god intended or slapping on clay straight out of an Icelandic lagoon, most of the stuff we rub on our bodies on any given day is highly processed and lies on a spectrum between “not great but we’ll make it” to “oh hell no.” Unfortunately, there was a recent recall on a few body sprays that appear to be on the worse end of that spectrum.
HEALTH・1 DAY AGO
MassLive.com

Two frozen vegetable products are being recalled by the Food and Drug Administration. Flagship Food Group has voluntarily recalled a limited amount of TJ Farms Select brand frozen cauliflower packages because they are potentially contaminated with Listeria monocytogenes. Listeria monocytogenes is an oragnism that can cause serious and sometimes fatal infections in young children, elderly people, and individuals with weakened immune systems, according to the FDA.
FOOD SAFETY・2 DAYS AGO
MercuryNews

3 vaccine shots and 1 booster later, this man has little protection against Covid-19

Double-masking, staying at home nearly 24/7 and rarely seeing people beyond his wife are still the way of life for kidney transplant recipient Andrew Linder, even after many in the United States are living like the pandemic has ended. Health officials are recommending third and even fourth shots to boost...
PUBLIC HEALTH・23 DAYS AGO

A real-world retrospective cohort study involving nearly 1.2 million people shows COVID-19 infections in the 'fully' vaccinated are rare but are more common and severe in people with weaker immune systems. The findings, published today in the Journal of Medical Economics, are led by researchers from Pfizer, which has co-developed...
SCIENCE・2 DAYS AGO
EatThis

This Cancer-Causing Substance Was Just Found in Spinach Sold Nationwide

Spinach is widely considered to be a superfood. It's packed with folate, omega-3s, lutein, iron, and more. Thus, it's little surprise that health experts around the globe extoll the benefits of this dark, leafy green vegetable. However, a recent inspection of nearly 175 samples of spinach pulled from various retailers has uncovered a danger often lurking in this healthy superstar: the heavy metal cadmium.
HEALTH・1 DAY AGO
Best Life

90 Percent of People Hospitalized With Omicron Have This in Common

A new variant first detected in South Africa has health officials around the world on high alert. Now reported in more than 20 countries so far, the Omicron variant has caused a surge in South Africa in a short period of time, increasing new COVID cases in the country from about 300 a day in mid-November to around 3,000 each day, as reported by The New York Times. At the moment, virus experts warn that the data on this variant is still very limited. White House COVID adviser Anthony Fauci, MD, said it will take about two to four weeks to gather more information on Omicron's transmissibility and severity. For now, we can only look to anecdotal data on how this variant is affecting the people it's infecting.
NEW YORK CITY, NY・1 DAY AGO
WTVR CBS 6

A post-COVID complication impacting children is causing concern for some parents after the first Virginia child died from the condition, according to the Virginia Department of Health.
RICHMOND, VA・4 DAYS AGO

Doc. RNDr. Josef Reischig, CSc., CC BY-SA 3.0, via Wikimedia Commons. The use of a topical drug called AB569, a combination of acidified nitrite and EDTA (or ethylenediaminetetraacetic acid), promotes the killing of antibiotic-resistant bacteria while also improving wound healing in a variety of burn injuries, according to research from the University of Cincinnati College of Medicine. Infection and Immunity journal published the study.
1 DAY AGO
Newsweek

The recall notice said that the level of benzene found in the specific products "would not be expected to cause adverse health consequences."
PUBLIC HEALTH・8 DAYS AGO
MIX 108

A popular brand of foot spray is involved in a nationwide recall. Blistex, Inc. has announced the voluntary recall of two of their Odor-Eaters spray products due to the presence of benzene. According to details released by the U.S. Food and Drug Administration, the company is recalling "a total of...
HEALTH・10 DAYS AGO
WHEC TV-10

Kroger is pulling over a dozen desserts due to possible contamination.
GEORGIA STATE・13 HOURS AGO
WOWK 13 News

RICHMOND, Va. (AP) — Virginia health officials announced Friday that they’ve confirmed the state’s first death from a rare inflammatory condition in children linked with the coronavirus. The child was between 10 and 19 years old and lived in the Prince William Health District, the Virginia Department of Health said in a news release. To […]
WEATHER・5 DAYS AGO
Macon Telegraph

Oregon Lox Company of Eugene, Oregon announced earlier this month that it is voluntarily recalling brands of Wild Cold Smoked Keta Salmon Lox. This recall is due to some of the salmon may have potentially fatal bacteria, listeria, in young children, elderly people, and others with weakened immune systems. According...
EUGENE, OR・4 DAYS AGO