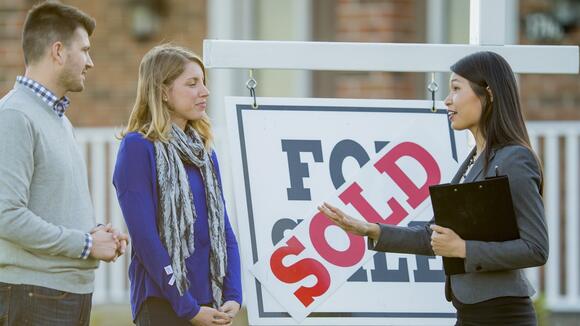 Seasonality plays a vital role in the housing market, as it has a significant impact on the supply and demand of housing. Transactions and prices tend to be above trend in the summer while activity slows in the winter. This year, however, the housing market is still looking unusually strong in what’s typically considered the slower part of the year.

On Thursday, the National Association of Realtors reported that 6.29 million existing homes were sold in September, up from August’s 5.88 million, The Wall Street Journal reported. This is the best month since January, when 6.66 million homes were sold.

These numbers are all adjusted for seasonal swings. Unadjusted, the WSJ noted that September’s existing home sales were about 5% lower than in August, yet 50% higher than in January. This data suggests that buyers and sellers aren’t following the usual patterns. The WSJ pointed out that, as a result, real estate agents might be a lot busier in the fall and winter compared to pre-pandemic seasonal trends.

More: How Much It Costs To Visit the Best (and Scariest) Haunted Houses in the US

“Interest rates are at historic lows, there is a lot of demand for houses in the pandemic and there aren’t enough houses for people to buy,” Daryl Fairweather, chief economist at Redfin, told CNBC. Fairweather also noted that the last decade saw the fewest homes built in the U.S. since the 1960s. According to the WSJ, there were only 2.4 months of homes on the market in September, compared to 3.9 for the same month in 2019.

This could continue to put pressure on home prices. In September, the average home price was $377,000, according to real estate broker Redfin, reported CNBC. That’s up 14% compared to the same month last year and 30% from 2019.

Learn: What To Consider When Choosing a Mortgage Lender
Find: Zillow Finds 2M Renters Can Afford to Buy Homes Thanks to Remote Work During COVID-19 Pandemic

The housing supply problem has been years in the making , the WSJ added, and it could be years before supply can keep up with demand.

No doubt about it -- the real estate market has been white hot in 2021. But if you didn't make a move this year, and you're thinking about buying or selling -- or both -- next year, you'll want to...
REAL ESTATE・2 DAYS AGO
GOBankingRates

To say the 2021 real estate market was competitive might be the understatement of the year -- at least in many areas. White hot buyer demand from 2020 carried over into the new year, creating...
REAL ESTATE・2 DAYS AGO
GOBankingRates

The Biggest Homebuying Trends From 2021

For the second year straight, the real estate market has been nothing short of unprecedented. Historically low interest rates, combined with minimal inventory and an influx in demand, has made 2021 an...
MARKETS・4 DAYS AGO
roselawgroupreporter.com

We are officially in a house-permitting boom and home builder confidence is near an all-time high. A new Zillow® analysis shows how far builders still have to go to fill a 1.35 million new-home construction shortfall caused by a decade of underbuilding. Zillow estimates that, since 2008, there has been...
REAL ESTATE・7 HOURS AGO

American productivity fell by the largest amount since 1960

US labor market productivity tanked in the third quarter. Paychecks grew and the number of hours worked jumped, but workers' output increased only at a moderate pace. Revisions to the data that were initially published a month ago show that the productivity drop was even worse than feared, falling 5.2% on a seasonally adjusted basis. That's the steepest decline in the quarterly rate since the second quarter of 1960 when productivity fell 6.1%.
ECONOMY・8 HOURS AGO
bizjournals

Will Orlando home sales climb even more in 2022? Realtor.com says so.

The trends that spurred more sales and higher prices in Orlando are expected to continue next year. Do you know any young professionals who stand out from the crowd? Orlando Business Journal is looking for 40 promising business executives and professionals under the age of 40 in our area. Nominate today!
ORLANDO, FL・6 HOURS AGO
The Motley Fool

Here's where mortgage rates are sitting today. Should you apply?
REAL ESTATE・8 HOURS AGO
The Motley Fool

6 Real Estate Trends to Watch Out for Next Month

Buying or selling a home soon? Expect these real estate trends to impact your decision.
REAL ESTATE・8 HOURS AGO

4 Questions to Ask Before Buying a Home in 2022

Run through this list before moving forward with a home purchase.
REAL ESTATE・10 HOURS AGO
The Motley Fool

Housing Supply and Demand in 2022: What to Expect

2021 saw an extreme imbalance in housing supply and demand. Will 2022 suffer the same fate?
REAL ESTATE・8 HOURS AGO
realtybiznews.com

American housing inventory is officially at crisis level, according to a new report. Redfin revealed this week that the number of active listings in the U.S. housing market hit an all time low on November 28, down a whopping 23% from the same period one year ago. What’s more, active...
REAL ESTATE・1 DAY AGO
Reuters

BENGALURU, Dec 7 (Reuters) - The rise in U.S. house prices will slow to half its double-digit rate next year but still outstrip increases in consumer prices and wages, according to a Reuters poll of property analysts, who said affordability would worsen over the next two to three years. Often...
REAL ESTATE・22 HOURS AGO
probuilder.com

In the third quarter of 2021, price growth began to normalize after months of record highs and inventory rose slightly across the nation, but first-time buyers still struggled in a competitive seller’s market, according to NerdWallet. Average quarterly home prices were listed at 5.3 times the median first-time home buyer income, and many inaugural buyers were also priced out of the housing market by older competitors backed by existing equity.
REAL ESTATE・1 DAY AGO
bdmag.com

A recent analysis reveals that Pittsburgh has had the largest decline in residential lending activity.
REAL ESTATE・1 DAY AGO
moodyonthemarket.com

A new report from Stessa looks at the total number of jobs added per new housing unit—by location—over the past 10 years throughout the United States. That’s as the nation faces a housing inventory shortage with prices on the rise. Stressa also says locations with a higher number of jobs added per housing unit are more likely to experience housing shortages. Stressa tells us more:
MICHIGAN STATE・4 DAYS AGO
The Motley Fool

Don't find yourself wishing you'd held onto your home.
REAL ESTATE・2 DAYS AGO
NBC Dallas-Fort Worth

The Fort Worth housing market continues to set records even as home sales slowdown. So the question is, what is driving this increase?. We talked to a North Texas realtor for some insight. As of right now, the median home price in Fort Worth is at $310,000. That's according to...
FORT WORTH, TX・4 DAYS AGO
Motley Fool

Home prices rose in September, but at a slower pace than in August. Home prices rose 19.5% in September compared to the previous year. That's a substantial increase, but it's a lower one than we saw in August. It's not a secret that homes have been overwhelmingly unaffordable since the...
REAL ESTATE・5 DAYS AGO
Lassen County News

Since 2010 California has added more jobs than homes

The release of updated Consumer Price Index data in November provided new evidence that the U.S. economy is in an inflationary period. The CPI rose by 6.2 percent from October 2020 to October 2021, the highest annual rate in three decades. Rising costs have shown up in many sectors of the economy including energy, transportation, and food, but perhaps the most worrying increase is in the cost of housing.
CALIFORNIA STATE・6 DAYS AGO