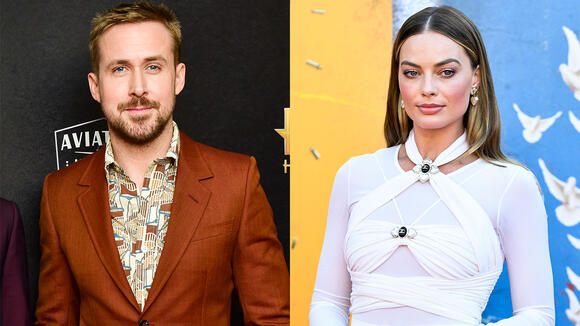 Ryan Gosling ’s life is about to get plastic fantastic.

The actor is in final negotiations to join Margot Robbie in Warner Bros.’s live-action take on Barbie , The Hollywood Reporter has confirmed.

Greta Gerwig and Noah Baumbach, the duo known for their quirky and critically loved dramas, wrote the script for the long-gestating project with Gerwig set to direct.

Robbie is starring as Barbie and producing the project via her LuckyChap banner alongside LuckyChap’s Tom Ackerley. Mattel Films’s Robbie Brenner and Paddington’s David Heyman are also producing.

Plot details are being kept deep in the Malibu Dream House.

Gosling was offered the role in the summer but due to scheduling issues declined. When the feature project got pushed back, it allowed for an opening.

Don’t call it a comeback, because Freddie Prinze Jr. has been here for years. However, there’s something new on his resume that hasn’t been there since the aughts. Last month, Netflix confirmed that Prinze Jr. would star opposite Aimee Garcia for director Gabriela Tagliavini in an as-yet-untitled project, marking his return to a top billed acting role, and in a holiday romantic comedy at that. When news broke, fans went wild because it had been years since Prinze Jr. signed on for such a starry role after building an impressive resume early in his career with I Know What You Did...
MOVIES・3 DAYS AGO
The Hollywood Reporter

The latest trailer for HBO Max’s Peacemaker shows off a (slightly) more contemplative side for John Cena’s title character. The series, which premieres Jan. 13, picks up after the events of The Suicide Squad and follows the hero(?) as he joins a new team while remaining someone who believes in peace, no matter how many people he has to kill to attain it. But the trailer (which follows an earlier teaser introducing members of the team) reveals … maybe that’s not always the case anymore? Peacemaker hesitates to take out a target when there are kids around despite the urging of Clemson...
TV SERIES・3 DAYS AGO
The Hollywood Reporter

No Time to Die star Ana de Armas is in and Scarlett Johansson is out in Apple Original Films’ adventure pic Ghosted, to be directed by Dexter Fletcher and produced by Skydance Media. De Armas will now star opposite Chris Evans in the romantic action-adventure film and executive produce; Evans produces alongside David Ellison, Dana Goldberg, Don Granger and Jules Daly. Evans and Johansson, known for playing Captain America and Black Widow, respectively, in the Marvel Cinematic Universe, had originally teamed up for Ghosted. The deal for the Apple film was the second Johansson signed after filing her lawsuit against Disney over...
MOVIES・3 DAYS AGO
Variety

Jurnee Smollett has landed the female lead in “The Burial,” a new courtroom drama from Amazon Studios. The “Lovecraft Country” actor will star opposite Jamie Foxx and Tommy Lee Jones in the Maggie Betts-directed project. Based on a true story, the film follows a bankrupt funeral home owner who decides to sue a rival businessman over a handshake deal gone wrong. The owner hires a flamboyant attorney (Foxx) to handle the case. Smollett will play Foxx’s opposing counsel, sources said. Betts is directing from a script written by Doug Wright. Producers on the film include Bobby Shriver via his Bobby Shriver Inc....
MOVIES・18 DAYS AGO

One of Ryan Reynolds' strangest movies has a new streaming home. It's not Green Lantern, instead, RIPD is on HBO Max. That's right, the bizarre supernatural police action movie starring Jeff Bridges alongside Reynolds. It was released in 2013, with a lot of fanfare. To be fair, this made a ton of sense. Bridges and Reynolds are usually hits with audiences. But, it's important to note that this is three years before Deadpool and the star would reach an entirely different echelon of name recognition and love from the fans. Sadly, RIPD probably isn't getting a sequel. This is sad to think because Reynolds talked to IndieWire about that possibility back in 2013.
MOVIES・2 DAYS AGO
ETOnline.com

Nicolas Cage is getting some real recognition for his latest film, Pig. The celebrated star walked the red carpet at this year's Gotham Awards, and opened up about the critical love for his indie drama. Cage joined co-star Alex Wolff at the star-studded show in New York City and the...
MOVIES・6 DAYS AGO
TVOvermind

One of the Hollywood actors who has proven his versatility and wide range in acting is Ryan Gosling. He may have started out in Hollywood at such a young age, but he did not allow the pressures of being a child star get to him. A lot have tried, but only a few have succeeded. Instead of partying the night away, and giving in to the perils of fame and fortune, Gosling continued to focus on his craft, which in turn allowed him to take on bigger and better roles. Here are five movie scenes where Ryan Gosling’s acting ability is proven:
MOVIES・8 DAYS AGO
whowhatwear

I would say that 90% of my camera roll is composed of up-close screenshots of celebrities' faces. And, confession time, 75% of said 90% (sorry, is this getting confusing?) is composed of Margot Robbie. Basically, I'm obsessed. Be it her expertly executed cat eye, the perfect pop of pink blush,...
BEAUTY & FASHION・21 HOURS AGO

With the recent news that Nicolas Cage had been cast as Count Dracula in Chris McKay’s Universal monsters movie Renfield, further announcements are coming in. The latest addition is Awkwafina, in an as yet unspecified role. Renfield stars Nicholas Hoult in the titular role, as Dracula’s henchman. It appears as...
MOVIES・4 DAYS AGO
Collider

Dune and The Suicide Squad actor, David Dastmalchian is joining the ever-growing, star-studded cast of 20th Century Studios’ upcoming Boston Strangler film. According to The Hollywood Reporter, Dastmalchian will be joining Keira Knightley (Pirates of the Caribbean: The Curse of the Black Pearl), Carrie Coon (The Leftovers), Alessandro Nivola (The Many Saints of Newark), and Chris Cooper (American Beauty). Dastmalchian will be taking on a very important, but yet-to-be-disclosed role in the film from writer and director, Matt Ruskin (Crown Heights, City of Dead Men).
MOVIES・6 DAYS AGO
Gamespot

Actor Sarah Snook (Succession) will reportedly take over the lead role Elisabeth Moss (The Handmaid's Tale) was originally set to play in the upcoming horror-thriller Run Rabbit Run, according to Deadline. Moss has had to step down due to a scheduling conflict. Via IMDb, the film's synopsis is as follows:...
MOVIES・4 DAYS AGO
The Hollywood Reporter

Why ‘Nine Perfect Strangers’ Star Nicole Kidman Stayed in Character for the Entire Shoot: “There’s a Certain Discipline There”

In Hulu’s limited series Nine Perfect Strangers, a collection of (you guessed it!) nine strangers gather at Tranquillum House, an upscale wellness retreat in California operated by the beguiling Masha Dmitrichenko (Nicole Kidman). The guests (played by an ensemble that includes Melissa McCarthy, Luke Evans and Michael Shannon) have come to Tranquillum to work through their traumas. It isn’t until treatment is underway that they realize Masha is feeding them small doses of psilocybin — and their paths toward healing take some twisty turns. Regina Hall gets to take some of the biggest swings in the series as Carmel, a single...
TV SERIES・2 DAYS AGO

Halle Berry says she set her Razzie for Catwoman on fire but attended the 2011 ceremony to accept it because of how Hollywood views awards. In an interview for Vanity Fair‘s career timeline video series, the Bruised director and star breaks down the highs and lows of her career, from Monster’s Ball to Bond. That includes Berry talking about her critically derided turn as the popular DC Comics character in 2004’s Catwoman. The role earned the Oscar-winner — and first Black woman to win in the best leading actress category — an infamous Golden Raspberry Award (Razzie) from the parody award...
CELEBRITIES・2 DAYS AGO
The Hollywood Reporter

Tom Holland is taking on the role of Fred Astaire. While promoting Spider-Man: No Way Home in London, the actor told the Associated Press that he’ll play the iconic actor-singer-dancer in an upcoming film for Sony. “The script came in a week ago,” Holland said. “I haven’t read it yet; they haven’t given it to me.” The news comes a few weeks after Spider-Man producer and former Sony chief Amy Pascal told GQ that she wanted Holland for the role in a profile of the actor. “She FaceTimed me earlier. I was in the bath,” Holland told the AP of Pascal. “And we had...
MOVIES・1 DAY AGO
The Hollywood Reporter

From ‘Being the Ricardos’ to ‘House of Gucci’: The Tricky Balance When Playing Real-Life People

Hollywood loves a biopic, and the Academy, in turn, has a history of honoring the actors brave enough to portray a beloved (or at times reviled) figure from recent history — in recent years, the acting prizes have gone to Daniel Kaluuya (Fred Hampton in this year’s Judas and the Black Messiah), Renée Zellweger (Judy Garland in 2019’s Judy), Rami Malek (Freddie Mercury in 2018’s Bohemian Rhapsody) and Olivia Colman (Queen Anne in 2018’s The Favourite). But the job of playing a real, recognizable person from recent history has its burdens. Nailing the look, mannerisms and voice of a public figure...
MOVIES・7 HOURS AGO
Collider

Moving on from The Many Saints of Newark, Alessandro Nivola is boarding yet another period piece. Deadline reports that the star is in talks to join the cast of Fever, Todd Haynes’s biopic featuring Michelle Williams as singer-songwriter Peggy Lee. Nivola is set to star in Fever as Dave Barbour, the talented guitar player who worked with Lee and eventually became her husband before unfortunately succumbing to alcoholism.
MOVIES・4 HOURS AGO
ComicBook

The ongoing public "feud" between celebrity pals Hugh Jackman and Ryan Reynolds continued over the weekend, with a social media post from Jackman "calling out" Reynolds for the placement of an advertising banner for Red Notice, the actor's new Netflix movie with Dwayne Johnson and Gal Gadot. Why? Well, because the placement is less than a block down the street from a large sign celebrating the upcoming Broadway run of The Music Man, starring Jackman and Sutton Foster. Feeling upstaged, Jackman took to social media to remind Reynolds that the Red Notice poster could have gone literally anywhere else in all of New York.
CELEBRITIES・8 HOURS AGO
The Hollywood Reporter

Kristen Stewart, the young but veteran actress who is popular with the public and beloved by film critics, will receive the American Riviera Award — which recognizes “actors who have made a significant contribution to American cinema” — at the 2022 Santa Barbara International Film Festival in recognition of her body of work and Oscar-buzzed portrayal of Princess Diana in Pablo Larrain‘s Spencer, the festival said Monday. The 2022 edition of SBIFF will run from March 2-12. Stewart, 31, will participate in a conversation about her career — which includes notable roles in David Fincher‘s Panic Room (2002), the Twilight series (2008-2012)...
SANTA BARBARA, CA・9 HOURS AGO
Free Press

Marvel doesn’t have a lot of love stories in their films, for example Shang-Chi was all about the main villain and his desire to bring back his wife from death. As for Eternals, it’s all about the love between Sersi, played by Gemma Chan, and Ikaris, played by Richard Madden. To be honest, I hated this movie. In my opinion it wasn’t very good, but both Chan and Madden play the role well as you can imagine.
MOVIES・14 DAYS AGO