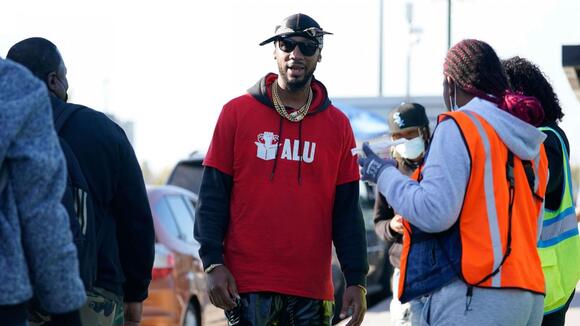 A coalition of Amazon warehouse workers in New York City have officially filed a petition for a union election with the National Labor Relations Board on Monday.

Kayla Blado, the press secretary for the National Labor Relations Board, confirmed to ABC News on Monday that the union petition was filed in the NLRB's Region 29. The petition must now go through the NLRB's formal representation election process before a vote will be held.

The group of workers, which calls themselves the Amazon Labor Union, are being led by a former fulfillment center employee of the e-commerce giant, Chris Smalls. He became the face of the labor movement at Amazon when he was fired under contentious circumstances at the beginning of the pandemic after organizing a demonstration over working conditions amid the health crisis.

The milestone comes some six months after a high-profile union bid by Amazon workers in Bessemer, Alabama , who sought to be represented by the Retail, Wholesale and Department Store Union. The unionization efforts garnered support from lawmakers and even President Joe Biden. Ultimately, however, the election resulted in the Alabama workers overwhelmingly voting not to form a union -- though the RWDSU has accused Amazon of union-busting techniques -- Amazon denies this -- and has filed objections over the election with the NLRB .

"We're completely independent, worker-led through and through, grassroots," Smalls told ABC News Friday of the New York-based group, adding that they felt there were "missed opportunities" with the failed effort in Alabama.

"We're just trying to navigate our way -- we think we know the ins-and-outs of the company better than a third party or an established union," Smalls said in describing why they're seeking to create an independent union. He said he'd worked at Amazon for almost five years before his termination and that his fellow lead-organizers have similar experiences.

MORE: What to know about 'Striketober': Workers seize new power as pandemic wanes

"Amazon has a high turnover rate -- they hire and fire all the time," he said. "We want to protect workers with their job."

"We also want a decent living wage," he added. "I know Amazon's going to claim that they pay better than competitors, but with the cost of living in the New York state area, it's still not sustainable."

He said Amazon can afford to pay workers better, pointing to the wealth of founder Jeff Bezos, who was only recently unseated by Elon Musk as the richest man in the world, per Bloomberg's real-time data on billionaires.

Smalls told ABC News on Friday that they have more than 2,000 workers who have signed union cards, and they plan to deliver these to the NLRB's office on Monday to file for the union election for four facilities in Staten Island. There are approximately 7,000 workers at the facilities, according to Smalls, and organizers need signatures from at least 30% of the workers. He said they're confident they'll secure the remaining portion before Monday.

Kelly Nantel, an Amazon spokesperson, told ABC News in a statement Monday evening that they are skeptical the group obtained enough signatures.

"We’re skeptical that a sufficient number of legitimate employee signatures has been secured to warrant an election. If there is an election, we want the voice of our employees to be heard and look forward to it. Our focus remains on listening directly to our employees and continuously improving on their behalf," Nantel stated.

On Tuesday morning, however, the NLRB's Blado told ABC News that the union had a sufficient show of interest.

A statement released last week from the newly formed coalition of workers said that they built trust among colleagues through months of organizing efforts that included hosting barbecues, handing out food and cold water and holding rallies.

"This is truly a remarkable historical moment for all Amazon workers all over the country," the Amazon Labor Union stated. "Workers under the banner of the ALU have already broken barriers, and we will continue to do so. We're not getting complacent, and we now need the support of the communities more than ever as our fight is just getting started."

The move comes amid a spate of strikes and new employee activism in the workplace as the pandemic wanes in the U.S.

"The timing is, like, perfect, everybody's been paying attention to the strikes, especially Amazon workers as well," Smalls said. "So it's kind of like we all stand in solidarity, even though we're in different industries."

"I think what we're doing here is historical, and I think the Amazon workers are happy to be a part of it," he added.

Nantel, an Amazon spokesperson, told ABC News in a statement Friday that they don't feel unions "are the best answer for our employees."

"Our employees have the choice of whether or not to join a union. They always have," Nantel said. "Every day we empower people to find ways to improve their jobs, and when they do that we want to make those changes -- quickly. That type of continuous improvement is harder to do quickly and nimbly with unions in the middle."

President Joe Biden is expected to warn Russia's President Vladimir Putin there would be consequences for invading Ukraine, a senior administration official said.
POTUS・5 HOURS AGO
The Hill

Senate Majority Leader Charles Schumer (D-N.Y.) on Tuesday night teed up a key vote on a deal struck with Senate Minority Leader Mitch McConnell (R-Ky.) to raise the debt ceiling with only Democratic votes. Schumer, before wrapping up the Senate for the night, moved to tee up a vote expected...
CONGRESS & COURTS・13 HOURS AGO
The Associated Press

Pfizer said Wednesday that a booster dose of its COVID-19 vaccine may offer important protection against the new omicron variant even though the initial two doses appear significantly less effective. Pfizer and its partner BioNTech said that while two doses may not be protective enough to prevent infection, lab tests...
MEDICAL & BIOTECH・4 HOURS AGO

CHICAGO (AP) — Closing arguments are scheduled for Wednesday morning in the case against former “Empire” actor Jussie Smollett, who is accused of staging a racist, anti-gay attack against himself in downtown Chicago to get publicity. The jury is then expected to begin deliberating whether Smollett is...
CHICAGO, IL・12 HOURS AGO
ABC News

Jan. 6 committee to mull contempt charges after Meadows fails to appear before panel

Jan. 6 committee chair Bennie Thompson says the panel will move to hold Mark Meadows in contempt after the ex-Trump chief of staff failed to appear this morning.
CONGRESS & COURTS・33 MINUTES AGO

Accuser testifies Ghislaine Maxwell told her she 'had a great body for Epstein and his friends.' She was 14.

(CNN) — Carolyn said she was just 14 years old when she began to go to Jeffrey Epstein's home in Palm Beach, Florida, two or three times per week in the early 2000s. On one visit, Carolyn was setting up a massage room for Epstein when his longtime companion Ghislaine Maxwell came into the room. Maxwell touched Carolyn's breasts, hips and butt, and commented that she "had a great body for Epstein and his friends," according to Carolyn.
PUBLIC SAFETY・17 HOURS AGO
Reuters

LONDON, Dec 8 (Reuters) - British Prime Minister Boris Johnson apologised on Wednesday after a video surfaced showing his staff laughing and joking about a party in Downing Street during a Christmas COVID-19 lockdown last year when such festivities were banned. For more than a week, Johnson and his team...
PUBLIC HEALTH・3 HOURS AGO