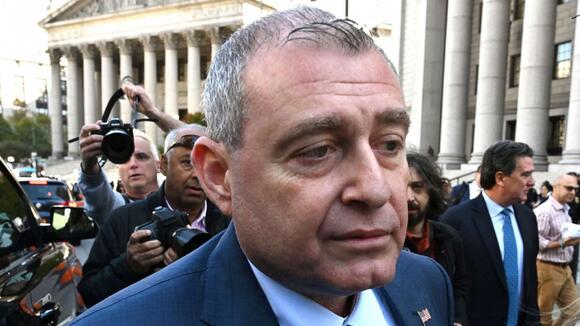 Soviet-born businessman Lev Parnas, a former associate of Rudy Giuliani, was found guilty Friday of making unlawful campaign donations totaling more than $350,000 to two pro-Trump super PACs and a GOP congressman in 2018, acting as a straw donor for a wealthy Russian who wanted to enter the burgeoning marijuana market in the United States.

Co-defendant Andrey Kukushkin was also convicted in the case, which was tried in a Manhattan federal court.

The illegal donations overlapped with Giuliani's quest in Ukraine to unearth information that could damage then-presidential candidate Joe Biden, an effort in which Parnas allegedly positioned himself as a middleman.

"In order to gain influence with American politicians and candidates, they illegally funneled foreign money into the 2018 midterm elections with an eye toward making huge profits in the cannabis business," U.S. Attorney Damian Williams said of Parnas and Kukushkin. "Campaign finance laws are designed to protect the integrity of our free and fair elections -- unencumbered by foreign interests or influence -- and safeguarding those laws is essential to preserving the freedoms that Americans hold sacred."

"Obviously, I'm upset," Parnas said as he left the court. "But at this time I just want to get home to my wife and kids and deal with it. I want to thank my lawyers ... they put up an incredible fight. I've got to just get home, got to reassess what happened in there, and figure out the next steps."

Parnas was also convicted of using a shell company, as well as money belonging to his associate Igor Fruman, to funnel hundreds of thousands of dollars into Republican and pro-Trump political action committees. Fruman previously pleaded guilty in that case.

The defense portrayed Parnas as "in over his head" but not someone who willfully violated any laws.

Parnas was arrested two years ago at Dulles Airport holding a one-way ticket to Vienna. He now faces up to 45 years in prison.

WASHINGTON (AP) — The House committee investigating the Capitol insurrection has interviewed about 250 people so far, its chairman said Thursday, a staggering pace over just five months as lawmakers work to compile the most comprehensive account yet of the violent attack and plan to hold public hearings next year.
CONGRESS & COURTS・17 HOURS AGO
CBS News

Five cases of the Omicron variant have been detected in New York state, Governor Kathy Hochul said Thursday night. The announcement comes just hours after Minnesota health officials said they had identified their first case in a resident who had traveled to New York City in November for a convention that drew thousands of attendees.
PUBLIC HEALTH・3 HOURS AGO
The Associated Press

It’s the moment conservatives have been waiting for. Oral arguments at the Supreme Court on Wednesday represent the best opportunity leaders on the right have had in decades to gut the landmark 1973 Roe v. Wade decision, which codified a woman’s constitutional right to an abortion before a fetus can survive outside the womb.
CONGRESS & COURTS・1 DAY AGO
Fox News

Michigan school shooting: Superintendent says suspect was called to office but 'no discipline was warranted'

Superintendent of Oxford Community Schools Tim Throne described Oxford High School as a "war zone" on Thursday, two days after 15-year-old Ethan Crumbley allegedly fired at least 30 rounds in the hallways, killing four classmates and injuring seven others, including a teacher. Crumbley, who is facing terrorism, murder, and other...
MICHIGAN STATE・1 HOUR AGO

WASHINGTON (AP) — We’ve been here before, with the fate of abortion rights throughout the United States in doubt and awaiting a decision by the Supreme Court. Nearly 30 years ago, the court came within a vote of throwing out the 1973 Roe v. Wade decision that legalized abortion throughout the United States and returning the ability to restrict if not ban abortion to the states.
CONGRESS & COURTS・4 HOURS AGO
The Associated Press

Pushing COVID-19 boosters, Biden says ‘we need to be ready’

BETHESDA, Md. (AP) — With rising numbers of COVID-19 cases predicted this winter, President Joe Biden on Thursday appealed for Americans to get their boosters and get behind his plan to tackle the new omicron variant through wider availability of vaccines and shots, but without new major restrictions on daily life.
PRESIDENTIAL ELECTION・17 HOURS AGO
NBC News

Alec Baldwin said he still doesn’t know how a live round was loaded into the gun in the fatal on-set shooting that killed a crew member this fall and insisted that he did not actually fire the weapon. He gave his account to ABC News’ George Stephanopoulos in his first...
PUBLIC SAFETY・4 HOURS AGO
The Hill

US to restart 'Remain in Mexico' program following court order

The Biden administration on Thursday plans to restart the "Remain in Mexico" program following a court order to reimplement the policy first launched under President Trump while it appeals the decision. The rollout follows weeks of negotiations with Mexico over how to reimplement a plan that under the Trump administration...
IMMIGRATION・12 HOURS AGO

U.K. appeals court sides with Meghan in privacy battle with tabloid publisher over letter to her dad

London — A British court dismissed an appeal on Thursday by a newspaper publisher seeking to overturn a previous ruling that found the Mail on Sunday had breached the Duchess of Sussex's privacy by publishing portions of a letter she sent to her father. Britain's Court of Appeal upheld the earlier High Court decision, handed down in February, that the Mail had in fact breached Meghan's privacy in a way that was "manifestly excessive and hence unlawful."
POLITICS・2 HOURS AGO
NBC News

House passes bill to fund government through Feb. 18, sends it to the Senate

WASHINGTON — The House passed a short-term government funding bill that would prevent a shutdown before the Friday night deadline, sending the legislation to the Senate, where it faces an uncertain future. The House voted 221-212 to advance the continuing resolution. If it is approved by the Senate and signed...
CONGRESS & COURTS・13 HOURS AGO