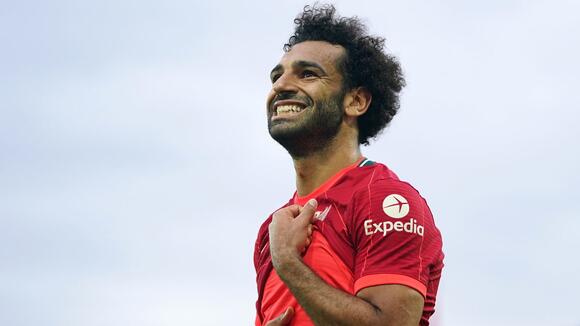 Mohamed Salah's contract expires after next season, and he's expressed his desire to stay put at Anfield.

Mohamed Salah is in the form of his life. He also happens to be out of contract after next season, and with his club future coming into stronger focus, he has spoken out about his wishes.

In an interview with Sky Sports , Salah says that he wants to stay at Liverpool for the rest of his playing career, although he acknowledges that "it's not in my hands." The 29-year-old forward has scored in nine straight games for Liverpool, becoming the first player in club history to do so. He has scored 11 goals in that span, helping the club remain the last unbeaten in the Premier League heading into this weekend's match at Manchester United. He's also helped lead the Reds to the top of their Champions League group halfway through the opening phase of the competition.

When asked about whether he wants to stay at Liverpool or head elsewhere, the Egypt international made it clear.

"This does not depend [on] me, but if you ask me, I would love to stay until the last day of my football [career], but I cannot say much about that. It's not in my hands.

"It depends on what the club wants, it does not depend on me. At the moment I can't see myself ever playing against Liverpool. That would make me sad."

Salah is not the only key player whose future Liverpool must consider. Frontline mates Sadio Mané and Roberto Firmino also have their contracts expire after the 2022-23 season, and retaining all three forwards into their 30s may not be on the docket (Salah and Mané are both 29, Firmino is 30). Liverpool manager Jürgen Klopp is reportedly pushing club ownership to get a deal for Salah done.

Salah is a two-time Premier League golden boot winner, and he has helped Liverpool to Premier League and Champions League title success since arriving at the club in 2017. His seven goals this season are tied for the most in the league with Leicester City's Jamie Vardy—two clear of Mané and West Ham's Michail Antonio and three clear of Firmino.

Liverpool trails first-place Chelsea by a point heading into the weekend, and it could put some distance between itself and Man United with another victory, with the Reds currently having a four-point edge on the Red Devils.

Liverpool players Alisson Becker and Mohamed Salah have been shortlisted for the Best FIFA Football Awards. Alisson is a candidate for the Best FIFA Men's Goalkeeper. He is joined on the shortlist by Edouard Mendy, Gianluigi Donnarumma, Kasper Schmeichel and Manuel Neuer. The Brazilian previously won the award back in...
PREMIER LEAGUE・14 DAYS AGO
ESPN

Second-half goals by Thiago Alcantara and Mohamed Salah earned a below-strength Liverpool a 2-0 win over FC Porto to maintain their 100% record in Champions League Group B on Wednesday. - What every team needs to get out of their UCL group. - ESPN+ viewers' guide: LaLiga, Bundesliga, MLS, FA...
MLS・13 DAYS AGO
fourfourtwo.com

Mohamed Salah regianed Liverpool's two goal advantage after a terrible mistake from Everton skipper Seamus Coleman. The best player in the world, Mohamed Salah has scored his second goal of the game. There is no stopping the Egyptian King and he is now on for a hat trick against Everton.
PREMIER LEAGUE・6 DAYS AGO

Liverpool ace Mohamed Salah admits leaving Chelsea was the making of his career. Salah believes escaping an unhappy spell at Chelsea for first Fiorentina and then Roma in Italy helped set him on the road to ultimately huge success at Liverpool. "It has helped me a lot," he said of...
PREMIER LEAGUE・7 DAYS AGO
Daily Mail

Mohamed Salah is left fuming after a pitch invader tries to get a selfie with him at the end of Liverpool's triumph over Southampton... while Jurgen Klopp criticises his team for missing too many chances

It’s not easy wiping the smile off the face of Mo Salah these days but he was positively fuming at Anfield when a fan tried to nab him for a selfie. Salah was soaking up the applause at the end of Liverpool’s demolition of Southampton when a pitch invader chanced his arm.
PREMIER LEAGUE・10 DAYS AGO
Absolute Chelsea

Chelsea welcome Manchester United to Stamford Bridge in the Premier League on Sunday afternoon. Thomas Tuchel's Blues are leading the way on 29 points after 12 games, losing only once back in September to Manchester City. While Manchester United are under caretaker Michael Carrick, with Ralf Rangnick set to take...
PREMIER LEAGUE・11 DAYS AGO
SkySports

Mohamed Salah scored twice as Liverpool avenged last season's Merseyside derby despair with an imperious 4-1 victory over Everton at Goodison Park. With Everton having taken four points off the then-reigning Premier League champions last term, and inflicted a season-altering injury to talisman Virgil van Dijk on Liverpool's last trip across Stanley Park, the visitors used the 239th meeting with their rivals to ruthlessly exorcise some demons.
PREMIER LEAGUE・6 DAYS AGO

WATCH: Mohamed Salah The MAGICIAN scores a majestic goal to put Liverpool 3-1 in the Merseyside Derby

Liverpool started the game very dominant as the first half ended in a 2-1 scoreline as they lead over their Merseyside rival in Goodison Park. The Red Giants scored early on in the game with Jordan Henderson and Mohamed Salah making a name for themselves on the scoresheet. Although Demarai Gray found a goal for Everton right at the edge of the first half.
PREMIER LEAGUE・6 DAYS AGO
vavel.com

Liverpool were at their relentless best for much of the first half against local rivals Everton at Goodison Park as Jurgen Klopp's side turned on the style. In truth, the visiting Reds could've been out of sight in the opening minutes as Joel Matip and Mohamed Salah squandered glorious openings in the early stages.
PREMIER LEAGUE・6 DAYS AGO
ClutchPoints

Liverpool star Mohamed Salah had nothing to say about how he finished in this year’s Ballon d’Or rankings. Since arriving at Anfield from AS Roma in 2017, Mohamed Salah has constantly been one of Liverpool‘s most reliable goal scorers. This year is no different as the Egyptian striker finished the 2020-21 season with a remarkable tally of 31 goals.
PREMIER LEAGUE・6 DAYS AGO
Yardbarker

Liverpool were in breathtaking form as they swept aside Rafael Benitez's Everton storming into a 2-0 lead inside the opening 20 minutes. Jordan Henderson gave Liverpool the lead in the 9th minute brilliantly curling home from the edge of the box after Andy Robertson's cutback from the by-line. The Reds...
PREMIER LEAGUE・5 DAYS AGO

According to a report today, contract talks between Liverpool and Mohamed Salah are ongoing with the club hopeful of agreement. The 29 year old has been in sensational form this season and has scored 19 goals in all competitions but talks over a new deal seemed to have stalled. As...
PREMIER LEAGUE・4 DAYS AGO
BBC

Liverpool maintained their 100% record in the Champions League this season by seeing off Porto at Anfield. Jurgen Klopp's men, who had already secured top spot in Group B and a place in the knockout stages after winning their first four games, picked up another three points against the Portuguese side.
PREMIER LEAGUE・13 DAYS AGO
The Independent

Liverpool piled more pressure on former manager Rafael Benitez with a record-breaking 4-1 win over Everton at Goodison Park in the 239th Merseyside derby.In maintaining their current Premier League average of three goals per game, Jurgen Klopp’s side became the first top-flight English team to score at least twice in 18 successive fixtures in all competitions.Mohamed Salah’s figures continue to be equally impressive as his double, after Jordan Henderson’s opener, made it 19 goals in as many appearances.𝗥𝗢𝗕𝗕𝗢 𝗜𝗦 𝗔𝗟𝗟 𝗢𝗙 𝗨𝗦 🤩 pic.twitter.com/0gqKemJbd5— Liverpool FC (@LFC) December 1, 2021His first was a beautifully-crafted curling shot across Jordan Pickford into...
PREMIER LEAGUE・6 DAYS AGO
Daily Herald

MANCHESTER, England -- Manchester United has turned to renowned German coach Ralf Rangnick about rescuing the team's season by taking temporary charge. No final agreement has been reached but discussions with United are ongoing about the former Leipzig coach leaving his role as head of sports and development at Lokomotiv Moscow, a person with knowledge of the situation told The Associated Press on Thursday. They spoke on condition of anonymity to discuss ongoing talks.
MANCHESTER, IL・12 DAYS AGO
LFCTransferRoom

Mohamed Salah makes it 2-0 to Liverpool in the Merseyside derby in the 20th minute which causes some Everton fans to leave Goodison Park. The Merseyside derby is the biggest match in Everton's fixture list and with tensions already running high around the blue side of Liverpool, a loss in this match is the worst case scenario.
PREMIER LEAGUE・6 DAYS AGO
Yardbarker

Liverpool's Mohamed Salah has responded to apparent interest from Barcelona manager Xavi. Mohamed Salah is currently the best player in world football and losing him would be catastrophic for Liverpool. Luckily, Salah seems more than happy in Liverpool and if FSG don't mess it up, he seems willing to sign...
PREMIER LEAGUE・2 DAYS AGO
Yardbarker

Everton fans appeared to try and PUNCH Mohamed Salah during the Merseyside Derby midweek. Salah was on top form as Liverpool comfortably defeated their arch-rivals at Goodison Park, with the Egyptian having netted a brilliant brace. It’s no secret that Salah is not a particularly popular figure among the Everton...
PREMIER LEAGUE・3 DAYS AGO
newschain

Liverpool forward Mohamed Salah wants to stay with the club but is becoming frustrated by talks over a contract extension, reports the Liverpool Echo. Salah’s deal expires in 2023. Southampton want to sign former Argentina goalkeeper Willy Caballero, according to Talksport. The 40-year-old left Chelsea at the end of last...
PREMIER LEAGUE・2 DAYS AGO