Millions of families will lose child tax credit soon: Here’s how it will happen 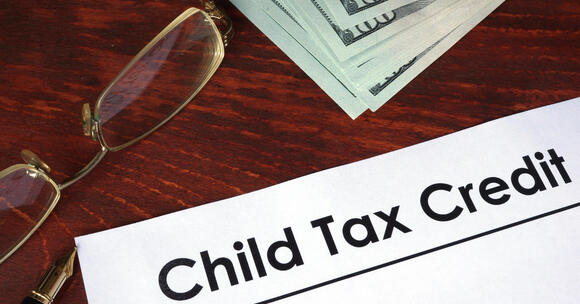 Senator Joe Manchin of West Virginia came under fire this week from progressives after his intent to place an income threshold of $60,000 on child tax credit payments. These payments have been crucial to sustaining families during the pandemic.

Democrats have been debating about the future of the payments, and whether they should continue beyond 2021.

The Niskanen Center says the change would mean 37.4 million children no longer benefit from the child tax credit payments.

Currently, any family that earns less than $150,000 per year is eligible or the child tax credit payments. The benefit was expanded from $2,000 to $3,600 per child in the American Rescue Plan. That was signed into law in March by President Joe Biden.

Half of the tax credit is being paid out in monthly checks issued by the IRS. While the other half will be claimable on 2021 tax returns.

A work requirement has been debated by Republicans and Democrats as a compromise to continuing the child tax credit benefit beyond this year. However, progressive opposition to that has indicated the most vulnerable Americans need the funding and are often unemployed. Worse yet, many Americans are suffering from underemployment – a phenomenon brought on by a large volume of low wage jobs.

Months after accepting the job as public health director in Yates County, Annmarie Flannagan has resigned. It was a difficult ...

The Seneca Falls Police Department is partnering with Ring. The agency announced this week that they have partnered with Ring ...

State legislators who represent the Finger Lakes split along party lines this year in voting on a bill (S528) that would amend ...

The Seneca Falls Police Department reports the arrest of a Marion man following an assault that happened on September 11 ...

I'm confused...i definitely have worked constantly since I was 15, without a employment gap. yes I have 4 children I 100% take care of alone and I don't receive ANYTHING, no support, housing, stamps, ect and the government takes from me all year when I could definitely use it. so why should I not be able to receive this money? because I work I'm pretty sure I'm entitled to it because it's people like me who are providing money to the government for this type of thing and multiple other things I don't agree with... Don't think of a refund as "free money", it's already yours. The money in your refund as an interest-free loan to the government. Filers who overpaid their taxes during the year get a tax refund. You get a tax refund when you pay more taxes to your state government or the federal government – through payroll withholding. the government will cut you a check for the amount overpaid.so again why should parents not be able to receive the money that they're putting into the gover

Can new parents collect the expanded child tax credit on their 2021 tax return?

Parents are able to claim the full $3,600 for their newborn children they had in 2021 on their tax return next year. In order to qualify, it depends on your custody arrangement, income, and number of other children. What month your baby was born in during the year impacts what...
INCOME TAX・1 HOUR AGO
FingerLakes1.com

The final child tax credit payment is just over one week away, here’s what you need to know

The sixth and final child tax credit payment is scheduled for Dec. 15, 2021. That’s next Wednesday. Some will get their regularly paid $250-$300 per child, and others might see a lump sum of up to $1,800. Those that collect their payments via direct deposit will see the payment by...
INCOME TAX・12 HOURS AGO
FingerLakes1.com

There are 4 major changes every year to Social Security, they may impact you

The way Social Security benefits work may change occasionally, but there are four changes every year that happen annually. Millions of people rely on Social Security to survive, so it’s important to be aware of any changes that may impact your life. 9 out of 10 people over the age...
BUSINESS・10 HOURS AGO
FingerLakes1.com

Child tax credit payments end this month, but most parents are still owed up to $1,800

When taxes are filed in 2022 for the 2021 tax year, parents will be able to cash in on the second half of their expanded child tax credit. Before that though, families will see the final payment for their child tax credit advances. That payment date is Dec. 15, and...
PERSONAL FINANCE・4 HOURS AGO

When will COLA go into effect for 2022? How to calculate your Social Security benefits

2022 will see some changes, one of the biggest being a 5.9% increase in COLA, raising Social Security benefits. This is the highest increase in almost 40 years. The reason it’s gone up so much is due to the rapid rate of inflation, which hasn’t slowed since the announcement of the COLA increase.
BUSINESS・1 DAY AGO
FingerLakes1.com

Is the third stimulus check going to impact my 2021 tax return?

Three stimulus checks were sent after the start of the pandemic, with the third one being in 2021 under the Biden administration’s American Rescue Plan. Some are wondering if this check will impact their 2021 tax returns next year. People also want to know if it counts as taxable income.
INCOME TAX・11 HOURS AGO
FingerLakes1.com

2021 was a big year for Social Security changes, especially because of the pandemic and inflation. While some of the changes were more visible this year, like the highest increase in COLA in recent history, there are actually adjustments every year. There were also some really important changes to keep...
BUSINESS・2 DAYS AGO
FingerLakes1.com

Are you getting the December child tax credit payment? You may need to pay it back

Millions of families have received the monthly advanced child tax credit payments this year. Under the American Rescue Act, the amount parents could claim was expanded and half of the credit was paid in advance. Millions of children rose above the poverty line thanks to these payments. Unfortunately, there may...
INCOME TAX・2 DAYS AGO

Returning to work? If you’re from these states you may get a stimulus check for it

Some parents will see $1,800 lump sum payments in less that two weeks

Some families will be eligible to receive a lump sum payment for their children on Dec. 15. Many families did not meet the requirements to need to file taxes in 2019 and 2020, meaning the IRS missed them when finding who to send child tax credits out to. Now, these...
PERSONAL FINANCE・1 DAY AGO
FingerLakes1.com

While there has been a lot of talk about a full-repeal of bail reform – some advocates of substance use disorder victims say it needs smaller modifications to get right. Save the Michaels of the World founder Avi Israel has spent a large chunk of his adult life attempting to help those suffering from addiction.
MENTAL HEALTH・16 HOURS AGO
FingerLakes1.com

Which states are expanding food stamp SNAP benefits for December?

Thirty states have decided on expanding their SNAP benefits for residents following the start of the pandemic. In March the Biden administration expanded monthly benefits federally. While the federal government funds SNAP benefits, how they’re given is up to the states themselves. Here are the states choosing to expand benefits...
POLITICS・1 DAY AGO

What does someone’s “net worth” mean, and how do you calculate it?

When it comes to money and people, the term “net worth” gets thrown around a lot, especially among wealthier individuals. Most people imagine a net worth as a sum of money sitting in someone’s bank account, but it is more than just that. Here is everything you need to know...
ECONOMY・12 HOURS AGO
FingerLakes1.com

Americans have received federal stimulus since the start of the pandemic. In all there have been three checks from the government for families. The first payments were worth $1,200, the second were worth $600, and the most recent ones were worth $1,400. What groups of people are owed a $1,400...
PERSONAL FINANCE・2 DAYS AGO
FingerLakes1.com

How do I get an unrestricted Social Security card and what are they for?

Everyone is given a Social Security number when they’re born or become a U.S. citizen. This helps identify people and keep a record of their employment and earnings. This allows people to benefit from programs down the line. People normally have their card memorized, but it’s good to have your...
PERSONAL FINANCE・2 DAYS AGO
FingerLakes1.com

Stimulus checks worth up to $1,000 are being sent in certain states before Christmas, is one yours?

Christmas is coming and there are some states that plan to give their residents a much needed cash boost. California, Connecticut, New Mexico, Vermont, Tennessee, New Hampshire, and Florida are all working to bring the Christmas cheer in the form of money to cash strapped Americans. There is different criteria...
ECONOMY・1 DAY AGO

Thousands of Americans will see a stimulus check worth $1,100 this month, are you one of them?

California will be sending another batch of checks this month worth up to $1,100 each. This newest batch is expected to arrive in the mail before 2022. These checks are part of California’s Golden State Stimulus II package. The last batch sent 803,000 payments out to residents. This includes 3,000...
PERSONAL FINANCE・2 DAYS AGO
FingerLakes1.com

1.7 million Golden State Checks left to go out before 2020, when will you get your stimulus check?

After the last round of of stimulus checks went out, California has just about 1.7 million left to send. The checks are worth between $600 and $1,100. The goal is for the state to issue the majority of payments before 2022. Just this week 803,000 more checks went out to...
POLITICS・3 DAYS AGO
FingerLakes1.com

One state wants to give single filers $200 before the holidays

Single taxpayers are set to possibly receive a $200 stimulus check if legislation is passed by the House of Representatives. The Republicans in the house want to provide single filers making less than $75,000 with a $200 payment. Married filers must make less than $150,000 in order to receive $400.
POLITICS・3 DAYS AGO