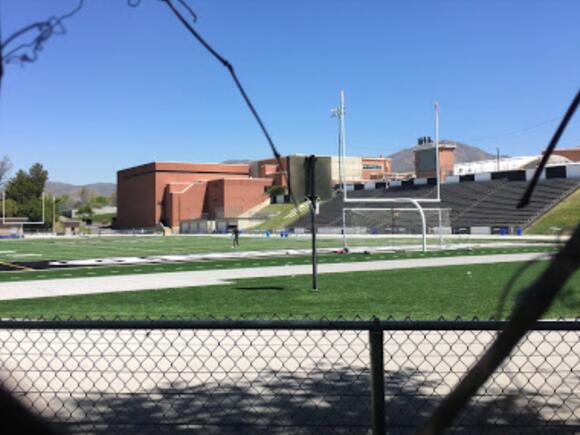 A locakdown was lifted at Highland High School on Friday afternoon after police received an unknown tip.

The police department took to social media Friday morning to say that the lock down was out of an abundance of caution.

They said all students were safe in their classrooms and all exterior doors were locked.

Later in the afternoon, police said they did not find anything during their investigation.

Additional police patrols were deployed at and around the school until the students went home for the day.

A local man has been fighting for his life after contracting COVID-19 in August.
PROVO, UT・4 HOURS AGO
FOX 13 News

A Cache County man was charged Monday with putting methamphetamine in his ex-girlfriend's coffee without her knowledge.
CACHE COUNTY, UT・13 HOURS AGO
FOX 13 News

Police say a driver crashed into multiple parked vehicles and through a fence Thursday evening in Davis County.
DAVIS COUNTY, UT・3 DAYS AGO

In recent years, anger has reached a boiling point over police shootings both in Utah and across the country. FOX 13’s content-sharing partners at The Salt Lake Tribune worked with PBS Frontline to document the process of investigating what may be behind the spike in use of deadly force.
SALT LAKE CITY, UT・1 DAY AGO
FOX 13 News

A police officer and a suspect were both wounded in a shootout Friday night in South Jordan.
SOUTH JORDAN, UT・3 DAYS AGO
FOX 13 News

Layton man smears blood on wife to 'get the devil out'

A man was arrested after he held his wife against her will and smeared blood on her face, according to police.
LAYTON, UT・3 DAYS AGO

A woman was arrested on suspicion of driving recklessly and under the influence with six children in the vehicle.
SOUTH JORDAN, UT・2 DAYS AGO
FOX 13 News

Southern Utah teen still hospitalized after being hit by car

A 15-year-old Hurricane teen is spending her Thanksgiving in a St. George hospital after police say a drunk driver hit her and her friend Tuesday morning.
UTAH STATE・4 DAYS AGO
FOX 13 News

A group of firefighters from Utah County drove to southern California Thursday to help local crews ahead of high winds that are expected to increase fire danger.
UTAH COUNTY, UT・4 DAYS AGO

Student hate crime incident reported on U of U campus

Two University of Utah students are being investigated after an alleged hate crime incident on campus.
MILLCREEK, UT・5 DAYS AGO
FOX 13 News

Should Utah give homeless people a place to camp?

Utah doesn’t have enough shelter beds for people without homes, but these individuals can’t legally camp in a parking strip or a park, near train tracks or under the freeway.
UTAH STATE・3 DAYS AGO
FOX 13 News

Police: Man kicks SLC officer in the face during arrest

A man kicked a police officer in the face and punched another officer during an arrest the day before Thanksgiving.
SALT LAKE CITY, UT・3 DAYS AGO
FOX 13 News

Suspect claims not to remember stabbing man on UTA train

A suspect arrested Tuesday for allegedly stabbing another man on a UTA train claims he does not remember the incident.
SALT LAKE CITY, UT・6 DAYS AGO
FOX 13 News

A large reward is being offered for information leading to the arrest and conviction of the person responsible for a hit-and-run that took the life of a woman in Millcreek last month.
MILLCREEK, UT・6 DAYS AGO
FOX 13 News

Police: Utah teen has seizure after coworker gives her edible

Police say a teenage girl had a seizure Sunday night after eating a gummy containing THC that a coworker gave her.
UTAH STATE・6 DAYS AGO
FOX 13 News

Police are searching for suspects believed to be involved in several armed robberies in Clearfield and Layton.
CLEARFIELD, UT・6 DAYS AGO
FOX 13 News

Utah Transit Authority police are looking for a man they say stabbed another person while riding on a UTA train Saturday.
PUBLIC SAFETY・7 DAYS AGO