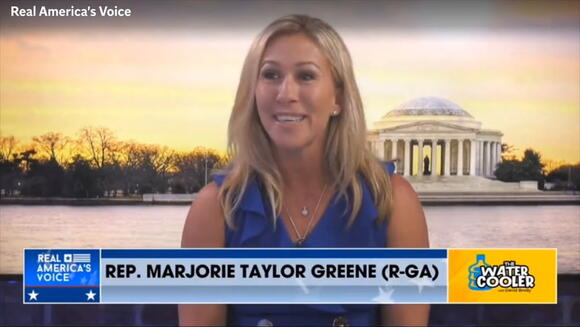 GOP Representative Marjorie Taylor Greene sparred with Liz Cheney and Jamie Raskin on Thursday at the House Judiciary Committee hearing in Washington DC. “You’re a joke!” Ms Greene yelled at Ms Cheney before getting the same insult in return.

Ms Greene asked Mr Raskin, a Democrat who was the lead prosecutor in the second impeachment trial of Donald Trump , when he would investigate Black Lives Matter protest violence.

Mr Rittenhouse is accused of shooting three people during a protest against police brutality in August 2020. The then-17-year-old, who had posted pro-Trump messages on social media, allegedly left his home in Antioch, Illinois, to go to Kenosha in Wisconsin, after a call from militia to help protect businesses in the wake of the police shooting of a Black man.

“This is a joke,” Ms Greene said in response to Mr Raskin’s comment. Ms Cheney – an anti-Trump Republican – replied to Ms Greene calling her “a joke” and told her that she should go back to focusing on Jewish space lasers, a conspiracy theory the Georgia Republican referenced a few years ago that was widely mocked.

“There are too many coincidences to ignore” wrote Ms Greene in November 2018 in her Facebook post , repeating theories about “lasers or blue beams of light causing the fires”, in a conspiracy being linked to the Rothschild banking dynasty.

“I never said that! You’re done. You’re a joke!” Ms Greene shouted at Ms Cheney, returning the same insult, according to CNN. "Why don’t you go investigate something that matters to the American people?”

Mr Raskin added a final swipe at Ms Greene’s laser post: “She denied that she'd ever said that and blamed that on the mainstream media.”

Following the clash, Ms Greene told The Hill : “I told them they’re a joke. This whole thing is a waste. They don’t care about the American people, the national security crisis at the border, our nearly $30 trillion debt.

“They just want to go on and on about the riot and then lie to everyone and call it an insurrection.”

Five people died at the 6 January 2021 Capitol attack, more than 130 police officers were injured and four officers called to the riot died by suicide within the weeks following the attack.

Donald Trump directed supporters to “fight like hell” for his false claims that the 2020 election was “stolen” by the Democrats. More than 600 people have been charged over their involvement in the riot.

Ms Cheney is working to make Mr Trump’s close aides testify about the hours leading up to the Capitol attack, while the former president has filed a lawsuit to block the release of Capitol riot records.

MTG only represents the worst side of this country. She might think she's part of a majority, but hateful nasty people like her are the minority, and the majority of decent people just need to remember that and don't get caught up in her 💩

when are Republicans going to get a clue? they attacked congress while the vp was there. they had a gallows and zip ties to take prisoners. they tried to overthrow the government

and what false evidence was that the phone call with ukraine. how about the russian collusion that you people swear didnt happen. but that mike flynn pleaded guilty twice of doing.

As the select committee formed to investigate the Jan. 6 riot continues to interview witnesses and issue subpoenas, House Republicans who were originally submitted to sit on the panel are quietly working on their own counterinvestigation and plan to release a report on their findings.
CONGRESS & COURTS・1 DAY AGO
WashingtonExaminer

Wyoming Republican Rep. Liz Cheney, vice chairwoman of the House select committee tasked with investigating the Jan. 6 attack on the U.S. Capitol, issued a warning to former President Donald Trump amid his posturing that he wanted to debate members of the committee: Lie, and there will be criminal penalties.
CONGRESS & COURTS・2 DAYS AGO
Business Insider

Rep. Nancy Mace said "QAnon members of the conference" were "never going to listen to leadership, and they're not normal in any way shape or form."
CONGRESS & COURTS・2 DAYS AGO
TIME

Apparently, the way someone animates violence against a colleague matters more than the fact they’re doing it in the first place—at least, if you’re a Republican in the U.S. House of Representatives.
CONGRESS & COURTS・22 HOURS AGO

Congresswoman Marjorie Taylor Greene continued her efforts to whitewash the truth about the 6 January attack on the US Capitol in an interview that was published on Wednesday.Ms Greene made the comments while speaking with Darren Beatie, a former speechwriter for the Trump White House who was ousted after it was revealed that he had attended a conference frequented by white nationalists, on Mr Beatie’s show hosted on Rumble TV, a site seeking to be a conservative alternative to YouTube.She echoed an often-repeated falsehood popular among conservatives during the interview: the assertion that Speaker Nancy Pelosi and other Democrats...
PRESIDENTIAL ELECTION・2 DAYS AGO
TheDailyBeast

When Rep. Marjorie Taylor Greene (R-GA) is the only person defending you, and she uses a racial slur and calls a colleague “trash” in that defense, maybe it’s time to start wondering if you’re on the right side. Greene has thrown her support behind Rep. Lauren Boebert (R-CO) after Boebert...
CONGRESS & COURTS・3 DAYS AGO
WashingtonExaminer

A feud between Republican Reps. Marjorie Taylor Greene of Georgia and Nancy Mace of South Carolina escalated Tuesday, with the two congresswomen appearing separately on the same radio show and Greene claiming that former President Donald Trump planned to endorse a primary challenger to Mace.
WASHINGTON, DC・3 DAYS AGO
Newsweek

The former president was making reference to a "pigs in a blanket, fry them like bacon" chant heard at a protest in 2015.
POTUS・2 DAYS AGO

Congresswoman Marjorie Taylor Greene is now claiming that the January 6th breach of the U.S. Capitol and the violence that ensued was a ‘complete setup’ by Nancy Pelosi and the Democrats. Greene claims that Pelosi intentionally did not allow the National Guard to assist U.S. Capitol security forces and that...
CONGRESS & COURTS・2 DAYS AGO
Fox News

Former President Donald Trump tore into President Joe Biden in a wide-ranging interview Thursday, suggesting that the administration is "knowingly" destroying the country and is distrusted by the American people. During an appearance on "Fox & Friends," Trump shot back at the president over his 2020 comments, where he suggested...
PRESIDENTIAL ELECTION・2 DAYS AGO
Fox News

The spat between the Republican lawmakers comes just one day after Congresswomen Lauren Boebert and Ilhan Omar connected over the phone to discuss an apology for Boebert's anti-Muslim comments.
CONGRESS & COURTS・3 DAYS AGO
WashingtonExaminer

House Republicans Nancy Mace and Marjorie Taylor Greene are in a public and highly personal feud over abortion and religion, amid the ongoing fallout from Islamophobic remarks by some GOP lawmakers. Greene (Ga.) denounced her colleague as “the trash in the GOP conference” — appearing to accuse Mace of being...
CONGRESS & COURTS・3 DAYS AGO
The Independent

Republican Rep. Marjorie Taylor Greene attacked fellow House Republican Nancy Mace on Tuesday, after Mace condemned inflammatory and anti-Muslim comments made by Republican Rep. Lauren Boebert. On Twitter, Greene told Mace to "back up off" Boebert, while accusing Mace of not being conservative and attacking her as "the trash in...
BINGHAMTON, NY・3 DAYS AGO
Newsweek

Georgia Rep. Marjorie Taylor Greene, one of Donald Trump’s staunchest allies in Congress, on Thursday laid out demands for a GOP leader to earn her vote for House Speaker if Republicans are able to retake the majority after the 2022 elections and cast doubt on House Minority Leader Kevin McCarthy being elected to the position. “We know that Kevin McCarthy […]
CONGRESS & COURTS・7 DAYS AGO
Newsweek

"This type of sadistic behavior can NOT be tolerated," Greene tweeted. "They must be held accountable for their reprehensible actions."
NEW YORK CITY, NY・7 DAYS AGO