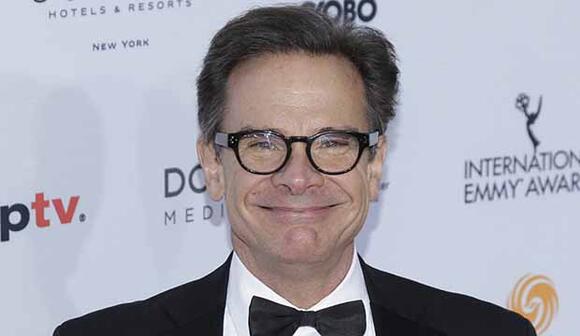 Actor Peter Scolari is dead at age 66 after a two-year battle with cancer. He starred alongside Tom Hanks in “Bosom Buddies” for two years in the early 1980s for ABC. He then followed up with a long-running role as a small town TV producer opposite Bob Newhart on “Newhart,” which brought him three Emmy nominations.

He finally won an Emmy Award in 2016 as Best Comedy Guest Actor after initially not even being nominated. Following Gold Derby’s reporting that summer ( see report here ), Peter MacNicol was deemed ineligible for “Veep” due to appearing in too many episodes of that HBO comedy. Scolari was just out of a nomination in seventh place for “ Girls ” on HBO where he played the father of Lena Dunham ‘s character Hannah, so the Television Academy gave him that nomination slot instead. Watch our short backstage video in the Emmy press room has Scolari discusses that unusual turn of events. You can also view videos below of our red carpet chat with him prior to his Emmy win and a 25-minute interview with him a year later discussing the surreal nature of that experience.

NEW YORK (AP) — Peter Aykroyd, an Emmy-nominated actor and writer on “Saturday Night Live” for the 1979-80 season who later worked with older brother, Dan, on everything from a TV show about the paranormal to such films as “Dragnet” and “Coneheads,” has died at age 66. Peter Aykroyd’s death was first reported last weekend on “Saturday Night Live,” which also tweeted a short film by Tom Schiller he starred in for the show, the noir parody “Java Junkie.” Former “Saturday Night Live’ writer Alan Zweibel posted a tribute on Facebook, calling Aykroyd ”a very funny, really nice guy.”
CELEBRITIES・10 DAYS AGO
Variety

Hulu’s upcoming comedy “Life & Beth” nabbed Laura Benanti for a recurring guest star role, Variety has learned exclusively. Benanti will play Jane, a struggling mother, in the series from Amy Schumer, who writes, directs, executive produces and stars as the titular character. While Beth’s life looks good on paper — from her job as a wine distributor to her long-term relationship and cosmopolitan life in Manhattan — a sudden incident forces her to engage with her past, which changes her life forever. The show will center flashbacks to teenage Beth, which allows her to realize how she became who she is,...
TV & VIDEOS・22 HOURS AGO
survivornet.com

The Power of Gratitude, According to Michael J. Fox. Michael J. Fox, 60, says in a new interview he’s focusing on gratitude and optimism while living with Parkinson’s disease. Fox was diagnosed with early-onset Parkinson’s in 1991 when he was just 29 years old. Expressing gratitude and keeping a positive...
CELEBRITIES・1 DAY AGO
TVShowsAce

The Wendy Williams Show fans are in an uproar. Celebrity guests have been lining up to fill in her spot as she takes this time to focus on her health. There has been a mix of guest hosts, such as Leah Remini. Yet, fans want Sherri Shepherd back. Some of them are wondering where the former The View co-host has been at lately.
CELEBRITIES・1 DAY AGO

Adele reveals the one celeb she still wants to meet: 'I think I would actually cry'

Adele has revealed the one celebrity she'd still like to meet, and the answer may surprise you!. During a makeup video with beauty influencer NikkieTutorials, the 33-year-old music icon gushed about meeting Oprah Winfrey recently for an interview during her "Adele One Night Only" special on CBS. "She’s so normal,"...
CELEBRITIES・14 HOURS AGO
arcamax.com

Dwayne 'The Rock' Johnson has wished his ex-wife, Dany Garcia, a happy birthday. The 'Red Notice' star posted an Instagram video praising the film's producer and his business partner - who he was married to between 1997 and 2007, and has daughter Simone, 20, with - and the "long road" they have travelled together.
CELEBRITIES・3 DAYS AGO
TVShowsAce

‘The Little Couple’ Zoey Klein In Hospital: See Why

Zoey Klein of The Little Couple was in the hospital recently according to her mother Jen Arnold. What happened that caused the young TLC star to be hospitalized? Fortunately, her mother was kind enough to share all of the details on Zoey Klein’s health. She even included a slideshow with some photos of the brave little one in her hospital bed.
CELEBRITIES・19 HOURS AGO
Us Weekly

In another life! Vanessa Lachey recalled how the timing of her relationship with now-husband, Nick Lachey, derailed her plans to date dream guy Ryan Reynolds. When asked who the NCIS: Hawaii star, 41, would pick if Nick, 48, wasn’t an option, Vanessa was quick to name the Deadpool star, 45, whom she revealed she’s had a crush on for decades.
CELEBRITIES・2 DAYS AGO

“Don’t Look Up” is the last shoe to drop for Netflix this awards season, and there’s a 50/50 chance of it making a seismic impact (pun intended). Director Adam McKay assembles a sprawling ensemble that includes Oscar-winners Leonardo DiCaprio (“The Revenant”), Jennifer Lawrence (“Silver Linings Playbook”), Meryl Streep (“Kramer vs. Kramer,” “Sophie’s Choice” and “The Iron Lady”), Cate Blanchett (“The Aviator” and “Blue Jasmine”) and Mark Rylance (“Bridge of Spies”), along with Oscar-nominees Timothée Chalamet and Jonah Hill, to create a satirical look at our species’ (most likely) inevitable demise. DiCaprio has launched himself into the awards conversation, delivering another knockout performance...
MOVIES・14 DAYS AGO
HelloBeautiful

Tiffany served body on a Thanksgiving platter in this Stevie the Designer dress.
THEATER & DANCE・2 DAYS AGO
Cosmopolitan

Good morning, time for another Pete Davidson and Kim Kardashian update you never asked for yet desperately need! These two are still very much going strong, and sources are out here chatting to People about their vibe lately. First up? How Kim feels about Pete. (Hint: He is the perfect post-divorce rebound.)
CELEBRITIES・2 DAYS AGO
CBS LA

‘A Beautiful Soul’: Messages Of Shock At Murder Of Jacqueline Avant Pour In From Bill Clinton, Tyler Perry, Magic Johnson

BEVERLY HILLS (CBSLA) — Former President Bill Clinton, media mogul Tyler Perry, and Lakers icon Earvin “Magic” Johnson are among those mourning Jacqueline Avant, the wife of music legend Clarence Avant, who was killed in a home invasion robbery in Beverly Hills Wednesday. Avant, 81, was fatally shot at about 2:30 a.m. in a home invasion robbery in the 1100 block of Maytor Place. Beverly Hills police say Avant died at a hospital. Syndicated radio host Tavis Smiley and TV and movie producer Tyler Perry both asked the question that was on many minds upon hearing the news – “Who murders an...
BEVERLY HILLS, CA・1 DAY AGO

Following the teaser the other week, Amazon Prime has now released the full-length trailer for Aaron Sorkin’s new film “Being the Ricardos”. Nicole Kidman stars as sitcom queen Lucille Ball and Javier Bardem as her husband Desi Arnaz in a movie that unfolds against one critical production week of their groundbreaking sitcom “I Love Lucy”.
MOVIES・22 DAYS AGO
People

Fredric Aspiras, Lady Gaga's longtime hairstylist and friend, spent months preparing the hairstyles of Patrizia Reggiani, Gaga's character in the new film House of Gucci. In the film, which was released on Nov. 24, Gaga, 35, stars opposite Adam Driver, who plays Reggiani's ex husband, Maurizio Gucci. The film details the story behind Reggiani, now 72, who was convicted of hiring a hitman in the 1995 killing of Gucci after they had ended their marriage.
BEAUTY & FASHION・20 HOURS AGO
People

Dionne Warwick still wants to make sure that Taylor Swift gets her scarf back. On Wednesday, the 80-year-old music icon appeared on the Drew Barrymore Show, where she discussed her hilarious tweets following the release of Red (Taylor's Version) when she learned that Swift's ex-boyfriend Jake Gyllenhaal still allegedly had the infamous scarf.
CELEBRITIES・1 DAY AGO
Hello Magazine

While Al Roker and Deborah Roberts spent the Thanksgiving holiday celebrating with family like many others, they also took it as a chance to pay homage to someone dear. The Today star's wife took to her social media to share that on the occasion, she paid a heartfelt tribute to a late relative.
FAMILY RELATIONSHIPS・20 HOURS AGO
goodhousekeeping.com

Sarah Hyland is totally living her best life with her husband Wells Adams—and she's got a whole Instagram photo dump to prove it. In the IG post, the 31-year-old Modern Family alum dropped some pics from her birthday trip to Big Sur. And in one pic, Sarah is sporting a crop top while on a hike. And wow, she looks extra fit!
CELEBRITIES・21 HOURS AGO
Outsider.com

Chicago Med fans may have noticed that Gaffney has been missing its new Chief of Emergency Medicine most of this season. But there is no reason for concern. The actor is merely taking a temporary break while he works on a side project. On the season six closer of Chicago...
CHICAGO, IL・1 DAY AGO
Hello Magazine

Kate Hudson has been feeling the festive mood lately like so many others, but she decided to take on the season with a completely different look. The actress shared a picture on her Instagram from her stunning family home with a brightly lit Christmas tree behind her. She wore a...
BEAUTY & FASHION・21 HOURS AGO
USA TODAY

At 95, comedy icon Mel Brooks has written a memoir, "All About Me!", detailing his relationships with Carl Reiner, Gene Wilder and wife Anne Bancroft.
BOOKS & LITERATURE・1 DAY AGO