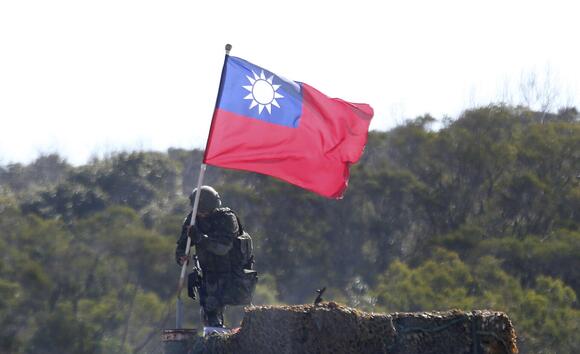 A Chinese ministry leader warned the United States that there is “no room” for compromise when it comes to Taiwan .

Foreign Ministry spokesman Wang Wenbin reiterated the Chinese government's stance on the island it considers a part of its country a day after President Joe Biden said the U.S. would defend the Taiwanese in a military incursion.

“When it comes to issues related to China’s sovereignty and territorial integrity and other core interests, there is no room for China to compromise or make concessions, and no one should underestimate the strong determination, firm will and strong ability of the Chinese people to defend national sovereignty and territorial integrity,” Wang said, according to the Associated Press .

He also called the island, which claims its independence from China, an “inalienable part of China’s territory” and described the issue as “purely an internal affair of China that allows no foreign intervention.”

Biden, in a Thursday night town hall, answered affirmatively when asked about the Chinese hypersonic missile test, which Beijing has denied , and whether he would vow to protect Taiwan.

“Military, China, Russia, and the rest of the world know that we have the most powerful military in the history of the world,” Biden said. “Don’t worry about whether they’re going to be more powerful. What you do have to worry about is whether or not they’re going to engage in activities that will put them in a position where they make a serious mistake.”

“Yes, we have a commitment to do that,” the president responded after the moderator reiterated the question as to whether that would mean the U.S. would defend Taiwan should China attack.

Wang also warned the U.S. that it should “be cautious with its words and actions on the Taiwan issue, and not send any wrong signals to the separatist forces of Taiwan independence, so as not to seriously damage China-U.S. relations and peace and stability in the Taiwan Strait.”

China has ramped up its military, diplomatic, and economic pressure on Taiwan under Chinese President Xi Jinping .

The U.S. has supported Taiwan, quietly sending roughly two dozen U.S. special operations troops and support troops who have been there for at least a year to conduct secret training operations , the Wall Street Journal reported earlier this month.

'Things we did not do in 2014, we are prepared to do now': Sullivan insists Biden 'straightforward' in defense of Ukraine

Chinese officials confronted with President Joe Biden’s decision to boycott the 2022 Beijing Winter Olympics are managing the snub by insisting that the Americans were “not even being invited” to the Games.
SPORTS・17 HOURS AGO
WashingtonExaminer

Defense Secretary Lloyd Austin spoke out against the United States setting red lines that could pull them further into the conflicts in Ukraine and Taiwan.
FOREIGN POLICY・19 HOURS AGO
KREX

BEIJING (AP) — China accused the United States of violating the Olympic spirit on Tuesday after the Biden administration announced a diplomatic boycott of the Beijing Winter Games over human rights concerns. Rights groups have pushed for a full-blown boycott of the Games, accusing China of rights abuses against ethnic minorities. The U.S. decision falls short of those […]
SPORTS・20 HOURS AGO

Leaders of the House and Senate Armed Services committees have reached an agreement on the stalled defense funding bill.
CONGRESS & COURTS・17 HOURS AGO
WashingtonExaminer

Face-off: Biden confronts Putin in bid to deter a Russian invasion of Ukraine

'Strong economic and other measures': Biden warns Putin on Ukraine

The prospect of conflict between Russia and Ukraine persists after President Joe Biden spoke with Russian counterpart Vladimir Putin via a video call.
PRESIDENTIAL ELECTION・17 HOURS AGO

MOSCOW/WASHINGTON (Reuters) – Presidents Joe Biden and Vladimir Putin have a chasm of mutual distrust to bridge when they hold a virtual meeting on Tuesday in the shadow of what the United States believes is a threatened Russian invasion of Ukraine. “A lamentable state,” was how the Kremlin described relations...
POLITICS・1 DAY AGO
birminghamnews.net

Taipei [Taiwan], December 7 (ANI): Slovakian diplomatic delegation arrived in Taiwan despite Beijing's increased threat to the democratic island nation. The fact that a plane carrying a 43-member delegation from Slovakia arrived on December 5th displayed the nation's name and national emblem which is being interpreted that the Central European country is establishing closer ties with Taiwan amidst growing Chinese threat, according to the Taiwan News.
POLITICS・1 DAY AGO
AFP

Beijing warns US will 'pay the price' for Olympics diplomatic boycott

China warned on Tuesday the United States would "pay the price" for a diplomatic boycott of the Beijing Winter Olympics over human rights concerns. The US move -- which stopped short of preventing athletes from attending -- comes after Washington spent months wrangling over what position to take on the Games, beginning in February next year, over what it has termed China's "genocide" of the Uyghur minority. The move drew fiery opposition from Beijing, which threatened unspecified countermeasures, warning the US would "pay the price for its wrongdoing". "Stay tuned," Chinese foreign ministry spokesman Zhao Lijian told reporters at a daily press briefing.
SPORTS・1 DAY AGO
WashingtonExaminer

President Joe Biden, known for his penchant for verbal mistakes and missteps, will put his diplomatic skills to the test as he seeks to deescalate tensions between Russia and Ukraine during his highly anticipated video call with Russian counterpart Vladimir Putin.
PRESIDENTIAL ELECTION・1 DAY AGO

WASHINGTON (AP) — The White House is expected to soon announce that the U.S. will stage a diplomatic boycott of the upcoming Winter Olympics in Beijing to protest Chinese human rights abuses, a move that China has vowed to greet with “firm countermeasures.” U.S. athletes would still compete under such a boycott, a step that President Joe […]
SPORTS・1 DAY AGO
Newsweek

The diplomatic boycott is not a full one—meaning it wouldn't prevent U.S. athletes from competing in the Winter Games.
SPORTS・1 DAY AGO
The Independent

Joining a global chorus of calls for a diplomatic boycott of the 2022 Winter Olympics in Beijing, the Biden administration announced on Monday that no US government officials will be attending the global sporting event to be held in China in February, it has been reported.The Biden administration’s pullout is meant to send a message to China on the international stage without restricting the participation of US athletes, CNN reported, early on Monday citing multiple White House sources. The move was announced by White House press secretary Jen Psaki later in the day.“The Biden administration will not send any diplomatic...
SPORTS・1 DAY AGO
WashingtonExaminer

The Biden administration has failed to meet a congressionally imposed requirement that it share a breakdown of where the Afghanistan evacuation stands, including a detailed listing of whom it airlifted out of Kabul, according to a senior Senate Republican.
FOREIGN POLICY・1 DAY AGO
WashingtonExaminer

Who's in and who's out? Biden's 'democracy summit' snubs attract criticism

The White House is defending President Joe Biden’s Summit for Democracy from critics and allies who argue the administration is unduly judging other nations without addressing problems at home.
PRESIDENTIAL ELECTION・1 DAY AGO
CNN

London (CNN) — The European Union has long been criticized for trying to have its cake and eat it when it comes to China. On one hand, it badly wants a strong economic relationship with its biggest partner for goods trade. On the other, it recognizes the Chinese government is a serial human rights offender and systemic rival.
ECONOMY・1 DAY AGO
Vanity Fair

Biden’s War With China Is Getting Sticky for U.S. Billionaires

There had already been calls for the United States to stage a diplomatic boycott of the upcoming winter Olympics over China’s record on human rights, including its crackdown on pro-democracy protesters in Hong Kong and on its Uyghur Muslim minority. But the pressure intensified last month after the tennis star Peng Shuai accused a top Chinese official of sexual assault and promptly disappeared from the public eye, triggering international outcry and concern for the Olympian and Wimbledon champion’s safety. “It’s something we are considering,” Joe Biden told reporters in November.
PRESIDENTIAL ELECTION・1 DAY AGO
Reuters

WASHINGTON, Dec 6 (Reuters) - U.S. President Joe Biden will warn Russian President Vladimir Putin of severe economic consequences should Russia go ahead with an invasion of Ukraine, a senior U.S. administration official said on Monday. Biden and Putin are to hold a video call on Tuesday as the United...
POTUS・1 DAY AGO