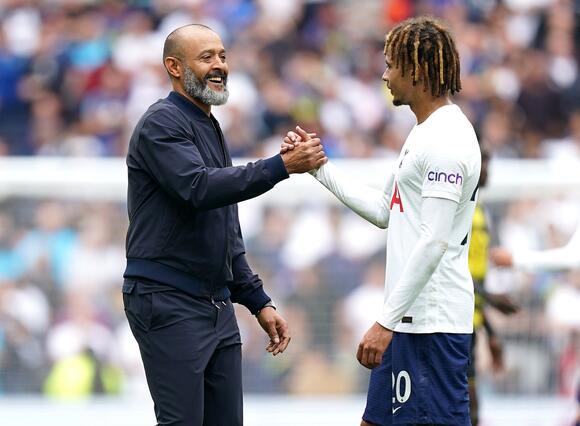 Alli, who endured a torrid season last year and looked set to leave in January, started the campaign well under Nuno in a three-man midfield.

But he was woefully exposed in the first half of the north London derby where Arsenal steamed into a 3-0 lead and he did not return after half-time. 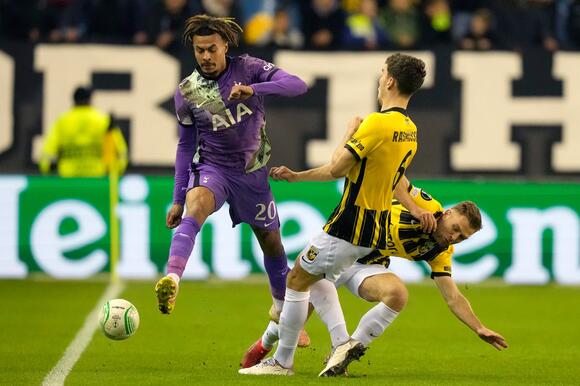 He has not played in the Premier League since and now finds himself back in the Thursday night club, featuring in the Europa Conference League.

The 25-year-old is hardly excelling as he put in a limp display as Spurs lost 1-0 to Vitesse Arnhem and it does not look like he is going to get back in Nuno’s league team any time soon.

But the Portuguese is committed to helping him get back to his best.

“All the players in our squad, we have to realise that during their careers there are ups and downs,” Nuno said. “It is my job to try and make the best out of them, Dele included.

He is working hard, he's committed, so we have to support and find the right solutions to give him confidence so we can have him back in the best way he can.

“I don’t look individually when I judge them, I am very fair. Dele started very well in the competition and now he is not in his best moment so it is up to us to get him back in the best moment he can.

“He is working hard, he’s committed, so we have to support and find the right solutions to give him confidence so we can have him back in the best way he can.”

Nuno ditched his 4-3-3 formation after that horror show at Arsenal, going to a 4-2-3-1 which has produced back-to-back wins in the Premier League.

Dele played in the number 10 role in that system in Holland and Nuno added: “We started the season with three midfielders, with Skippy (Oliver Skipp), Pierre (Emile Hojbjerg) and Dele. 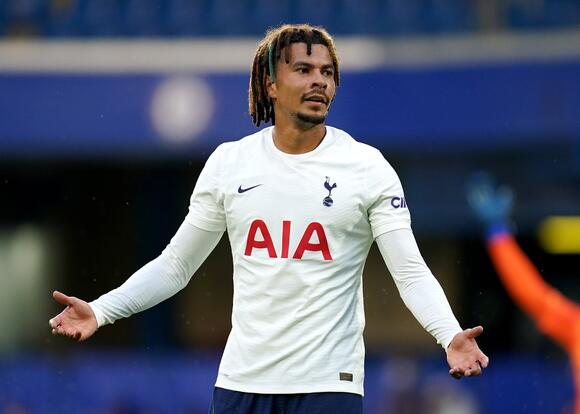 “I think he did well, he did well. Now he played today in a different position. I think he’s versatile enough to do both positions.”

Spurs have no fresh injuries for the trip to West Ham.

The 11 players that played all 90 minutes in the 3-2 win at Newcastle last week did not travel to Holland while Nuno does not think there were any issues picked up by those who were in action on Thursday.

Matt Doherty and Ryan Sessegnon are the only players in the treatment room.

This time? Ferdinand insists Spurs boss Conte will be good for Alli

Rio Ferdinand has thinks Dele Alli could enjoy a 'turning point' with new Tottenham Hotspur manager Dele Alli. The talented Englishman has fallen by the wayside since Mauricio Pochettino's departure in 2019. Speaking passionately about the 25-year-old, Ferdinand said: "I'm sure Dele will be sitting there going, 'I've got to...
PREMIER LEAGUE・14 DAYS AGO
BBC

Former Tottenham striker Darren Bent says Dele Alli needs to consider leaving Spurs. Alli was singled out for particular criticism in the wake of an embarrassing 2-1 defeat to NS Mura in the Europa Conference League. "I think he needs a fresh challenge somewhere else," he said on talkSPORT. “He...
PREMIER LEAGUE・5 DAYS AGO
Tribal Football

Former Tottenham Hotspur manager Nuno Espirito Santo will aim to join a Premier League club for his next job. Nuno's agent, Jorge Mendes, has been keen for the Portuguese to try his hand in Ligue 1. But French outlet Le10Sport reports that Nuno will still likely end up in England.
PREMIER LEAGUE・2 DAYS AGO

Could Nuno Espirito Santo still end up as Everton manager

It’s still perhaps a little early to be thinking about it but if Everton are humiliated by Liverpool tomorrow night, it could be that Rafa Benitez’s days really are numbered. I’ve not been a fanatical cheerleader for Beneitez to lose his job recently and I think every reasonable Everton supporter...
PREMIER LEAGUE・2 DAYS AGO
The Independent

Liverpool are hoping to compound Everton’s misery when they travel to Goodison Park for the Merseyside derby this evening. Jurgen Klopp’s side are on a terrific run of form, having beaten Arsenal and Porto before thrashing Southampton last weekend all in the space of eight days. FOLLOW LIVE: Everton vs Liverpool – latest updatesLiverpool came into the midweek round of fixtures just two points adrift of leaders Chelsea and have already scored 39 goals in 13 Premier League games this season. However, for Everton, fortunes are far bleaker. Rafael Benitez is under increasing pressure after the Toffees limped to a...
PREMIER LEAGUE・1 DAY AGO
The Independent

When Thomas Tuchel comes in after games and scans the other results, he doesn’t automatically go to Liverpool or Manchester City. At least not yet.“There are some teams behind us who show consistency, who show quality, who show determination,” the Chelsea manager said last week. “This is what it is. You have a right to be proud of your competition here, in the Premier League, and for us it feels good because we are in the middle of that race and we want to stay here. I don’t know if it will settle down.”There is a bit of a...
PREMIER LEAGUE・1 DAY AGO
vavel.com

Antonio Conte has only taken charge of one Premier League match for Tottenham Hotspur – a forgettable 0-0 draw away at Everton – but optimism around the white half of North London could not be higher. For the first time under Daniel Levy, Spurs have appointed a serial winner who...
PREMIER LEAGUE・13 DAYS AGO

James Maddison inspired Leicester to a swashbuckling 4-2 win over Watford to ruin Claudio Ranieri’s return. The England international grabbed a goal and two assists for Jamie Vardy as the Foxes closed the gap to the top six. Maddison, fresh from starring in Thursday’s Europa League win over Legia Warsaw,...
PREMIER LEAGUE・4 DAYS AGO
The Independent

John Sillett, fondly known as ‘Snoz’ throughout the world of football because of his large nose, will forever be remembered for leading Coventry to FA Cup glory in 1987.The nickname suited the larger than life Sillett as he certainly had a nose for drama during a career that began at Chelsea and reached its zenith when the unfancied Sky Blues won the cup by beating Tottenham 3-2 in thrilling fashion at Wembley.It remains the only major honour in Coventry’s 138-year history.Sillett, who has died at the age of 85, said his great pal and former Chelsea team-mate Jimmy Greaves coined...
PREMIER LEAGUE・2 DAYS AGO
The Independent

Chelsea are taking on Watford this evening at Vicarage Road as the Blues aim to maintain their spot at the top of the table.All three of the title race contenders are in action tonight and all three face testing away trips: second-place Manchester City travel to Steven Gerrard’s rejuvenated Aston Villa, while Liverpool face a Merseyside derby with Everton at Goodison Park.FOLLOW LIVE: Watford vs Chelsea – latest updatesChelsea’s fixture is on paper the easiest of the three, but Watford have shown promise recently under Claudio Ranieri, particularly going forwards with the threats of Emmanuel Dennis, Ismaila Sarr and Josh King...
PREMIER LEAGUE・1 DAY AGO
San Diego Union-Tribune

Boss Bruno Lage insisted his transfer plan was clear and vowed Wolves would not waste their money in the January sales.The head coach is keen to add to his squad next month as Wolves chase a return to Europe.Lage wanted Lille’s Renato Sanches in the summer and missed out on other targets but is keen to ensure Wolves remain strong for the second half of the season.“One thing is what I want and the people know what I want. I have seen how the competition needs to be inside our building,” he said, ahead of Wednesday’s visit of Burnley.“We need...
PREMIER LEAGUE・2 DAYS AGO
The Independent

Brentford head coach Thomas Frank is not expecting any touchline confrontation with Tottenham boss Antonio Conte on Thursday – as long as the Italian “behaves”.Frank takes his Bees team to north London to face Spurs, where he will come up against a man he calls “one of the best managers in the world”.Both men are known for their exuberant behaviour in the technical area, but Frank is not expecting any issues.“If he behaves there will be no problem,” Frank joked when asked if there could be fireworks. “I like the way he is on the touchline, I only met him...
PREMIER LEAGUE・2 DAYS AGO
The Independent

Raphinha’s stoppage-time penalty clinched Leeds a 1-0 home win against Crystal Palace and three much-needed Premier League points.The Brazilian’s spot-kick in the third minute of added time, after Palace defender Marc Guehi had handled, raised the roof at Elland Road and secured Leeds just their third league win of the season.It was a dramatic finale to what seemed set to be another frustrating night for Marcelo Bielsa’s side, who could have been on the end of a defeat had Palace substitute Christian Benteke not headed a golden second-half chance wide.Leeds’ victory lifted them five points clear of the relegation zone...
PREMIER LEAGUE・2 DAYS AGO
The Independent

A Watford fan suffered a cardiac arrest which caused the Premier League match against Chelsea to be temporarily halted on Wednesday. Referee David Coote took both sets of players off the pitch at Vicarage Road in the 12th minute due to the medical emergency in the Graham Taylor Stand. Medical...
PREMIER LEAGUE・1 DAY AGO
The Independent

Marcelo Bielsa admitted he had been surprised by Leeds forward Tyler Roberts’ tireless display in the vital home win against Crystal Palace.Roberts made his first Premier League start since mid-October in an unaccustomed central striker’s role in the continued absence of Patrick Bamford.The Wales international had a big impact off the bench in last week’s goalless draw at Brighton and followed it up with another performance which clearly impressed his manager.Bielsa said: “He was very important. He didn’t stop fighting, ever. He kept our team alive, present. I didn’t imagine he could run as much as he did throughout the...
PREMIER LEAGUE・1 DAY AGO
The Independent

Manchester City will look to extend their winning run when they take on Aston Villa in the Premier League on Wednesday.Pep Guardiola’s team haven’t lost a match since their 2-0 defeat by Crystal Palace in October, which has meant they entered this gameweek just a point behind leaders Chelsea in the table.It’s likely England defender John Stones will line up for City after missing their win over West Ham at the weekend due to illness.Explaining Stones’ absence, Guardiola said: “We need a guy with a left foot. John was not quite well the last two days, a bit sick,...
PREMIER LEAGUE・1 DAY AGO
San Diego Union-Tribune

Liverpool looks primed to pile on the misery for local rival Everton in the Merseyside derby at Goodison Park
SAN DIEGO, CA・2 DAYS AGO
The Guardian

Cristiano Ronaldo scored twice, including the 800th goal of his career, as United recovered from conceding a bizarre early goal to beat Arsenal
PREMIER LEAGUE・8 HOURS AGO