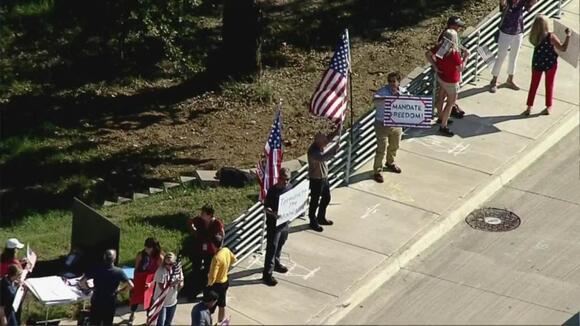 DALLAS (CBSDFW.COM) – Another medical freedom rally is taking place, this time at the the American Airlines Headquarters in Dallas on Oct. 22.

“We are leading the way in this fight because it doesn’t end with us, passengers are next,” an organizer of the event told CBS 11 News via email.

The protest comes just five days after current and former Southwest Airlines workers gathered at the airline’s headquarters in Dallas. Chopper 11 flew over the group on Monday of hundreds of people holding signs that said, “Terminate the mandate,” “freedom not force” and “no jabs for jobs.”

The SWA pilots union later told CBS 11 they were not involved in the protest.

There’s also a push for all airline passengers to be vaccinated but airlines have so far resisted going that far.

As of October 30, those who want to fly in Canada must have at least one dose of the vaccine to do so, Canadian Prime Minister Justin Trudeau announced.

40% the people dying of Cov19 had the vaccine. The fake vaccine doesn’t protect anyone. It’s your false God.

Government has no right to dictate what goes in our bodies. They need to follow the Constitution and, how about a balanced budget?

Get vaccinated protecr yourselves, family and our communities. wear mask its about safety we've lost approximately 700 thousands citizens. This disease is running rapid and we've ALL taken vaccine for less before we could even go to school.

A Jewish couple who were kicked off an American Airlines flight for refusing to store their sacred prayer shawl on the floor have filed a lawsuit against the airline.Roberto and Elana Birman, a couple in their 70s, were flying from Miami to New York on flight 322 in August when they claim the incident occurred.A flight attendant allegedly pulled Roberto’s Tallit bag, a 8.5 inch-by-8.5-inch clear plastic bag holding his prayer book and shawl, out from the overhead bin and asked who it belonged to.When the pair indicated it was theirs, the crew member allegedly threw the bag on his...
LIFESTYLE・11 HOURS AGO
CNET

For the most up-to-date news and information about the coronavirus pandemic, visit the WHO and CDC websites. A federal judge in Louisiana issued a preliminary injunction on Tuesday blocking President Joe Biden's national COVID-19 vaccine mandate for health care workers, just one week before the mandate was to go into effect.
U.S. POLITICS・6 DAYS AGO
WOOD TV8

GRAND RAPIDS, Mich. (WOOD) — Passengers aboard American Airlines flights said they had to wait on the tarmac for hours before arriving at their gate due to a staffing shortage. “We landed and then the pilot came on said there was a problem that they didn’t have enough staffing and so we had to sit […]
GRAND RAPIDS, MI・8 DAYS AGO
The Independent

Approximately 93 per cent of airline and airport employees in the US have now been vaccinated, according to the Transportation and Security Administration (TSA), which says the country’s vaccine mandate “will not impact holiday travel” during November and December.Under the controversial mandate, some 3.5 million federal employees were ordered to be fully vaccinated (or prove a medical exemption) by 22 November, a deadline which passed yesterday.Federal workers, including airline and airport staff, had to receive their last dose of the vaccine no later than 8 November in order to be considered fully jabbed.TSA spokesperson Lisa Farbstein tweeted: “Approximately 93 percent...
INDUSTRY・13 DAYS AGO

NEW BERN, Craven County — Dozens of people gathered in front of CarolinaEast Medical Center Tuesday to protest the vaccine mandate for healthcare workers. The federal mandate calls for all healthcare workers to be vaccinated by January 2022. Some healthcare workers are against the mandatory shot. Protester Rick Hopkins said...
NEW BERN, NC・13 DAYS AGO
fox10phoenix.com

PHOENIX (AP) - The Phoenix City Council is reconsidering a decision to enact a COVID-19 vaccine mandate for its employees, less than a week after the announcement was made, as some city leaders are concerned about the negative impact the mandate would have on city services. "I’m incredibly concerned this...
PHOENIX, AZ・14 DAYS AGO
kdll.org

Protesters denounce vaccine mandates ahead of deadline for federal workers

The deadline for the Biden Administration’s vaccine mandate for an estimated 3.5 million federal workers is today. On the Kenai Peninsula, that mandate extends to employees of the Federal Aviation Administration, the Kenai National Wildlife Refuge and active military, among others. This weekend, demonstrators in Kenai and Soldotna braved subzero...
KENAI, AK・13 DAYS AGO
FOX31 Denver

On the heels of the holiday travel rush, a new study shows flyer complaints have soared to new heights.
DENVER, CO・4 DAYS AGO

With concerns of a rise in COVID-19 cases linked to the new Omicron variant, a new vaccine mandate for all private-sector workers in New York City will be launched.New York City Mayor Bill de Blasio announced the measure on Monday morning, Dec. 6."We've got Omicron as a new factor, we've got colder…
NEW YORK CITY, NY・13 HOURS AGO
CBS San Francisco

SAN FRANCISCO (KPIX) — Passengers gathered for their overseas flights at San Francisco International Sunday, wondering what additional challenges they will face when returning back to the U.S. under the new COVID-19 testing requirement. Among them was Zohaib Valani, a college student traveling to Pakistan with family for the holidays. “Definitely another challenge that’s coming up in the way for travel,” Valani said. “I know it’s really hard to get (COVID testing) appointments, especially during this travel time and not only that the type of test is so crucial for airlines.” Travelers will need to get a negative test result within one...
SAN FRANCISCO, CA・21 HOURS AGO
Business Insider

Researchers at the University of Hong Kong said the variant most likely spread across a corridor in a Hong Kong quarantine hotel.
PUBLIC HEALTH・11 HOURS AGO

Biden considering seven-day quarantine for all travellers to the US

The United States government is considering a seven-day self-quarantine for everyone entering the country amid the emergence of the omicron variant of the coronavirus.The Joe Biden administration is also preparing stricter testing requirements for all travellers, including returning Americans, three federal officials told The Washington Post.The mandatory self-quarantine would be in place even for those with full vaccination and a negative Covid-19 test. People found violating the requirements might be subjected to fines and penalties.The self quarantine-related measures are not in that draft but could be added later, an official said.At present, vaccinated travellers are required to test three days...
U.S. POLITICS・5 DAYS AGO
The Motley Fool

WHEELING W.Va. (WTRF) With the world on high alert and fearing the spread of this new Coronavirus variant, President Joe Biden took another precaution and enforced new travel restrictions. In hope to combat the spread of the coronavirus, President Joe Biden announced his most recent plan on Thursday. Biden voiced his concern about the omicron virus variant and introduced […]
TRAVEL・3 DAYS AGO

Canada's new travel rules for fully vaccinated travellers take effect today (November 30), which is good news to many as it includes no testing required for shorter trips and an expanded vaccine list. To be considered fully vaccinated, a traveller must have received the full series of a vaccine—or combination...
TRAVEL・6 DAYS AGO
allears.net

Both domestic and international travel policies have evolved a lot in the U.S. over the past year due to the ongoing COVID-19 health crisis. While the U.S. recently relaxed international travel restrictions, we’re starting to see some put back in place due to the emerging strain, known as B.1.1.529 or the “Omicron” variant. And, if you’ll be traveling anytime soon, we’re taking a look at all the current restrictions and advisories you’ll need to know about!
TRAVEL・5 DAYS AGO
fox35orlando.com

ORLANDO, Fla. - A flight headed to North Carolina from West Palm Beach, Florida had to be diverted to Orlando because of a possible mechanical issue. According to American Airlines website, Flight 1845 left West Palm Beach on Saturday morning headed to Charlotte, North Carolina. The flight information was then updated to say the plane was being diverted to Orlando International Airport.
ORLANDO, FL・2 DAYS AGO
BOCANEWSNOW