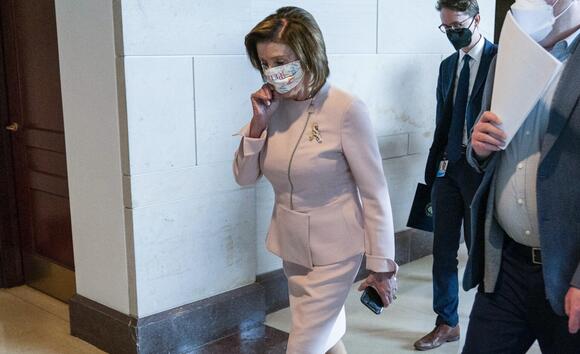 U pon her return to Capitol Hill from a meeting at the White House on Friday, House Speaker Nancy Pelosi told reporters that a deal was within reach on congressional Democrats’ sweeping social spending package.

Pelosi met with President Joe Biden on Friday, with Senate Majority Leader Chuck Schumer joining them virtually, as Democrats seek an agreement on the spending package that comprises key portions of the president’s domestic agenda. Congressional Democrats have thus far failed to reach an agreement between their liberal and centrist members.

“We had a very positive meeting this morning,” Pelosi said. “I'm very optimistic.”

Pelosi did not shed light on when the deal can be expected or when there would be a vote.

Asked if Sens. Kyrsten Sinema and Joe Manchin were on board for a deal, she replied, “That’s up to the Senate and the White House to decide.” Manchin and Sinema have objected to the size and scope of a $3.5 trillion proposal. Manchin has said his price cap is $1.5 trillion, far below what socialist Sen. Bernie Sanders of Vermont and members of the House Progressive Caucus are pushing.

Pelosi called the spending package “bigger than anything we've ever done with Americans,” arguing it will create jobs and address “urgent” climate needs.

“Much of what we need to do has been written,” she said, adding that “just a few decisions” remain.

Create jobs??? Why do they want to work when they made more money staying home. Probably more jobs for all the hundreds of thousands of illegal people in this Country. Democrats don't have to worry about money. They have made themselves rich off the American people. In 9 months they have torn America apart. America was a great nation and soon America will look like a third world country. Look at all the killing going on and people walking in stores and stealing and nothing being done. Thousands upon thousands of illegal people here - where is the money coming from that is being given to them plus a place to live. I guess if they kill us off with Covid or vaccine then they can use the money we worked for. I hate this for my grandchildren. What I don't understand is why the people in the White House are not made to take the vaccine. What are they worried about?????

As the select committee formed to investigate the Jan. 6 riot continues to interview witnesses and issue subpoenas, House Republicans who were originally submitted to sit on the panel are quietly working on their own counterinvestigation and plan to release a report on their findings.
CONGRESS & COURTS・16 HOURS AGO
WashingtonExaminer

Wyoming Rep. Liz Cheney said that it was House Minority Leader Kevin McCarthy’s own fault that the House select committee formed to investigate the Jan. 6 attack on the Capitol had no Republican members appointed by him.
CONGRESS & COURTS・21 HOURS AGO
WashingtonExaminer

Pelosi: Some Supreme Court justices 'need a session on the birds and the bees'

House Speaker Nancy Pelosi said she viewed the Wednesday Supreme Court hearing involving a Mississippi abortion law “as a very dark day,” adding that justices considering overturning judicial precedent legalizing abortion “need a session on the birds and the bees for some of the kinds of statements they make."
CONGRESS & COURTS・20 HOURS AGO
Fox News

House Speaker Nancy Pelosi appeared to say House Democrats won't vote for a continuing resolution that includes a provision blocking any funding to enforce federal COVID-19 vaccine mandates, as Congress inches closer to a government shutdown just before midnight Friday night,. "We're not going to go for their anti-vaxxing. So...
CONGRESS & COURTS・21 HOURS AGO

Will President Joe Biden's $2 trillion social-spending and climate package actually get the Senate's OK this month, as that chamber's leader has promised? Two analysts from opposite ends of the political spectrum say that looks likely.
PRESIDENTIAL ELECTION・20 HOURS AGO
The Independent

Symone Sanders, the chief spokesperson and senior adviser to vice president Kamala Harris, is leaving the White House at the end of the year.The 31-year-old had served the Joe Biden administration for three years, beginning with the 2020 presidential campaign. Ms Sanders was also the national press secretary for senator Bernie Sanders’ 2016 presidential campaign."Symone has served honourably for three years," a source familiar with the matter told CNN. "The president and vice president are grateful for Symone's service and advocacy for this White House. She is a valued member, a team player, and she will be missed. We are...
PRESIDENTIAL ELECTION・1 DAY AGO
WashingtonExaminer

Wyoming Republican Rep. Liz Cheney, vice chairwoman of the House select committee tasked with investigating the Jan. 6 attack on the U.S. Capitol, issued a warning to former President Donald Trump amid his posturing that he wanted to debate members of the committee: Lie, and there will be criminal penalties.
CONGRESS & COURTS・1 DAY AGO
WashingtonExaminer

Former Vice President Mike Pence shrugged off the anger of Trump supporters who are upset he did not attempt to challenge the results of the 2020 election while presiding over Congress in January as lawmakers tallied the electoral votes in President Joe Biden's victory despite pressure by his boss at the time.
PRESIDENTIAL ELECTION・1 DAY AGO

Kevin McCarthy delivers an incomplete message to his GOP members

It hasn't been a great week for Republican unity on Capitol Hill. Most notably, two first-year GOP House members — Georgia's Marjorie Taylor Greene and South Carolina's Nancy Mace — have feuded in ways that turned quite ugly in recent days. The conflict started in earnest when Republican Rep. Lauren...
CONGRESS & COURTS・1 DAY AGO
WashingtonExaminer

The House passed legislation 221-212 on Thursday to fund the government through Feb. 18, but the measure could face a delay in the Senate unless lawmakers resolve a debate over ending President Joe Biden’s vaccine mandate.
CONGRESS & COURTS・15 HOURS AGO
CNBC

Senate passes bill to prevent a government shutdown, sending it to Biden

The president is expected to sign the measure before the end of Friday and prevent a lapse in federal funding. The legislation will keep the government running through Feb. 18. The Senate passed the bill after Democratic and Republican leaders tamped down efforts within the GOP to delay it. The...
CONGRESS & COURTS・1 DAY AGO
WashingtonExaminer

The Senate on Thursday passed a measure to fund the government through Feb. 18 after first defeating an amendment that would have eliminated the Biden administration’s vaccine mandates.
CONGRESS & COURTS・11 HOURS AGO
Markets Insider

Democrats want to raise the debt ceiling, avoid a government shutdown, and pass Biden's agenda all before Christmas. The GOP has other plans.
CONGRESS & COURTS・2 DAYS AGO
Fox News

As Christine Pelosi's potential political future again hit the news, the daughter of House Speaker Nancy Pelosi devoted some of the last week to dwelling on 2016, the year she stepped into the national spotlight in her own right. . Days after Politico reported buzz is building that the younger Pelosi...
PRESIDENTIAL ELECTION・2 DAYS AGO
WashingtonExaminer

The House select committee tasked with investigating the Jan. 6 attack on the Capitol has subpoenaed the phone records of private U.S. citizens but has not subpoenaed the records of members of Congress, according to Indiana Republican Rep. Jim Banks and another GOP aide.
CONGRESS & COURTS・1 DAY AGO

The House passed a bill Thursday that funds the government through Feb. 18 and avoids a short-term shutdown after midnight Friday, but quick Senate approval was in doubt because of a fight over President Joe Biden's COVID-19 vaccine mandates.
CONGRESS & COURTS・15 HOURS AGO
KSN News

The House on Thursday voted to pass a short-term spending bill to fund the government through mid-February, as lawmakers work quickly to avert a shutdown on Friday.
CONGRESS & COURTS・15 HOURS AGO
FOX40

WASHINGTON (AP) — The risk of a short-term government shutdown appeared to be easing late Thursday as the Senate pushed toward final approval of a bill that would fund the government through Feb. 18, sending the measure to President Joe Biden for his signature. Senate Majority Leader Chuck Schumer told reporters it was “looking good” […]
CONGRESS & COURTS・13 HOURS AGO