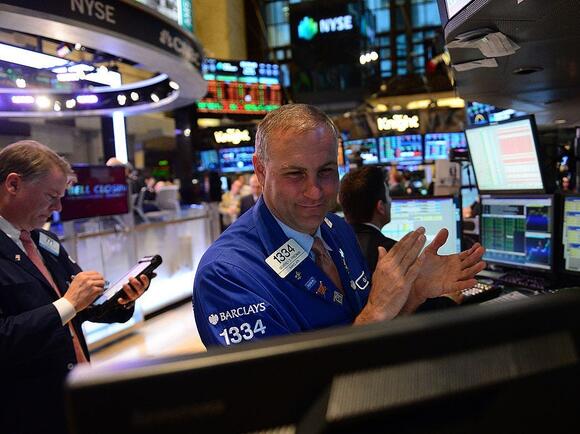 Phunware , a small-cap software developer based in Austin, Texas, extended its two-day gain to as much as 2,189% on Friday as it rode the ongoing hype surrounding former President Trump's foray into the SPAC world.

Digital World Acquisition is a SPAC that announced late Wednesday plans to merge with former President Donald Trump's recently formed Trump Media and Technology Group. DWAC stock soared more than 300% on Thursday as investors piled into the hype of a new social media app from Trump, and was up more than 100% in Friday trades.

Phunware stock is rising in sympathy of that move, as investors point out that the software developer was tapped by the 2020 Trump/Pence re-election campaign to build its app.

"Some are saying $phun and $dwac are connected," Chief Strategist of T3TradingGroup Scott Redler said.

There is no confirmation that Phunware will work with Trump Media and Technology Group to help develop the Truth Social media app. There was no immediate response to a request for comment.

Earlier this week, Phunware said it closed an $11 million acquisition of Lyte Technology, which markets high-performance computers for gaming, streaming, and cryptocurrency mining.

Phunware, which was worth just $79 million on Wednesday, is now valued at more than $1.3 billion amid Friday's surge. The stock was halted for volatility on Friday and eventually pared its gains to 625%.

When asked to comment on the stock price move, Phunware told Insider via e-mail, "There are no official updates at this time. When there are further updates to share, we will be sure to do so via the appropriate Reg FD channels."

A Moldovan-born artist is making waves in the New York art scene with her collection of paintings titled "Trump: Parallel Universe,” depicting the former president in all sorts of scenarios.
NEW YORK CITY, NY・1 DAY AGO
investing.com

PhunCoin by Phunware to Begin Trading

Phunware, Inc. , a fully-integrated enterprise cloud platform for mobile known as Multiscreen-as-a-Service (“MaaS”) that provides products, solutions, data and services for brands worldwide, announced it will begin processing initial issuances of PhunCoin (PHCN), which will be available for trading exclusively on Securitize, the first blockchain-enabled transfer agent registered with the United States Securities and Exchange Commission (SEC).
MARKETS・10 DAYS AGO
1010WINS

2 Iranians charged in US election disinformation campaign, threatening Dems to vote for Trump

Also during that month, Kazemi and Zamani allegedly posed again as part of the Proud Boys, emailing registered Democrats and threatening them with physical injury if they didn’t vote for Trump and change their party affiliation.
NEW YORK CITY, NY・11 DAYS AGO

(Palm Beach, FL) -- Former President Trump's Thanksgiving message hints at a comeback campaign for the White House. In an email blast, Trump wrote, "A very interesting time in our Country, but do not worry, we will be great again--and we will do it together." Since leaving office ten months ago, Trump has been raising money through his Save America PAC in addition to publicly toying with the idea of challenging President Biden in 2024.
PRESIDENTIAL ELECTION・3 DAYS AGO
Markets Insider

The metaverse has the potential to become a $1 trillion annual revenue opportunity across the worlds of advertising, digital events, e-commerce and hardware, according to a new report from crypto giant Grayscale. Grayscale's report, released Wednesday night, comes during a surge in interest in the metaverse after Facebook officially changed...
MARKETS・4 DAYS AGO
MarketWatch

Some large company executives have benefitted handsomely from the practice of earning "spring-loaded" stock options that take advantage of non-public information, but the Securities and Exchange Commission plans to put a stop to it, according to a staff bulletin released Monday.
WASHINGTON, DC・13 HOURS AGO
AFP

Parag Agrawal, who took over Monday as the new head of Twitter, shot from relative obscurity as the platform's technology expert to becoming the latest India-born talent to lead a US tech giant. Agrawal is also the latest India-born star tapped to head a major US-based tech company, following the likes of Google-parent Alphabet's CEO Sundar Pichai and Microsoft CEO Satya Nadella.
BUSINESS・9 HOURS AGO

The wild life of billionaire Twitter founder Jack Dorsey, who eats one meal a day, evangelizes about bitcoin, and had to defend his company in front of Congress

He is famous for his unusual life of luxury, including a daily fasting routine and regular ice baths. Dorsey announced he had stepped down as the CEO of Twitter on November 29, 2021. Visit Business Insider's home page for more stories. From fighting armies of bots to quashing rumors about...
INTERNET・17 HOURS AGO
hypebeast.com

Many brands are starting to see a recovery despite the challenges initially brought on by the pandemic. Some businesses, especially ones that focused efforts on expanding e-commerce ventures, have even seen profits rise even higher than before. HYPEBEAST has rounded up the top business and crypto stories of the week...
STOCKS・2 DAYS AGO
The Independent

Two GOP critics of Twitter and Facebook’s content policies celebrated the news on Monday that Jack Dorsey would step down from helming the social media company he founded in 2006.Mr Dorsey made the announcement hours after news initially broke of his rumoured departure; the former Twitter CEO was replaced by Parag Agrawal, the company’s former chief technical officer. He added in a lengthy statement released on the platform that he would not stay on as chairman or a board member for an extended time.The news drew few reactions from Democrats, who have been eager to see the company (and...
INTERNET・12 HOURS AGO
AFP

US bids farewell to Trump hotel that offered luxury... and access

Occupying an entire city block a short walk from the White House, the Trump International Hotel is a splashy neoclassical palace steeped in more than a century of Washington lore. The towering atrium features a huge skylight that dapples the lobby bar in winter sun as the nation's power brokers savor $140 glasses of wine served in Hungarian crystal, or $10,000 tumblers of vintage Macallan scotch. After a drink, guests with $385 to spare can rejuvenate with a "hydrafacial" skin treatment downstairs before reclining on designer linens in one of the 263 stately, wood-paneled rooms. "It's a beautiful place," one-time White House spokesman Sean Spicer gushed about the hotel, which is set to become a Waldorf Astoria in the New Year, ending six years of ownership by Donald Trump.
U.S. POLITICS・1 DAY AGO

Burry said he'd never shorted crypto, suggested that assets are more overvalued than during the dot-com and housing bubbles, and teased a bearish bet.
STOCKS・14 DAYS AGO
studybreaks.com

Social Media Apps Are the Perfect Platforms for Digital Deception

Cybercrime rates have exploded since the onset of the pandemic, encompassing everything from identity fraud to even some of the most classic of crimes. You open the social media apps on your phone and scroll through your feeds. After a few swipes, you see an ad for a work-from-home position as a “payments clerk.” With your interest piqued, you continue reading to discover the position pays $1,500 a week. Needing no further incentive, you reach out and send your resume to the contact email provided.
CELL PHONES・13 DAYS AGO
aithority.com

Shiba inu coin, dogecoin, bitcoin, and tether all dropped on a popular exchange in India after the country said it was mulling a ban on crypto.
CURRENCIES・5 DAYS AGO
Benzinga

Tesla Inc. (NASDAQ:TSLA) CEO Elon Musk recently responded to a tweet that called attention to the dangers and pitfalls of leveraged Dogecoin (CRYPTO: DOGE) trading. Musk was reacting to a post by Twitter user Mishaboar. Mishaboar tweeted that some holders of the meme cryptocurrency started asking for help after their...
STOCKS・1 DAY AGO
Markets Insider

Cardano founder Charles Hoskinson said he'd been "blindsided" by eToro's delisting of ada for US users. Hoskinson said there were no regulatory events or subpoenas, threats or lawsuits that they were aware of. eToro said it planned to delist ada for US customers by the year end because of regulatory...
BUSINESS・4 DAYS AGO
Markets Insider

Bridgewater has surpassed most other private-fund managers in China with its new 8 billion-yuan fund.
MARKETS・5 DAYS AGO