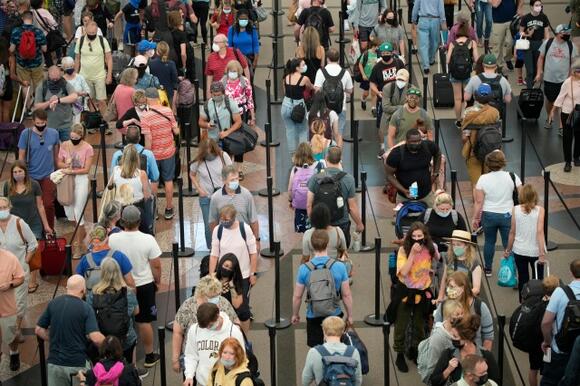 DENVER (KDVR) — Denver International Airport continues to be one of the busiest in the world and travel headaches could continue through the holidays.

On Friday, DIA CEO Phil Washington provided an update on passenger traffic and the impacts the airport is facing as a result of being the fastest recovering large hub airport in the U.S.

“I’m not sure where all these people are coming from. It’s a phenomenon,” Washington said. “The holiday period will be tough.”

Currently, there are 28 lanes. Pending council approval, Washington said the lanes will increase to 42.

In the meantime, DIA needs four new lanes to increase to 600 more people per hour.

Washington said TSA has committed to staffing new lanes and sending crews from other places.

TSA is offering bonuses for hiring and retention.

Washington said the strategic location of DIA is leading to the growth, volume, and passengers.

The airport is currently designed for 50 million annual passengers, according to Washington.

“We appreciate the patience of the traveling public and we intend to make this better,” shared Washington.

Washington explained “VISION 100”, which is getting DIA ready for 100 million passengers in the next 5-8 years.

There will be four pillars to the plan:

“There is going to be an impact as we continue this construction project but this work is necessary to increase volumes,” said Washington. “Its’ like renovating your house while still living in it.”

DIA officials said Sunday that the airport is the third busiest airport in the world. The recent snapshot showed only Atlanta and Dallas-Fort Worth as busier airports than Denver worldwide.

Migrant busing cost state 3 times as much as Denver

Denver weather: Get ready for the 5-day freeze

Denver weather: At least 5 days of freezing cold ahead

Casa Bonita is hiring. What will the jobs pay?

The roads in Aurora's Prides Crossing neighborhood are severely iced over, and residents are fed up with it.
AURORA, CO・18 HOURS AGO
KDVR.com

How much can you make working at Casa Bonita?

Denver coffee shop ranked among top in the US

If you are looking to start your day with a cup of joe or find an afternoon pick-me-up, there are some great coffee shops across Colorado.
DENVER, CO・1 DAY AGO
FOX31 Denver

In the last two months of 2022, most cities in the nation's 100 largest cities saw rents decrease.
DENVER, CO・2 DAYS AGO
KDVR.com

Denver working on policy after meth found in metro libraries

After multiple other cities have discovered levels of methamphetamine in public restrooms and public areas, Denver is working on a policy to insure cleanliness and sanitation.
DENVER, CO・1 DAY AGO
KDVR.com