Mark Cuban compares the crypto boom to the dot-com bubble, defends Robinhood, and calls for stablecoin regulation in a new interview. Here are the 10 best quotes. 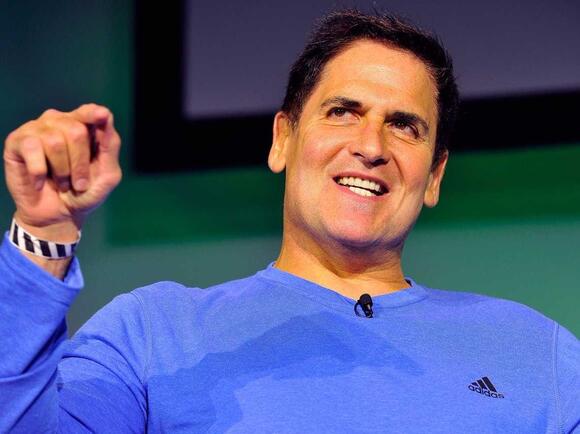 The "Shark Tank" investor and billionaire owner of the Dallas Mavericks also likened the crypto boom to the dot-com bubble, underscored the need to regulate stablecoins, and recommended parents join TikTok to better understand their children.

Here are Cuban's 10 best quotes from the interview, lightly edited and condensed for clarity:

1. "Crypto reminds me of 1995. It's not so much about all the tokens, and all the trading, and all the frenzy that's going around - that reminds me more of the dot-com stock market. What's interesting to me about crypto is the actual networking platforms themselves, and the ability to connect with smart contracts."

2. "You're seeing millions and millions of people investing in crypto, because it's far cheaper and simpler than investing in stocks. I don't think we fully understand the impact that crypto has had."

3. "Robinhood's gamification has done a lot of good, contrary to what a lot of people think . We're not going to close the income gap by taking a hammer and smashing everybody's income down, because there's no efficient way to get that money to the people who need it most. Reducing income inequality is really about enabling people to access appreciable assets."

4. "We should require digital accounts for everybody. It was hard to give millions of people their stimulus checks! That's just crazy in every way, shape, and form. You can say a lot of bad things about Robinhood and its peers, but they enable anybody of a minimum age to own an appreciable asset at a very, very low cost."

6. "Bitcoin is a store of value, just like gold. The bitcoin maxis - the people who eat, sleep, and breathe bitcoin and think it's gonna save the world - believe that it's a reserve currency, and that when fiat crumbles for whatever reason, bitcoin will slide right in as the white knight. I don't see that at all."

7. "Gold is sold as a hedge against the apocalypse, a hedge against inflation. When there are things that look really bad, like a pandemic, it doesn't really respond. Bitcoin is the same way, it's purely a supply-and-demand play."

8. "They're gonna have to regulate stablecoins. There's just so much money there . If one of these was a Ponzi scheme or a fraud, that would create significant instability."

9. "We're in this death war between blockchains. Not all of them are going to survive. It's really going to be the applications and the innovation that drive their success, just like in the early days of the internet."

10. "Parents need to understand how kids learn today because it's different. You've gotta be on TikTok because you've gotta understand how they're consuming information. Same with YouTube. - Cuban gave the example of his son learning about gross margin and other business concepts by watching "Shark Tank" clips on TikTok.

Cuban will soon meet. high crypto regulations.The FED will soon get their cut. It's only a matter of time.. CRYPTO Scam.

These high-flying digital currencies are poised to plummet.
MARKETS・1 DAY AGO
Business Insider

I had no other passions other than really earning money, just stacking it up, so I just worked and saved up quite a bit. That's all I did for three years, and I just needed to do something else to kind of take my mind off of work. Because if I kept working like that, I'd go crazy, and investing seemed like a thrilling, fun journey. It was kind of like gambling.
MARKETS・1 DAY AGO
Markets Insider

Cathie Wood is no stranger to big calls – and she's just made another huge one. The Ark Invest founder and CEO told CNBC Wednesday she thinks the metaverse will be a multitrillion-dollar opportunity that will impact every part of the economy. "It's a big idea that will probably infiltrate...
STOCKS・1 DAY AGO

Elon Musk and Jeff Bezos have sold just shy of $20 billion of their companies' shares between them so far this year, as stock sales by CEOs and insiders soar to a record high. Musk has now offloaded $9.9 billion worth of stock in electric-vehicle maker Tesla, after selling a $1.05 billion chunk at the end of November.
STOCKS・1 DAY AGO
Markets Insider

Tesla CEO Elon Musk has sold another 934,091 shares of the electric-vehicle maker worth $1.01 billion to meet his tax obligations related to the exercise of options to buy 2.1 million shares, regulatory filings showed Thursday. In early November, the world's richest person tweeted that he would sell 10% of...
STOCKS・13 HOURS AGO
dailyhodl.com

Real Vision chief executive and macro guru Raoul Pal is offering his insights into the direction of the metaverse and which crypto project will come out on top. The former Goldman Sachs executive says in a new interview with InvestAnswers that although he’s made huge gains by investing in The Sandbox (SAND), valued at $6.19 at time of writing, it’s hard to say what has value today will hold true down the road.
MARKETS・1 DAY AGO
Axios

Berkshire Hathaway's Charlie Munger said at a conference Friday that markets are now overvalued and "even crazier than the dot-com era," the Australian Financial Review reports. The big picture: Warren Buffett's right-hand man also praised China's ban on cryptocurrencies, which he said should never have been invented, according to the...
STOCKS・6 HOURS AGO

With the pressure and distraction of running Twitter gone, we can expect Dorsey to double down on Bitcoin development with a rebranded Square/Block.
BUSINESS・5 HOURS AGO
Markets Insider

Would You Pay $30,000 For Mark Cuban To Follow You On Twitter? Here's Why Somebody Did Just That

If you’ve ever fantasized about your favorite celebrity or entrepreneur following you on Twitter Inc (NYSE: TWTR), you may have missed a golden opportunity this week. Throughout the week, Charitybuzz completed several auctions in which bidders competed for the right to have high-profile entrepreneurs follow them on Twitter. Charitybuzz is...
INTERNET・2 HOURS AGO
Markets Insider

Danish asset manager Saxo Bank has released its Outrageous Predictions list for markets in 2022. They include Spotify stock sliding as musicians use NFTs to build revenue share. Another prediction sees US inflation soaring to 15% and the Fed moving too late in hiking interest rates. NFTs taking over the...
STOCKS・5 HOURS AGO

Warren Buffett's deputy, Charlie Munger, said markets are crazier now than in the dot-com bubble — and he wouldn't want a crypto fan to marry into his family

Charlie Munger also said US millennials are "very self-centered and very leftist" and that China is right to crack down on cryptocurrency.
MARKETS・11 HOURS AGO
The Motley Fool

Could Buying Hot Cryptocurrency Avalanche Make You a Fortune?

Here's why it might.
MARKETS・11 HOURS AGO
Markets Insider

Legendary investor Ray Dalio has warned people against trying to time the market as uncertainty about the Omicron coronavirus variant shakes stocks. Dalio told CNBC on Tuesday that the most important thing for investors is to be in a safe, well-balanced portfolio and to not try to be too smart.
STOCKS・2 DAYS AGO
Markets Insider

A metaverse ETF has seen inflows surge 548% since Facebook's name change. Here are its top 10 holdings.

The Roundhill Ball Metaverse ETF has seen its assets under management soar 548% since Facebook changed its name to Meta Platforms. The move highlights growing investor interest in the future potential of virtual worlds. These are the top 10 "meta" stock holdings of the almost $1 billion Metaverse ETF. A...
STOCKS・2 DAYS AGO
beincrypto.com

Robinhood Stock Down by 70% Since August, Crypto Revenue Tanks

Shares of Robinhood (HOOD) have dropped by 70% over the past four months. The company has suffered both reputation hits and revenue drops in Q3, which could be behind the drop in valuation. Sponsored. Shares of Robinhood’s (HOOD) stock closed at an all-time low of $25.94 on Nov 30, down...
STOCKS・2 DAYS AGO
Markets Insider

HOOD Stock Prediction: Will Robinhood Go Up If It Adds More Cryptos?

Robinhood (HOOD) stock fell to a new all-time low of $25.75 on Nov. 29. While the stock recovered from the lows and closed at $27.07, it's still way below the IPO price of $38 and trades at a massive discount to its all-time high of $85. What’s the prediction for HOOD stock and will it go back up if it adds more cryptos like Shiba Inu to the platform?
STOCKS・3 DAYS AGO
InvestorPlace

The 7 Best Robinhood Stocks to Buy for December

One of the most remarkable developments that sprouted during the onset of the novel coronavirus pandemic was how quickly longstanding paradigms changed. Prior to the global health crisis, financial analysts warned young people that they weren’t investing in equities. However, the popularity of Robinhood (NASDAQ:HOOD) led to the phenomenon of so-called Robinhood stocks to buy.
STOCKS・4 DAYS AGO