US Grand Prix live stream: How to watch Formula 1 race online and on TV 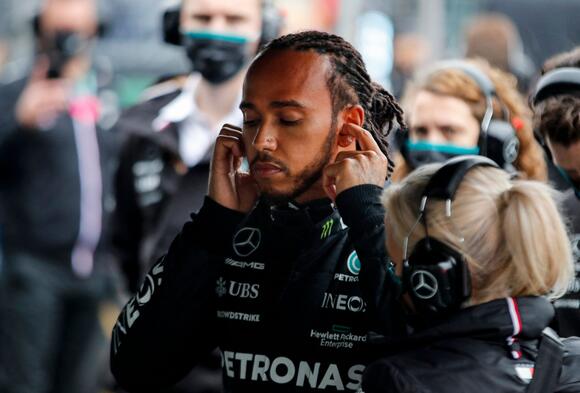 Lewis Hamilton had preparations for the US Grand Prix disrupted after he was locked in his Mercedes room.

The British driver, who is currently six points behind title leader Max Verstappen , was late to his mandatory media session due to the incident.

When the 36-year-old arrived, he explained: “Sorry I am late. I got locked in my room and I couldn’t get out. No joke”. Mercedes said the incident happened due to a faulty lock but they’ll be hoping there are no hiccups in the race on Sunday.

A controversial pit stop at the Turkish Grand Prix saw Hamilton slip to fifth and drop eight points to rival Verstappen, who leads with just six races to go.

But when will the race start on Sunday and how will fans watch the drama unfold? Here’s all you need to know.

The race will take place on Sunday, 24 October at 8pm BST at the Circuit of the Americas.

The race will be shown live on the Sky Sports F1 channel. If you’re not a Sky customer you can grab a NOWTV Day Pass here to watch without a subscription.

What has Hamilton said?

“It is a place of great, great memories, and a great track for wheel-to-wheel racing.

“It is going to be very tight and close between us all. It is important to win every race somehow and maximising our points. It will be incredibly difficult and there will be moments where we can edge out Red Bull.

“A lot can happen in these six races so I am going to take one race at a time and give it everything I have got.”

What has Verstappen said?

“We have always been competitive in the US and have got close to some good results. So it’s about converting that into a win now. We go to every track now knowing that we can fight at least for a podium now, but also a win and that is different to past years.

“We are focussed on doing the best we can and always trying to win the race, and that will be no different in Austin. It will be another close battle this weekend and I am looking forward to that.”

After a dramatic two days of hearings and verdicts, the focus of Lewis Hamilton and Max Verstappen’s title race will return to the track as they battle for pole position ahead of Sunday’s Qatar Grand Prix. Verstappen leads Hamilton by 14 points with three races of the season remaining, but the seven-time world champion cut that lead with a stunning win at the Brazilian Grand Prix last weekend. The Red Bull driver escaped punishment for forcing Hamilton off the track in Sao Paolo, after the FIA declined to re-open their investigation into the incident following a challenge from Mercedes. Verstappen...
MOTORSPORTS・9 DAYS AGO
MLive

For the first time ever, Formula 1 enters the country of Qatar, and at a crucial part of the season, with just a few races to go. A championship could be certified on Sunday as Max Verstappen looks to even further distance himself from Lewis Hamilton. Hamilton picked up a...
MOTORSPORTS・8 DAYS AGO
The Independent

Red Bull team principal Christian Horner has detailed how just “one corner differentiated” them from title rivals Mercedes at the Qatar Grand Prix last weekend.The Losail International Circuit delivered a thrilling race on its F1 debut with the high-speed layout providing plenty of thrills.The vast majority of the 16 corners in Qatar allowed the drivers to turn at medium-high speeds, while turn six was a key low-speed turn.Horner concedes that Mercedes handled the turn better, taken in third gear, with the curve demanding different aerodynamic characteristics that Red Bull struggled more with. “One corner differentiated us all weekend and it...
MOTORSPORTS・10 HOURS AGO
The Independent

Emma Raducanu has been taking advice from Lewis Hamilton on how to cope with life in the spotlight.US Open champion Raducanu made a winning return to Britain at the ATP Champions Tour event at London’s Royal Albert Hall beating Elena-Gabriela Ruse in a not-entirely-serious exhibition match.The 19-year-old was playing on home soil for the first time since her historic Flushing Meadows triumph in September.Afterwards Raducanu revealed Formula One world champion Hamilton has been mentoring her, and even said she was rooting for him to win the BBC Sports Personality of the Year Award, for which she is a...
CELEBRITIES・11 HOURS AGO

Sir Frank Williams who has died at the age of 79, will be remembered as a pioneer of Formula One. Williams Grand Prix Engineering was founded in 1977, with a first F1 victory coming when Clay Regazzoni won the British Grand Prix two years later. Here, the PA news agency...
MOTORSPORTS・1 DAY AGO
CBS Sports

The Superclasico de las Americas, the biggest national team rivalry in all of world soccer, returns on Tuesday as Copa America champions Argentina welcome Brazil to San Juan in CONMEBOL World Cup qualifying. Brazil are already qualified for the 2022 World Cup while Argentina hope to soon join them in what will be their second meeting in qualifying and third since the summer. The first qualifying meeting back in September, however, never finished as it was suspended in the seventh minute as local health officials invaded the pitch as they attempted to remove players who didn't comply with coronavirus restrictions.
SOCCER・13 DAYS AGO
WTAJ

Frank Williams, founder of Formula One team, dies at 79

LONDON (AP) — Sir Frank Williams, the founder and former team principal of Williams Racing, has died. He was 79. Williams took his motor racing team from an empty carpet warehouse to the summit of Formula One, overseeing 114 victories, a combined 16 drivers’ and constructors’ world championships, while becoming the longest-serving team boss in […]
MOTORSPORTS・23 HOURS AGO
The Independent

What time is Ballon d’Or 2021? When is the ceremony and how to watch it online

Lionel Messi is the odds-on favourite to win the Ballon d’Or in a ceremony in Paris and the PSG star will hope to collect a record seventh prize when he makes the short trip to the Chatelet Theatre this evening.The Ballon d’Or returns after an absence – last year’s award was cancelled due a football calendar disrupted by the pandemic, a controversial decision which saw Robert Lewandowski almost certainly denied his first golden ball.Bayern Munich’s Polish striker is among the frontrunners once again, but Messi’s achievement finally winning the Copa America earlier this year has put him top of...
WORLD・5 HOURS AGO

US Open champion Emma Raducanu made a winning return to Britain at the ATP Champions Tour event at London’s Royal Albert Hall, beating Elena-Gabriela Ruse in a not-entirely-serious exhibition match. It was her first match on home soil since July when her Wimbledon debut ended in a fourth-round retirement against...
TENNIS・6 HOURS AGO
The Independent

Manchester United’s Champions League match against Young Boys next week may have to be switched to a neutral venue. Switzerland imposed new restrictions on UK arrivals on Saturday night in response to the emergence of the Omicron variant of Covid-19, meaning anyone coming from the UK would need to provide a negative Covid test and quarantine for 10 days, regardless of vaccination status.
UEFA・5 HOURS AGO
The Independent

Lionel Messi is expected to collect his seventh Ballon d’Or award, as he is the favourite after winning the Copa America with Argentina earlier this year. Messi scored two goals that brought Barca to victory on the Copa del Rey final and he was La Liga’s top goalscorer once more, before his switch to Paris Saint-Germain in the summer.
SOCCER・54 MINUTES AGO