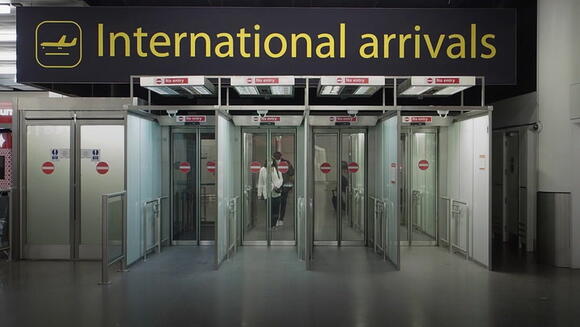 Lateral flow tests, also known as antigen tests, have become available to pre-order ahead of the switch from PCR tests for vaccinated travellers, permitted from Sunday.

The change was announced by the UK government on 14 October, and planned to happen in time for families returning from half-term holidays in the next two weeks.

The government website lists suppliers with prices starting as low as £1. But research by The Independent shows the cheapest tests are accompanied by onerous terms and conditions. In all cases when clicking through, travellers are presented initially with much more expensive options.

In other news, Australia has confirmed several steps towards its reopening to international travel - most significantly, the state of Victoria has announced that it will scrap quarantine for vaccinated international arrivals from 1 November.

The country is planning to open only to Singapore in a “travel bubble” arrangement initially, then to further countries in Asia and Australasia before Christmas.

The introduction of compulsory Covid PCR tests for everyone arriving in the UK has been described as a “huge blow” for the travel industry. The move, announced by Boris Johnson on Saturday, has been welcomed by scientists as a way of buying time to learn more about the Omicron variant.
TRAVEL・2 DAYS AGO
breakingtravelnews.com

Boris Johnson has confirmed travellers touching down in the UK will require a PCR test on arrival from Tuesday. The move comes as authorities seek to contain the spread of a new Covid-19 variant, known as Omicron. Two cases of the variant have already been identified in Essex and Nottingham.
PUBLIC HEALTH・2 DAYS AGO
wincountry.com

WASHINGTON (Reuters) -Canada is set to announce on Friday that it is no longer obliging Canadian travelers returning from short foreign trips to take expensive molecular COVID-19 tests, a government source said on Wednesday. The travel industry complains that the requirement to take PCR (polymerase chain reaction) tests, the most...
BUSINESS・12 DAYS AGO
TravelDailyNews.com

The PCR test in Scotland is boosting travel

By searching online, you can book a test time that fits with your future travel plans. In addition to this, you can get further information such as the location of the testing centre as well as the prices available for PCR tests prior to travelling abroad from Scotland. Wherever you...
TRAVEL・5 DAYS AGO

How to get a Government approved day two lateral flow test

All travellers returning to the UK must take a 'day two' Covid test after arriving home. Vaccinated holidaymakers can now book a lateral flow test (from a private testing provider) to take on – or before – the second day of their arrival home, instead of a more costly PCR test. You cannot take an NHS test for your day two test.
PUBLIC HEALTH・4 DAYS AGO
dallassun.com

New Delhi [India], November 27 (ANI): Amid rising concern about a new COVID-19 variant 'Omricon' first detected in South Africa, India on Friday added several countries to the list from where travellers would need to follow additional measures on arrival in the country. These measures also include post-arrival testing. Countries...
PUBLIC HEALTH・3 DAYS AGO
GreenwichTime

As two cases of the new Omicron variant of the COVID-19 virus have been detected in the U.K., England has mandated a return to mask wearing and PCR tests. Addressing a nationally televised press conference on Saturday afternoon, Prime Minister Boris Johnson said that face coverings will become mandatory again in shops and on public transport across England.
PUBLIC HEALTH・3 DAYS AGO
NWI.com

UK plans new measures to combat the omicron COVID variant, including PCR tests for travelers and ramping up mask-wearing

Everyone who enters Wales from abroad will need to take a PCR test and isolate pending a negative result. The Welsh government announced the move after the UK government brought in several new restrictions in England. It comes as the Omicron variant of Covid-19 has been detected in Brentwood, Essex,...
PUBLIC HEALTH・2 DAYS AGO
boardingarea.com

As part of its steps to try and deal with the new Omicron variant of COVID-19, the UK Prime Minister has just announced that all arrivals to the UK will have to take a PCR test within the first two days of arrival and self-isolate whilst they await the results.
PUBLIC HEALTH・3 DAYS AGO
Sunderland Echo

The Government is bringing back mandatory face masks in shops and on public transport, and PCR tests for international travel, after the first cases of the Omicron variant of Covid were identified in the UK. There is mounting concern over the highly mutated variant, which originated in Southern Africa and...
TRAVEL・2 DAYS AGO
c21media.net

Content London 2021 sneaks in ahead of PCR test deadline

C21 has confirmed Content London will go ahead as delegates will be able to travel to the UK without the need to take a PCR test before 4am on Tuesday November 30, the first day of the event. Anyone arriving in the UK on Sunday and Monday is not required...
PUBLIC HEALTH・2 DAYS AGO
The Independent

Over-60s should postpone travel plans in light of new omicron variant, WHO warns

Over-60s and other people at risk of developing severe COVID-19 symptoms should postpone their travel plans in light of the new omicron variant, the World Health Organisation (WHO) has said.New advice issued today has said that travellers must “remain vigilant” while scientific research is underway to understand how the variant behaves.The WHO have also warned that blanket travel bans will not prevent the international spread of the new omicron variant. It comes after a number of countries, including the UK, EU and US are among t imposed travel bans on South Africa and other parts of Africa.The advice from the...
TRAVEL・40 MINUTES AGO
The Independent

The best new UK hotels that opened in November

From two Scottish heritage properties-turned foodie retreats to a creative hotspot in East London and an arty crashpad in Bristol, here are the UK’s best new openings.Killiecrankie House, Perthshire, ScotlandThis heritage country house hotel – a grand whitewashed building dating from the 1840s – has been transformed by chef Tom Tsappis and sommelier wife Matilda (previously of Elia London supperclub) into a five-bedroom, food-focused retreat. Tasting menu suppers which riff on contemporary and heritage Scottish dishes – from cock-a-leekie to madeleines with black pudding caramel – are served in a sultry navy-walled restaurant, with a heavy focus on local and...
LIFESTYLE・3 HOURS AGO
Travel + Leisure

International travelers heading to the United Kingdom will now have to take a COVID-19 PCR test by the second day of their trip, due to the emergence of the omicron variant. The new rules, which went into effect on Tuesday — just weeks after the country eased entry protocols — require travelers to take the PCR test before the end of day 2 after arriving and self-isolate until they get a negative result, according to the UK government. The new measures will be reviewed in three weeks.
PUBLIC HEALTH・3 HOURS AGO
The Independent

Commuters in London have been reacting to the new rules on Covid which sees the mandatory mask mandate reintroduced in shops and on public transport in response to the omicron variant. Prime Minister Boris Johnson announced the new rules in a press conference on Saturday (27 November) as well as...
PUBLIC HEALTH・3 HOURS AGO
The Independent

PCR tests and self-isolation: What are the new rules for travellers?

PCR tests and self-isolation are back for travellers arriving in the UK. Weeks after international travel rules were eased to allow cheaper and faster lateral flow (antigen) tests, the government has tightened restrictions once again in response to the spread of the omicron variant of coronavirus.At the same time, the previously dormant red list has been expanded and now applies to arrivals from 10 southern African nations.These are the key questions and answers.What are the new rules for travellers to the UK?Anyone arriving from a red list nation – currently South Africa, Angola, Botswana, Eswatini, Lesotho, Malawi, Mozambique, Namibia,...
PUBLIC HEALTH・1 HOUR AGO
The Independent

Labour has demanded the government bolster Covid border measures by reintroducing pre-departure test requirements for anyone travelling to the UK in response the new omicron variant.In a joint letter, the newly appointed shadow home secretary, Yvette Cooper, and shadow health secretary, Wes Streeting, told the government it is an “urgent requirement” with over one million travelling through UK airports each week.It comes after the government dropped requirements for a pre-departure test for vaccinated travellers in the autumn, but in response to the new variant at the weekend re-introduced quarantine for all arrivals until they have received a negative PCR test.The...
PUBLIC HEALTH・2 HOURS AGO
The Guardian

Children aged 12 to 15 years old have been encouraged to get their second dose of the Pfizer vaccine after an announcement by the Joint Committee on Vaccinations and Immunisations (JCVI). All over 40s are now eligible to get their booster shots for Covid-19, with those who are most clinically...
HEALTH・9 HOURS AGO