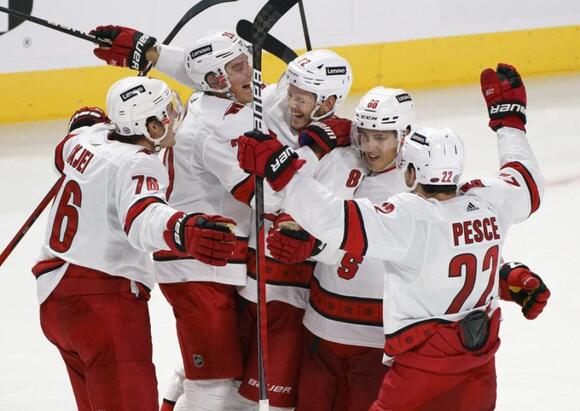 MONTREAL (AP) — Jesperi Kotkaniemi scored his first goal for Carolina in his return to Montreal, helping the Hurricanes beat the winless Canadiens 4-1 on Thursday night.

The 21-year-old Kotkaniemi left the Canadiens for the Hurricanes over the summer after signing a $6.1 million offer sheet. The Finn was booed every time he touched the ice, let alone the puck.

“I didn’t really know what to expect so I just kept an open mind,” Kotkaniemi said about the crowd’s reaction. “It gets your going a little bit. It was a little funny. I laughed when I stepped on the ice”

With 10:37 to go, Kotkaniemi tipped in a shot from Brady Skjei to restore Carolina’s two-goal lead.

“It was a really big relief after those first two games,” Kotkaniemi said. “Our line had a pretty solid night so have to keep building on that and take it into the next game.”

Sebastian Aho had two goals and an assist, Andrei Svechnikov also scored and Vincent Trocheck and Teuvo Teravainen each had two assists.

“That was the game right there. We did a heck of a job there and the killers came up big,” Hurricanes coach Rod Brind’Amour said. “(Andersen) was really good tonight too. That’s the difference in games, but we can’t take all those penalties and then rely on the goalie that much.”

Jake Allen made 29 saves as Montreal dropped to 0-5-0 after reaching the Stanley Cup Finals last season.

Hurricanes: At Columbus on Saturday night.

Five takeaways from the Carolina Hurricanes’ 5-4 win Saturday over the Los Angeles Kings, their eighth road win of the season:. — Canes coach Rod Brind’Amour had a blunt assessment: “At the end of the day it was a bad game for us. Really bad. We’re fortunate to get that one.” Is that blunt enough?
NHL・10 DAYS AGO
CBS Boston

BOSTON (CBS) — Bruins winger Brad Marchand was dominant on Sunday night against the Canucks, scoring a game-tying goal and registering a primary assist on the go-ahead goal, both of which came in the third period of Boston’s 3-2 win. This development no doubt irked many Canucks viewers back in Vancouver, as Marchand has never been the most celebrated player in British Columbia, dating back to his and the Bruins’ Stanley Cup win over the Canucks in 2011. Capping off some chaos. Marchy's tying goal on the power play is tonight's @JagermeisterUSA Shot of the Game!@Bmarch63 | #NHLBruins pic.twitter.com/8mpV8cDTtO — Boston Bruins (@NHLBruins) November...
NHL・2 DAYS AGO
Pro Hockey Rumors

The Department of Player Safety has issued a three-game suspension to Boston Bruins forward Brad Marchand for slew-footing Vancouver Canucks defenseman Oliver Ekman-Larsson last night. As the accompanying video explains:. It is important to note that there are many occasions during the course of a game where players use either...
NHL・1 DAY AGO
WEEI Sports Radio

Boston Bruins left wing Jake DeBrusk has reportedly requested a trade from the team after being a healthy scratch over the weekend. The Bruins are reportedly working to accommodate the request.
NHL・1 DAY AGO

Vegas has Win Streak Halted by Hurricanes in 4-2 loss

The Vegas Golden Knights (9-7-0) had their three-game win streak snapped by the Carolina Hurricanes (12-2-0) in a 3-2 loss on Tuesday night at T-Mobile Arena. Carolina opened the game with a pair of first-period goals off the sticks of Tony DeAngelo and Sebastian Aho. Vegas answered as Brett Howden and Shea Theodore scored goals 1:19 apart to open the second period as the Golden Knights leveled the score at 2-2. Seth Jarvis and Vincent Trocheck scored in the third period to life Carolina to the 4-2 win.
NHL・14 DAYS AGO
San Diego Union-Tribune

Jordan Greenway had a goal and two assists, Kirill Kaprizov scored and Kaapo Kahkonen made 29 saves as the Minnesota Wild beat the Arizona Coyotes 5-2
NHL・15 HOURS AGO
Seattle Times

Among questions facing the Kraken heading into Wednesday night’s showdown against arguably the NHL’s best team was whether they would sustain the effort from a slump-snapping victory a few days before. The answer came four minutes into the second period of this 2-1 win over the Carolina Hurricanes when Jared...
NHL・6 DAYS AGO

EK65, Timo star for Sharks without scoring in win vs. Hurricanes

Editor's note: Sheng Peng will be a regular contributor to NBC Sports California's Sharks coverage for the 2021-22 season. You can read more of his coverage on San Jose Hockey Now, listen to him on the San Jose Hockey Now Podcast, and follow him on Twitter at @Sheng_Peng. Your best...
NHL・8 DAYS AGO
Washington Times

Boston Red Sox owners Fenway Sports Group have made it official: They have reached an agreement to acquire a controlling interest of the NHL’s Pittsburgh Penguins.
NHL・2 DAYS AGO
FanSided

The New York Rangers continued their winning ways, beating a depleted New York Islanders squad 4-1. The game was never really in doubt, mostly due to the efforts of the fourth line. For once, the Rangers fourth line was better than the Islanders vaunted trio. The recipe for victory was...
NHL・6 DAYS AGO

Happy US Thanksgiving, Kraken fans and Rinkrats, we wish you all a safe and happy holiday with your families!. The Carolina Hurricanes made their first visit to Seattle, Wednesday, to face the Kraken. Carolina was on the heels of an overtime loss to the San Jose Sharks two nights before, which ended a four game winning streak. Seattle was coming off a big home win against the Washington Capitals on Sunday night. Taking two out of three games from the Colorado Avalanche, Capitals or Hurricanes should be just what they need to get the train rolling in the right direction.
NHL・6 DAYS AGO
The State

Tage Thompson scored twice, Cody Eakin had a goal and an assist, and the Buffalo Sabres beat the Montreal Canadiens 4-1 on Friday night to snap a four-game skid. Buffalo also got a short-handed goal from Kyle Okposo and won for the third time in 13 games. Victor Olofsson and Jeff Skinner each had two assists. Dustin Tokarski made 25 saves.
NHL・4 DAYS AGO
WKBW-TV

BUFFALO, N.Y. (WKBW) — After an unfortunate tailspin that started with being shut out by Calgary, the Sabres got back into the win column for the first time in over a week. Buffalo defended their home ice with a 4-1 win over the Montreal Canadiens. Tage Thompson picked up another...
NHL・4 DAYS AGO
Syracuse.com

SYRACUSE, N.Y. – After giving up the first goal, the Syracuse Crunch rattled off four unanswered to defeat the Lehigh Valley Phantoms, 4-1, tonight at the Upstate Medical University Arena. The win snaps a six-game skid and advances the Crunch to 6-7-2-1 on the season. Syracuse has also swept the...
NHL・4 DAYS AGO
bigrapidsnews.com

RALEIGH, N.C. (AP) — Dmitry Orlov scored on a power play with 2:55 remaining, and the Washington Capitals recovered after blowing a two-goal lead to beat the Carolina Hurricanes 4-2 on Sunday. Alex Ovechkin and Aliaksei Protas scored 59 seconds apart in the second period for the Capitals, who’ve won...
NHL・2 DAYS AGO
Sacramento Bee

The Montreal Canadiens scored five third-period goals, and the most important one came shortly after Pittsburgh tied the game. Christian Dvorak scored the first of those five, helping the Canadiens end a lengthy road drought by beating the Penguins 6-3 on Saturday night. Evan Rodrigues tied it at 1 with...
NHL・3 DAYS AGO
Sportsnaut

Now that the 2021-22 season is underway, it’s time for some updated NHL power rankings to get a sense of
NHL・1 DAY AGO
Bemidji Pioneer

ST. CLOUD -- The Bemidji High School boys hockey team picked up its first win of the season on Saturday, topping St. Cloud 4-1 on the road. The Lumberjacks rang up four straight goals on the Tech-Apollo co-op, more than enough to clinch the victory. Hunter Brodina did the most...
BEMIDJI, MN・3 DAYS AGO