Dodgers Dominate Against Braves, Force Game 6 Thanks to Chris Taylor 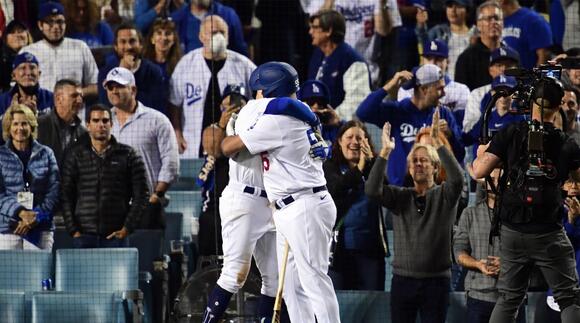 A.J. Pollack and Chris Taylor tallied a multihomer game as the Dodgers beat the Braves, 11-2, in Game 5.

Los Angeles arrived at Dodgers Stadium down 2-0 to the Braves in the National League Championship Series. Now, they're headed back to Atlanta after a commanding 11-2 victory to trail the Braves, 3-2, in the series.

"That's what we needed to do," Chris Taylor said, who tallied three homers and six RBIs . "We needed to make a statement. They put it on us yesterday so we had to respond. It's a good answer for us, and now we go to Atlanta and try to take two."

He is the first player in MLB postseason history to have a three-homer game in a potential elimination competition, which he said was "kind of surreal."

"Mechanically, I'm in a better place," Taylor said about the difference between the regular season and now. "I was kind of grinding there for the last couple months of the regular season, and finally, I worked through some things. And once you get a couple hits, your confidence boosts."

Taylor wasn't the only Dodgers player to score multiple homers on Thursday night. A.J. Pollack hit two of his own, his final coming at the bottom of the eight to lift Los Angeles to a 11-2 lead.

The 2021 MLB offseason is in full swing, and dominoes are already starting to fall. One of the biggest storylines this winter revolves around the stacked group of free-agent shortstops. Some superstars at that position could find themselves playing for new teams in 2022, and Javier Baez is one guy...
MLB・13 DAYS AGO
dodgerblue.com

The Los Angeles Dodgers fell short of their goal of repeating as World Series champions and now face many difficult roster decisions this offseason. Chris Taylor was among the team’s players to reach free agency, which is a group that consists of several key contributors. He earned a first career...
MLB・8 DAYS AGO

Well, Los Angeles Dodgers fans could really blame the division-rival San Diego Padres for this, but the New York Mets really went over the edge. Last offseason, in an effort to ensure the face of their franchise would remain in town for as long as possible, the Pads signed Fernando Tatis Jr. to a 14-year, $340 million contract. Truthfully, we can’t even knock it. Brilliant move. Pay for all of his prime years and then escape the deal before he turns 36 years old.
MLB・2 DAYS AGO
Inside The Dodgers

Dodgers: Corey Seager and Chris Taylor Could be in Play for the Detroit Tigers

Well folks, the 2021 free agent season has begun and is turning out to be one of the deepest shortstop markets in recent memory with Los Angeles contributing two high-impact players, Corey Seager and Chris Taylor, to the pool. The franchise will attempt to retain one, if not both, even though ...
MLB・13 DAYS AGO
FanSided

An MLB Network analyst eyes this former Dodger to replace Andrew McCutchen. When the Philadelphia Phillies declined the $15 million team option for fan-favorite outfielder Andrew McCutchen earlier this month — making him a free-agent — the left field position immediately became one of the biggest areas the organization has to address this offseason.
MLB・13 DAYS AGO
FanSided

The Los Angeles Dodgers had a major depth issue in 2021. There’s not much to debate, either. When Steven Souza Jr. is getting meaningful reps in the NLCS, the problem speaks for itself. On Friday, the Dodgers took the necessary steps by clearing space off their 40-man roster, and two...
MLB・6 DAYS AGO

As we count down the days until the CBA expires on Dec. 1, we've got some action on the MLB rumor front. So now let's have a quick stroll though those sun-dappled meadows of scuttlebutt... Sixth year sticking point with Freeman, Braves. Freddie Freeman, first baseman and warrior-poet of the...
MLB・12 DAYS AGO
FanSided

This is why the Dodgers maybe should’ve extended Chris Taylor during his All-Star, “Glue Guy” first half. Reasons like this. This particular MLB hot stove season seems poised to last longer than ever, as any move that doesn’t get done before the Dec. 1 lockout could get stuck in purgatory until Spring Training.
MLB・11 DAYS AGO
audacy.com

Seven years after signing a $210 million deal with the Washington Nationals in free agency -- which we ranked as one of the greatest deals in MLB history -- Max Scherzer is again a free agent. And even as he prepares for his age-37 season, Scherzer remains among the best...
MLB・24 DAYS AGO
dailydodgers.com

I’ve been a fan of Taylor from afar. Adding him to the mix on the North Side would give the Cubs exactly the type of player they need if they plan on competing for postseason baseball in 2022. Ben Zobrist 2.0. Taylor reportedly will seek a multi-year contract, to no...
MLB・12 DAYS AGO
dodgerblue.com

The Los Angeles Dodgers had Will Smith, Max Muncy, Justin Turner, Corey Seager, Trea Turner, Mookie Betts, Walker Buehler, Max Scherzer, Julio Urias and Kenley Jansen named among the nominees for the 2021 All-MLB Team. This is the third annual recognition for the top players, with winners being announced on...
MLB・18 DAYS AGO
ClutchPoints

Max Scherzer is a free agent for the second time in his career. He’s a three-time Cy Young Award winner and was sensational for both the Washington Nationals and the Los Angeles Dodgers last season. He’s the type of guy who can come in and not only help a team...
MLB・8 DAYS AGO
dailydodgers.com

The Dodgers extended Taylor a qualifying offer, and the All-Star will likely reject it. That doesn't preclude a reunion, but Taylor is going to be highly sought-after. If the Dodgers can't bring him back, then the Dodger outfield is going to look weaker than it has in years.
MLB・14 DAYS AGO
Morgan County Citizen

Single-game tickets for the Atlanta Braves’ 2022 regular season will go on-sale to the general public Friday at noon. The reigning World Series champions will welcome fans back to Truist Park for their home opener April 7 against the Cincinnati Reds. Single-game tickets can be purchased online at www.braves.com/tickets. Early...
MLB・11 DAYS AGO
dailydodgers.com

In addition to the Dodgers and Detroit Tigers, the San Francisco Giants and Texas Rangers are pursuing Taylor as well, David Vassegh said on SportsNet LA: "From what I've been told from sources around baseball, the Texas Rangers and San Francisco Giants are two teams that are definitely in on Chris Taylor. According to Juan Toribio of MLB.com, the Boston Red Sox, Miami Marlins and others are interested in Taylor as well: The utility man is drawing interest from the Red Sox, Cardinals, Rangers, G...
MLB・11 DAYS AGO
dailydodgers.com

Since then, Taylor has performed like the player Lee was supposed to be. Meanwhile, Lee has thrown eight innings in the Majors after the trade. As Lee pitches in his seventh organization, he is not upset about the success Taylor has had, according Bill Shaikin of the L.A. Times: "He's put himself in a great position.
MLB・14 DAYS AGO