3 trades the Denver Broncos must consider to save lost season 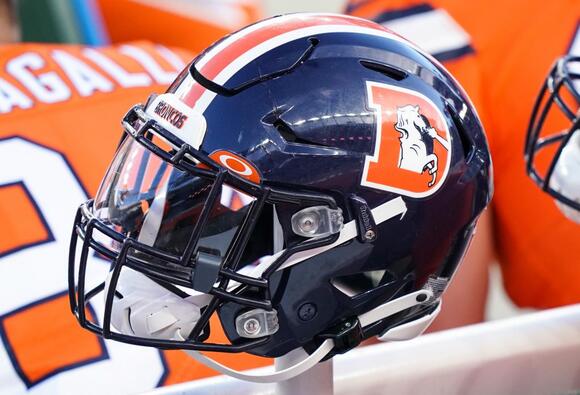 After starting the season with a 3-0 record, the Denver Broncos have now lost four consecutive. That included an ugly 17-14 defeat at the hands of an injury-plagued Cleveland Browns squad Thursday night.

With Teddy Bridgewater under center, Denver’s offense couldn’t get anything going. The team tallied 76 total yards in the first half alone, falling down 10-0 in what seemed to be an insurmountable deficit.

This has been the primary issue for these Denver Broncos. That is to say, an inability to do anything on offense. As far as we’ve seen this season, Bridgewater is as much a part of the problem as he is the answer.

With Vic Fangio’s squad now facing the real possibility of yet another lost season, it’s important for first-year general manager George Paton to make a move or two ahead of the NFL trade deadline to jump start this team. Below, we look at three moves Denver should consider making.

With star wide receiver Jerry Jeudy (ankle) still on injured reserve , there has not been much production behind the combination of Courtland Sutton and Tim Patrick in Denver. In fact, Kendall Hinton entered Thursday’s action No. 3 among Broncos wide receivers with nine catches .

While Jeudy is set to return at some point soon, it makes perfect sense for Denver’s brass to add another quality wide receiver to the mix for whoever is going to be under center. Cooks, 28, would be just that. Even on a bad Texans squad this season , the five-time 1,000-yard receiver has hauled in 40 catches for 481 yards in six games. He could also potentially be had relatively cheap given Houston’s rebuild status.

Denver’s offensive line did a pretty solid job keeping Bridgewater upright in Thursday’s loss to the Browns. Prior to that, the Broncos’ offensive line had struggled protecting its quarterbacks (19 sacks, seventh-highest sack percentage).

More than anything, the Broncos need help along the right side where the combination of Calvin Anderson and Bobby Massie just aren’t cutting it. If Philadelphia does in fact go into full-scale rebuild mode, adding this three-time Pro Bowler to the mix would be a boon for Denver. Not only would Johnson work short-term, he’d end up being long-term fixture next to left tackle Garett Bolles. 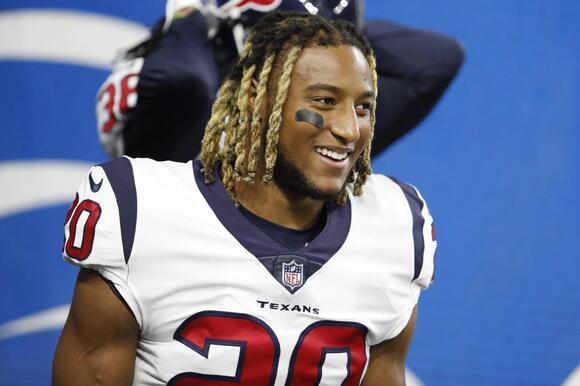 This remains the million-dollar question for Denver’s brass. In fact, that has been the case since Peyton Manning retired following the 2015 season. Enough of the stopgap starters and mediocre quarterbacks. It’s time for Denver to exhaust draft capital in finding a long-term solution.

Is Tua Tagovailoa that guy? We’re not 100% sure. What we do know is that the 23-year-old signal caller offers much more upside than either Bridgewater or Lock. He could also potentially be had should the Miami Dolphins, as expected, land Deshaun Watson in a trade with the Houston Texans.

If you made it to this point that means you didn’t just get mad at a headline and leave a hateful comment on the post – so you deserve a pat on the back. Let’s check out how Baker Mayfield is exciting a Browns civil war. The Cleveland Browns fan...
NFL・5 DAYS AGO
ClutchPoints

Cleveland Browns get disappointing news on the running back front

On Wednesday, Cleveland Browns head coach Kevin Stefanski confirmed that running back Kareem Hunt will not play in Week 11 as they take on the winless Detroit Lions. Yahoo Sports’ Josh Alper reported that Stefanski mentioned Kareem Hunt is making progress in his recovery but is not ready to play this week. This will be the 5th straight game Hunt has missed due to a calf strain.
NFL・10 DAYS AGO
Sportsnaut

The writing is on the wall for Vic Fangio, he’s headed out the door after the 2021 NFL season and
NFL・12 DAYS AGO
The Spun

The fact that the Dallas Cowboys lost to the Denver Broncos on Sunday isn’t really that shocking, but the manner in which they did is pretty stunning. Dallas was crushed by Denver, 30-16, in a game that wasn’t nearly as close as the final score would indicate. The Cowboys got down to the Broncos, 30-0, before scoring some points in garbage time.
NFL・20 DAYS AGO

DENVER — The Broncos came into Sunday ranked sixth in the NFL in rushing defense, allowing only 98.3 yards per game. So, what went wrong against the Eagles, who ran for 214 yards in a 30-13 win over the Broncos Sunday?. "I'll call it a combination of us not executing...
NFL・13 DAYS AGO
Tribune-Star

The Denver Broncos signed quarterback Danny Etling to their practice squad in case the COVID-19 virus further affects their QBs. Backup Drew Lock has been on the reserve/COVID-19 list since contracting the virus last weekend. As close contacts to Lock, starter Teddy Bridgwater and third-stringer Brett Rypien have been taking...
NFL・13 DAYS AGO
USA TODAY Sports Media Group

Eagles at Broncos: 5 things Philadelphia fans should know about Denver

The Birds are in the Mile High City and ahead of the Philadelphia Eagles game against the Denver Broncos in Week 10, we asked Jon Heath of The Broncos Wire five questions about Denver. Can Teddy Bridgewater carve the Eagles up, is Javonte Williams a player to watch and more...
NFL・13 DAYS AGO
ABC 4

DENVER (AP) — Cornerback Darius Slay returned a fumble 82 yards for a touchdown and rookie DeVonta Smith hauled in two touchdown passes from Jalen Hurts in the Philadelphia Eagles’ 30-13 win over the Denver Broncos on Sunday. The Eagles (4-6) won for the fourth time on the road and...
NFL・13 DAYS AGO

Halfway into the sixth season following the Super Bowl run in 2015, I have officially run out of things to say about the Denver Broncos. How many synonyms for putrid, disgusting, offensive, or upsetting are there? I’ve used them all. It’s exhausting getting up early every Monday and trying to come up with some new way to describe the shambles that is Denver football.
NFL・13 DAYS AGO
Sportsnaut

Denver Broncos head coach Vic Fangio said on Monday the team will not bench quarterback Teddy Bridgewater coming back from the bye week. I’m sure that a lot of people not going to agree with Denver Broncos head coach Vic Fangio’s decision to stick with Teddy Bridgewater at quarterback following the team’s bye week. We’re all upset about the lack of wins lately and the apparent lack of effort.
NFL・12 DAYS AGO
rockydailynews.com

ENGLEWOOD, Colo. — COVID-19 is threatening to break the Broncos’ momentum just as it was on the upswing. After six players tested positive for the virus over a 16-day period, the Broncos’ coaching staff got hit Friday morning when offensive coordinator Pat Shurmur tested positive. The Broncos will not expected to have their play-caller for their game Sunday against the Philadelphia Eagles at Empower Field at Mile High.
NFL・15 DAYS AGO

Riding that emotional roller coaster that the Denver Broncos put fans on, fans of the team got to experience another low in Week 10. Coming off their best win in the Vic Fangio era against the Dallas Cowboys, the Broncos welcomed the 3-6 Philadelphia Eagles to Empower Field. The Eagles looked more like a 6-3 team as they beat the Broncos pretty handily, 30-13.
NFL・13 DAYS AGO
milehighsports.com

After a shocking, blowout win last Sunday, the Denver Broncos take on the struggling Philadelphia Eagles this weekend ahead of the bye. The Broncos (5-4) surprised everyone in Week 9 when they dominated the Dallas Cowboys. It was their highest offense score of the season with 30 points. Denver has won back-to-back games while the Eagles are 1-3 in their last four games.
NFL・14 DAYS AGO
FanSided

Denver Broncos: History with Philadelphia Eagles has featured a ton of points scored

The Denver Broncos will welcome the Philadelphia Eagles to Empower Field for a key matchup in Week 10. The Broncos and Eagles will meet for just the 14th time in their storied histories and this will be the final game for the Broncos against the NFC East this season. A win over the Eagles would make it a clean sweep of that division.
NFL・14 DAYS AGO
denverbroncos.com

Denver Broncos vs. Philadelphia Eagles: How to watch, listen and live stream

With the Broncos' bye week awaiting them following Sunday's game, they'll have to keep the same focus that has led them to the brink of earning a second three-game win streak. Behind a season-best rushing performance from Javonte Williams and Melvin Gordon III and a dominant defensive showing, Denver got its best win of the season a week ago against the Cowboys. But if they backslide against the Eagles, the massive win won't mean nearly as much. The play and leadership of veteran quarterback Teddy Bridgewater will be key, as will his growing comfort with a nearly fully healthy receiving corps featuring Courtland Sutton, Jerry Jeudy and Tim Patrick.
NFL・15 DAYS AGO

Why did Von Miller leave the Denver Broncos?

Von Miller made his debut for the LA Rams on Monday Night Football, but why did the Superbowl winner leave the Denver Broncos? What was the reason behind his switch?. Having been at the Denver Broncos since he was drafted into the NFL as the second overall pick in 2011, Von Miller has become a legend at Empower Field.
NFL・11 DAYS AGO
FanSided

Denver Broncos: “A New Hope” on horizon for the team

The future is coming and bringing “A New Hope” to the Denver Broncos and Broncos Country. Better days are ahead with the foundation that’s been built. Von Miller’s trade signaled a sign of the future for the Denver Broncos. Miller has been for the longest time the face of the franchise. Once the trade happened questions arose if the youth would be ready for the bigger stage. Miller’s time of staying with the organization was never a guarantee.
NFL・10 DAYS AGO
milehighsports.com

Hopes were elevated in the Mile High City as the Denver Broncos, coming off of a dominant win against the Dallas Cowboys on the road, were favored against an aimless 3-6 Philadelphia Eagles squad. Those hopes quickly faded and were replaced by groans and shouts of frustration as the Eagles...
NFL・10 DAYS AGO
FanSided

The Denver Broncos trade of Von Miller passed the torch of the “face of the franchise” to another worthy candidate on the roster. Von Miller has been the face of the franchise since Peyton Manning left the Denver Broncos. Now, new general manager George Paton made the courageous decision to trade the organization’s franchise player Miller, doing right by him, to the Los Angeles Rams.
NFL・8 DAYS AGO