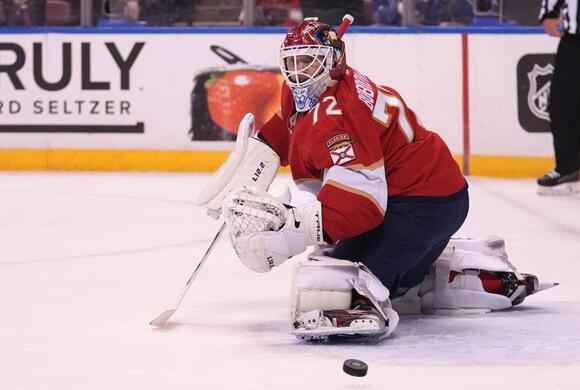 Anton Lundell had a goal and an assist, Sergei Bobrovsky made 30 saves and the Florida Panthers beat the Colorado Avalanche 4-1 on Thursday night in Sunrise, Fla.

Sam Bennett, Sam Reinhart and Carter Verhaeghe also scored goals and Mason Marchment had two assists for Florida, which has started the season with four straight wins for the first time in franchise history.

Mikko Rantanen had a goal and Jonas Johansson stopped 34 shots in his first start of the season for the Avalanche, who have dropped three straight after winning their opener.

Colorado’s top line played together for the first time with captain Gabriel Landeskog’s return from a two-game suspension. He played with Rantanen and Nathan MacKinnon, who had an assist on the Avalanche’s goal. MacKinnon missed the first two games following a positive COVID-19 test.

The Panthers opened the scoring when Marchment beat Colorado defenseman Samuel Girard to a puck to negate an icing, fed Reinhart in front, and he shut the puck past Johansson at 14:32 of the first period. It was Reinhart’s first of the season.

The Avalanche tied it in the final minute of the first when Rantanen, positioned in front of the Florida net, wristed a Girard rebound by Bobrovsky. It was Rantanen’s first of the season.

The game stayed tied until midway through the second period. With Rantanen off for goaltender interference, Bennett floated into the slot and snapped a shot by Johansson to make it 2-1 at 9:04. It was his fourth of the season. 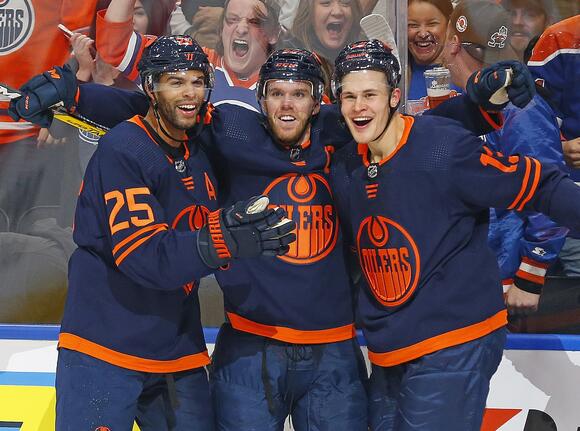 Verhaeghe gave the Panthers a cushion just before the end of the second. With Colorado trying to clear the zone Verhaeghe took the puck from Landeskog along the boards, skated between the circles and sent a low shot by Johansson at 19:13. It was his third of the season.

Johansson came off for an extra skater with 1:52 left in the third period and the Avalanche had a couple of chances, but Lundell sealed it when he scored into an empty net at 18:47. The tally was his second of the season.

Chris Driedger made 33 saves against his former team as the Seattle Kraken snapped the Florida Panthers’ record-tying home winning
NHL・3 DAYS AGO
milehighhockey.com

After another extended break filled with terrible injury updates the Colorado Avalanche headed to the Pacific Northwest in hopes of keeping their recent momentum alive against the hapless Vancouver Canucks. After a quick start the Avalanche took half of the game off before finding enough firepower to get the job done and seal a 4-2 victory.
NHL・13 DAYS AGO
KARE

SUNRISE, Fla. — The Florida Panthers are now the fourth team in NHL history to start a season with 10 consecutive home wins. Frank Vatrano scored twice and Sergei Bobrovsky made 34 saves to help the Panthers remain perfect at home with a 5-4 victory against the Minnesota Wild on Saturday night.
NHL・10 DAYS AGO
Sports Illustrated

The Devils had their three-game winning streak snapped on Saturday when they lost 5-2. They couldn't recover the next day, as the Rangers beat them 4-3 in a shootout on Sunday for their second straight loss. How to Watch Devils at Panthers Today:. Game Date: Nov. 18, 2021. Game Time:...
NHL・12 DAYS AGO

A crack rang through Family Sports Center on Tuesday as Andre Burakovsky’s stick met an untimely end on the bench of the practice facility. “Frustrated, for sure," he said. He was in better spirits before the weekend, scoring a pair of power-play goals as the visiting Colorado Avalanche crushed the...
NHL・11 DAYS AGO
Sportsnaut

Cale Makar had two goals, Nazem Kadri had a goal and three assists, and the Colorado Avalanche rallied to beat
NHL・8 DAYS AGO
Sportsnaut

Now that the 2021-22 season is underway, it’s time for some updated NHL power rankings to get a sense of
NHL・20 HOURS AGO
Sportsnaut

Sam Reinhart scored with 14.4 seconds left as the Florida Panthers capped an incredible rally to defeat the Washington Capitals
NHL・2 HOURS AGO

It was quite the spectacle on Saturday when Ottawa Senators captain Brady Tkachuk had locked horns with Los Angeles Kings forward Brendan Lemieux, with the two tumbling to the ice where they continued to brawl until the referees were able to gain control of the situation. When the tussle was...
NHL・2 DAYS AGO
CBS Boston

BOSTON (CBS) — Bruins winger Brad Marchand was dominant on Sunday night against the Canucks, scoring a game-tying goal and registering a primary assist on the go-ahead goal, both of which came in the third period of Boston’s 3-2 win. This development no doubt irked many Canucks viewers back in Vancouver, as Marchand has never been the most celebrated player in British Columbia, dating back to his and the Bruins’ Stanley Cup win over the Canucks in 2011. Capping off some chaos. Marchy's tying goal on the power play is tonight's @JagermeisterUSA Shot of the Game!@Bmarch63 | #NHLBruins pic.twitter.com/8mpV8cDTtO — Boston Bruins (@NHLBruins) November...
NHL・2 DAYS AGO
markerzone.com

It appears Brendan Lemieux of the LA Kings is facing a lengthy suspension for his decision to bite Brady Tkachuk of the Ottawa Senators Saturday night. The NHL's Department of Player Safety says Lemieux has been offered an in-person hearing (via Zoom) for his actions, something usually reserved for more serious punishments from DoPS.
NHL・3 DAYS AGO

The Department of Player Safety has issued a three-game suspension to Boston Bruins forward Brad Marchand for slew-footing Vancouver Canucks defenseman Oliver Ekman-Larsson last night. As the accompanying video explains:. It is important to note that there are many occasions during the course of a game where players use either...
NHL・1 DAY AGO
San Diego Union-Tribune

On Tuesday night, Pitt fell to the Minnesota Gophers, 54-53, in the ACC/Big Ten Challenge. Pitt’s John Hugley delivered an excellent performance in the loss, snagging a career-high 14 rebounds and scoring 25 points for his third double-double of the year. With the loss, the Panthers fall to 2-5. Hear...
MINNESOTA STATE・13 HOURS AGO
WEEI Sports Radio

Boston Bruins left wing Jake DeBrusk has reportedly requested a trade from the team after being a healthy scratch over the weekend. The Bruins are reportedly working to accommodate the request.
NHL・1 DAY AGO

Brady Tkachuk says he was bite victim of Brendan Lemieux

Ottawa Senators captain Brady Tkachuk was irate after he was sent to the penalty box for his scrum with Brendan Lemieux on Saturday night, and he had no problem sharing why after the game. To say Tkachuk unloaded on Lemieux would be an understatement. Tkachuk and Lemieux got into it...
NHL・2 DAYS AGO
Sportsnaut

This is the 12th time in franchise history that a Washington netminder has spun shutouts in consecutive regular season starts, though not all were achieved in consecutive team games. Samsonov becomes the ninth different goaltender to notch consecutive shutouts; Jim Carey did so three times and Olie Kolzig did it twice.
NHL・9 DAYS AGO
insidehockey.com