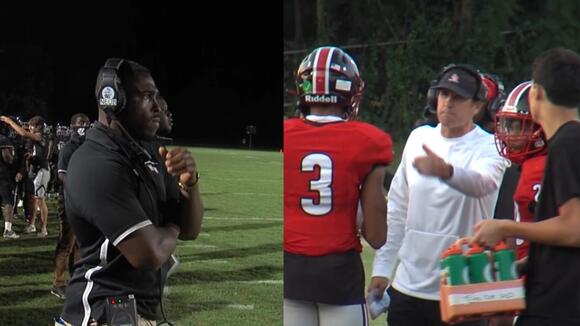 GERMANTOWN, Md. (WDVM) – Something has got to give on Friday night. Northwest and Quince Orchard will both put their 7-0 records to the test against each other in the WDVM Sports Connection game of the week, which has the potential to be the game of the year.

“Every year it’s a big game, it’s circled on their calendar and our calendar,” Quince Orchard football head coach John Kelley said. “It’s one of the reasons you work as hard as you do all summer long, is the opportunity to play in games like this.”

“I feel like everybody knows how good the defense is. And it’s just another challenge on Friday night. They have a good offense, offensive line,” Northwest football head coach Travis Hawkins, who graduated from Quince Orchard, said. “They do a lot of different things on offense that we’ll have to prepare for, but at the end of the day it’s football and I’m gonna have my guys ready to go, and hopefully post another shut out.”

The two teams met in the shortened Spring season, QO won 7-0. In 2019, the Jags stunned QO in the state semifinals. Before that, Northwest hadn’t won the matchup since 2015.

The game time has been moved up from 6:30 p.m. Friday to 4:30 p.m. The schools announced the move Wednesday as a decision with safety in mind. Last Friday, violent fights broke out during the Northwest-Seneca Valley game at Seneca, causing the game to end a quarter early.

“It’s real big I mean like this makes the world,” Quince Orchard senior wide receiver and Syracuse commit Donovan Brown said. “Whoever wins is gonna make the world go crazy, so I expect a lot of people to be there. I think we’re ready. But let’s hope they’re ready.”

The winner of Friday’s game will own an 8-0 record and be in the driver’s seat for home field advantage in the regional playoffs. They’ll also have plenty of bragging rights.

Excitement for a normal season, as high school basketball tips off in Maryland

MARYLAND (WDVM) – December 6th marked the first date of winter sports in the state of Maryland, marking the starting point for the high school basketball season across the state for all public schools from Class 1A to 4A. This will be the first full season schools will have a chance to compete in, since […]
MARYLAND STATE・11 HOURS AGO
WDVM 25

“We’re at the part where we control it.” Washington prepare for final stretch against NFC East teams

ASHBURN, Va. (WDVM) – Following the Washington Football Team’s dramatic comeback against the Las Vegas Raiders to win 17-15, the team’s mental, and emotional focus is as high as ever. And it comes at the right time for the team. Washington, now 6-6 in the season, have five games left. All their games against their […]
NFL・13 HOURS AGO
WDVM 25

Linganore fall short to Northern in 3A final, lose 28-23 despite strong second half

ANNAPOLIS, Md. (WDVM) – In the first half, the Linganore Lancers were forced to claw out of a 21 point hole, trail 28-7 behind Northern senior quarterback, Zach Crounse’s 290-yard, and four touchdown performance in the half. Navy commit Cody Howard led Northern’s offense with10 receptions, 174 yards, and two touchdowns. With seven seconds left […]
ANNAPOLIS, MD・2 DAYS AGO
WDVM 25

KUTZTOWN, Pa. – Shepherd Football was trailing Kutztown 28-24 with seven seconds left on the clock in the NCAA Division II Quarterfinals when Rams junior quarterback Tyson Bagent fired a Hail Mary that was caught in the air and brought down in the endzone by graduate student Alex Wetzel to lift Shepherd over Kutztown 30-28 […]
SHEPHERD, MI・2 DAYS AGO

COLLEGE PARK, Md. (WDVM) – With just a little over 35 seconds left in regulation; fans in the Xfinity Center steadily poured out of the arena, as the Maryland Terrapins lose their first Big Ten matchup of the season to Northwestern, 67-61, in interim Head Coach, Danny Manning’s debut. In his first press conference as […]
MARYLAND STATE・1 DAY AGO
WDVM 25

GAITHERSBURG, Md. (WDVM) – The quince orchard football team’s preseason expectation was to compete for and to win a state championship. On Friday, the Cougars will have an opportunity to win one at Navy Stadium in Annapolis, when they face Wise in the 2021 Maryland 4A football state title game. The Cougars last played in […]
MARYLAND STATE・4 DAYS AGO
WDVM 25

COLLEGE PARK, Md. (WDVM) – Despite committing 16 turnovers, the Maryland Terrapins survive a tough Miami Hurricanes team, winning 84-72 to get back in the win column. “We knew what to expect.” said Head Coach Brenda Frese, “Obviously in the path with these battles against Miami, knew they were going to come in here really […]
MARYLAND STATE・4 DAYS AGO

NORTHERN VIGINIA (WDVM) — Last year’s high school football season was not too long ago, and even though a lot has changed since then, the matchup to decide who goes to the state final is still the same. Madison and South County will once again face off to decide who will go to Old Dominion […]
HIGH SCHOOL・3 DAYS AGO
WDVM 25

WASHINGTON, D.C. (WDVM) — It was another strong defensive performance by the George Washington women’s basketball team, as they forced 17 turnovers, defeating James Madison 54-50. In all five of their wins this year, GW has kept their opponents to 50 points or fewer. Now, the Colonials sit at 5-3 on the season in head […]
WASHINGTON, DC・4 DAYS AGO
WDVM 25

COLLEGE PARK, Md. (WDVM) – Just two days after being drafted to the NBA by the Boston Celtics, Maryland senior Len Bias passed away at 22-years-old of a drug overdose. His death sent shockwaves through the world and his legacy still lives on today. Bias’ parents, James and Lonise Bias, were recognized on the court […]
NBA・4 DAYS AGO