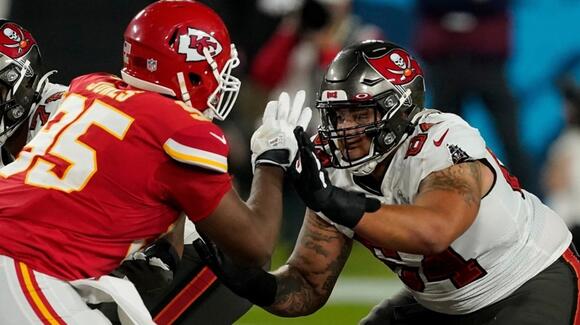 The Bucs waived Seaton with an injury designation ahead of the final roster cutdown to 53 back in late August/early September. Seaton cleared waivers, which allowed him to rejoin the Bucs. Tampa Bay then placed Seaton on injured reserved, where he remained until recently.

Seaton was drafted with the 236th overall pick in the seventh round of the 2017 NFL Draft by the Tennessee Titans. The 27-year-old has had an off-and-on relationship with the Bucs in terms of his employment, but Bruce Arians has publicly praised him multiple times and Seaton would've likely been the Bucs' ninth offensive linemen in 2020 if he didn't decide to opt-out.

"I was really happy to see Brad Seaton back," Arians said during voluntary OTAs back in May. "He opted out last year and he looks fantastic. He looked really good.”

As Auman states in his tweet, Seaton could clear waivers again and sign with any team or the Bucs. If he and the Bucs were to want to rejoin forces, then the team would have to either a) release/waive a player from the 53-man roster in order to place Seaton on the active roster or b) release/waive a player from the 16-man practice squad, because it's currently full, as well.

This all comes after a mandatory waiting period in which the team and Seaton have to reach an injury settlement plus three more weeks after the settlement is reached, per NFL rules.

The Tampa Bay Buccaneers didn’t need star wideout Antonio Brown to crush the Chicago Bears this past week. But they won’t have him at all this Sunday after the latest team decision. On Friday, Buccaneers head coach Bruce Arians announced that Brown is officially out against the New Orleans Saints....
NFL・29 DAYS AGO
bucsreport.com

The Tampa Bay Buccaneers are signing a wide receiver. No not that one, a former Buccaneer, wide receiver Breshad Perriman. Look for Perriman to start on the practice squad but soon be elevated to the 53-man roster. There’s no official corresponding move by the Buccaneers yet, but this all but...
NFL・18 DAYS AGO
CBS Sports

Hall of Famer Scottie Pippen has thrown shade at his longtime Chicago Bulls teammate Michael Jordan, widely considered the greatest basketball player of all time, since the 2020 debut of the Jordan-centric docuseries "The Last Dance." Now, Pippen is directing his criticism toward the player widely known as football's greatest of all time.
NFL・8 DAYS AGO
Sports Illustrated

Check out odds, plays and more for the Tampa Bay Buccaneers vs. Indianapolis Colts NFL Week 12 matchup on November 28, 2021.
NFL・4 DAYS AGO

We were hoping Gronk and Brown would return soon, but that doesn’t look like it’s happening right now. Rob Gronkowski’s injuries from earlier this season seem to be bad enough that the Buccaneers have signed , a tight end, to the practice squad. Fells is a former basketball player-turned football player, at 6’7′ tall.
NFL・17 DAYS AGO
ClutchPoints

The Buccaneers are adding another body to the tight end room in veteran Darren Fells, who was recently released by the Detroit Lions. The news originally surfaced via his agent, Ron Slavin of Sportstars, Inc. and NFL Network's Ian Rapoport exported the development via Twitter. Fells asked the Lions to...
NFL・18 DAYS AGO
ClutchPoints

Rob Gronkowski is well on track to return to the Tampa Bay Buccaneers’ lineup when they play the New York Giants on Monday Night Football. The veteran tight end confirmed as much on Friday as he rejoins the Bucs for practice. Gronk has been dealing with fractured ribs and a...
NFL・8 DAYS AGO

Tom Brady and Julian Edelman made a lot of magic together as teammates on the New England Patriots. So, it’s no surprise Brady tried to get Edelman on board to join the Tampa Bay Buccaneers once he made his decision to leave the Patriots for the Florida-based squad. The former...
NFL・5 DAYS AGO
AllBucs

The Tampa Bay Buccaneers are vying to get healthy during their Week 9 bye, opening the practice window for two players on the injured reserve on Tuesday and continuing to monitor the statuses of fellow injured contributors. On Thursday, Bucs head coach Bruce Arians shared on the Bucs All-Access Podcast...
NFL・23 DAYS AGO
ESPN

Coach Bruce Arians on Tampa Bay Buccaneers' mistakes in loss: 'The stupidity has to go away'

LANDOVER, Md. -- Moments after the Tampa Bay Buccaneers fell to the Washington Football Team 29-19 on the road Sunday, coach Bruce Arians said his team -- now 6-3 after two straight losses -- has some "soul-searching to do," and he chided it for penalties and mental errors that continue to be costly.
NFL・13 DAYS AGO
AllBucs

It's Week 9 and the Tampa Bay Buccaneers are in the midst of the playoff hunt. The last thing any Bucs fan is looking forward to right now is the 2022 NFL Draft. However, it's Tampa Bay's bye week and content is limited as such. So strap in your seatbelts: We're going on a ride into the upcoming offseason with our first Buccaneers mock draft of the year!
NFL・24 DAYS AGO
AllBucs

How Concerned Should the Buccaneers Be About Rob Gronkowski's Status?

Two weeks into the 2021 season, Tampa Bay Buccaneers' tight end Rob Gronkowski looked like the old, prime version of himself. Having caught four touchdown passes in half the number of games, Gronkowski played a massive part in the Bucs scoring 79 points in two contests. And just like that,...
NFL・24 DAYS AGO
AllBucs

By now, it's probably safe to assume that most have heard about Aaron Rodgers and his situation involving the COVID-19 virus/disease. Rodgers missed the Packers' Week 9 matchup with the Kansas City Chiefs, but is expected to return for the Week 10 matchup with the Seattle Seahawks. Buccaneers quarterback Tom...
NFL・18 DAYS AGO
AllBucs

Sadly enough, the first half of the 2021 season is over and done with. The last nine weeks have flown by and have showcased plenty of surprises, as expected. Sports Illustrated surprised the Buccaneers Tuesday by ranking them as the No. 1 team through the first half of the season. SI's collection of staff writers put all of their 2021 votes together in order to assemble this week's list.
NFL・19 DAYS AGO
AllBucs

This is one is obvious. The Bucs roster is riddled with good players that mean a ton to the team's success, but as we all know, everything centers around Brady and what he does with the ball in his hands. Brady leads the NFL in passing yardage, completions, attempts, and...
NFL・24 DAYS AGO
Popculture

The New York Giants have fired a coach after their 30-10 loss to Tom Brady and the Tampa Bay Buccaneers Monday Night. On Tuesday, the team announced they had fired offensive coordinator Jason Garrett after less than two years on the job. The Giants offense has struggled this year, averaging 18.9 points per game this season, ranking 25th in the NFL. Last year, the offense ranked 31st in the league, averaging 17.5 points per game.
NFL・4 DAYS AGO
AllBucs

Buccaneers Expect Richard Sherman to be 'Ready to Roll' vs. WFT

With a bye week to heal up in the rearview mirror, the Tampa Bay Buccaneers are anticipating a much healthier secondary in the near future if not this Sunday against the Washington Football Team. In addition to nickel corner Sean Murphy-Bunting's 21-day practice window being opened while on injured reserve,...
NFL・18 DAYS AGO
AllBucs

Tampa Bay head coach Bruce Arians shared on Wednesday that wide receiver Chris Godwin did not practice to begin the week as he is dealing with a foot injury, according to Greg Auman of The Athletic. The Buccaneers plan to "wait and see" regarding Godwin's status for Sunday's game against...
NFL・17 DAYS AGO
AllBucs

It is Week 10 of the 2021 NFL season, which means the Tampa Bay Buccaneers (6-2) are headed up to Maryland to take on the Washington Football Team (2-6). Both teams are coming off their Bye Week and while both teams have drastically different records, both had plenty of things to work on and areas to improve in over the previous seven days.
NFL・14 DAYS AGO