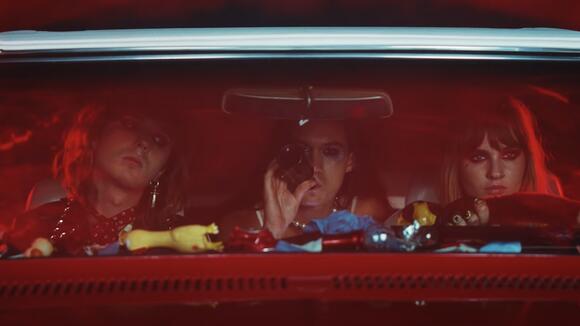 Måneskin 's video for their latest single "MAMMAMIA" is coming out at a fitting time, just ahead of Halloween. The clip sees bassist Victoria de Angelis, guitarist Thomas Raggi and drummer Ethan Torchio fantasizing about killing singer Damiano David after de Angelis exclaims "He's so f***ing annoying!" while in the car with her bandmates.

The song was written after the Italian rockers won Eurovision, and they only had a few days in the studio to work on new music.

"We didn't take it too seriously," de Angeles said of the song upon its release. "It's a very silly, careless song and we've never done something like that before. It came together very naturally. We just tried to have fun and enjoy it, because [it was written] in a moment where we were experiencing a lot of things."

"After Eurovision we had a lot of attention on us. A lot of the time, we did something that we thought was great but people criticized it," David added. "I wanted to translate that into lyrics, because it happens a lot – maybe you’re doing something that you feel is great, but people don’t understand it and make bad judgements and bad comments about it. I wanted to make fun of that situation."

Watch the gory video above.

Måneskin is set to perform at the iHeartRadio ALTer EGO presented by Capital One , joining Coldplay , twenty one pilots , Imagine Dragons , Kings of Leon , Willow and All Time Low at the Forum in Los Angeles on January 15th, 2022. Fans can tune in to watch this year's iHeartRadio ALTer EGO via an exclusive livestream on LiveOne on livexlive.com . Over 75 Alternative and Rock iHeartRadio stations will also broadcast the event live in their local markets and on the iHeartRadio app.

The three-part documentary comes out November 25 on Disney+.
MOVIES・3 DAYS AGO
People

Freddie Mercury Under Pressure: Inside the Dying Queen Frontman's Quest to Live Forever Through Song

Freddie Mercury once asked, "What is this thing that builds our dreams, yet slips away from us?" And as the Queen frontman approached his final days, he felt those words more acutely than ever. Mercury died on Nov. 24, 1991, after an intensely (and intentionally) private struggle with AIDS. In...
MUSIC・3 DAYS AGO
TMZ.com

BTS is at the intersection of global fandom these days -- but right now, they're literally at the intersection of Genesee and Beverly in Los Angeles -- with none other than James Corden. The Korean pop band -- consisting of a whopping 7 members -- appears to be involved in...
LOS ANGELES, CA・4 DAYS AGO
loudersound.com

Big Big Train frontman and multi-instrumentalist David Longdon has died, the band have confirmed. In a statement, they say, "Big Big Train are extremely saddened to announce the death of David Longdon this afternoon in hospital in Nottingham, UK at the age of 56 following an accident in the early hours of Friday morning. He is survived by his two daughters Amelia and Eloise, his mother Vera and his partner Sarah Ewing.
MUSIC・7 DAYS AGO

Ariana Grande sobs on 'The Voice' during high-stakes elimination

Tuesday night's episode of "The Voice" got a little too real for coach Ariana Grande when she watched fellow team members Sasha and Jim Allen be put up for elimination against Team Kelly Clarkson's performer Gymani. “This is too much right now, I feel insane,” she told her teammates as...
CELEBRITIES・3 DAYS AGO
TVShowsAce

The Bachelorette star Blake Moynes seems to find something that brings him happiness. Keep reading to find out about this and more. In The Wake Of A Messy Break Up, Blake Admits To A Bad Habit. Blake Moynes has been the topic of headlines for a few weeks since he...
CELEBRITIES・2 DAYS AGO
POPSUGAR

Watch Maneskin's Glitzy Performance of "Mammamia" at the MTV EMAs 2021

Everyone's new favorite rock band, Måneskin, performed at the MTV Europe Music Awards 2021, held live in Budapest, Hungary, after the ceremony went virtual last year due to the coronavirus pandemic. The band took home the award for best rock after being nominated for that and for best group, and it was seriously well-deserved.
MUSIC・13 DAYS AGO
x1065.com

Måneskin is releasing a new vinyl single featuring their latest song, "MAMMAMIA." The disc is due out this Friday, November 19, and also features a previously unreleased track called "Touch Me," which the Italian rockers say they "can’t wait for you to hear." "MAMMAMIA" premiered this past October. It followed...
MUSIC・12 DAYS AGO

Earlier this month, Mastodon's Brent Hinds cited opening for Disturbed in 2008 as one of his least favorite tours, describing the experience with a homophobic slur. During a new chat with Loudwire Nights host Toni Gonzalez, Disturbed frontman David Draiman offered his reaction to Hinds' comments. "You know, I have...
MUSIC・11 DAYS AGO
NewsTimes

Ahead of the release of David Bowie’s long-shelved 2001 LP Toy, Parlophone/ISO Records have shared the album’s unreleased version of “Can’t Help Thinking About Me.”. Like many of the Toy tracks — including the earlier single “Karma Man” — Bowie initially recorded “Can’t Help Thinking About Me” during his pre-Space Oddity era, only to revisit the song in the late-Nineties. The song was originally released as a single in 1966 and all but forgotten by the singer until he surprisingly revived it for his VH1 Storytellers special in August 1999.
MUSIC・8 DAYS AGO
94.5 KATS

We’re at that late point in autumn when it’s basically gray enough and cold enough to feel like winter’s opening act, so there’s no better time than now for Ypsilanti-based a cappella singer/songwriter Ki5 to bring us an effervescently buoyant ballad with a melodic motif that evokes a sense of transcendence and provides a surge of endorphins.
YPSILANTI, MI・6 DAYS AGO
iHeartRadio

Rihanna Joins The Billionaire Club Again, This Time For Music

Mike Shinoda Details New Album, And It's Unlike Anything Released Before

'ZIGGURATS' will be released as an NFT and on streaming services.
MUSIC・4 DAYS AGO
iHeartRadio