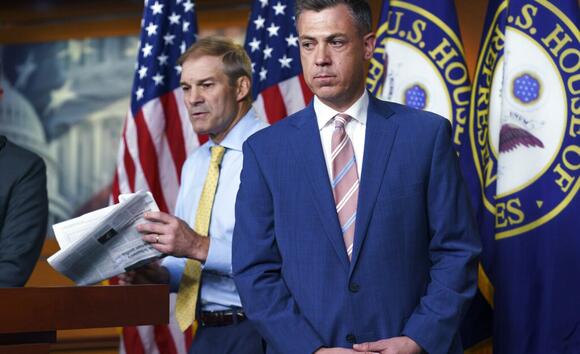 The revelation came as the House debated whether to hold Steve Bannon, a former adviser to former President Donald Trump, in criminal contempt of Congress for ignoring a subpoena from the select committee. As vice chairwoman of the panel, Cheney managed debate for those arguing in favor of doing so, and Banks, who is not on the committee, managed debate for those arguing against.

After Banks’s opening statement, Cheney responded with a surprise.

“I would like to introduce into the record a number of letters to federal agencies dated Sept. 16, 2021, for example, signing his name as the ranking member of the committee he's just informed the House he's not on,” Cheney said.

One of the letters Cheney entered into the record, shared with the Washington Examiner, showed that Banks explained that he was not on the committee but identified himself as “ranking member” under his signature.

In a letter to Secretary of the Interior Deb Haaland, Banks said that House Minority Leader Kevin McCarthy had originally appointed him a ranking member of the House select committee.

But rules of the committee allowed House Speaker Nancy Pelosi to veto any minority party picks, and she blocked Banks and Ohio Rep. Jim Jordan from being appointed. That prompted McCarthy to pull his other three picks from the committee.

"It was a shameful and divisive decision with real consequences. Today, because of that decision, there is no committee conducting a legitimate investigation into Jan. 6,” Banks said during his opening statement on the House floor on Thursday.

Cheney and Adam Kinzinger of Illinois are the only two Republicans to sit on the Jan. 6 select committee, having both been appointed by Pelosi, and have been largely shunned by the rest of the Republican conference.

McCarthy pledged at the time that Republicans would “run [their] own investigation” into Jan. 6. The letter from Banks, and requesting information that the committee received, could be a part of that effort.

“Pursuant to the rules of the House of Representatives, the minority party in Congress retains rights to the same information that is provided to the majority party. For those reasons, I ask that you provide me any information that is submitted to the Select Committee. Additionally, please include me on any update or briefing that you provide,” the letter from Banks to Haaland said.

Banks’s office responded to Cheney revealing the letter by suggesting that it is intended as a distraction.

“The letter clearly states that Rep. Banks was refused the opportunity to fulfill his duties as Ranking Member. This is a bizarre Democrat narrative meant to distract from the actual contents of Rep. Banks’ letter and to avoid talking about the actual activities of the Select Committee, which are partisan, authoritarian and indefensible,” a spokesperson for Banks said in a statement to the Washington Examiner .

“To reiterate, the letter requests the minority party receive access to information shared with the Select Committee. The question every member of the media should be asking: if this is a legitimate ‘above board’ investigation, then why is it being conducted in secret? Why do Liz Cheney and House Democrats think they’re the only ones who deserve to receive information from the executive branch?”

“He’s not a member of the committee. That’s straightforward fact,” Raskin told the Hill press pool.

Why would any body vote against an investigation, that would allow the American to know what happened on Jan six in DC, at the Capitol.Maybe Trump can tell us what is his objections to this investigation

Cheney is already miles ahead of Trump and his unusful idiot's. They are working on their master plan to sabotage at the Polls. Meanwhile they barely bother with any Candidate but Trump. The secret sauce Democrats have is their 2020 victory. No matter how much they're planning to cheat, it will be seeb coming. Trump lost because Voters had enough. The mid terms will show us howbad for Trump it will be.

Rep. Dan Crenshaw slams members of Freedom Caucus as 'grifters in our midst'

Texas Rep. Dan Crenshaw slammed members of his own party during an event over the weekend, calling members of the Republican Freedom Caucus "grifters in our midst" and "performance artists."
CONGRESS & COURTS・11 HOURS AGO
WashingtonExaminer

Mark Meadows is withdrawing his voluntary cooperation with the Jan. 6 select committee after he and his lawyer would not accommodate some of its requests.
CONGRESS & COURTS・11 HOURS AGO
The Guardian

BREAKING — A federal judge today set a July 18 date for STEVE BANNON’s trial for contempt of Congress, Kyle Cheney reports. The date essentially splits the difference between the Justice Department’s request for April 15 and Bannon’s ask for Oct. 22. — What this means for the Jan. 6...
U.S. POLITICS・12 HOURS AGO
explorebigsky.com

Remember the line from Francis Ford Coppola’s “Apocalypse Now,” in which the elusive character Colonel Kurtz, played by Marlon Brando, repeats a passage from Joseph Conrad’s “Heart of Darkness” about the shadow of humanity? “The horror,” Kurtz utters as he’s about to be assassinated, “the horror …”. In Wyoming, there’s...
POLITICS・1 DAY AGO
WashingtonExaminer

A top Trump aide gave "real-time communications" during the Jan. 6 riot at the U.S. Capitol to House investigators.
CONGRESS & COURTS・2 HOURS AGO
Newsweek

Mark Meadows Walks Back on Deposition Agreement With Jan. 6 Committee

This latest development comes just a week after the House panel had announced the former White House chief of staff's cooperation.
CONGRESS & COURTS・15 HOURS AGO

He Voted to Impeach. Can He Survive in the GOP?

Late at night on the second Tuesday of January, Peter Meijer, a 33-year-old freshman congressman from West Michigan, paced the half-unpacked rooms of his new rental apartment in Washington, D.C., dreading the decision he would soon have to make. Six days earlier, Meijer had pulled a smoke hood over his...
CONGRESS & COURTS・20 HOURS AGO
POLITICO

Lawmakers say if the former White House chief of staff does not appear for a scheduled deposition Wednesday, they'll vote to hold him in contempt of Congress.
CONGRESS & COURTS・9 HOURS AGO
WGNO

The House on Thursday voted to pass a short-term spending bill to fund the government through mid-February, as lawmakers work quickly to avert a shutdown on Friday.
CONGRESS & COURTS・1 DAY AGO
WashingtonExaminer

Wyoming Rep. Liz Cheney said that it was House Minority Leader Kevin McCarthy’s own fault that the House select committee formed to investigate the Jan. 6 attack on the Capitol had no Republican members appointed by him.
CONGRESS & COURTS・5 DAYS AGO

The House Jan. 6 Committee sent subpoenas to phone companies for the records of private individuals, Rep. Jim Banks told Fox News Thursday, as the controversial panel plows ahead with its investigation into the attack on the Capitol earlier this year. The subpoenas follow preservation orders the committee issued to...
CONGRESS & COURTS・5 DAYS AGO
POLITICO

The attorney, who helped former President Donald Trump contest the 2020 election, asserted his right against self-incrimination in a Dec. 1 letter to the Capitol riot panel.
WASHINGTON, DC・4 DAYS AGO
AOL Corp

WASHINGTON — Congress will hold weeks of public hearings to explain and highlight what happened on Jan. 6 and in the days leading up to the violent assault on democracy, and what then-President Donald Trump’s role in it was, the vice chair of the Jan. 6 House select committee said on Thursday.
CONGRESS & COURTS・5 DAYS AGO
POLITICO

Liz Cheney says the Jan. 6 panel will take a deposition from Mark Meadows "next week."

It's unclear how cooperative Meadows will be when he goes under oath. Deposition time: Former White House chief of staff Mark Meadows will come in for a deposition with the select panel investigating the Jan. 6 insurrection “next week,” its vice chair, Rep. Liz Cheney (R-Wyo.), said in a brief interview with POLITICO.
CONGRESS & COURTS・7 DAYS AGO

Indiana Rep. Jim Banks, the Republican who House Minority Leader Kevin McCarthy originally chose to be the ranking member on the Jan. 6 Select Committee, is accusing Democrats of "intentionally misleading witnesses" about the partisan motivations of those questioning them. The committee has told witnesses that Republican or bipartisan staff...
CONGRESS & COURTS・7 DAYS AGO
WashingtonExaminer

Mark Meadows shifts to cooperate with Jan. 6 inquiry and will appear before committee

Mark Meadows has provided records to the House select committee investigating the Jan. 6 riot at the U.S. Capitol after weeks of resisting cooperation with the panel, shielding him from the committee holding him in contempt of Congress for the time being.
CONGRESS & COURTS・7 DAYS AGO
PennLive.com

It’s rare that we get to see displays of political courage and political cowardice play out openly and at the same time. No matter what you think of her politics, Wyoming Representative Liz Cheney deserves respect and thanks for standing tall against the lies and bullying of former president Donald Trump and the current Republican leadership. Who would have thought that speaking truth versus lies would be considered an example of political courage?
U.S. POLITICS・8 DAYS AGO
TheAtlantaVoice

Georgia Rep. Marjorie Taylor Greene, one of Donald Trump’s staunchest allies in Congress, on Thursday laid out demands for a GOP leader to earn her vote for House Speaker if Republicans are able to retake the majority after the 2022 elections and cast doubt on House Minority Leader Kevin McCarthy being elected to the position. “We know that Kevin McCarthy […]
CONGRESS & COURTS・11 DAYS AGO