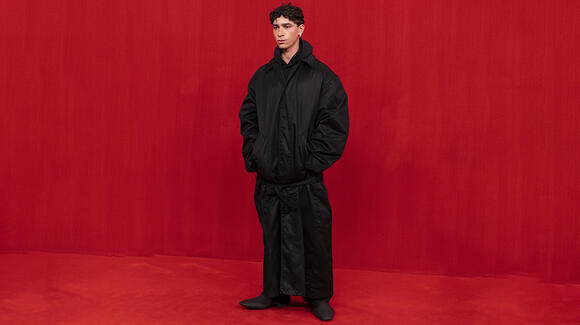 The world officially has a new number one luxury brand.

On Wednesday, the Lyst Index Q3 report for 2021 revealed that Balenciaga is currently the world’s hottest clothing company. The Parisian label secured the top spot after a string of high-profile news stories that kept it at the top of the luxury world’s headlines The first was the label’s return to producing couture in July, its first collection in 53 years. Shortly thereafter, the brand announced it would collaborate with Kanye West on merch for the August release of his new album Donda . In September, Kim Kardashian turned heads at the Met Gala when she donned a polarizing, all-black look on the red carpet.

But Demna Gvasalia, Balenciaga’s creative director, didn’t stop there. Last month, the brand took a dive into the metaverse and released digital items from accessories to clothing for Fortnite players . At Paris Fashion Week, the brand aired a special episode of The Simpsons during its fashion show, dressing the cast of the much-beloved show in cartoon versions of the runway collection.

Gucci previously occupied the top spot on the list, but now comes in at a close second. Still, it’s no cause for alarm: the Florentine house reportedly saw an 86 percent revenue increase from Q2 and a spike in press thanks to the release of the trailer for House of Gucci , starring Lady Gaga and Adam Driver. Dior came in third place, following the opening of its new Christian Dior: Designer of Dreams exhibit at the Brooklyn Museum. Meanwhile, Prada and Louis Vuitton claimed the fourth and fifth spots on the list respectively.

The Lyst Index ranks fashion’s top brand and products quarterly, each year. The global shopping platform claims that over 150 million people use it to browse and buy items from up to 17,000 brands and stores every year. According to the retailer, the formula behind the Lyst Index uses shoppers’ behavior, which includes conversion rates and sales, to come up with the ranking. The platform also includes Google search data, as well as social media mentions and engagement statistics over a three-month period.

To view the rest of the list from Q3, visit Lyst.com .

Amidst the onslaught of sports watches—including a very much talked about limited-edition blue-dialed one—you may find yourself a little lost when searching for something more festive for yourself or a loved one. Leave it to Harry Winston to deliver this colorful, diamond-studded jewelry watch for those looking to dazzle during the holidays. The Premier Sunflower Automatic not only adds the requisite decorative touch with a slew of diamonds but also works on a symbolic level: The sunflower is said to represent gratitude, which makes it perfect for the season. The combination of precious gems—4.66 carats of diamonds and a quarter-carat of...
DESIGNERS & COLLECTIONS・5 HOURS AGO
Robb Report

Still looking for a special holiday gift? Phillips might have just what the doctor ordered. On Monday night at 5 p.m. EST, the auction house will hold its December Jewels live auction in its new headquarters at New York’s 432 Park Avenue. There will be 120 lots in total with pieces from JAR, Bulgari, Chopard, Cartier and other big names. We perused through the jewelry in person recently and can say, without a doubt, the highlight will be the pair of 18-karat rose gold cuffs with 101.50-carats of colored diamonds by American-born, Parisian-based jeweler, Joel Arthur Rosenthal, known as JAR. Whoever takes...
DESIGNERS & COLLECTIONS・2 DAYS AGO
Robb Report

Gucci and The North Face are back together once again for an unexpected second drop of their hype-worthy collaboration. Much like the archival ‘70s designs from the first drop, chapter two of the collection by the Alessandro Michele-led Italian fashion house and the outerwear giant continues to have a significant outdoor influence, but this time with a ‘90s edge. The extensive 130-piece, cross-category collection for men and women comprises of ready-to-wear, soft accessories, luggage, and shoes, including many pieces like hiking boots, multi-pocketed backpacks, and insulated jackets that reinforce its outdoor purpose. Bright colors and several floral prints created in partnership with The...
DESIGNERS & COLLECTIONS・4 DAYS AGO
101.1. The Wiz

Beyonce delivered all the sparkle we need for the season in a Gucci x Balenciaga FW21 RTW blazer and matching Gucci boot-leggings from Gucci's and Balenciaga's "Hacker Project".
DESIGNERS & COLLECTIONS・4 HOURS AGO

Burberry’s iconic trench coat with vintage check in cotton gabardine can set customers back over £1600. Now, fans of the British luxury brand can rent one for £170 a week, or buy secondhand for £750, through Burberry’s new partnership with My Wardrobe HQ. Launching today,...
DESIGNERS & COLLECTIONS・3 HOURS AGO
iHeartRadio

FN rounds up all the store openings, closings and redesigns happening this month, from throughout the footwear industry. Send your retail news to web@footwearnews.com. Dec. 8, 2021: Brunello Cucinelli unveiled a new look at its Madison Avenue flagship store in New York City. With a new expanded footprint of 8,127 square feet, the store, located at 683-689 Madison Avenue, is more than double the size of the original flagship. Constructed began in February, working in phases so that the store could remain open throughout the process. The store features men’s, women’s, children’s and lifestyle collections while the expansion now offers eight windows...
NEW YORK CITY, NY・2 HOURS AGO

H&M Is All Smiles in New Streetwear Collaboration

With its new collection, H&M aims to put a smile on consumers’ faces. The fast-fashion brand recently released a streetwear-inspired collection in collaboration with The Smiley, a nostalgic symbol of positivity. Spanning tie-dye hoodies, puffer coats and joggers, T-shirts, rugby shirts and chunky jewelry, the collection melds modern silhouettes with the retro character. Recycled cotton blends are used throughout the collection, including for two jeans styles—a men’s relaxed jean and a women’s loose-high jean embellished with all-over Smiley laser prints. The collection retails for $4.99-$49.99 and is available now. With its ’70s roots, the property is a popular motif for patchwork, embroideries and...
DESIGNERS & COLLECTIONS・4 HOURS AGO
USA TODAY

Ralph Lauren's next venture is a metaverse holiday experience for Roblox

Kim Kardashian thanked her ex-husband Kanye West for "introducing" her to the fashion world.
BEAUTY & FASHION・2 HOURS AGO
Footwear News

Tracee Ellis Ross brought a dark edge to the red carpet in head-to-toe Balenciaga at the 2021 People’s Choice Awards at the Barker Hangar in Santa Monica, California. The “Black-ish” star hit the carpet in a long black jumpsuit with a deep V-shaped neckline with Kim Kardashian, following her presentation of this year’s Fashion Icon Award to Kardashian. The piece included cargo pant pockets, as well as a black zipper accent on its front. Ross paired the look with large crystal statement earrings and a bow-shaped crystal statement necklace, adding supersized glamour to her ensemble—and coordinating smoothly with Kardashian, who also...
SANTA MONICA, CA・17 HOURS AGO

Prepare the runway, because Tracee Ells Ross is bringing her fashion A game in one of her fiercest looks yet. The Black-ish actress, 49, recently gave fans a glimpse of her stunning ensemble on Instagram by sharing a series of pics and behind-the-scenes videos from this year's People's Choice Awards. The post features elegant shots of Ross posing in a gorgeous black jumpsuit with matching patent leather boots—complete with a glass of wine in hand. In the caption, she wrote, "BALENCIAGA LOVER(s) ~ head to toe #pcas."
DESIGNERS & COLLECTIONS・6 HOURS AGO
BIN: Black Information Network

Tyler The Creator Breaks Down During Eulogy At Virgil Abloh's Memorial

While art, at its core, is a way for artists to express their creativity and imagination, it's not a secret that it can also be a very lucrative investment. Of course, that is, if you know what artists to invest in. According to a report by the UK-based price comparison website money.co.uk, Picasso is the artist whose works currently have the most value at auctions.
VISUAL ART・1 DAY AGO
POPSUGAR

With Spider-Man: No Way Home premiering on Dec. 17, it's just the start of Zendaya's inspired press tour looks for the third film of the franchise, dreamed up and brought to fruition with the help of Image Architect Law Roach. The duo worked with the Roberto Cavalli team to repurpose a gold spine-like gown from the 2000s archives for an appearance in Paris, and now they've selected a spring/summer 2022 Alexander McQueen look straight off the runway for a photo call at The Old Sessions House in London.
BEAUTY & FASHION・2 DAYS AGO
Robb Report

Travel junkies are a tricky group to buy gifts for: Not only have they been there, done that, but they’ve also likely picked up some pretty unique things along the way. So this year, for our list of the best gifts for travelers, we’re spotlighting products that might spark wanderlust and inspiration (think gorgeous books celebrating global destinations), as well as useful items that help enhance journeys, from stylish pet carriers and portable UV disinfecting wands to the perfect tool for aerating wine while on the road. Because these days, anything that can help ease the stress and hassle of...
BEAUTY & FASHION・5 DAYS AGO
RNB Cincy 100.3

Teyana Taylor, Her Abs & Family Are The New Faces Of Skims ‘Cozy’ Collection

Teyana Taylor's abs and her adorable family are the stars of the new Skims Collection, dropping on December 7.
DESIGNERS & COLLECTIONS・5 DAYS AGO
Teen Vogue

On November 28 news broke of cutting-edge designer Virgil Abloh's death from cancer at 41, just days before he was set to present his Spring/Summer 2022 collection for Louis Vuitton at an uptempo Miami-based show. Vuitton and Bernard Arnault, CEO of LVMH, decided to still present the collection as planned, presenting it under the title “Virgil was here.”
BEAUTY & FASHION・6 DAYS AGO