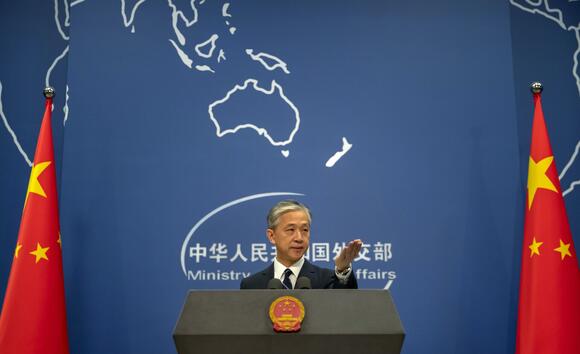 European Union legislators voted overwhelmingly in favor of trade talks with Taiwan and other measures flouting China’s claims to sovereignty over the island, leaving officials in Beijing fuming at the display of tension between Western democracies and the communist regime.

“It is vile in nature and has an egregious impact,” Chinese Foreign Ministry spokesman Wang Wenbin said Thursday. “A word for the relevant side: Do not underestimate the Chinese people's determination, will, and capacity to defend national sovereignty and territorial integrity.”

China’s relationship with the European Parliament has soured in recent months, as European condemnation of China’s atrocities against Uyghur Muslims resulted in a trans-Atlantic move to impose sanctions on EU and British lawmakers. China hawks in the European Parliament countered by freezing a major EU-China investment deal, a rebuke compounded Thursday with the endorsement of trade talks and a proposal to rebound the “European Economic and Trade Office in Taiwan” as the “European Union in Taiwan” — a loaded name change, given China’s hostility to any sign of political engagement between Taiwan and other governments.

“If the European Union would make such a step, it would be a really big deal, but I doubt it would be possible,” a Baltic official told the Washington Examiner after the vote. The official added, "It reflects the thinking of many European politicians, so that’s a very serious signal.”

China has turned trade relationships to geopolitical advantage in a number of ways, not least of which has been to impede transatlantic unity on issues that U.S. leaders and Western intelligence official regard as security threats from Beijing. Chinese officials have sustained some setbacks in recent years, even before their censorship of early pandemic warnings provoked global outrage, which has enhanced the European desire for good relations with Taiwan.

That interest was reflected in the proposal to abandon the “economic and trade” terms in the current office’s name.

Wang, the Chinese foreign ministry official, implied that deference to Beijing’s claims of sovereignty over the island, a democratic society that the Chinese Communist regime has never ruled, is “the political foundation of China-EU relations.”

Every time one of these Red Chinese official mouths off, every country should raise tariffs on Red Chinese products by 10%

BlaBlaBla the Chinese threaten everyone that stands up against them. The Europeans have some courage and I commend them for doing the right thing

Every country in the world needs to shut out China and make them pay dearly for there release of covid on the world.

Chinese officials downgraded their relations with Lithuania and threatened further diplomatic and economic punishments in a dispute over the Baltic state’s relations with Taiwan that could shape trans-Atlantic attitudes toward Beijing.
FOREIGN POLICY・7 DAYS AGO
WashingtonExaminer

Dan Bongino infected with painful breakthrough case of COVID-19: 'One of the worst things I ever experienced'

Conservative radio host Dan Bongino said during his Monday show that he caught a "painful case" of COVID-19 last week, despite having been vaccinated.
PUBLIC HEALTH・18 HOURS AGO
WashingtonExaminer

The yearlong frenzy of gun buying went into overdrive last week, guaranteeing that 2021 will be the second-best year for sales after last year’s record binge.
PUBLIC SAFETY・23 HOURS AGO
The Guardian

US Congressmen, in Taiwan, pledge support in struggle against China

US lawmakers have made a surprise visit to Taiwan, to show support amidst Chinese threats to take control of the island nation. The American members of the House of Representatives, four Democrats and one Republican, met with Taiwanese President Tsai Ing-wen. Michigan Democrat Rep. Elissa Slotkin reported that when news...
FOREIGN POLICY・22 HOURS AGO
realcleardefense.com

The Drums of War in Taiwan and Ukraine

The vastness of Eurasia is becoming bracketed by belligerence. On the western front, Russia has deployed a growing number of military units to the regions near its border with Ukraine, inviting a flurry of speculation about its motives. And in the east, China’s behavior vis-à-vis Taiwan has grown increasingly worrisome. A widely reported war-game study by a US think tank concludes that the United States would have “few credible options” were China to launch a sustained attack against the island.
FOREIGN POLICY・1 DAY AGO
Newsweek

BRUSSELS -- The European Union said Tuesday that it wants China to release "verifiable proof" that tennis player Peng Shuai is safe and to conduct a thorough and transparent investigation into her sexual assault allegations. Peng, a three-time Olympian and former top-ranked doubles player, dropped out of public view after...
TENNIS・6 HOURS AGO

Threatening Taiwan Gets China More Than Invading It Would

When responding to threats against Taiwan, U.S. leaders generally assume that Chinese leaders actually want to annex the island—as a recent report by the congressionally mandated U.S.-China Economic and Security Review Commission concluded. And Beijing has expressed numerous times that it considers any means justified in taking Taiwan. But over the last few decades, threatening Taiwan has been advantageous for China, often gotten it what it wanted, and has been more fruitful—and far less costly—than seizing the island by force would have been.
FOREIGN POLICY・3 HOURS AGO
AFP

A Lithuanian lawmaker visiting Taiwan said Monday there was "wide support" among the public in his country for warming relations with the island, after a row with China for allowing Taipei to open a de facto embassy in Vilnius. Matas Maldeikis led a delegation of parliamentarians from Lithuania, Estonia and Latvia that arrived in Taiwan on Sunday, the latest in a recent string of visits by foreign politicians despite Beijing's opposition. China claims sovereignty over self-ruled democratic Taiwan and vows to re-take it one day, by force if necessary. It has become increasingly bellicose towards Taiwan since the 2016 election of President Tsai Ing-wen, who rejects its stance that the island is part of Chinese territory.
WORLD・1 DAY AGO
Reuters

TAIPEI, Nov 29 (Reuters) - Taiwan and Europe must work together to defend against authoritarianism and disinformation, President Tsai Ing-wen told visiting lawmakers from the Baltic states of Lithuania, Latvia and Estonia on Monday. Lithuania has faced sustained pressure from China, which claims Taiwan as its own territory, since allowing...
POLITICS・1 DAY AGO
AFP

A rare joint opinion article by the ambassadors of China and Russia has sharply assailed President Joe Biden's plans for a virtual summit of democratic countries -- from which they were pointedly excluded. Calling the US plan "an evident product of its Cold-War mentality," ambassadors Anatoly Antonov of Russia and Qin Gang of China said the December 9-10 event would "stoke up ideological confrontation and a rift in the world, creating new 'dividing lines.'" The summit is meant to fulfill a campaign pledge by Biden to advance the cause of global democracy at a time when autocratic governments have been on the rise. But when the State Department on Tuesday published a list of about 110 invited countries -- without including Russia or China -- their reaction was furious.
FOREIGN POLICY・1 DAY AGO

BEIJING, Nov 29 (Reuters) - China does not plan to invite Western politicians who threaten a diplomatic boycott to the Beijing Winter Olympics, Chinese state media said on Monday, after U.S. President Joe Biden and Britain's Prime Minister Boris Johnson said their countries might limit an official presence at the Games.
CHINA・1 DAY AGO
albuquerqueexpress.com

Beijing [China], November 27 (ANI): Furious over US President Joe Biden's decision of extending an invitation to Taiwan for forthcoming online 'Democracy Summit', China urged the US to stop providing a platform to "Taiwan independence" forces. "China firmly opposes the US's invitation to the Taiwan authorities to participate in the...
FOREIGN POLICY・3 DAYS AGO
Business Insider

Rep. Elissa Slotkin said she received a "blunt message" from China's embassy in Washington, DC, telling her to call off the trip. It didn't happen.
FOREIGN POLICY・4 DAYS AGO
Reuters

TEGUCIGALPA, Nov 26 (Reuters) - A pledge by a leading Honduran presidential candidate to embrace China and de-emphasize Taiwan ties if she wins Sunday's election has prompted diplomatic jostling between Beijing and Washington as each seeks to exert influence on the Central American nation. Honduras, with a population of just...
FOREIGN POLICY・4 DAYS AGO
Shore News Network

TAIPEI (Reuters) – China’s military carried out “combat readiness” patrols in the direction of the Taiwan Strait on Friday as a U.S. Congressional delegation made a surprise visit to Taipei, offering strong support to the Chinese-claimed, democratically governed island. The five members of the U.S. House of Representatives arrived in...
FOREIGN POLICY・4 DAYS AGO
The Independent

Bipartisan lawmakers visited Taiwan on Thursday, a move that has angered the powers that be in China. Beijing considers the contested island part of its territory and did not sanction a meeting.Following the visit, Chinese Foreign Ministry spokesperson Zhao Lijian reminded the US “not to play the Taiwan card, because it’s a bad card, and a losing hand”, during a media briefing. He reminded the US not to breach the One-China policy, or send the wrong idea about “Taiwan independence”.The five US lawmakers paid a surprise visit to Taiwan President Tsai Ing-wen, which solidified the relationship between the eastern...
FOREIGN POLICY・4 DAYS AGO
americanmilitarynews.com

Tension between Beijing and Washington continues as the US government on Wednesday reportedly put several Chinese firms in its trade blacklist. The US stated that these companies were aiding to develop the Chinese military’s quantum computing efforts, according to Reuters. As many as eight China-based technology companies were added in...
FOREIGN POLICY・5 DAYS AGO
atlanticcitynews.net

China recalls ambassador to Lithuania over opening of Taiwan office

VILNIUS, Lithuania: China has downgraded its diplomatic ties with Lithuania from ambassador to charge d'affaires level, in retaliation for Lithuania allowing the opening of a Taiwanese representative office. China has expelled the Lithuanian ambassador and withdrawn its own ambassador, highlighting its intense sensitivity over the status of Taiwan, which Beijing...
FOREIGN POLICY・5 DAYS AGO