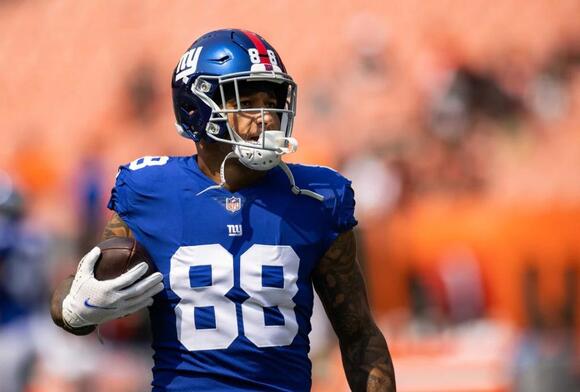 A calf injury prevented Engram from participating in Thursday’s practice, one day after he logged a full session. He missed the Giants’ first two games of the season with a calf injury as well.

Engram, 27, has 14 receptions for 127 yards and no touchdowns in four games this season. He has 230 catches for 2,547 receiving yards and 13 touchdowns since being selected by New York with the 23rd overall pick of the 2017 NFL Draft. 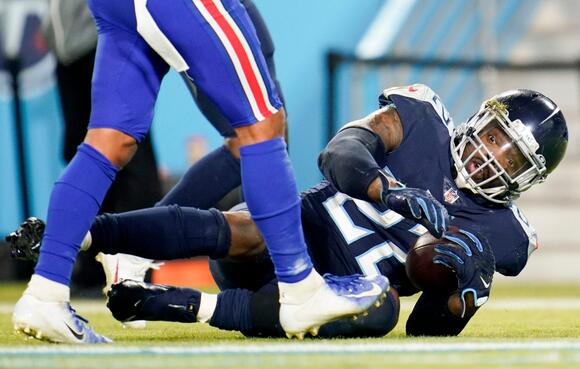 Shepard, 28, leads the team with 28 catches to go along with 299 receiving yards and one touchdown in four games this season.

The two players joined an injured list that includes star running back Saquon Barkley (ankle) and wide receivers Kadarius Toney (ankle) and Kenny Golladay (knee). Those three players did not practice for the second straight day on Thursday.

On the relatively bright side, wideouts Darius Slayton (hamstring) and John Ross (hamstring) were limited on Thursday after failing to participate in practice the previous day.

The injury-riddled Giants (1-5) host the Carolina Panthers (3-3) on Sunday in East Rutherford, N.J .

On Monday night, the Tampa Bay Buccaneers will try to end an uncharacteristic two-game skid. However, that could prove difficult without Antonio Brown. Just moments ago, Bucs head coach Bruce Arians announced Brown will not play on Monday night when Tampa Bay takes on the New York Giants. Brown has...
NFL・18 DAYS AGO
The Spun

Buccaneers quarterback Tom Brady has beaten every team in the NFL throughout his career but there’s one team that he loves to win against more than any other. It should come as no one’s surprise that it’s the New York Giants. Brady lost to New York twice in the Super Bowl while he was with New England, one of which came in 2008 when his team was vying for a perfect season.
NFL・16 DAYS AGO
Popculture

The New York Giants have fired a coach after their 30-10 loss to Tom Brady and the Tampa Bay Buccaneers Monday Night. On Tuesday, the team announced they had fired offensive coordinator Jason Garrett after less than two years on the job. The Giants offense has struggled this year, averaging 18.9 points per game this season, ranking 25th in the NFL. Last year, the offense ranked 31st in the league, averaging 17.5 points per game.
NFL・15 DAYS AGO
ClutchPoints

The New York Giants couldn’t get things done against the Miami Dolphins in Week 13, stumbling to a 20-9 defeat on the road. Typically after a tough loss, most players prefer to put it behind them and look towards the next game. Not Logan Ryan. The Giants DB tried to...
NFL・3 DAYS AGO

That rumble you heard on Tuesday was the sound of things being shaken up in East Rutherford, where head coach Joe Judge finally reached the boiling point with the offense and sent now-former offensive coordinator Jason Garrett packing. The timing is curious, to say the least, as rather than make...
NFL・14 DAYS AGO
USA Today

The New York Giants returned from their short Thanksgiving break and took the practice field on Friday with all eyes on the wide receivers. Neither Sterling Shepard (quad) nor Kadarius Toney (quad) had practiced all week and their final opportunity to take a step forward had arrived. Unfortunately, their respective statuses remained the same and neither is likely to play in Week 12 against the Philadelphia Eagles.
NFL・11 DAYS AGO
numberfire.com

New York Giants wide receiver Sterling Shepard (quad) did not practice Wednesday for Week 12 against the Philadelphia Eagles. Shepard hasn't played since Week 8 and it's unclear when he's expected to return. Kadarius Toney (quad) also picked up a DNP to start the week, but the Giants may have just been giving him a maintenance day after playing Monday night. Kenny Golladay and Darius Slayton would be the top receivers versus Philadelphia if Shepard and Toney are both out.
NFL・14 DAYS AGO
Sportsnaut

Can the Tampa Bay Buccaneers win back-to-back Super Bowls? Find out how the 2021 schedule sets up nicely for Tom Brady and Co. to make another title run.
NFL・2 DAYS AGO

New York Giants at Miami Dolphins: Keys to the Game

The New York Giants are playing the Miami Dolphins in an important Week 13 matchup. The Giants will be without quarterback Daniel Jones, and backup Mike Glennon will start. Glennon hasn’t won a football game since 2017. The Giants will also be without wide receivers Sterling Shepard and Kadarius Toney,...
NFL・4 DAYS AGO
Sportsnaut

Our week 14 NFL Start ‘Em Sit ‘Em fantasy football advice is here. Who should I start? Who should I
NFL・1 DAY AGO
Dolphin Nation

Report: New York Giants to be without multiple starters for Sunday’s game vs. Miami Dolphins

It has been a rough season for the New York Giants, who currently hold a 4-7 record. They’re looking to get a win over the Miami Dolphins this weekend, but it sounds like that’s going to be a tall task. The Giants will reportedly be without several key players for the contest.
NFL・5 DAYS AGO
WFAN Sports Radio

Could the Giants' backup quarterback next Sunday be…Logan Ryan?

The Giants are down to one healthy quarterback on the active roster in Jake Fromm, and while it may have been partially a joke or a jab at Tua Tagovailoa, DB Logan Ryan - a former HS QB - offered his services if needed for Sunday.
NFL・2 DAYS AGO
247Sports

The Egg Bowl rivalry means a lot to fans of both sides, even those who are in the midst of an NFL season. That is why New York Giants head coach Joe Judge, a Mississippi State alumnus, was sporting an Ole Miss hat during his Wednesday press conference. For the...
NFL・6 DAYS AGO
Sportsnaut

It’s safe to say, the Seattle Seahawks are headed nowhere fast. It’s a quick and sad fall from grace for
NFL・11 HOURS AGO
profootballnetwork.com

Week 14 is what we like to call “important.” The fantasy football playoffs start next week, making this weekend a make-or-break for many fantasy managers. If you’ve been playing the streaming game this year, there’s no point in stopping now. Let’s get a head start on our preparations with our Week 14 TE tiers and streamers.
NFL・1 DAY AGO
Sportsnaut

Heading for their tenth consecutive season without a playoff win, it’s time for the New York Giants to swing for
NFL・4 DAYS AGO