Braves' Jorge Soler Cleared to Play in Game 5 of NLCS vs. Dodgers 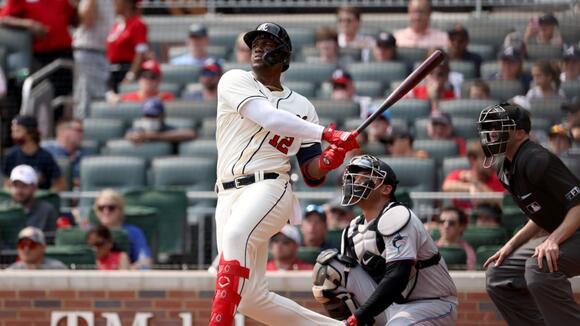 Soler previously tested positive for COVID-19 and was taken off Atlanta's NLDS roster on Oct. 12.

Braves outfielder Jorge Soler has been cleared to play by the Joint Committee to return from the COVID-19 related injured list and will be available for Game 5 of the NLCS on Thursday.

Soler will replace outfielder Cristian Pache in the active NLCS roster. The 29-year-old was traded to Atlanta from the Royals in July.

Soler recorded 48 home runs in 2019 but his numbers dropped during the shortened 2020 season before starting the 2021 season off slow.

Since joining there Braves, Soler has found a resurgence offensively, posting a .882 OPS in 55 games with Atlanta. He also played a big role in leading the Braves to their fourth consecutive National League East title.

Atlanta will look to advance to the World Series on Thursday as they host the Dodgers. First pitch is slated for 7:08 p.m. ET.

After coming up short in this year’s playoffs, the Los Angeles Dodgers could be going back to their fundamentals: acquiring another big name. Bob Nightengale of USA Today Sports reported this week that the Dodgers are interested in former Cy Young candidate Sonny Gray, having engaged in trade talks with the Cincinnati Reds. Fellow Reds starter Luis Castillo was also included in those discussions, Nightengale adds.
MLB・17 DAYS AGO
The Spun

It could be the end of an era in Los Angeles. Major League Baseball teams have until 5 p.m. E.T. on Sunday to make qualifying offers to free agents. The qualifying offer – a one-year deal for 2022 worth $18.4 million – is only available for certain free agents. If a player passes on a qualifying offer and signs elsewhere, their old team receives a MLB Draft pick compensation.
NFL・24 DAYS AGO
Dodgers Nation

After seven years with the Dodgers, Corey Seager is trading Dodger blue for a whole lot of green. A big, Texas-sized pile of green. Seager agreed to a 10-year, $325 million deal with the Texas Rangers on Wednesday, leaving LA in his rearview mirror. In the wake of Seager’s signing...
MLB・1 DAY AGO

Freddie Freeman has donned only a single uniform throughout his Major League Baseball career. And if the Atlanta Braves have their way, it’s the only uniform he’ll ever wear. But the path to that end may not come without come some hiccups. Freeman is currently a free agent and seeking...
MLB・18 DAYS AGO
Inside The Dodgers

It remains unclear where Freddie Freeman will end up, but one thing is clear: there are no worse places for Braves fans to see him than these 3 teams. Although Braves first baseman Freddie Freeman rejected the Braves’ initial extension offer of five years for $135 million, it doesn’t mean that he rejected the prospect of returning to Atlanta.
MLB・9 DAYS AGO

The Los Angeles Dodgers fell short of their goal of repeating as World Series champions and now face many difficult roster decisions this offseason. Chris Taylor was among the team’s players to reach free agency, which is a group that consists of several key contributors. He earned a first career...
MLB・10 DAYS AGO
FanSided

The hot stove will be cranking somewhat soon, but for now we’re living in the world of speculation. That’s what makes the offseason fun, anyway. For the Los Angeles Dodgers, a ton of heavy lifting has to get done with so many key players hitting free agency (plus a likely legal battle with Trevor Bauer that will determine money being freed up or thrown away). You already know who the team is in danger of losing.
NFL・18 DAYS AGO
Dodgers Nation

With the offseason upon us, we took to social media to ask fans something that is always a hot topic. Who would you bring back if you could bring one of your favorite former Dodgers? In this list, we featured Kiké Hernandez, Joc Pederson, Alex Verdugo, and Yasiel Puig. Thousands of fans chimed in with strong cases for each. We dive into some of the responses and give our pick.
MLB・23 DAYS AGO
dodgerblue.com

The Los Angeles Dodgers had Will Smith, Max Muncy, Justin Turner, Corey Seager, Trea Turner, Mookie Betts, Walker Buehler, Max Scherzer, Julio Urias and Kenley Jansen named among the nominees for the 2021 All-MLB Team. This is the third annual recognition for the top players, with winners being announced on...
MLB・21 DAYS AGO

The Los Angeles Dodgers bolstered their pitching staff on Monday afternoon. According to MLB insider Ken Rosenthal, the Dodgers have signed free-agent left-hander Andrew Heaney. Heaney spent the first half of the 2021 season with the Angels before he was traded to the New York Yankees. He struggled with both...
MLB・23 DAYS AGO
Sportsnaut

Last season, Eddie Rosario went from playing on a .500 Cleveland team to playing on another .500 team in the
NFL・1 DAY AGO
Inside The Dodgers

This offseason, possibly more than most, seems to be integral to the future of the Los Angeles Dodgers. Aside from being in contention for their top free agents Corey Seager and Max Scherzer, they may have to prepare for a time without Chris Taylor, who is a highly sought-after utility player. ...
MLB・2 DAYS AGO
FanSided

An MLB Network analyst eyes this former Dodger to replace Andrew McCutchen. When the Philadelphia Phillies declined the $15 million team option for fan-favorite outfielder Andrew McCutchen earlier this month — making him a free-agent — the left field position immediately became one of the biggest areas the organization has to address this offseason.
MLB・15 DAYS AGO
CBS Sports

As we count down the days until the CBA expires on Dec. 1, we've got some action on the MLB rumor front. So now let's have a quick stroll though those sun-dappled meadows of scuttlebutt... Sixth year sticking point with Freeman, Braves. Freddie Freeman, first baseman and warrior-poet of the...
MLB・14 DAYS AGO
Larry Brown Sports

The Los Angeles Dodgers could be coming up with their own version of a popular adage: if you can’t beat ’em, recruit ’em. Ken Rosenthal of The Athletic reported on Monday that the possibility has now emerged of the Dodgers pursuing beloved Atlanta Braves star Freddie Freeman to be the top left-handed hitter in their lineup. Corey Seager, who had been playing that role for the Dodgers, just left to sign a massive deal with the Texas Rangers.
MLB・1 DAY AGO
MLB

Dodgers tender contracts to all but one

LOS ANGELES -- All but one of the unsigned players on the Dodgers’ 40-man roster were tendered contracts on Tuesday ahead of MLB’s non-tender deadline, including four arbitration-eligible players: Cody Bellinger, Trea Turner, Julio Urías and Caleb Ferguson. Bellinger and Turner figure to earn the highest salaries of the quartet...
MLB・20 HOURS AGO
106.7 The Fan

Max Scherzer agrees to a record-breaking three-year contract with the New York Mets that sets a new precedent for MLB pitcher salaries. See the full contract details.
MLB・2 DAYS AGO