Putin says Biden was right to withdraw US troops from Afghanistan 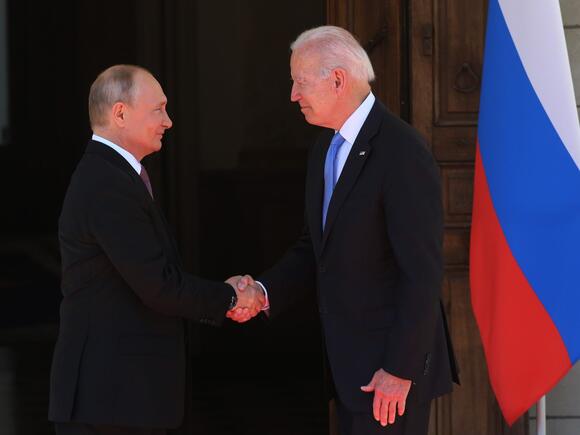 Putin's comments, which were directed at journalists and Russia experts, came during a week in which Russia hosted talks with senior representatives from the Taliban in Moscow. It's unclear why Putin offered this somewhat unexpected approval of one of the most significant foreign policy moves Biden has taken so far.

Russia, like the US, has not formally recognized the Taliban government in Afghanistan. But the Moscow meeting did result in the Taliban winning the backing of Russia and nine other regional powers in calling for a UN donor conference aimed at bolstering Afghanistan's fledgling economy and preventing a humanitarian disaster.

The Russian president on Thursday also called for the US to "unfreeze Afghan assets and give Afghanistan a possibility to solve top priority social and economic tasks," per the state-owned TASS news agency.

After the Taliban regained control of the country, the US froze billions of dollars the Afghan central bank holds in reserves, which are mostly stored in the US. Deputy Treasury Secretary Wally Adeyemo on Tuesday signaled the US would not budge in this regard , and that the Taliban would not gain access to the reserves.

"We believe that it's essential that we maintain our sanctions against the Taliban but at the same time find ways for legitimate humanitarian assistance to get to the Afghan people. That's exactly what we're doing," Adeyemo told the Senate Banking Committee.

"Our goal is to make sure that we are implementing our sanctions regime against the Taliban and the Haqqani network, but at the same time allowing for the permissible flow of humanitarian assistance into the country," Adeyemo said.

Though Putin apparently approves of Biden's decision to pull all US troops from Afghanistan, the president has faced fierce, bipartisan criticism in Washington over his handling of the withdraw. The pullout coincided with the Taliban regaining power in Afghanistan for the first time since 2001.

In the weeks following the Taliban takeover, the US evacuated hundreds of thousands of people from the country via the Kabul airport under extraordinarily chaotic circumstances.

Amid the evacuations, ISIS-K staged an attack that killed 13 US service members and 169 Afghans. The US retaliated with drone strikes, but in one instance mistakenly targeted an aid worker and killed 10 civilians, including seven children, in the process. When the last US troops left Afghanistan in late August, a number of Americans and thousands of Afghan allies were left behind - though some have since been evacuated.

The US war in Afghanistan, which lasted 20 years and was the longest conflict in US history, resulted in the deaths of tens of thousands of Afghans - including over 47,000 civilians - and 2,448 US service members, per Brown University's Costs of War project. It's also estimated to have cost roughly $2.3 trillion .

Last month, Putin said the US achieved "zero" via the war in Afghanistan and that the conflict resulted in "only tragedies."

The relationship between Russia and the US has hit a historic low in recent years, with tensions rising to heights not seen since the Cold War - largely stemming from Russia's 2014 annexation of Crimea and interference in US elections. Putin and Biden met in Geneva, Switzerland, in June to address the contentious dynamic. The meeting was largely fruitless , but Putin on Thursday said the Geneva summit was productive and a positive step forward for US-Russia relations.

Trump was wright to withdraw according to his plan, no one would have died or been left behind and our $billions in weapons wouldn't have been given to the Taliban. Dementia Joe didn't withdraw he committed to an unconditional surrender.

The Biden administration is now reportedly weighing plans to evacuate American citizens from Ukraine if Russia invades, creating an untenable security situation, according to sources. The contingency plan is being put together by the Pentagon, sources told CNN. Meanwhile, Ukraine has warned of a 'bloody massacre' and five million Ukrainian...
FOREIGN POLICY・5 HOURS AGO
The US Sun

VLADIMIR Putin mobilized troops on the Ukraine border while the US was distracted, and the crisis in Eastern Europe could “escalate” further as Russia displays its military intentions, an expert fears. Moscow has ramped up its wargames in recent weeks, sparking fears of a potential conflict. US intelligence forces detected...
POLITICS・7 HOURS AGO
fox40jackson.com

Biden-Putin call: Analysts say US president may still have a chance to derail Ukraine invasion

With a massive build of Russian troops near Ukraine’s border, Russia’s Vladimir Putin is indicating a willingness to risk a military conflict, but analysts say while the threat is serious, an invasion is not certain. The threat of an invasion will be the central subject of President Biden’s video call...
POLITICS・11 HOURS AGO
KCRG.com

Biden to meet with Putin over Russia troops on Ukraine border

One organization at Iowa State University received national recognition after spending the year helping local small businesses. Taylor Ginter from Iowa State University Extension and Outreach joins us to talk about how to introduce kids to cooking. Variety's two-day radiothon for The Compassion Fund kicks off Tuesday. Updated: 2 hours...
IOWA STATE・10 HOURS AGO

New satellite imagery showing Russian President Vladimir Putin amassing troops and resources on the Russia-Ukraine border is sparking fears of an invasion of the former Soviet state, with the possibility of war being a likely byproduct of President Biden's perceived weakness on the world stage, according to retired Army Gen. Jack Keane,
POLITICS・23 HOURS AGO
Fox News

“What President Biden Must Say to Russia’s Putin”

The Biden administration is grappling with the increasing likelihood that Russia will invade Ukraine, as U.S. intelligence now points to the fact that Moscow has plans to move 175,000 troops as early as next year. When President Biden speaks to Russian President Vladimir Putin he is expected to lay out the U.S. concerns over this aggression and reiterate U.S. support for a sovereign Ukraine. Former State Department Spokesperson Morgan Ortegus joins to break down why sanctions may not be enough to stop Russia from moving on Ukraine, President Putin’s motives to invade Ukraine to reestablish his country as a superpower, and what U.S. involvement should look like if Russia does invade Ukraine.
PRESIDENTIAL ELECTION・17 HOURS AGO
The Independent

Beyond Ukraine, plenty of issues for Biden-Putin talks

Russia’s military buildup on the border with Ukraine will be the top focus of talks between President Joe Biden and Russia’s Vladimir Putin on Tuesday, but there are plenty of other thorny issues on the table as well, including cyberattacks, human rights, and US-Russian relations that a Kremlin spokesman says are overall in “a rather dire state.”Fyodor Lukyanov, a leading Moscow-based foreign policy expert, suggested that progress on nuclear arms control and cybersecurity since the summit in Geneva will be discussed, and that regional topics like Syria, Afghanistan and North Korea might get a cursory mention, but mostly it...
POLITICS・17 HOURS AGO
floridianpress.com

Americans were outraged when President Joe Biden called for the hasty retreat of American Military forces out of Afghanistan last August, a move that left 13 American servicemen and women dead, and billions of dollars in military equipment behind. Military leaders and former military members of the U.S. Congress, including...
MILITARY・1 DAY AGO

KYIV, Dec 6 (Reuters) - Ukraine's President Volodymyr Zelenskiy on Monday said his armed forces were capable of fighting off any Russian attack, as the country marked its national army day with a display of U.S. armoured vehicles and patrol boats. U.S. President Joe Biden has pledged his "unwavering support"...
MILITARY・1 DAY AGO
Newsweek

U.S. intelligence has warned that as many as 175,000 Russian troops could be deployed to invade Russia's southern neighbor, a possible future NATO member.
POTUS・12 HOURS AGO
Business Insider

Washington — President Biden told Russian President Vladimir Putin that the U.S. and its European allies have "deep concerns" about Russia's buildup of troops near Ukraine, warning the Russian leader that the U.S. would pursue "strong economic and other measures" in the event of an invasion, the White House said.
POTUS・1 HOUR AGO

President Biden’s video call with Russia’s Vladimir Putin on Tuesday comes amid tensions over Russia's troop buildup near Ukraine. The buildup is raising alarms because Russia invaded and annexed territory in the eastern part of Ukraine in 2014. Senior foreign correspondent Charlie D'Agata reports.
POLITICS・10 HOURS AGO
The Guardian

A swift reprisal package against Russia – including US troops and Patriot missiles stationed in the Baltics, the cutting off of Russia from the Swift banking payments system and reinstated sanctions on the Nord Stream 2 gas pipeline – must be prepared now in case it invades Ukraine, the Latvian foreign minister has said.
POLITICS・8 HOURS AGO
Reuters

WASHINGTON, Dec 6 (Reuters) - U.S. President Joe Biden will warn Russian President Vladimir Putin of severe economic consequences should Russia go ahead with an invasion of Ukraine, a senior U.S. administration official said on Monday. Biden and Putin are to hold a video call on Tuesday as the United...
POTUS・19 HOURS AGO
Washington Examiner

Why Russia may attack Ukraine before Christmas

Russia is reinforcing a prospective invasion force that now encircles Ukraine's borders. Evincing the Biden administration's concern, U.S. military ground radar and signal intelligence aircraft were flying off Russian-occupied Crimea on Monday. U.S. and Ukrainian officials suggest that an invasion may occur by late January. But there are reasons to...
POLITICS・1 DAY AGO

Why would we go to war over Taiwan or Ukraine?

As Russian troops mass on Ukraine's borders and Chinese warplanes harass Taiwan, the Biden administration reiterates "rock solid" support for Ukraine and a possible U.S. willingness to "defend" Taiwan in the event of a Chinese attack. What is painfully absent from this conversation is the most critical question: Why should...
FOREIGN POLICY・1 DAY AGO
neworleanssun.com

Russian President Vladimir Putin will speak to his American counterpart Joe Biden on Tuesday via a secure video link, and the first part of the discussion will be broadcast to the public, the Kremlin has revealed. Speaking on Monday, spokesman Dmitry Peskov revealed that the two Presidents will then continue...
POLITICS・1 DAY AGO
Business Insider

Welcome back to 10 Things in Politics. Sign up here to receive this newsletter. Plus, download Insider's app for news on the go — click here for iOS and here for Android. Send tips to bgriffiths@insider.com. Here's what we're talking about:. An important school-board group is unraveling after it sent...
SPORTS・11 HOURS AGO
POLITICO

For Russia a zing, a snub for Beijing

With help from Paul McLeary. Send tips | Subscribe here | Email Alex | Email Quint. Monday goes to show that great power competition between the United States and its two greatest geopolitical rivals — China and Russia — is alive and well. The day began with a senior administration...
POLITICS・1 DAY AGO