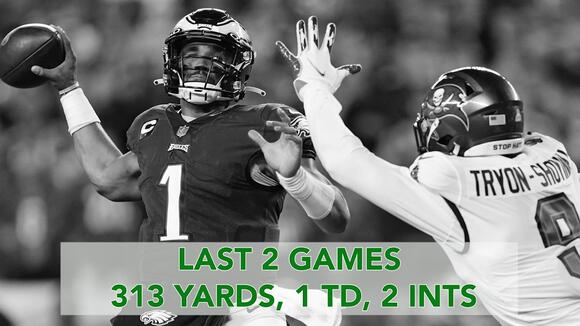 The Philadelphia Eagles hit the road this Sunday to face the 4-2 Las Vegas Raiders. The Eagles' struggling offense said goodbye to Zach Ertz , who was traded, but is likely to say hello again to Lane Johnson, who is expected to play after missing the past 3 games with a personal issue. That could help struggling quarterback Jalen Hurts get going against one of the NFL's top pass rushes. The Birds defense could also be in for a challenge as the Raiders feature a potent pass attack. 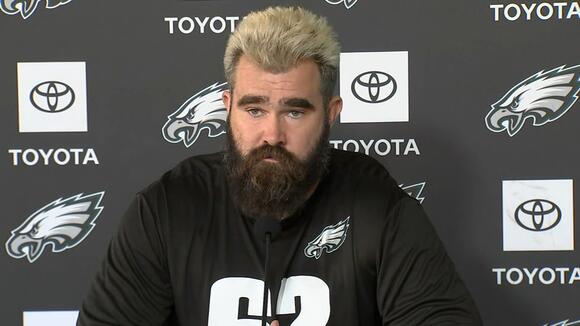 Jason Kelce on Ben Simmons saga: 'Just play better' Eagles center Jason Kelce has some advice for 76ers guard Ben Simmons: "Just play better, man." Ron Jaworski gets you ready for game day with the matchups to watch, the Raiders players that could wreck the game and an Eagles player in the spotlight. Plus, Jaws' final score prediction. Watch Jaws go three deep on the Eagles-Raiders matchup in this week's Three and Out. 1st Down: Will Dallas Goedert step up as TE1? 2nd Down: Negating the Raiders' pass rush, Maxx Crosby? 3rd Down: Can the defense keep up with the Raiders' passing game? Player to Watch on Raiders: Darren Waller Player to Watch on Eagles: Jalen Hurts Jaws' Prediction: Raiders 27, Eagles 21

The Eagles have some mojo after a big win in Denver. Jaws gets you ready for the Saints with what drives each offense, and some praise for Nick Sirianni.
NFL・10 DAYS AGO
The Spun

The Dallas Cowboys’ defense has taken a major hit. Cowboys head coach Mike McCarthy announced on Thursday morning that star pass rusher Randy Gregory will be out for multiple weeks. Gregory, arguably the Cowboys’ best defensive player this season, suffered a calf strain at practice on Wednesday. He will reportedly...
NFL・17 DAYS AGO
Insider

The Colts traded for Carson Wentz with hopes of becoming contenders. Now they're stuck in purgatory and faced with a brutal decision.
NFL・26 DAYS AGO
ClutchPoints

The Pittsburgh Steelers’ defensive lineman Cameron Heyward has been in hot water as of late due to a “punch” he gave the Los Angeles Chargers’ quarterback Justin Herbert in the fourth quarter of the Steelers-Chargers Week 11 matchup. The offense did not result in an ejection for Heyward, but has merited a review for a fine, as Ian Rapoport tweets:
NFL・6 DAYS AGO

It looks like the Madden Curse has some competition, thanks to Hall of Famer Peyton Manning and his younger brother, Eli. Since the launch of their Monday Night Football alternate telecast this season on ESPN2, the Manning brothers have featured six current NFL players as guests. In every case, that player and his team have gone on to lose the following week — a notable streak in a league that’s often a prisoner to superstition.
NFL・20 DAYS AGO
The Spun

The Philadelphia Eagles and the Pittsburgh Steelers reportedly discussed a major trade at the deadline earlier this week. Philadelphia star defensive lineman Fletcher Cox remained with the NFC East franchise, despite being mentioned in trade rumors throughout the season. However, while the Eagles held onto Cox, they reportedly discussed a...
NFL・21 DAYS AGO
Detroit Sports Nation

Terrell Owens is considered one of the best football players and wide receivers of his era. However, he battled through a lot of controversies during his career despite his stellar play on the field. Right now, we will take a look at Terrell Owens’ net worth in 2021. Terrell Owens’...
NFL・7 DAYS AGO

Bruce Arians says Bucs were warned not to rough the quarterback

TAMPA ― The Bucs were warned not to rough the quarterback prior to Sunday’s 36-27 loss at New Orleans that saw Saints starter Jameis Winston suffer a season-ending left knee injury on a horse-collar tackle by linebacker Devin White. Coach Bruce Arians said he informed his team during the week...
NFL・27 DAYS AGO
CBS Boston

Titans Release Adrian Peterson Ahead Of Game Vs. Patriots

BOSTON (CBS) — The Patriots will not be facing Adrian Peterson on Sunday afternoon. The veteran running back was waived by the Titans on Tuesday, ending his brief tenure with the team. Titans waive RB Adrian Peterson and sign WR Golden Tate + additional roster moves 13 Roster Moves 📰 » https://t.co/MNgusJHneN — Tennessee Titans (@Titans) November 23, 2021 Peterson, 36, had signed with the Titans following Derrick Henry’s injury. The future Hall of Famer rushed for 82 yards and a touchdown on 27 carries in three games for Tennessee. He ran for 40 yards on nine carries in Tennessee’s loss to Houston on Sunday. The Titans now have D’Onta Foreman, Jeremy McNichols and Dontrell Hilliard on the running back depth chart. Of that group, Foreman has the most rushing yards this season with 84 on 23 carries. McNichols has 69 rushing yards on 17 carries, and Hilliard has 35 yards on seven carries.
NFL・5 DAYS AGO
ClutchPoints

The Green Bay Packers are currently in a heated contest against the Los Angeles Rams. They’ve looked solid throughout the game but it seems Green Bay will be lacking firepower due to the latest injury update regarding Randall Cobb. According to Jourdan Rodrigue, “Randall Cobb (groin) is out for the...
NFL・9 HOURS AGO
The Spun

Seemingly minutes after Lincoln Riley left Norman, Oklahoma for sunny Southern California, Kliff Kingsbury was rumored to be a target for the Sooners. ESPN’s Adam Schefter first reported OU’s interest and one of Kingbury’s Cardinals players reacted on Twitter. “Killin’ it on the field and at the negotiating table,” defensive...
NFL・9 HOURS AGO

A Dallas Cowboys’ player that was ejected earlier in the game took a shot at the officials from the locker room after a controversial pass interference call. Rookie cornerback Kelvin Joseph was ejected alongside Las Vegas Raiders safety Roderic Teamer, and Joseph expressed how upset he was with a late pass interference call while not on the field.
NFL・3 DAYS AGO
The Spun

An Ohio State quarterback is on his way out of Columbus. On Sunday, Buckeyes‘ backup QB Jack Miller III entered the transfer portal. The news comes courtesy The Athletic’s Max Olson. Miller, a redshirt freshman, was suspended by the school earlier this month after an impaired-driving arrest. He was Ohio...
OHIO STATE・10 HOURS AGO
The Spun

The Philadelphia Eagles have agreed to a major contract extension with fourth-year tight end Dallas Goedert. According to reports from NFL Network insider Ian Rapoport, the deal is worth $57 million with $35 million guaranteed, making him the third highest-earning tight end behind George Kittle and Travis Kelce with an average annual salary of $14.25 million.
NFL・9 DAYS AGO
bucsreport.com

The Tampa Bay Buccaneers are signing a wide receiver. No not that one, a former Buccaneer, wide receiver Breshad Perriman. Look for Perriman to start on the practice squad but soon be elevated to the 53-man roster. There’s no official corresponding move by the Buccaneers yet, but this all but...
NFL・19 DAYS AGO
247Sports

Excerpt: Kelly on the Impending Blow Up of the Transfer Portal

In this portion of UCLA head coach Chip Kelly's media presser he discussed roster management, what he describes as the blow up of the transfer portal, and helping potential transfers find a landing spot. For the full video interview, GO HERE.
COLLEGE SPORTS・1 DAY AGO
ClutchPoints

The Carolina Panthers suffered an embarrassing loss to the Miami Dolphins in Week 12 as they lost 33-10. Cam Newton played horrible for the Panthers as he went 5-21 for only 92 yards and two interceptions. After the game, the Panthers quarterback had this to say,. “Nothing that they did...
NFL・9 HOURS AGO
Larry Brown Sports

Sound the alarm because Boogie is officially back. The Milwaukee Bucks are signing former All-Star center DeMarcus Cousins to a one-year deal, ESPN’s Adrian Wojnarowski first reported on Sunday. The 31-year-old Cousins put up 7.8 points and 4.5 rebounds a game last year between the Houston Rockets and the LA...
NBA・11 HOURS AGO
The Spun

On Friday afternoon, the Nebraska Cornhuskers hosted the Iowa Hawkeyes in a matchup of Big Ten West programs. Early on, it looked like Nebraska would finally end the season on a high note. The Huskers jumped out to a 21-6 lead in the second half and looked to be en route to a comfortable win.
NEBRASKA STATE・2 DAYS AGO