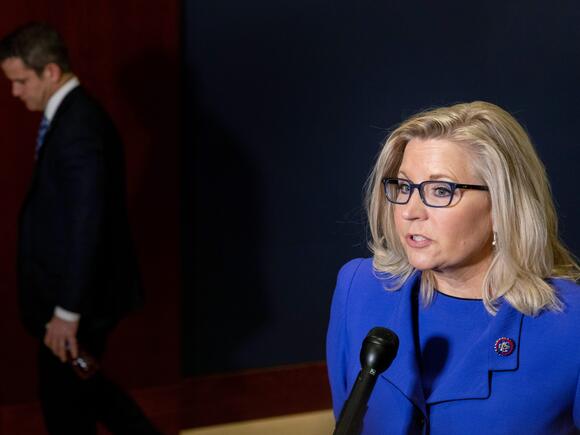 The House of Representatives voted on Thursday to hold Steve Bannon, the former White House chief strategist and a close confidant of former President Donald Trump, in criminal contempt of Congress. The vote will trigger a referral to the Justice Department, which will then decide whether to bring formal charges against Bannon.

The final vote was 229-202, with 9 Republicans joining Democrats to hold Bannon in criminal contempt.

Here are the Republicans who broke party lines:

Cheney and Kinzinger were widely expected to vote to hold Bannon in contempt given that they both serve on the select committee investigating the January 6 Capitol insurrection. Both lawmakers, as well as Meijer, Gonzalez, Upton, Herrera Beutler and Katko, joined Democrats in voting to impeach Trump over his role in catalyzing the deadly riot.

Idaho Rep. Mike Simpson initially voted "yes" on the contempt resolution but later changed his vote to a "no."

Mace said after her vote that although she voted against the select committee, it's now a "duly formed" panel.

"I'm going to fight for subpoena powers that no matter who's in power because we've got to have the opportunity and the ability to investigate," the South Carolina lawmaker told reporters .

Thursday's vote to hold Bannon in contempt of Congress came after he defied a subpoena from the January 6 select committee calling on him to provide documents and testimony in connection to his actions before, during, and after the siege.

House Republican whip Steve Scalise put out a statement earlier Thursday urging members to vote against the measure, arguing that Democrats were "pursuing a partisan agenda to politicize the January 6th attack." And House Minority Leader Kevin McCarthy said at his weekly news conference that the subpoena was "invalid."

"He has the right to go to court to see if he has executive privilege or not," McCarthy said of Bannon. "I don't know if he does or not, but neither does the committee."

Democratic Rep. Sean Patrick Maloney, the chair of the House Democrats' campaign arm, said he will use Republicans' opposition to attack them in the upcoming 2022 midterm elections.

"You better believe it," Maloney said. "They should be accountable for undermining the rule of law. Voters should care about that."

Maloney added that he hopes the contempt vote will produce cooperation between "witnesses whose testimony Americans deserve to receive" and the January 6 select committee.

It is unbelievable that almost the entire Republican party voted to cover for someone who was involved in the planning of the terrorist attack on our Capitol.

What is wrong with these Republicans. A subpoena is a legal document that must be upheld. Bannon is a nobody and a drunk. Why are they trying to protect him?

The House Select Committee to Investigate the Jan. 6 Attack on the U.S. Capitol has been busy. In the five months since the probe was launched, the committee has issued dozens of subpoenas to high-profile members of former President Trump’s circle, as well as a smattering of other MAGA-affiliated figures involved in the effort to overturn the results of the 2020 election. The process has been fraught for a number of reasons, but revelations that have emerged from Rolling Stone’s conversations with cooperating sources indicate the committee could be sitting on a mountain of material — material that could clarify what...
CONGRESS & COURTS・17 HOURS AGO
Newsweek

Ex-KKK Leader Running as Republican for Office in Georgia

Doles said the breakup of the U.S. is "inevitable." He also remains in contact with well-known white supremacists on social media.
GEORGIA STATE・7 HOURS AGO
MSNBC

On the surface, Congress was able to avoid a government shutdown with relatively little drama this week. Facing an inflexible deadline, Democratic and Republican leaders gradually worked toward a solution, confident that an ill-timed crisis would be avoided when all was said and done. With this in mind, the Democratic-led...
PRESIDENTIAL ELECTION・18 HOURS AGO
Business Insider

John Eastman is the second witness who has invoked or plans to invoke the Fifth Amendment in response to a January 6 committee subpoena.
PRESIDENTIAL ELECTION・14 HOURS AGO

Wyoming Republican Rep. Liz Cheney, vice chairwoman of the House select committee tasked with investigating the Jan. 6 attack on the U.S. Capitol, issued a warning to former President Donald Trump amid his posturing that he wanted to debate members of the committee: Lie, and there will be criminal penalties.
CONGRESS & COURTS・2 DAYS AGO
Business Insider

Trump has criticized Katie Britt, saying she's "not in any way qualified and is certainly not what our Country needs or not what Alabama wants."
CULLMAN, AL・16 HOURS AGO
Business Insider

AOC said the GOP has been given "freedom to incite" without consequences: "They don't have to pay for the security required from their acts — we do."
CONGRESS & COURTS・2 DAYS AGO
WashingtonExaminer

Wyoming Rep. Liz Cheney said that it was House Minority Leader Kevin McCarthy’s own fault that the House select committee formed to investigate the Jan. 6 attack on the Capitol had no Republican members appointed by him.
CONGRESS & COURTS・1 DAY AGO

Congresswoman Marjorie Taylor Greene continued her efforts to whitewash the truth about the 6 January attack on the US Capitol in an interview that was published on Wednesday.Ms Greene made the comments while speaking with Darren Beatie, a former speechwriter for the Trump White House who was ousted after it was revealed that he had attended a conference frequented by white nationalists, on Mr Beatie’s show hosted on Rumble TV, a site seeking to be a conservative alternative to YouTube.She echoed an often-repeated falsehood popular among conservatives during the interview: the assertion that Speaker Nancy Pelosi and other Democrats...
PRESIDENTIAL ELECTION・2 DAYS AGO
WashingtonExaminer

The House select committee tasked with investigating the Jan. 6 attack on the Capitol has subpoenaed the phone records of private U.S. citizens but has not subpoenaed the records of members of Congress, according to Indiana Republican Rep. Jim Banks and another GOP aide.
CONGRESS & COURTS・2 DAYS AGO
Business Insider

Jena Griswold told The Washington Post that there was a concerted campaign to place Trump allies in roles overseeing elections.
COLORADO STATE・3 DAYS AGO
Business Insider

Rep. Nancy Mace said "QAnon members of the conference" were "never going to listen to leadership, and they're not normal in any way shape or form."
CONGRESS & COURTS・2 DAYS AGO

Despite Trump’s strong support for Rep. Mo Brooks, GOP senators have donated to Katie Britt and appeared with her at events.
ALABAMA STATE・1 DAY AGO
Reuters

WASHINGTON, Nov 30 (Reuters) - A new fault line opened between Republicans in the U.S. House of Representatives on Tuesday, as lawmakers squabbled publicly over accusations of religious bigotry and racism among party conservatives. In a fight that could further complicate Republican efforts to forge unity ahead of next year's...
CONGRESS & COURTS・3 DAYS AGO
Washington Post

The House select committee investigating the Jan. 6 attack on the U.S. Capitol voted unanimously Wednesday to hold former Trump Justice Department official Jeffrey Clark in criminal contempt for failing to cooperate with its inquiry. It is unclear when the full House could take up the contempt resolution, but if...
PRESIDENTIAL ELECTION・2 DAYS AGO
Reuters

WASHINGTON, Dec 1 (Reuters) - The U.S. congressional committee probing the deadly Jan. 6 assault on the Capitol voted on Wednesday in favor of contempt of Congress charges against Jeffrey Clark, a senior Justice Department official under former President Donald Trump. The seven Democratic and two Republican members of the...
CONGRESS & COURTS・2 DAYS AGO

If President Joe Biden s $2 trillion social and environment package was a Broadway show, its seven months on Congress stage could qualify it as a hit. But lawmaking isn't show business, and many Democrats worry that with the curtain falling soon on 2021, time is not their friend.Each passing day threatens to push final action into 2022, an election year when control of Congress will be at stake and lawmakers seeking reelection will become ever more wary of casting tough votes.Democratic Senate Majority Leader Chuck Schumer wants to end his party's disagreements and finally squeeze the bill...
PRESIDENTIAL ELECTION・10 HOURS AGO
NBC News

The House committee investigating the Jan. 6 attack on the U.S. Capitol interviewed Georgia Secretary of State Brad Raffensperger for several hours Tuesday in a meeting that included discussion of former President Donald Trump's efforts to overturn the 2020 election results. “I spoke to the January 6th committee to ensure...
GEORGIA STATE・3 DAYS AGO
blogforarizona.net

But as more controversies crop up in the House Republican conference, ultra-conservatives are increasingly emboldened.
CONGRESS & COURTS・2 DAYS AGO