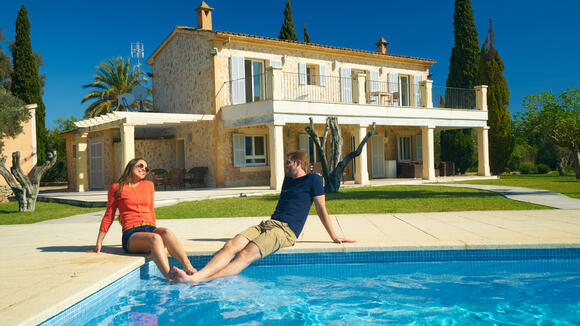 Demand for second homes was 60% higher in September than it was before the coronavirus pandemic hit, according to a new report from Redfin. This represents a slowdown from the record 112% surge recorded in March and a slight acceleration from July’s 40% demand .

See: Millennial Trend of Co-Buying Homes Soars 771% in 7 Years – How It Works
Find: Zillow Finds 2M Renters Can Afford to Buy Homes Thanks to Remote Work During COVID-19 Pandemic

The report, which did an analysis of mortgage-rate lock data from real estate analytics firm Optimal Blue, created a seasonally-adjusted index to adjust for seasonal patterns and allow for simple comparisons of second-home demand during and before the pandemic.

Mortgage-rate locks are agreements between a homebuyer and a lender that allows the homebuyer to lock in a particular interest rate on their mortgage for a certain period of time. The move offers protection against future interest-rate increases, and homebuyers must specify whether or not they are applying to secure a mortgage for a primary or second home and investment property.

The popularity of second homes skyrocketed as the pandemic began, as city dwellers quickly flocked to suburbs and less populated areas in search of second homes and reprieve from urban areas. The surge in demand for second homes started to slow as cities lifted stay-at-home restrictions and the initial shock of the pandemic faded. The overall housing market began to cool along with the fading of the spring homebuying season, says Redfin.

Given these assumptions, the recent uptick in demand for second homes could suggest new people are now entering the market on Delta variant concerns.

See: Most and Least Expensive States for Household Bills
Find: Saving for a House: Tips To Build Your Down Payment Fund

Redfin says a new Fannie Mae rule could also have contributed to the slowdown in demand for vacation homes. The government-sponsored agency announced a plan in March to limit the number of loans it gave out for second homes and investment properties, thus tightening the reins on the second-home market overall. Though, almost as soon as it announced the rule, the agency also said it would remove the restrictions in an effort to boost the overall housing supply — likely a reaction to surging inflation and fears that homebuyers would pull back to damaging levels .

To say the 2021 real estate market was competitive might be the understatement of the year -- at least in many areas. White hot buyer demand from 2020 carried over into the new year, creating...
HOUSING・15 HOURS AGO
GOBankingRates

Home prices rose by nearly 20% over the last year, an astonishing rate of growth that was faster and more intense than even the run-up to the housing crash of 2008, according to Fortune -- and that...
REAL ESTATE・2 DAYS AGO
GOBankingRates

No doubt about it -- the real estate market has been white hot in 2021. But if you didn't make a move this year, and you're thinking about buying or selling -- or both -- next year, you'll want to...
REAL ESTATE・3 DAYS AGO
money.com

After increasing for 14 straight months, home price growth finally slowed in September. The latest CoreLogic Case-Shiller Home Price Index released Tuesday shows home prices increased 19.5% between September 2020 and September 2021. That's down from a record 19.8% year-over-year increase in August. To be sure, even as there are...
BUSINESS・8 HOURS AGO

A 24/7 Wall St. analysis reveals that debt increased the most during the COVID-19 pandemic in this county in Texas.
PUBLIC HEALTH・14 HOURS AGO
The Mint Hill Times

Will Millennials be Responsible for Higher Home Prices?

MINT HILL, NC – It seems like millennials get blamed for quite a bit and the higher home prices might fall on their shoulders, too. Some believe these buyers could fuel a housing frenzy for years. A bit part of the issue is the lack of homes for millennial buyers, which causes prices to go up due to bidding wars.
REAL ESTATE・22 HOURS AGO
The Motley Fool

How Risky Is Co-Buying a Home?

Buying a house with a friend or partner can be a great way to save money and build equity but comes with a lot of risks.
REAL ESTATE・12 HOURS AGO
news3lv.com

LAS VEGAS (KSNV) — The number of people visiting Las Vegas appears to be getting closer to pre-pandemic levels. There were nearly 3.4 million people staying in town in October, according to new figures from the Las Vegas Convention and Visitors Authority. That's nearly double the visitor volume in October...
LAS VEGAS, NV・9 HOURS AGO

Home prices rose 19.5% in September compared to a year ago, according to the S&P CoreLogic Case-Shiller national home price index. But even that huge increase was a slight slowdown from August, when prices rose by 19.8%. September marked the first time year-over-year gains have decreased since May, according to the report.
BUSINESS・1 DAY AGO
Money

Skyrocketing home prices have plagued buyers for much of the last year. While 2022 will likely see more of the same, homebuyers will at least have one new crutch to lean on: Bigger government-backed mortgage loans. According to the Federal Housing Finance Agency, conforming loan limits — or the maximum...
REAL ESTATE・1 DAY AGO
Fortune

Subscribe to Fortune Daily to get essential business stories straight to your inbox each morning. A perfect storm. That's the best way to describe the red-hot housing market we've seen from coast-to-coast during the pandemic. It was spurred by a combination of recession-induced low mortgage rates, remote work allowing buyers to sprawl further away from their workplace, and a demographic wave of first-time millennial homebuyers entering into the market. Of course, years of under-building means there simply aren't enough homes available to meet this demand. Cue record price growth.
BUSINESS・2 DAYS AGO
Cheddar News

Jared Kessler, CEO of real estate firm EasyKnock, joined Cheddar to talk about the housing market staying hot at a time it usually cools down. He attributed part of it to low interest rates and buyers wanting to secure homes before they begin rising again. "We're definitely, at some point, in for higher rates," he said. "Right now, that's a very tough question for the Federal Reserve."
REAL ESTATE・2 DAYS AGO
Travel Weekly

Travel recovery remains “slow and uneven” across the world due to varying degrees of restrictions, vaccination rates and traveller confidence. Revenues from international tourism could reach $700-$800 billion this year, a small improvement from 2020 but less than half the $1.7 trillion recorded in 2019, according to the UN World Tourism Organisation.
PUBLIC HEALTH・2 DAYS AGO
FOXBusiness

Pending home sales rebounded in October, motivated by fast-rising rents and an anticipated increase in mortgage rates. According to the National Association of Realtors' pending home sales index, which tracks the number of homes that are under contract to be sold, rose 7.5% to a reading of 125.2, but are down 1.4% year-over-year. An index of 100 is equal to the level of contract activity in 2001.
REAL ESTATE・2 DAYS AGO
MarketWatch

Pending home sales surge higher in October — will the omicron variant trip up the real-estate market?

Every region of the U.S. saw an increase in the number of buyers signing contracts to purchase homes, but the housing market's trajectory may be dependent on the omicron variant of the virus that causes COVID-19.
REAL ESTATE・2 DAYS AGO
The Motley Fool

Here's the Average Mortgage for a Newly Built Home. Can You Swing It?

Borrowers are taking on higher mortgages to keep up with rising construction costs. The cost of new construction has risen due to supply chain issues and inflation. The average mortgage amount for a newly built home is over $412,000. There are plenty of benefits to buying new construction, like the...
BUSINESS・4 DAYS AGO
atlanticcitynews.net

DALLAS - Determined to reclaim Thanksgiving traditions that were put on pause last year by the pandemic, millions of Americans will be loading up their cars or piling onto planes to gather again with friends and family. The number of air travelers this week is expected to approach or exceed...
TRAVEL・6 DAYS AGO
Orlando Business Journal

Heading into Thanksgiving and the holiday shopping rush, Florida had its lowest four-week run of new unemployment claims since before the onset of the Covid-19 pandemic. Meanwhile, the number of claims nationally, driven by strong job growth amid pre-holiday consumer spending, hit a five-decade low. The U.S. Department of Labor...
PUBLIC HEALTH・6 DAYS AGO
People's Defender

Thanksgiving travel to rebound to near pre-pandemic levels

Housing Market Cooled in October, But Relief For Homebuyers Was Short-Lived

Pending sales rose 3% from September, and early indicators of demand are strengthening. The median price of homes sold in October was $378,700, according to a new report from Redfin (redfin.com), the technology-powered real estate brokerage. This is up 13% from a year earlier, the lowest growth rate since December 2020.
REAL ESTATE・7 DAYS AGO