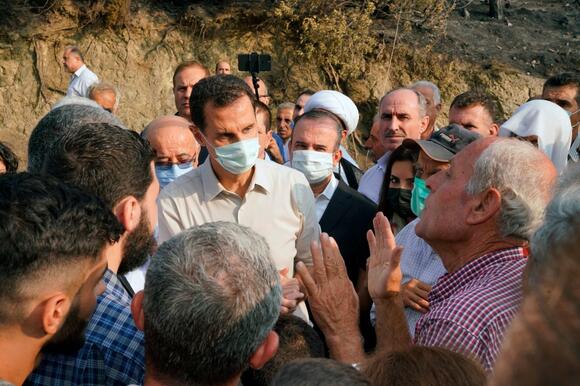 The publicized executions of a large group of people are rare in war-torn Syria, where a decade-old conflict has left hundreds of thousands dead and displaced half the country’s population, including 5 million refugees outside the country.

Wildfires broke out in several Middle Eastern countries in October 2020 amid a heatwave that was unusual for that time of the year, leaving Syria particularly hard-hit. Three people were killed in the blazes, which also burned wide areas of forests, mostly in government-controlled regions of Latakia and the central province of Homs.

President Bashar Assad’s hometown of Qardaha in Latakia province was hard hit by the fires, which heavily damaged a building used as storage for the state-owned tobacco company, part of which collapsed. Assad made a rare visit to the region shortly after the fire was brought under control.

A statement issued by the Justice Ministry Thursday said those executed a day earlier were “criminals who carried out terrorist attacks that led to deaths and damage to state infrastructure and public and private property through the use of flammable material.” It said 11 others were sentenced to life in prison in the same case.

The statement did not provide further details on the circumstances of the executions or how they took place. For civilians, the death penalty in Syria is usually carried out by hanging. Syrian laws allow for the death penalty for offenses including terrorism, espionage, treason, arson and army desertion.

She added that death sentences are often passed through secret trials or during court proceedings which lack basic safeguards such as the right to a lawyer, and with confessions routinely extracted under torture or other ill-treatment and duress.

In 2017, a report by Amnesty International said as many as 13,000 people were executed in secret mass hangings at the Saydnaya prison in Syria between September 2011 and December 2015, at the height of the Syrian civil war. It said the alleged executions were authorized at the highest levels of the Syrian government.

The report said that between 20 and 50 people were hanged each week, sometimes twice a week, at the Saydnaya prison in what the organization called a “calculated campaign of extrajudicial execution.” U.N. human rights experts have also reported the mass killing of detainees held by the government in official and makeshift detention centers that often take place out of sight.

Those executed Wednesday were among dozens of people detained in late 2020 who confessed that they began planning to ignite fires starting in August last year, the Justice Ministry statement said. They started fires in September that affected 280 towns and villages and damaged 370 homes, the ministry added.

Police treated us like criminals, say families of girls trafficked to Islamic State in Syria

Details of how police attempted to criminalise British families whose children were trafficked to Islamic State (IS) in Syria are revealed in a series of testimonies that show how grieving relatives were initially treated as suspects and then abandoned by the authorities. One described being “treated like a criminal” and...
PUBLIC SAFETY・1 DAY AGO
abc17news.com

WASHINGTON (AP) — Defense Secretary Lloyd Austin has ordered a full review of a U.S. airstrike in Syria in 2019 that killed dozens, including women and children, and was not properly reported up the chain of command. Pentagon press secretary John Kirby said Austin appointed a four-start Army general to undertake a 90-day review. Gen. Michael X. Garrett will look at investigation reports previously produced about the incident, which happened in the final days of the U.S. battle against the Islamic State group in eastern Syria. Among other things, Garrett will assess civilian casualties from the incident and whether the strike violated the laws of war.
MILITARY・6 DAYS AGO
Idaho8.com

United States special operations forces in northeastern Syria have been quietly visiting local villages to help provide medical care to communities which have seen little health care in the wake of years of war. The visits are done in partnership with the Syrian Defense Forces, (SDF) which operate in the...
U.S. POLITICS・2 DAYS AGO

WASHINGTON - The U.S. Agency for International Development (USAID) says the wheat seeds it recently provided to farmers in northeast Syria meet "high standards for safety and quality." The announcement comes after claims by the Syrian government that the seeds donated by the U.S. agency "are not suitable for cultivation."
AGRICULTURE・10 DAYS AGO
UPI News

Nov. 30 (UPI) -- After forcibly sweeping back to power in Afghanistan in August, the Taliban executed over 100 former police and military members, according to a report released Tuesday by Human Rights Watch. The 25-page report, titled "No Forgiveness For People Like You," describes how the Taliban rounded up...
PUBLIC SAFETY・5 DAYS AGO
dallassun.com

Washington [US], November 30 (ANI/Sputnik): Pentagon chief Lloyd Austin ordered a new investigation into a deadly US airstrike that killed dozens of women and children in Syria in 2019, The New York Times reported on Monday citing a defence official. US Army Forces Command chief Michael Garrett will lead the...
MILITARY・6 DAYS AGO
The Independent

The head of a U.N. team investigating atrocities in Iraq said that Islamic State extremists committed crimes against humanity and war crimes at a prison in Mosul in June 2014, where at least 1,000 predominantly Shiite Muslim prisoners were systematically killed.Christian Ritscher told the U.N. Security Council on Thursday that evidence collected from mass graves containing the remains of victims of executions carried out at Badush Central Prison and from survivors shows detailed preparations of the attack by senior Islamic State members followed by an assault on the morning of June 10 that year.“Prisoners captured were led to sites...
WORLD・2 DAYS AGO

US strike may have killed civilians in Syria, Pentagon says

The US military said it would open an investigation into possible civilian casualties inflicted in a recent drone strike on Syria, with Pentagon officials claiming the attack was meant to target a 'senior al-Qaeda leader.?. US Central Command, which oversees military operations around the Middle East, announced the upcoming probe...
MILITARY・1 DAY AGO
Business Insider

Biden winced when he learned that an ISIS-K suicide bombing had killed US troops in Kabul in late August, per the NYT. "The worst that can happen has happened," Biden said during a White House meeting, the Times reported. Days later, Biden would say that the Afghanistan withdrawal was an...
MILITARY・5 DAYS AGO
The Independent

United States’ satellites are constantly under attack, and China may become the dominant space power by the end of the decade, according to a Space Force general.“The threats are really growing and expanding every single day. And it’s really an evolution of activity that’s been happening for a long time,” General David Thompson, the Space Force’s first vice chief of space operations, told the Washington Post.“We’re really at a point now where there’s a whole host of ways that our space systems can be threatened.”The United States must deal with “reversible attacks” on satellites – those which do not...
MILITARY・3 DAYS AGO
MSNBC

Young Girl Who Was Sold to 'Old Man' for $2,200 in Afghanistan Rescued and Relocated

Parwana Malik was sold by her father in October after he couldn't afford food for the rest of the family.
FOOD & DRINKS・2 DAYS AGO
POLITICO

It has been revealed that agents from Israel's espionage organization Mossad persuaded Iranian scientists to damage the nuclear plant where they worked by carrying explosives disguised as food boxes. The plant's own internal power system, which powered centrifuges for enriching uranium and was shielded underground by 20 feet of reinforced...
INDUSTRY・2 DAYS AGO
The Jewish Press

Biden’s Dirty Deal With the Taliban

Every week new revelations arrive about the scale of Biden’s betrayal in Afghanistan. After months of claiming that only a few hundred Americans had been abandoned behind enemy lines, the real numbers are still growing. Shocking reports continue to come to light including a military memo which claims that over a hundred family members of servicemen may still be trapped under Taliban rule.
U.S. POLITICS・16 DAYS AGO
tucsonpost.com

More than 1,000 American National Guard troops will soon be shipped to Eastern Africa for a counter-terrorism mission, intended to shore up US bases dotting the region amid a series of ongoing combat and training operations. The military announced the upcoming deployment in a statement earlier this week, saying that...
MILITARY・3 DAYS AGO
americanmilitarynews.com

People gathered in cities including Rotterdam, Rome, Vienna, and Zagreb as many countries ask for vaccination or negative test proof.
PROTESTS・14 DAYS AGO