FRISCO - The Dear Reader will note that we put the word “proposed trade” in quote marks to illustrate that, yeah, it’s “proposed.”

Not by an actual NFL team.

ESPN’s Bill Barnwell, we are happy to say, doesn’t seem to take himself too seriously on this regular project of his, “proposing” trades.

But he presents his ideas seriously.

So … should we take seriously one of his Dallas Cowboys ideas?

He notes that the Cleveland Browns “have to be nervously eyeing their trainer's room each week” because of their offensive line issues.

So, he writes, “adding a veteran tackle is something they would likely love to do if the right opportunity arises.”

And he sees Dallas’ Ty Nsekhe as that “opportunity,” suggesting that “Nsekhe could be expendable.”

Cowboys NFL trade hints? After 30 years, we speak "Jerry-ese.'' And it is a skill that comes in mighty handy every year as the NFL trade deadline approaches.

LISTEN: Do Cowboys Need No. 1 Seed?

Locked On Cowboys: Do The Cowboys Need The No. 1 Seed?

Our problem with that logic: Dallas just went through a disastrous 2020 made that way due to injuries to QB Dak Prescott and his O-line. And even this year, they’ve experienced a suspension for tackle La’el Collins and two injuries scares in one week for tackle Tyron Smith.

So why is Dallas wanting to trade away tackles again?

Barnell’s weird “why” is his belief that Dallas “would get back linebacker depth in Wilson,” as he believes a “replacement” is needed for the released-to-the-Packers linebacker Jaylon Smith.

Um … Jaylon was released because he was already being replaced in Dallas, slipping to the fifth spot on the totem pole of a team that starts two linebackers, and slipping behind rookie Jabril Cox.

You, Dear Reader, may have noticed over the weekend that the Houston Texans cut veteran linebacker Joe Thomas, who was highly-respected as a player in Dallas and who before that played for coach Mike McCarthy in Green Bay.

Dallas didn’t blink. Dallas has its backup linebackers. And it says here that Dallas has no reason to sell off its tackles, either.

Subscribe to the Cowboys Fish Report on YouTube for constant daily Cowboys live-stream podcasts and reports from Inside The Star! 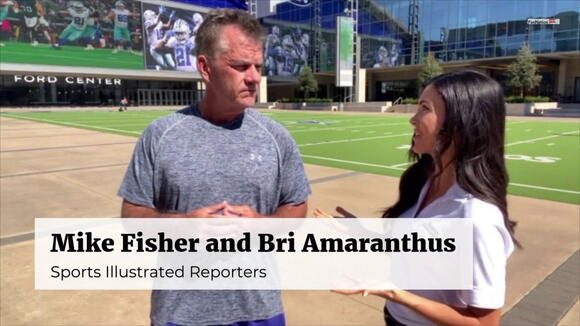 FRISCO - Could Dallas Cowboys Hall-of-Fame quarterback Troy Aikman be changing TV jobs?. Amazon is taking over the NFL’s Thursday Night Football broadcasts next year, and the company reportedly wants to make a gigantic move involving its announcing lineup. And including Aikman would be gigantic. According to Mike McCarthy of...
NFL・10 DAYS AGO
thespun.com

Ezekiel Elliott likes to keep his private life out of the spotlight, though the Dallas Cowboys star is reportedly in a longterm relationship. The star NFL running back is reportedly dating Halle Woodard. Elliott and Woodard have reportedly been dating for more than a year. The former Ohio State Buckeyes...
NFL・26 DAYS AGO
FanSided

The Dallas Cowboys clearly have something in running back Tony Pollard. Here are three hypothetical trade destinations for Ezekiel Elliott if they were to plan on moving him. The Dallas Cowboys participated in a thrilling Thanksgiving Day game against the Las Vegas Raiders. Even though they forced overtime, it was the Raiders who left AT&T Stadium with the 36-33 victory.
NFL・1 DAY AGO

With two losses in just five days, a lot of the luster has come off the Dallas Cowboys. But Cowboys owner Jerry Jones doesn’t plan on hitting the panic button anytime soon. In an interview with 105.3 The Fan on Friday, Jones lamented that his team couldn’t put enough pressure on Las Vegas Raiders quarterback Derek Carr yesterday. But he made it clear that the defense will improve and “the sky is not falling.”
NFL・1 DAY AGO
The Spun

The Dallas Cowboys’ defense has taken a major hit. Cowboys head coach Mike McCarthy announced on Thursday morning that star pass rusher Randy Gregory will be out for multiple weeks. Gregory, arguably the Cowboys’ best defensive player this season, suffered a calf strain at practice on Wednesday. He will reportedly...
NFL・16 DAYS AGO
The Spun

In Week 11, two of the league’s premier quarterbacks, Patrick Mahomes and Dak Prescott, will face off in a marquee matchup. Ahead of this weekend’s contest between the Kansas City Chiefs and Dallas Cowboys in Arrow Stadium, Mahomes shared his thoughts regarding the QB on the other sideline. “I mean...
NFL・9 DAYS AGO
ClutchPoints

Dallas Cowboys wide receiver CeeDee Lamb just doesn’t know why the NFL keeps fining him, and not for some meager amount of money. The issue took the spotlight once again after Aaron Rodgers was fined just $14,650 for violating the league’s COVID-19 protocols. Speaking to reporters on Wednesday, Lamb admitted...
NFL・16 DAYS AGO

FRISCO In more ways than one, Dak Prescott captained his Dallas Cowboys to Sunday’s 43-3 rout of the Atlanta Falcons. Michael Irvin would like his pal Dak to captain his Cowboys in one less way. “We don’t need that TD that bad bro!! @dak don’t do that s-t again!!!! WE...
NFL・12 DAYS AGO
New York Post

Just because Dak Prescott had no qualms about playing in all four quarters of Sunday’s loss to the Broncos doesn’t mean everyone was thrilled with the move. During Monday’s installment of ESPN’s “Get Up,” Rex Ryan ripped Cowboys coach Mike McCarthy over his decision to keep Prescott in the game and potentially risk further injury for the 28-year-old quarterback, who had been sidelined a week prior over calf issues.
NFL・18 DAYS AGO
Sports Illustrated

We’re midway through the 2021 NFL season and the true Super Bowl contenders are finally starting to establish themselves. For FOX Sports commentator Colin Cowherd, there’s a dream Super Bowl matchup that he wants to see. On his most recent podcast, Cowherd said he’s love to see the Dallas Cowboys...
NFL・7 DAYS AGO

Thursday Night Football on Thanksgiving produced a rather testy contest between the Dallas Cowboys and the Las Vegas Raiders. Two players were ejected from the game after getting in a scuffle on the sidelines that nearly caused an all-out brawl between the two sides. Cowboys CB Kelvin Joseph and Roderic...
NFL・1 DAY AGO
CBS Sports

The Detroit Lions fell to 0-9-1 on Sunday with their 13-10 loss to the Cleveland Browns. It was a close game, as the Lions scored 10 unanswered points in the second half to pull within reach of Baker Mayfield and Co. Their progress was hindered by an unsportsmanlike conduct penalty in between quarter breaks, however, that cost Detroit a chance at points.
NFL・4 DAYS AGO
AOL Corp

The Detroit Lions were hit with a weird unsportsmanlike conduct penalty between quarters at FirstEnergy Field on Sunday. As it turns out, it was because one of Dan Campbell’s players “said something about somebody’s mother.”. The Lions coach briefly explained why Detroit was given a 15-yard penalty between the third...
NFL・5 DAYS AGO
CowboyMaven

Titans Star A.J. Brown On Depression: 'I Thought About Taking My Own Life': NFL Tracker

FRISCO - The Dallas Cowboys continue to be newsmakers when it comes to roster-building. Updated by the minute, our Dallas Cowboys 2021 NFL Transaction Tracker: News and views on the roster-building effort. NOV 15 AJ BROWN TALKS MENTAL HEALTH It is a cause that Cowboys QB Dak Prescott has highlighted....
NFL・11 DAYS AGO
CowboyMaven

FRISCO - The Dallas Cowboys got through Thursday's workout here at The Star unscathed ... unless one counts prized rookie linebacker Micah Parsons taking a shot to the ... um ... mid-section. But he's OK, and ready to face the "Madden''-like QB in Patrick Mahomes. "I mean, this is a...
NFL・8 DAYS AGO
The Spun

The fact that the Dallas Cowboys lost to the Denver Broncos on Sunday isn’t really that shocking, but the manner in which they did is pretty stunning. Dallas was crushed by Denver, 30-16, in a game that wasn’t nearly as close as the final score would indicate. The Cowboys got down to the Broncos, 30-0, before scoring some points in garbage time.
NFL・19 DAYS AGO
FOX Sports

CLEVELAND (AP) — Browns rookie linebacker Jeremiah Owusu-Koramoah was activated from injured reserve on Saturday, giving Cleveland back a key defender for this weekend's game at New England. Owusu-Koramoah missed the past three games with a high ankle sprain, an injury that came as he was playing his best ball...
NFL・13 DAYS AGO
CowboyMaven

The Dallas Cowboys received some help at safety from the Penn State Nittany Lions in an ESPN.com 2022 NFL Mock Draft published on Tuesday. According to Jordan Reid, who wrote his first mock draft for 2022, the Cowboys would pick No. 28 and they would select Penn State safety Jaquan Brisker.
NFL・9 DAYS AGO