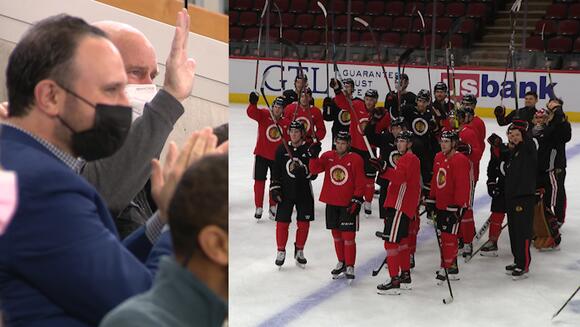 CHICAGO – Troy Murray is on the minds of Blackhawks fans and players alike as he continues his fight against cancer.

Murray was in the stands for the Hawks morning skate Thursday and Jonathan Toews made sure he knew the team was thinking of him, leading the troops in a salute to the long-time WGN Radio color analyst.

“It was pretty special,” noted Blackhawks defenseman Jake McCabe. “Toewser had a couple nice words for us on the ice and to be able to give him a salute, it’s a pretty special moment, for sure.”

“It’s unreal that he was able to make it out here today,” remarked Blackhawks forward Brandon Hagel. “It’s super special. I know a lot of guys – it was really special to them. Obviously, it hits hard for most of the guys here.”

Murray shared a hug with his broadcast partner John Wiedeman following the tribute. The two have been in the booth together since 2006.

Murray is continuing treatment following a diagnosis over the summer.

Blackhawks forward Jujhar Khaira stretchered off the ice after hit against Rangers; sent to hospital

CHICAGO — In their first game back from a three-game road trip out east, the United Center went quiet in the second period due to a frightening hit to a Blackhawks’ player. With 13:52 left in the second period of their game with the Rangers, forward Jujhar Khaira was knocked unconscious after a hit by […]
NHL・1 DAY AGO
WGN News

ELMONT, NY – There’s been no denying the Blackhawks’ prowess lately when they’ve gone to overtime or the shootout, but they were hoping that it wouldn’t have to be Sunday night. They entered the final minute of their game against the struggling Islanders on Sunday night with a 2-1 lead and Marc-Andre Fleury holding his […]
NHL・2 DAYS AGO
WGN News

CHICAGO – The team and fans might not have been as concerned about the result Tuesday night at the United Center as they were about one of the Blackhawks’ player. But after a scary hit suffered in the second period Tuesday night against the Rangers, the team had good news to report on forward Jujhar […]
NHL・22 HOURS AGO
NHL

PREGAME EVENT - PURPLE CARPET. The evening kicks off with Blackhawks' annual Purple Carpet event at 4 p.m. in the United Center Atrium. The Purple Carpet will honor fans who are currently battling cancer, in remission or walking in memory of a loved one who was lost to the disease, and the Blackhawks invite fans attending Sunday's game to come early to cheer on the honorees.
NHL・12 DAYS AGO

(The following is a guest post from Tessa Martyn, on a subject of personal importance to Blackhawks fans. Thank you to Tessa for sharing.) In August of 2021, former Chicago Blackhawks center and longtime radio color analyst, Troy Murray revealed that he was diagnosed with cancer. After hearing the news,...
NHL・2 DAYS AGO
CBS Philly

PHILADELPHIA (AP) — The Philadelphia Flyers fired coach Alain Vigneault on Monday following eight straight losses, two shy of matching a team record of 10 in a row, and with the franchise far from ending a 47-year Stanley Cup drought. The Flyers have been one of NHL’s biggest flops of the season. Their latest loss was a 7-1 defeat by Tampa Bay on Sunday night that sealed Vigneault’s fate. Assistant coach Michel Therrien also was fired. “Right now, we’ve lost our way,” Flyers general manager Chuck Fletcher said. The Philadelphia Flyers have relieved head coach Alain Vigneault and assistant coach Michel Therrien of...
NHL・2 DAYS AGO
The Hockey Writers

In today’s NHL rumors rundown, Montreal Canadiens owner Geoff Molson spoke with the media about the changes made to the management of the team. Meanwhile, the majority stake of the Pittsburgh Penguins has been officially sold to Fenway Sports. Jonathan Quick makes an odd comment while trying to defend Brendan Lemieux and the Ottawa Senators have four legitimate buy-out candidates. Finally, are the Carolina Hurricanes interested in trading for a pending UFA defenseman?
NHL・9 DAYS AGO
Sportsnaut

The Philadelphia Flyers haven’t been able to snap their losing run over the past week and with another trio of tough division games coming up, the team will be expected to find a win at all costs to move back up the league standings. Friday’s 6-3 home loss to the...
NHL・12 DAYS AGO
Sportsnaut

Last week, news broke that the Arizona Coyotes may be in search of a new home–yet again. While the team
NHL・2 DAYS AGO
WDIO-TV

Bulldogs stand in support of Stejskal during cancer battle

On Tuesday University of Minnesota Duluth (UMD) mens hockey sophomore goaltender Zach Stejskal revealed he's battling testicular cancer. During a press conference on Wednesday a few Bulldogs spoke in support of the Cohasset native now in chemotherapy. "Scary news when he told us a month or so ago," senior captain...
DULUTH, MN・14 DAYS AGO
NHL

Troy Murray said he wants to be back in the broadcast booth as soon as he can. The Chicago Blackhawks radio analyst was diagnosed with cancer on Aug. 9 and has had chemotherapy every other week since late summer. "I want to get back, but I need to get some...
HOCKEY・11 DAYS AGO

The Boston Bruins earned a one-sided win over the Buffalo Sabres on Wednesday, but it was a bit overshadowed by the late exit by star defenseman Charlie McAvoy. McAvoy left the game in the third period after Buffalo?s Zemgus Girgensons was called for a boarding penalty at 13:46. Girgensons was called for a five-minute boarding penalty and received a 10-minute game misconduct.
NHL・14 DAYS AGO
The Hockey Writers

This latest edition of the NHL Stat Corner covers the past two days (Friday/Saturday) since the NHL took a one-day break for American Thanksgiving. Scoring highlights this entry with lots more player and team stats and milestones from around the NHL. Ovechkin Goals Fuel the Capitals. Alex Ovechkin is tied...
NHL・10 DAYS AGO
WEEI Sports Radio

The relationship between Jake DeBrusk and the Boston Bruins has finally reached a tipping point, with the forward requesting a trade. The whole situation adds even more uncertainty for a team that already had plenty of question marks.
NHL・9 DAYS AGO
Sportsnaut

Now that the 2021-22 season is underway, it’s time for some updated NHL power rankings to get a sense of
NHL・1 DAY AGO
WGN News

CHICAGO – One of the most positive developments at the end of 2021 for fans of Chicago sports has been the Bulls’ return to relevancy in the NBA. With a number of offseason acquisitions, the Bulls are out to a 17-8 start to the season and find themselves near the top of the NBA standings. […]
CHICAGO, IL・1 DAY AGO
Denver7 News KMGH