By Ariana Brockington
The Hollywood Reporter
2021-10-21 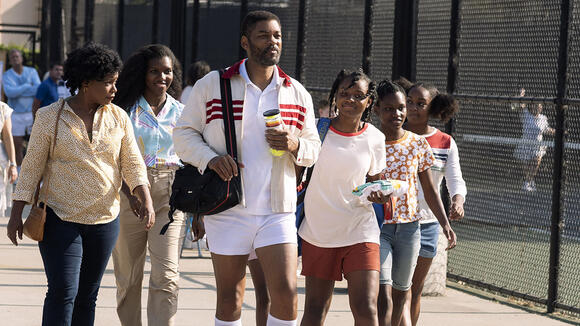 Will Smith leads the tennis biopic as the titular character, father and coach of tennis prodigies Venus and Serena Williams (portrayed by Saniyya Sidney and Demi Singleton, respectively) . The latest trailer includes scenes of Richard Williams trying to get tennis clubs to accept his daughters. Despite the obstacles they face, Richard tells his wife, Oracene “Brandi” Williams, played by Aunjanue Ellis, “ We’ve just got to stick to the plan. We’ve got champions in the other room.”

Richard continues to be challenged for the way he wants to manage his daughters’ careers and his unwavering support of their talent. Toward the end of the trailer, Venus faces an opponent she is expected to lose to while Beyoncé’s new song “Be Alive” plays in the background. The musician belts, “Ain’t nobody knock it, if they try. This is hustle personified./Look how we’ve been fighting to stay alive,” as Venus defies expectations.

The Williams sisters and Smith shared the new trailer and teaser of the song on Twitter. Before the clip began, Serena said, “Don’t miss out on it.” Added Venus, “What she said.”

King Richard will be released in theaters and on HBO Max on Nov. 19. The film premiered at the Telluride Film Festival last month and it will close AFI Fest with a screening at Hollywood’s TCL Chinese Theatre on Nov. 14.

In The Hollywood Reporter ’s Stephen Farber’s review of King Richard , he wrote, “ Smith does some of his best acting in these early scenes, which mix Richard’s frustration, simmering resentment, and genuine love for his family.”

Watch the new trailer below.

For King Richard star Jon Bernthal, athletics and acting go hand in hand. He even speaks in sports metaphors to Reinaldo “Rei” Green, who directed the actor in King Richard and on David Simon’s upcoming HBO miniseries, We Own This City. While Bernthal was a decorated athlete growing up, he had never really stepped foot onto a tennis court until he was cast as Rick Macci, one of the most successful tennis coaches in the sport’s history. So to believably play Venus and Serena Williams’ tennis coach, Bernthal dedicated himself to the game for three hours a day during the...
CELEBRITIES・3 DAYS AGO
The Hollywood Reporter

From ‘Being the Ricardos’ to ‘House of Gucci’: The Tricky Balance When Playing Real-Life People

Hollywood loves a biopic, and the Academy, in turn, has a history of honoring the actors brave enough to portray a beloved (or at times reviled) figure from recent history — in recent years, the acting prizes have gone to Daniel Kaluuya (Fred Hampton in this year’s Judas and the Black Messiah), Renée Zellweger (Judy Garland in 2019’s Judy), Rami Malek (Freddie Mercury in 2018’s Bohemian Rhapsody) and Olivia Colman (Queen Anne in 2018’s The Favourite). But the job of playing a real, recognizable person from recent history has its burdens. Nailing the look, mannerisms and voice of a public figure...
MOVIES・8 HOURS AGO
The Hollywood Reporter

Jurnee Smollett has landed the female lead in “The Burial,” a new courtroom drama from Amazon Studios. The “Lovecraft Country” actor will star opposite Jamie Foxx and Tommy Lee Jones in the Maggie Betts-directed project. Based on a true story, the film follows a bankrupt funeral home owner who decides to sue a rival businessman over a handshake deal gone wrong. The owner hires a flamboyant attorney (Foxx) to handle the case. Smollett will play Foxx’s opposing counsel, sources said. Betts is directing from a script written by Doug Wright. Producers on the film include Bobby Shriver via his Bobby Shriver Inc....
MOVIES・18 DAYS AGO

As a tennis player, was definitely looking forward to the “King Richard” movie about Richard Williams and his unorthodox ways to coach/create & market all time tennis greats daughters Venus & Serena Willams. This 2:24 PG-13 rated movie/documentary did not disappoint. I saw the the big screen but also currently available on HBA Max.
TENNIS・10 DAYS AGO
nationalblackguide.com

After a decades-long feud between Janet Hubert and her former The Fresh Prince of Bel-Air co-star Will Smith, she recently expressed her praises to Smith’s performance in the movie King Richard. In a video she posted on Twitter on Sunday, the 65-year old actress even admitted Smith’s new movie was...
TENNIS・5 DAYS AGO
Insider

'He's not the king of the world': Venus and Serena Williams' half-sister says 'King Richard' only tells 'half the story'

Sabrina Williams, 57, told The Sun that Richard Williams walked out on her family when she was 8 years old.
TENNIS・8 DAYS AGO
Daily Mail

Venus and Serena Williams signed off on Will Smith playing their father as they rave about the actor in new biopic King Richard: 'He's the real deal'

Venus and Serena Williams were heavily involved in the making of King Richard, and the cast list was no exception. The pair recently revealed that they signed off on Will Smith playing the role of their father in the biopic which is receiving rave reviews. 'There are so many special...
CELEBRITIES・2 DAYS AGO

“King Richard” is about the vision and the conviction of one man — Richard Williams (Will Smith) and his determination to turn his gifts daughters, Venus and Serena, into the world’s greatest tennis players. He started building their road to success along with his wife Brandi (Aunjanue Ellis) — even before their girls were born and he wrote down a 78-page manifesto, and according to the film credits at the end of the movie, most of these things have come true.
TENNIS・10 DAYS AGO
The Citizens Voice

Everyone knows of Venus and Serena Williams, the tennis greats who took the sport — and the world — by storm. The trailblazing sisters broke through a predominantly white sport to rise to the top and become role models for girls everywhere. Over the last two decades, Venus has won five Wimbledon titles and seven Grand Slam titles, and Serena has scored 23 Grand Slam titles.
TENNIS・14 DAYS AGO
ABC Action News

We speak with Layla Crawford who plays Will Smith's daughter in the new film "King Richard." Based on the true story that will inspire the world, King Richard follows the journey of Richard Williams (played by Will Smith), an undeterred father instrumental in raising his daughters to be extraordinarily gifted athletes including Lynn Price, played by Layla. Driven by a clear vision of their future, Richard has a plan that will take his daughters from the streets of Compton to the global stage as legendary icons. Layla’s performance as the older sister is real, raw, and true to the real woman she is today. With this role, the world will know who the real Lynn Price is through Layla's eyes.
MOVIES・14 DAYS AGO
thepeachreview.com

‘King Richard’ is a Motivational Masterpiece

Directed by Reinaldo Marcus Green, King Richard tells the story of Richard Williams, the father of tennis legends Venus and Serena Williams. It’s no secret that the Williams sisters are the best in their sport, but what might surprise audiences is that Richard Williams planned it all. Along with his clear vision and laser-sharp focus, he kept a 78-page plan that detailed how they would train and the path they would take to change the world of tennis.
TENNIS・6 DAYS AGO

‘King Richard’ is a royal success

Reinaldo Marcus Green’s “King Richard” is not some historic period piece about a British king. No, this is the biopic about Richard Williams, the strict and demanding yet loving and supportive father of tennis superstars Venus and Serena Williams. “King Richard” stars the versatile Will Smith in the title role of a man who expects much from his five daughters, as he tries desperately to shield them from the more harsh aspects of growing up in a ghetto neighborhood in Compton, Calif.
CARMEL, IN・6 DAYS AGO
Deadline

Aunjanue Ellis, who plays Venus and Serena Williams’ mother, Oracene, in King Richard, said her character deserves more credit, including from herself. The film tells the story of how the Williams sisters’ father, Richard Williams (Will Smith), designed a plan for their tennis success. Ellis spoke with Deadline’s Joe Utichi about her performance at Contenders New York on Saturday. “Before, I had a perception of her that I know so many people have that she was this doting mother in the stands who was always there cheering her daughters on,” Ellis said. “She wore these glasses. She was a woman of mystery...
TENNIS・2 DAYS AGO
ABC News

When Beyoncé drops new Adidas x Ivy Park collections, there's a good chance they are going to be epic. The multi-hyphenate superstar's latest "Halls of Ivy" campaign, to be released online for just 24 hours on Dec. 9, includes a mix of familiar young faces, including Kobe Bryant's daughter Natalia.
CELEBRITIES・5 DAYS AGO
The Hollywood Reporter

Don’t call it a comeback, because Freddie Prinze Jr. has been here for years. However, there’s something new on his resume that hasn’t been there since the aughts. Last month, Netflix confirmed that Prinze Jr. would star opposite Aimee Garcia for director Gabriela Tagliavini in an as-yet-untitled project, marking his return to a top billed acting role, and in a holiday romantic comedy at that. When news broke, fans went wild because it had been years since Prinze Jr. signed on for such a starry role after building an impressive resume early in his career with I Know What You Did...
MOVIES・3 DAYS AGO
undertheradarmag.com

British artist Richard Dawson and Finnish experimental rock band Circle have shared a new song, “Cooksonia,” named after the first land-based vascular plant. It is the latest release from their forthcoming studio album, Henki, which will be out this Friday (Nov. 26) via Domino. Listen below. Previously released songs from...
MUSIC・12 DAYS AGO
The Hollywood Reporter

The Matrix Resurrections dropped a new trailer Monday, and fans can find comfort in knowing the fourth film in the beloved franchise will have plenty of kung fu, bullet time and iconic fight scenes. “We can’t see it, but we’re all trapped in these weird, repeating loops,” says a voiceover at the top of the preview. The nearly three-minute trailer gives audiences a more in-depth look at the upcoming sequel, which features the return of franchise veterans Keanu Reeves, Carrie-Anne Moss and Jada Pinkett Smith, as well as newcomers Yahya Abdul-Mateen II, Neil Patrick Harris, Jessica Henwick, Jonathan Groff, Priyanka Chopra Jonas...
MOVIES・3 HOURS AGO