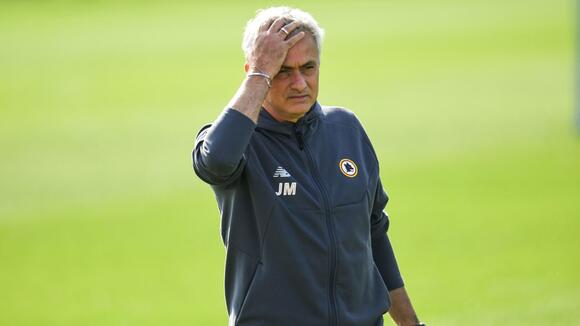 José Mourinho's side was delivered a thrashing for the ages by its Norwegian counterpart.

North of the Arctic Circle, things went south quite drastically for José Mourinho's AS Roma.

The Serie A side was delivered a humbling 6–1 defeat by Norwegian power Bodø/Glimt in the UEFA Europa Conference League on Thursday. It marked the first time a Mourinho-coached side had ever conceded six or more goals, according to Opta , and it came on the day that U.S. right back Bryan Reynolds was making his first start of the season in any competition for the club.

Reynolds was part of a second-choice Roma lineup that became more of a first-choice unit in the second half, with the likes of Henrikh Mkhitaryan, Bryan Cristante, Lorenzo Pellegrini and Tammy Abraham entering with Roma still in striking distance.

It was after that point that Bodø/Glimt put the group match out of reach, though, scoring in the 71st, 78th and 80th minutes to cap the humiliation.

The rout took the limelight off an embarrassment for Mourinho's previous team, with Tottenham losing 1–0 to Dutch side Vitesse on a bizarre day in Europe's third-tier continental competition.

Coming off this and last weekend's league loss to Juventus, things might get worse before they get better for Roma. The capital club hosts first-place and still-perfect Napoli (8-0-0) in its return to Serie A on Sunday.

The upcoming winter will see Roma improving their attacking department. According to the football transfer rumours in Italian media, Roma are tipped to sign Bodo/Glimt striker Erik Botheim. The 21-year-old has been subject to interest from various European clubs. The Norway international joined Bodo/Glimt from Rosenborg on a free transfer...
UEFA・12 DAYS AGO
The Guardian

Argentina celebrates Maradona one year after his death

Argentina is marking the one-year anniversary of the death of soccer legend Diego Maradona with ceremonies, tributes, graffiti murals and emotional messages on social media
SAN DIEGO, CA・1 DAY AGO
The Independent

What the papers sayManchester United pair Anthony Martial and Donny Van De Beek have stepped down their plans to leave Old Trafford following the dismissal of Ole Gunnar Solskjaer, reports the Daily Mail. One name that is still linked with a move away from the club is Jesse Lingard, regardless of who takes the hot seat at the club.Christian Pulisic‘s future at Chelsea is increasingly uncertain, the Daily Express says, as Liverpool look to bolster their attack. Pulisic is said to be increasingly unsure over his role under Thomas Tuchel and the Merseyside giants could see him as a solution...
PREMIER LEAGUE・2 DAYS AGO

From starting with a 5-1 thrashing of Cardiff and that night in Paris, to losing the Europa League final and humiliating defeats this season... the highs and lows of Ole Gunnar Solskjaer's Manchester United tenure

Ole Gunnar Solskjaer's spell as Manchester United manager came to an end on Sunday off the back of a 4-1 defeat to Watford. After initially taking over as interim boss in December 2018, Solskjaer was in charge of United for almost three years and oversaw some memorable matches both in a positive and negative sense.
PREMIER LEAGUE・4 DAYS AGO
firstsportz.com

From a bronze statue unveiled in Naples to humble offerings of flowers at his childhood home in a Buenos Aires slum, people around the world mourned the death one year ago Thursday of football great Diego Maradona. Outside his humble childhood home, bouquets of flowers and messages piled up -- one reading: "You gave us heaven."
SOCCER・1 DAY AGO
newschain

David Moyes celebrated a job well done after West Ham waltzed into the last 16 of the Europa League with a game to spare by beating Rapid Vienna 2-0. First-half goals from Andriy Yarmolenko and Mark Noble in Austria wrapped up top spot in Group H for Moyes’ side. The...
SOCCER・1 DAY AGO

A last-gasp penalty by Yaroslav Rakitskiy earned 10-man Zenit St Petersburg a 1-1 draw at Malmo FF in their Champions League Group H clash on Tuesday, ensuring that the Russians will play in the Europa League in the New Year. Danish midfielder Soren Rieks netted Malmo's first goal of the...
UEFA・3 DAYS AGO
SPORTbible

Four Tottenham players have been branded a "disgrace" in the aftermath of the side's 2-1 Europa League loss to NS Mura, with one pundit even suggesting that the quartet should never play for the club again. It was a thoroughly embarrassing evening for Antonio Conte's side, who conceded the second...
PREMIER LEAGUE・12 HOURS AGO
Reuters

BRUGGE, Belgium (AP) — Club Brugge has endured a humiliation at home in the Champions League. It slumped to a 5-0 loss to Leipzig that ended the Belgian champion’s hopes of progressing to the knockout stage. Leipzig’s biggest European win lifted the German side to third place in Group A. It’s level on four points with last-place Brugge. Both teams can’t finish in the top two and can only hope for a spot in the Europa League. Manchester City beat PSG 2-1 to win the group, with the French team guaranteed second place.
UEFA・2 DAYS AGO

The Europa League and Europa Conference League have reached their next-to-last group games. In the Europa League, Lyon has already reached the last 16 and could be joined by the likes of West Ham, Monaco and Eintracht Frankfurt. In the Conference League, no teams have yet sealed a place in the last 16 of the inaugural competition but Dutch teams AZ Alkmaar and Feyenoord are among those who could change that. Renowned coaches Antonio Conte and Jose Mourinho are at Tottenham and Roma this season and both likely need wins to stay in contention to qualify automatically as group winners.
UEFA・2 DAYS AGO
90min.com

Tottenham's fringe players could get the opportunity to impress in their Europa Conference League clash at NS Mura on Thursday. Spurs are currently second in Group G and can book a spot in the preliminary knockout stage if they win and Rennes beat Vitesse. Here's the team Antonio Conte could...
PREMIER LEAGUE・2 DAYS AGO
Sporting News

'I'll give you a freebie' - Postecoglou continues to torment journalists ahead of Celtic's Europa League clash vs. Leverkusen

Celtic boss Ange Postecoglou's running battles with journalists has been hilarious to watch during his first season in Scotland. The Australian accused reporters of being 'condescending' prior to the Bhoys' first Europa League clash against Leverkusen last month. Postecoglou also took issue with a journalist describing Celtic's exit from UEFA...
UEFA・1 DAY AGO
The Independent

Tottenham head into their fifth Europa Conference League game sitting in second place in Group G, three points behind table-toppers Rennes.And with Vitesse just one point behind Antonio Conte’s side, Spurs know anything but a win could leave them in danger of suffering an embarrassing group-stage exit.Harry Kane netted a hat-trick in their 5-1 win over Mura at the Tottenham Hotspur Stadium two months ago, so he could well see this as another opportunity to fill his boots.But other than Kane, Conte is expected to take a look at members of his squad who have not yet received many...
PREMIER LEAGUE・1 DAY AGO
punditarena.com

Erling Haaland “loves” Premier League club. Erling Haaland moving to the Premier League is something a lot of football fans would like to see and there are sure to be plenty of suitors if the striker does decide to return to the country of his birth. The Borussia Dortmund man...
PREMIER LEAGUE・1 DAY AGO
newschain

Celtic’s hopes of progressing in the Europa League were dashed in agonising fashion as a late fightback from Bayer Leverkusen denied them a famous victory in Germany. Ange Postecoglou’s spirited side knew they would probably require a win to keep their last-32 dream alive and they were on course for this outcome until the closing stages after a Josip Juranovic penalty and a strike from Jota cancelled out Robert Andrich’s early goal for the hosts.
UEFA・1 DAY AGO