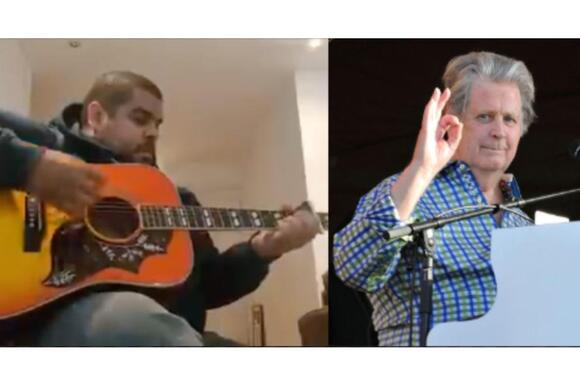 Adam Barrett has been steadily building a fan base on YouTube with his acoustic guitar covers of iconic songs from musicians and bands like The Beatles, The Cure and Oasis.

Last year, Barrett uploaded a cover of The Beach Boys song "God Only Knows," from their iconic "Pet Sounds" album. It's a song so good that Paul McCartney once called it the "greatest song ever written" and has repeatedly praised it over the years , including in 2007 when he performed the song live with Wilson.

Barrett's cover honors the spiritual and emotional feel of the original while adding his own unique touch by challenging the soulful harmonies into his own singular sound. The cover is so good that Wilson himself shared it on his Twitter account, adding: "How about this!"

And if you know anything about the famously reclusive Brian Wilson, that seemingly minor comment is high praise indeed.

With around 38,000 views, Barrett's video is still a bit of an undiscovered gem for most folks. And his talents continue to generate a hugely positive and emotional response from folks experiencing it for the first time:

Barrett's videos are a great example of how platforms like YouTube can be used to elevate and share the creative talents of people who might otherwise go unnoticed. His covers are introducing him to a new audience that also gets the chance to check out some of Barrett's original songs along the way. And if you're a fan of the Beach Boys, or any of the other songs Barrett covers, it's a wonderful new way to experience the music you already love.

By now, the origins of the Beatles classic “Yesterday” are the stuff of legend: the melody famously came to Paul McCartney in a dream, and he used dummy lyrics and the placeholder title “Scrambled Eggs” for it until he got the words right. But McCartney’s new book The Lyrics: 1956 to the Present (out Nov. 2) delves deeper into the story behind the hit song, and the former Beatle recently shared an excerpt from the book on a radio broadcast explaining why the song is essentially a solo track.
MUSIC・29 DAYS AGO
loudersound.com

Eric Clapton doubles down on his anti-vaxxer stance in a podcast appearance, while blaming a bad Rolling Stone review for the demise of legendary late-60s rockers Cream. It seems a quiet and dignified retirement isn't on the cards for Eric Clapton, as the guitarist recently appeared on The Defender, a podcast hosted by vocal anti-vaccine campaigner Robert F. Kennedy, Jr. (Yes, he is a relation.)
MUSIC・11 DAYS AGO
94.3 Jack FM

So, The Beatles are the greatest band of all time, right? Not if you ask Paul McCartney. Sir Paul himself feels that The Everly Brothers deserve the honor. British newspaper the Daily Mail reports that, according to a passage in his new book ﻿The Lyrics, the former Beatle says he and band mate John Lennon were plenty inspired by the pioneering American rock ‘n’ roll duo.
MUSIC・22 DAYS AGO
American Songwriter

Behind the Song: “Hey Jude” by John Lennon and Paul McCartney

The Lennon-McCartney songwriting partnership is one of the most successful music collaborations in the industry, if not the most successful. Certainly well known and internationally acclaimed, John Lennon and Paul McCartney are jointly accredited for creating the majority of the Beatles’ beloved discography with about 180 published songs under their names. One song to emerge from the prolific Lennon-McCartney alliance is the hit single, “Hey Jude.”
MUSIC・28 DAYS AGO

Brian Wilson's story is one of both unparalleled creativity and undoubted resilience. Beyond the catchy bops of the Beach Boys earliest years — "Fun, Fun, Fun," "Surfin' USA," "I Get Around"— it was clear that Wilson was chasing a different kind of sound: a harmonically complex and uniquely layered one that utilized orchestral instruments and studio techniques in ways no artist had done before. It was 1966's Pet Sounds, Wilson's most acclaimed piece of work, that the Beatles later cited as the inspiration for Sgt. Pepper.
MOVIES・12 DAYS AGO
The Independent

The 15 worst albums by classic bands, from Led Zeppelin to Queen

Rock’n’roll musicians have a habit of thinking of themselves like secular gods, but the truth is they’re not infallible. No matter how successful a band may or may not have been in the past, there’s never any guarantee their next record will live up to the heights they’ve previously scaled. Sometimes, everything that once went right just all goes wrong.There are often extenuating circumstances, of course. Band members may leave due to death, drugs or just good old-fashioned “musical differences”, or an ambitious new direction may turn out to be more like a swerve into oncoming traffic.Whatever the cause, the...
MUSIC・19 DAYS AGO
rock107.com

Chicago and Beach Boys co-founder Brian Wilson have unveiled plans for a 2022 U.S. co-headlining tour that will take place during the late spring and summer. The 25-date trek will kick off on June 7 in Phoenix and is mapped out through a July 26 concert in the Detroit suburb of Clarkston, Michigan.
MUSIC・14 HOURS AGO

It was a sad day in rock history in 2001, but an exciting one for Metallica in 1982.
MUSIC・1 DAY AGO
rockcellarmagazine.com

Brent Wilson (no relation to Brian Wilson) is a Kentucky-born and bred director/writer/producer who specializes in music-themed documentaries. It should come as no surprise that a filmmaker hails from the Bluegrass State – after all, motion picture pioneer D.W. Griffith, “the man who invented Hollywood,” is from there, and the University Press of Kentucky is one of America’s top publishers of movie biographies.
MOVIES・13 DAYS AGO
foreveraltoona.com

The Beach Boys' latest box set, Feel Flows: The Sunflower & Surf’s Up Sessions 1969-1971, has been named the prestigious 2021 “Reissue Of The Year” by England's Mojo magazine. Coming in at Number Two was Can's Live In Stuttgart 1975, with Neil Young's Archives Vol. II (1972-1976) rounding out the Top Three.
ENTERTAINMENT・14 DAYS AGO

The most telling moment in Brian Wilson: Long Promised Road is when the Beach Boys co-founder Brian Wilson asks his longtime friend, Rolling Stone editor Jason Fine, what he does when he’s scared. The de facto interviewer and guide through the musician’s documentary responds by asking Brian what scares him, and Wilson says “What a Fool Believes” by the Doobie Brothers. The songwriting legend has always had one wary eye on the competition. It’s been an education, and he’s learned so much it’s scared him.
MUSIC・12 DAYS AGO
InsideHook

Roughly a third of the way through director Brent Wilson’s new documentary, Brian Wilson: Long Promised Road, veteran producer Don Was sits in front of a studio console listening to The Beach Boys’ “God Only Knows.” Was, who has spent decades working with the likes of The Rolling Stones, Bob Dylan, Willie Nelson and Elton John, is captured pressing a sequence of buttons as the iconic song plays through the speakers, cutting layers away until nothing remains except the vocal harmonies of the track’s unforgettable cyclical coda. Taking it in revered silence, Was leans forward, braces his head with his hand, then looks up at the camera with a smile of disbelief and says, “I don’t even know where to begin.”
CELEBRITIES・13 DAYS AGO
Vogue

A year or two ago, a friend and former colleague of mine, Jason Fine, began posting a casual Instagram pic now and again of himself with the legendary Brian Wilson of the Beach Boys. This, in itself, wasn’t really surprising – Fine was the managing editor of Rolling Stone, where he had worked for decades, and he’d interviewed Wilson a bunch of times. But these pictures were different – the two weren’t sitting down for a formal interview, and they weren’t “Hey, look who I’m with!” fan grabs, but rather snapshots from the road, of the pair cruising around Los Angeles, stopping off at diners… you know: They were friends. The entire concept seemed otherworldly to me – instead of Comedians in Cars Getting Coffee, this was Legend Who Wrote Pet Sounds in Cars With My Friend.
MOVIES・10 DAYS AGO
Upworthy

This Māori group's kapa haka performance of Bohemian Rhapsody will make your day.

Queen's Bohemian Rhapsody has been covered dozens of different ways. But you've never seen it performed like this. As one of the most iconic songs in rock music, Bohemian Rhapsody is recognizable no matter how it's done. As children, my brother and I used to belt out Galileos and Figaros in the backseat of our parents' Volkswagon whenever the song came on (yes, just like in Wayne's World). While other kids learned about Beelzebub in Sunday School, I learned about him from Queen's perfect harmonies. If there were an anthem from my classic rock-filled childhood, it would be Bohemian Rhapsody.
MUSIC・4 DAYS AGO
Kiss 103.1 FM

Have you ever heard a song that made you so emotional because with every word and melody of that particular song, you felt deep in your heart it was about you? Killeen native Jershika Maple has done it again. Not only was I just memorized by Jershika's performance Monday night, but the judges were as well.
KILLEEN, TX・14 DAYS AGO
Whiskey Riff

Shane Smith & The Saints have put together a heck of a career for themselves despite seeming to still be pretty under the radar. Since their Debut Album in 2013, Coast, they’ve been in what I call the “John Prine Category” – meaning they’re probably a favorite of your favorite artist, even if you’re not familiar with their work. I’m still going back and listening to albums and songs I’d never heard and honestly should have made this a point of emphasis […] The post Shane Smith & The Saints Release Live Acoustic Cover Of “Pancho & Lefty” And Shocker, It’s Awesome first appeared on Whiskey Riff.
MUSIC・11 DAYS AGO
JamBase

Acoustic Syndicate recorded a cover of The Velvet Underground’s “Rock And Roll” for their latest Organic Records single. JamBase is pleased to premiere the North Carolina-based quartet’s version ahead of its official release tomorrow (Friday, November 19). The Velvet Underground originally issued “Rock And Roll” on their iconic 1970 studio...
MUSIC・12 DAYS AGO
udiscovermusic.com

Brian Wilson has released the new song “Right Where I Belong,” taken from the soundtrack of the new documentary Brian Wilson: Long Promised Road, and featuring and co-written with My Morning Jacket’s Jim James. The full soundtrack is released on Friday (26). The song, in which Wilson reflects on his...
MUSIC・6 DAYS AGO