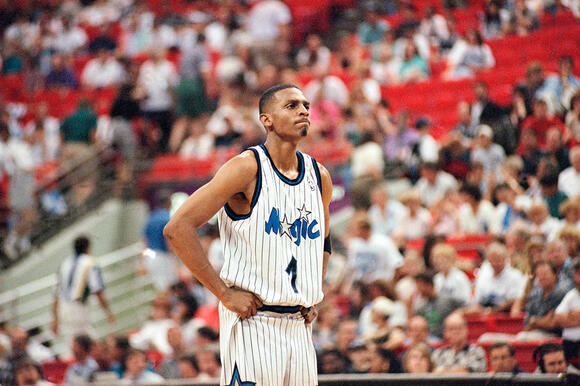 Given its far-out drop date, images of the forthcoming releases have yet to surface but the sneaker leak social media accounts confirmed on the caption that the shoe will return in the “White/Varsity Royal/Black” and “Black/Varsity Royal/White” colorways, which match up with the shoe’s iconic “Home” and “Orlando” makeups.

The aforementioned account also shared images of the previous Air Max Penny 1s’ releases including the ’96 version of the “Home” colorway and the “Orlando” drop from ’11. The looks for both styles draw inspiration from the Orlando Magics team colors and uniforms, which was the team Hardaway played for during the peak of his NBA career.

The first shoe sports a white-based leather upper combined with a pinstripe design on the tongue and royal blue accents on the Swoosh branding and “1 Cent” logo on the heel. The latter pair features a two-tone black and white leather upper including the aforementioned pinstripe details on the tongue and blue hits decorating the logos. Completing the look are Air Max-cushioned midsoles and rubber outsoles.

Although the early info was revealed on Instagram, the return of the Air Max Penny 1 has yet to be confirmed by Nike Basketball.

In related Nike news, here are all the best Nike deals you need to know about during Black Friday.

There’s a new iteration of Kanye West’s acclaimed Adidas Yeezy Boost 350 V2 shoe coming soon. According to @YeezyMafia, the “Dazzling Blue” iteration of the popular running-inspired lifestyle shoe will hit stores in spring 2022. Although images of the style have yet to surface, the Yeezy insider shared several mockup photos on Instagram to give fans an idea of what to expect next year. The shoe is expected to don a predominantly black color scheme on the breathable Primeknit upper that’s combined with a royal blue stripe on the lateral side that features the text “SPLY-350.” Adding to the stealthy execution are...
APPAREL・4 DAYS AGO
Footwear News

Spike Lee made a bold style statement while sitting courtside at a basketball game this week. While attending a New York Knicks basketball game between the Brooklyn Nets and the New York Knicks, the “Do The Right Thing” director shone in a neon pink double-breasted suit and buttoned white shirt by Louis Vuitton. Designed by the late Virgil Abloh, the ensemble was there very same outfit Lee wore to the 2021 Cannes Film Festival.The colorful set was paired with his signature fedora, a black and gold watch, round orange glasses and a stack of colorful bracelets. The star also carried a brown...
DESIGNERS & COLLECTIONS・5 DAYS AGO
Footwear News

Puma and Mattel’s Master of the Universe: Revelation have joined forces on a limited-edition collaboration. The collection, released Nov. 30 exclusively at Footlocker.com for $150 each, features a fresh take on two classic Puma styles: the Suede and Clyde. Each style is inspired by the show’s characters and features authentic Masters of the Universe: Revelation graphics along with unique elements, including a collector’s edition box. “I’m not fit to walk a mile in He-Man’s shoes – but thanks to the good folks at Puma, now I can,” said Masters of the Universe’s executive producer Kevin Smith. “So I’ll be rocking those, as...
BEAUTY & FASHION・3 DAYS AGO
sneakernews.com

Nike makes it very clear how much they love their Swoosh. And with this upcoming Air Force 1, the brand somehow makes that even more apparent, as they layer not the paneling but the logo itself. The additions are rather few in number. Much of the construction seems to mimic...
AEROSPACE & DEFENSE・21 DAYS AGO

Just in time for the cold and rainy season, Jordan Brand is releasing the Air Jordan 1 Acclimate in a new “Light Chocolate” palette. The hiking-inspired colorway follows the silhouette’s “Triple Black” debut and comes dipped in a mixture of “Brown Basalt,” “Light Chocolate,” “Oatmeal” and black hues. The Acclimate...
AEROSPACE & DEFENSE・14 DAYS AGO
sneakernews.com

As the Swoosh readies itself for blockbuster anniversaries of some of its most iconic silhouettes from the 1980s, it’s quietly celebrating pairs that launched in the following decade. Among the options birthed out of the ’90s is the Nike Air Speed Turf Max, which is set to return throughout 2022.
NFL・12 DAYS AGO
The Oregonian

Shaquille O’Neal explains why he rejected Nike shoe endorsement: ‘I wasn’t interested in being another guy on the shelf’

Before he started appearing on every TV commercial in your home, Shaquille O’Neal was an extremely successful star in the NBA. Arguably one of the greatest centers of all-time, in fact. The endorsements rained in for O’Neal during and following his playing career, including a shoe deal. O’Neal was a...
NBA・5 DAYS AGO
hypebeast.com

Familia‘s highly anticipated Dunk Low Pro SB “First Ave” has officially received a release date. The Minneapolis-based skate shop’s new release will be the final Nike Dunk to be released in 2021, closing out a massively popular year for the silhouette. The pairs were first teased in June earlier this year but were rumored to have received a cease and desist order for reasons that are still unknown.
APPAREL・1 DAY AGO

Nike Golf Deals - Boost Your Wardrobe With These Caps, Polos, Shoes And Trousers

Nike is arguably the biggest sporting brand in the world, with a whole host of sporting megastars like Michael Jordan, Rafael Nadal and Tiger Woods sponsored by the global company. Despite still making equipment for sports like tennis, basketball and football, Nike actually pulled out of the golf equipment industry...
APPAREL・11 DAYS AGO
inputmag.com

Nike’s hand-free Go FlyEase has been the crown jewel in its years-long efforts to make more accessible sneakers for the disabled community, with Time hailing it as one of the best inventions of 2021. But the biggest giant in all of sneakers and sportswear hasn’t operated alone in innovating for...
APPAREL・13 DAYS AGO
GQMagazine

Back in January of last year, during Paris Fashion Week, Alyx designer Matthew Williams teased a luxurious riff on a pair of Nike sneakers: the iconic Air Force 1. He took the beloved streetwear silhouette and did just enough, adding his signature anodized buckle alongside some glossy metallic text. Since then, the Swoosh and Alyx have released various colors in the slow, staggered manner that has become standard for in-demand and limited-edition kicks. That has amounted to eight colorways of the collaboration in total, of which you'd have been lucky to score a single one. But this week, Nike and Williams are dropping the complete series in one swoop.
NEW YORK CITY, NY・12 DAYS AGO
inputmag.com

Nike's hands-free Go FlyEase sneaker is coming back in a fresh, new color

Nike’s innovative Go FlyEase sneaker is set to re-release for only the second time ever. The completely hands-free sneaker, intended for use by people with disabilities, was an instant object of fascination upon its debut in February. But because hype was so high for the sneaker across the board, the very people it was designed for were largely shut out of the release as resellers commanded more than $500 for the sold-out shoe.
RETAIL・14 DAYS AGO
golfmonthly.com

Nike Men's Roshe G Golf... Nike Roshe G Tour Golf Shoes... The Nike Roshe Run trainer is one of the most iconic sneakers ever. It led the way in minimalism and they were designed by Dylan Raasch, more as a personal project rather than any Nike-driven initiative. They were released in 2012 and they were inspired by Zen ideology and simplicity. And they were, better still, incredible value at just $70.
APPAREL・13 DAYS AGO
sneakernews.com

Having released originally in 1995 and Retro’d last in 2011, the Nike Air Max Penny 1 “Orlando” is long overdue for a re-release. Thankfully, we won’t have to wait much longer as the colorway is slated to return next year affixed with all its beloved details. As such, the pair...
ORLANDO, FL・10 DAYS AGO
Cyclingnews

Nike is the go-to retailer across so many sports, but has been absent from mainstream cycling in recent years. That changed, however, with the SuperRep Cycle, a new indoor cycling shoe from the American giant. If you were thinking of getting some new shoes specifically for your time spinning or on the turbo, then you should look out for the SuperRep Cycle shoes among the Black Friday cycling shoe deals. They are already discounted, but Nike members can get a further 25% off at checkout in the UK, and in the US you can get 20% off the discounted shoes.
SHOPPING・9 DAYS AGO
Business Insider

Rejoice, the day has come! Nike has been holding off its Black Friday sale until the very last second and to be fair, we don't blame them. Nike is by far the most popular sports brand in the world, it can do whatever it wants to do. That said, we're glad it decided to delight us with some Black Friday running shoe deals as it wouldn't have been the same without Nike playing ball.
SHOPPING・10 DAYS AGO
SneakerFiles

Nike Sportswear will release a special Nike Dunk Low ‘Barber Shop’ that will launch during the early part of 2022. This Nike Dunk Low features Black tumbled leather across the upper while Light Blue accents the inside of the tongue, Swoosh, and rubber outsole. One of the highlights on this shoe is the Red, Blue, and White pipping that resembles barbershop poles. The pair also features mismatched lace tips, Red branding on the tongue and heels, and a clip blade as a lace jewel. Some of the other details include a graphic hair design on the heel, White on the midsole, and scissor graphics on the bottom to finish the look.
APPAREL・13 DAYS AGO
firstsportz.com

Shaquille O’Neal is undoubted one of the best centers that will go down in NBA History. His presence was enough to intimidate his opponents. Well, with a built like that who wouldn’t be? Shaq was drafted in 1992 and since then he has been breaking screens (you know the Shaq dunks).
NBA・4 DAYS AGO
sneakernews.com

Trae Young’s new adidas signature shoe kicked off with some impressive Atlanta-themed concepts, bridging connections between himself and the Atlanta institution So So Def as well as the ICEE brand cold treats. More recently, we saw a festive Christmas edition that the Hawks backcourt standout will likely lace up on the 25th against the revived rival Knicks. Today, adidas brings us back home with this sure-fire Hawks colorway that sees the signature hues fiercely applied to this popular hoops shoe.
BEAUTY & FASHION・5 DAYS AGO