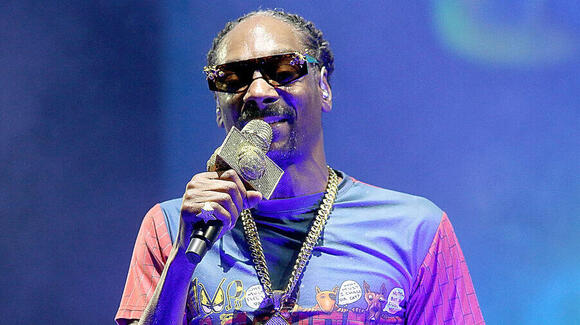 Snoop Dogg is officially a member of the 50 club .

On Thursday, the hip hop legend celebrated his 50th trip around the sun with a star-studded bash in his hometown of Los Angeles. Snoop's 300-person party included a slew of his celebrity friends . Stars Jamie Foxx , Nelly , Usher , Nas and T.I. were all in attendance at the "Gin & Juice" rapper's "Playas Ball" themed birthday bash.

Comedian Mike Epps was also in attendance at the old school party. Snoop took to Instagram to acknowledge the funnyman for sticking to the "playas" theme of the birthday bash. He wrote:

"Best hair of the night went to. @therealmikeepps Come bac and collect ya award Pimp."

The birthday boy himself rocked a full tuxedo, top hat and fur coat to his shindig, truly sticking to the old school concept. Adding more fuel to the nostalgic fire, the West Coast icon received a shiny, fully restored 1955 Chevy Impala as birthday gift, as well as a customized Mercury Cougar, decked out in the Lakers' infamous purple and gold colors; with images of LeBron James and Kobe Bryant spray painted on the side for the Long Beach legend.

Snoop's other pal, and co-host of Martha & Snoop's Potluck Party Challenge, Martha Stewart couldn't make it to the big event, however, she wished the "Drop It Like It's Hot" rapper a happy 50th birthday via Instagram. Fully equipped with a bday cake, Martha shared:

Snoop's birthday celebration comes just weeks after it was announced that the hip hop icon would be joining Dr. Dre , Kendrick Lamar , Mary J. Blige and Eminem on stage for the 2022 NFL Halftime Show .

Marvel’s Hawkeye finally premiered on Disney+ this week with its first two episodes, and while it is exciting to see Jeremy Renner return as the title character and Hailee Steinfeld’s Kate Bishop being introduced, the only thing anyone has been talking about is how cute Lucky the Pizza Dog is. To make the premiere of the show that much more special it just so happened to be Lucky actor Jolt the Golden Retriever's fourth birthday, and the dog took to Instagram to mark the occasion.
PETS・12 DAYS AGO
WHAS 11

John Travolta's little boy just turned 11. The actor took to social media to wish his "beautiful boy," Ben, a happy birthday. In the snap, shared on Tuesday, John is seen with his son and daughter Ella. "Happy birthday my beautiful boy. Your dad adores you!" the Saturday Night Fever...
CELEBRITIES・12 DAYS AGO
Primetimer

Christina Applegate celebrates her 50th birthday as she deals with MS

"Yup. I turned 50 today," Applegate tweeted on Thanksgiving Day. "And I have MS. It’s been a hard one. Sending so much love to all of you this day. Many are hurting today, and I am thinking of you. May we find that strength to lift our heads up. Mine currently is on my pillow. But I try."
CELEBRITIES・8 DAYS AGO
ETOnline.com

Nick Cannon is mourning an unimaginable loss. The 41-year-old TV personality announced Tuesday on The Nick Cannon Show that his youngest son, 5-month-old Zen, died of brain cancer and a subsequent tumor. Cannon and Alyssa Scott welcomed Zen back in June, making him Cannon's seventh child. On his show, Cannon...
CANCER・4 HOURS AGO

Photos of two gunmen suspected of ambushing and killing rapper Young Dolph as he was buying cookies at a Memphis store on Wednesday have emerged.The 36-year-old artist, real name Adolph Robert Thornton, Jr, was inside Makeda’s Homemade Butter Cookies when two men drove up and fire multiple rounds into the store through a window.Law enforcement confirmed photos of the two suspected shooters, which had been circulating online, were authentic, Fox13 reporter Jeremy Pierre said.In one of the images, Dolph’s camouflage-colored Lamborghini could be seen parked outside of the shop.Music stars Megan Thee Stallion and Chance the Rapper led tributes...
PUBLIC SAFETY・19 DAYS AGO
thebrag.com

Megan Thee Stallion has dropped out of the 2021 American Music Awards and won’t be performing alongside BTS anymore. The rapper shared the news on social media, revealing she had to drop out due to “an unexpected personal matter.”. “I’m so sad! I really can’t wait to hit the stage...
CELEBRITIES・15 DAYS AGO
Essence

The Wopsters went all out to celebrate Keyshia's youngest daughter, Dior. Keyshia Ka’oir’s daughter just turned 16, and to celebrate, the ‘Wopsters’ went all out. The teen marked her Sweet Sixteen with a birthday party in Atlanta over the weekend (Dec. 4). She wore a gorgeous red ball gown, standing out in the color as her family wore black.
CELEBRITIES・1 DAY AGO
Us Weekly

Happy-go-lucky! Meghan Markle and Prince Harry’s 6-month-old daughter, Lili, already has an adorable personality. “She’s such a sweet-natured baby and a real joy to be around,” a source exclusively tells Us Weekly. “They’re keeping a note of all her new exciting milestones. It’s amazing how quickly she’s growing.”. The insider...
CELEBRITIES・3 HOURS AGO

Serena Williams, 40, Shows Off Her Totally Toned Abs On IG While Wearing In A Crop Top At Art Basel Miami

Serena Williams was having a blast of a weekend in Florida while attending Art Basel Miami. The 40-year-old tennis GOAT just dropped a photo of herself rocking a chic crop top on IG. And can I just say, Hello abs!. Serena eats a mostly plant-based diet to stay in shape....
MIAMI, FL・5 HOURS AGO
shefinds

Tom Cruise's Transformation Continues To Stun Us All

The internet is still so confused about what has happened to Tom Cruise’s face over the past few months – and it doesn’t look like we are any closer to getting the answers we are so desperately longing for!. Concerns about the 59-year-old Top Gun star’s appearance first started when...
CELEBRITIES・2 DAYS AGO
Life and Style Weekly

‘Sister Wives’ Star Mariah Brown’s Partner Audrey Kriss Comes Out as Transgender: ‘I Am So Happy Being Me’

Sister Wives star Mariah Brown’s partner, Audrey Kriss, came out as transgender in a new statement, revealing they are ready to live their authentic truth. “I just wanted to let you know that I am transgender, and my pronouns are they/them. I’m still going by Audrey,” the Utah resident wrote via Instagram on Saturday, December 4. “I don’t want to hide myself from the world anymore. I am so incredibly excited! I am also scared. I am scared of the hate I’ll receive, the things people I care about will say about me, and violence. As a white, masculine presenting person comes a lot of privilege, and I am still scared.”
CELEBRITIES・23 HOURS AGO
The US Sun

KIM Kardashian and Pete Davidson's romance may be fresh, but the reality star is 'already talking about kids' with Saturday Night Live star Pete Davidson as estranged husband Kanye West remains 'in denial' about their relationship. Us Weekly reported in its latest print issue that the Keeping Up With the...
RELATIONSHIPS・4 HOURS AGO

Following the news of Virgil Abloh's passing, many celebrities took to social media to share their own statements, offering their love and condolences to Virgil Abloh and his family. From Pharrell Williams to Loni Love, see each celeb's heartfelt message.
BEAUTY & FASHION・9 DAYS AGO
extratv

He stepped out in L.A. for TUBI’s “The Freak Brothers” experience at Fred Segal, showing off his svelte figure. The star, who once tipped the scales at 400 lbs., has reportedly lost 200 over the years. John, 69, looked great in a layered look — a blue collared shirt, orange...
WEIGHT LOSS・5 HOURS AGO
TODAY.com

Kim Kardashian West and Kanye West’s son Saint is growing up so fast!. The reality television star and mom of four celebrated Saint’s 6th birthday by sharing a series of never-before-seen photos on Instagram on Sunday. The snaps included pictures of Saint dancing around in a lime green matching set,...
CELEBRITIES・1 DAY AGO
TVShowsAce

RHOSLC fans demand Bravo fire Mary Cosby after her latest racist comments. Find out what she said, plus has Bravo responded?. Another day, another accusation of racism against a Bravo star. In June of 2020, four Vanderpump Rules stars were fired for racially insensitive behavior. Stassi Schroeder and Kristen Doute were fired for calling the cops on co-star Faith Stowers, who is African-American. Newbies Max Boyens and Brett Caprioni were let go at the same time after past racist tweets came to light.
TV & VIDEOS・1 DAY AGO
hotnewhiphop.com

Drake’s 2022 Grammy Nominations Have Been Withdrawn

At the Grammy nominations announcement ceremony a few weeks back, it was announced that 35-year-old Drake had earned himself two nods this year – Best Rap Album for Certified Lover Boy and Best Rap Performance for his Future & Young Thug collab track, “Way 2 Sexy.”. According to Variety, the...
CELEBRITIES・1 DAY AGO
Decider

At just 15 years old, Shields modeled the designer jeans while reciting various lines, one of which was: “You want to know what comes between me and my Calvins? Nothing.” The campaign swiftly became controversial, as the media debated whether she was being over-sexualized (and arguably, reporters sometimes contributed to this themselves).
CELEBRITIES・5 HOURS AGO
Cosmopolitan

In the world of television, it’s customary for actors to snag a prop or two from the set. After all, who doesn’t want a relic from their time on the silver screen? Well over a year after John Stamos’s Instagram reveal, in which he shared with the world that he owns the iconic couch from Full House, we now know what Jodie Sweetin snagged for keeps.
TV & VIDEOS・5 HOURS AGO
Hello Magazine

Ginger Zee loves nothing more than being a mom and recently made the decision to cut back on the amount of photos she posts of her children in order to protect their privacy more. However, the Good Morning America star delighted fans on social media over the weekend after sharing...
FAMILY RELATIONSHIPS・2 DAYS AGO